Dalliance, deceit and dastardly blackmail are all in the air at the rococo palace of Versailles, where the Danish composer Poul Schierbeck's only opera Fete galante from 1931 unfolds its coulorful plot. Schierbeck's opera maintains an exquisite musical balance between the lyrical and the comic, and this recording brings new life to Schierbeck's tuneful music with a strong Nordic singers' cast in front of the Danish National Symphony Orchestra conducted by Michael Schønwandt. 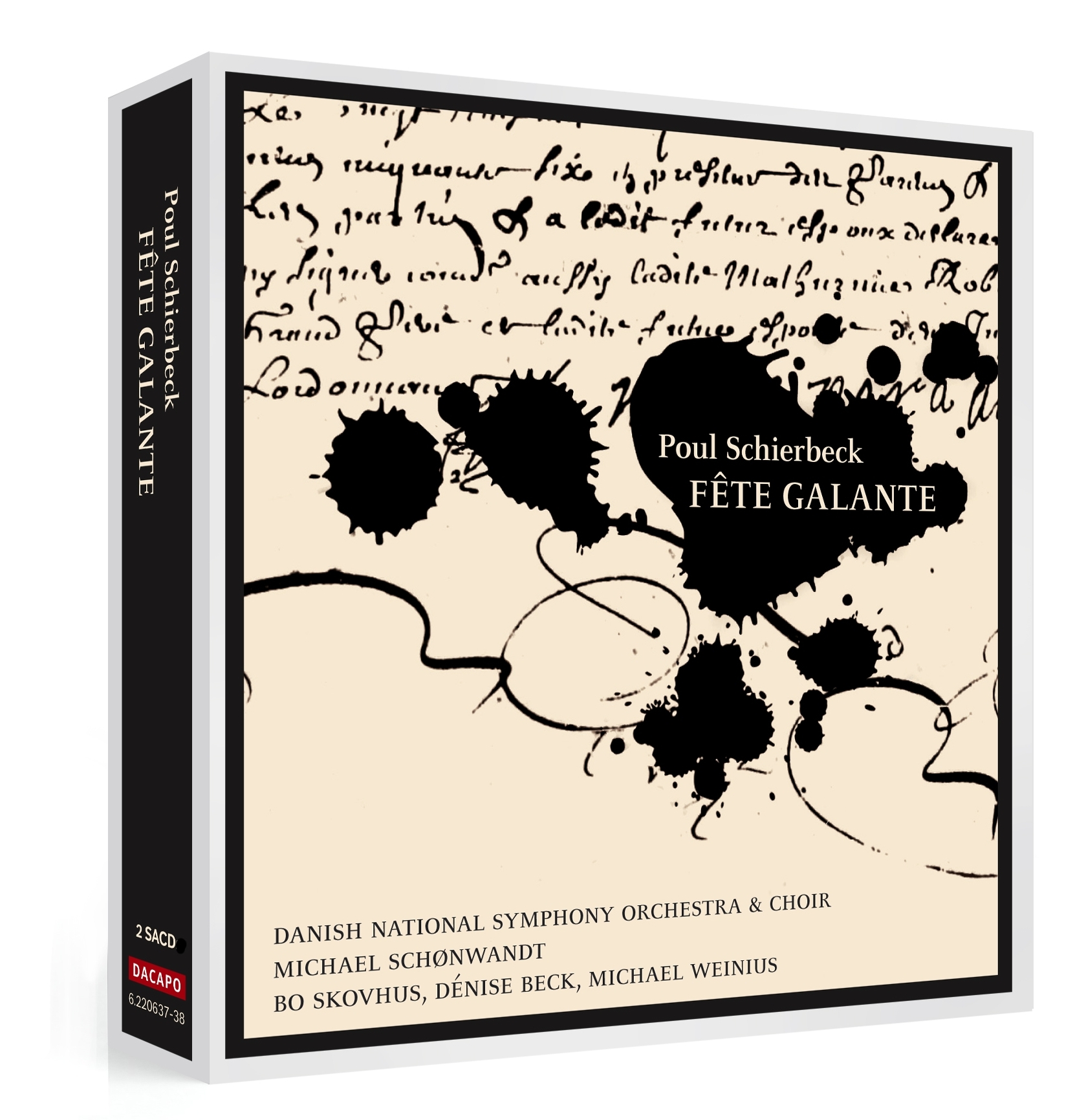 Poul Schierbeck (1888-1949) was born in a music-loving academic home, and after taking his school leaving exam he began studying law. He broke off his education in favour of private music studies with among others Carl Nielsen and Thomas Laub as his tutors. At the beginning of World War I he did his military service as a lieutenant, and in 1916 he was engaged as the organist in Skovshoved Church, where he was active until his death in 1949.

In the years after the war Poul Schierbeck began making his name as a compo-ser, and in 1919 he was awarded the grant Det Anckerske Legat. The same year, he married the opera singer Sylvia Larsen, who became the natural interpreter of the many songs that typify his output. In 1920 the couple travelled together on a study trip to Italy through England, France, Switzerland and Germany, where Poul Schierbeck finished composing his Symphony op. 15, which he had begun before the war.

The symphony was given its first performance in Gothenburg in 1922 with Carl Nielsen conducting, and was repeated later that year in Copenhagen. The next year Poul Schierbeck himself conducted the symphony in Finland. Everywhere the symphony was well received and singled out for its fine orchestration.

This gave Poul Schierbeck the courage to begin work on his next major project: the opera Fête galante op. 25, which is based on a play that the writer Max Lobedanz had sent to Poul Schierbeck in 1920 with a request to compose the stage music. Schierbeck per-su-aded Max Lobedanz to rewrite the play as an opera libretto, and in 1923 he began composing. The work on the opera lasted until 1927, for Poul Schierbeck was in demand from many sides. In 1921 he had successfully composed a cantata for the Copenhagen Uni-ver-sity’s -matriculation celebrations, and it had many successors: a number of cantatas were composed in the 1920s, and after the death of Carl Nielsen in 1931 he became the country’s leading composer of occasional cantatas until 1945, when the inauguration of the Danish Radio Concert Hall was marked with a Schierbeck cantata.

In 1931 Fête galante was performed at the Royal Danish Theatre, and the same year Poul Schierbeck joined the staff of the Royal Danish Academy of Music in Copen-hagen as a teacher of composition and orchestration. A long succession of Danish com-posers from Jørgen Jersild and Leif Kayser to Jan Maegaard benefited from his teaching which, along with Ludolf Nielsen’s private tutoring, helped to raise a traditionally clumsy and provincial instrumen-tation practice to international standards.

The overture to Fête galante was composed some years after the opera was finished, namely for the performance at The Royal Danish Theatre in 1931. It gathers the themes of the opera into a symphonic -sequence where imposing marches alternate with languishing melodies in a fire-work display of orchestral magnificence. It became Schierbeck’s most popular orchestral work and a permanent -element in the repertoire of Danish orchestras.

The opera Fête galante is Poul Schierbeck’s masterpiece and the only one of his music drama works to reach the stage. It was per-formed at The Royal Danish Theatre in 1931 and taken off the bill after seven performances, after which the composer, at the urging of the Theatre, did some revising and tightening-up with a view to a revi-val. This did not happen until 1960, but then Fête galante stayed in the repertoire for a few seasons.

The title refers to French painting of the Rococo era, when Watteau’s pictures of intimate gatherings that staged the aristo-cracy’s flirtatious pleasures in mythological settings went under the general designation of “Fêtes galantes”. The setting for the opera is a ‘wedding feast’ in 18th-century France where a noble libertine pretends to marry a young, innocent girl who in fact loves him with all her heart. With a footman disguised as a notary and a marriage contract signed with an ink blot, our aristocrat tries to seduce the girl, but is interrupted by a theatre director and black-mailer, then by a duel-list, and finally by the unexpected arrival of King Louis XV.

The opera ends, of course, with the triumph of virtue. The nobleman realizes that he not only lusts for the girl, but also loves her. The girl forgives his deception. And Louis XV abducts the theatre director’s accommodating wife in the belief that she is the bride.

Fête galante shares this subject with some of the most popular operas of the early twentieth century: Richard Strauss’ Der Rosen-kavalier and Ariadne auf Naxos, and the portraits of ‘little women’ in Puccini’s operas. But Poul Schierbeck mixes the ingredients in his own way and with great success. The balance between the comic and the lyrical is kept alive by the two dominant female charac-ters, the loving Suzon and the coquettish La Scaramouche.

In the garden room of the young Count René de la Rochefoucauld’s chateau at Versailles his four friends, Saint Lambert, Montmorency, d’Argenville and Lauzannes, await his return. He has fallen in love with a young girl, Suzon, with whom he wishes to celebrate a marriage that very evening – but it is all a sham, since the four friends are to act as formal witnesses and one of the footmen is to function as a notary. All this takes place while the womanizing King is away for a few days; normally he is very strict about enforcing his jus primae noctis with the bride when his noblemen marry. René appears with the unwitting Suzon, who is presented to the four friends who have diffi-culty keeping a straight face. They withdraw, and after a brief love scene the ‘bride and groom’ also leave. When the stage has been empty for a moment, Scaramouche slips into the hall. As he helps himself to the delicacies on the table he introduces himself as theatre director, plotter – and discreet supplier of women to the nobility. He listens at the door behind which the feigned wedding is taking place, and suddenly the door opens and the footman Jean comes staggering out disguised as a notary. Scaramouche cajoles the drunken fellow into giving him the false marriage document, which he is imme-diately afterwards able to show to Suzon, revealing the deception to her. He offers – against suitable remuneration – to furnish it with the signature of a real notary, which will make it legally valid. But she does not believe a word of what he says, and dismisses him. However, a small doubt has been sown in her mind.

A little later in the evening in the same hall. During an extended mute scene prepa-rations are made for the feast in the evening. Scaramouche’s wife, who is a member of his theatre troupe, is initiated by her husband into his plans to capitalize on the false mar-riage certificate. Saint Lambert, Lauzannes and Montmorency enter to find out whether everything is ready for the evening’s theatrical performance, and the last of these in particular falls for La Scaramouche, who is not uninclined to listen to his advances; she invites the gentle-men to attend her in her dressing room – and Scara-mouche has to swallow his jealousy. He meets Suzon, to whom he again offers the marriage document, which he has got a real notary to sign in the interval. They are surprised by René, who drives Scaramouche away. He now confesses to Suzon that their marriage is not valid, but that he loves her, and that before evening she will be his lawful wedded wife. She has not been willing even to cast a glance at the document, and believes that he is only saying this to test her. Scaramouche admits to his wife that he has lost the first round in the battle, but he is convinced that he will win in the end. Suddenly, military music sounds from afar, and Scaramouche -recognizes the King’s regimental music and has the idea of provoking the King into making an unannounced visit the very same evening. Filled with new hope, he sets off to realize his plan as the military music continues behind the fallen curtain.

During the evening feast the Marquis d’Argenville falls in love with Suzon, whose feel-ings for René he considers only superficial. He besieges her with his pleas, but she rejects him. He becomes insistent and violent, and now they are surprised by the rest of the party. Despite the warnings of the other friends, René insists on fighting a duel with d’Argenville, who is a crack shot with a pistol. He sends a servant for the notary, who is to come instantly.

René considers the situation in solitude. He despises himself because he could think of deceiving Suzon and he now wants to stake all on making her his legal wife – also in case he falls in the duel. The servant brings the notary, who after some negotiation agrees to put his name to the marriage papers – only to discover that he has already done so earlier in the day at the urging of another man who paid him to do so. René calls his friends in and has them sign the certificate, which is now legally valid, and makes them promise that they will never reveal his original deceitful intentions towards Suzon, whom he loves. Unseen by the gentlemen, Suzon has observed this last scene.

D’Argenville is called in, and preparations are made for the duel. Just as they are about to shoot, the arrival of the King is announced and he immediately afterwards enters, accompanied by a retinue among whom Scaramouche is hiding. Since the law forbids duelling, they try to pass the whole thing off as a joke. However, the King finds out by firing the two pistols up at the ceiling that they were loaded with live ammu-nition, but he makes no more of the matter. On the contrary, he is a little offended that René has neglected to invite him to his wedding, and insists on seeing the bride. René hesitates, but the resourceful Saint Lambert fetches La Scaramouche, who is presented to the King as René’s wife. He immediately falls for her, and invites her to accompany him to a supper at the chateau, just for a couple of hours – and he doesn’t have to ask her twice. The King goes off with her – while Scaramouche seems once more about to die of jealousy. He tries one last time to squeeze money out of René for the signature on the document, but must be content with the honour of having paid for the Count’s mar-riage contract, and dejectedly leaves the chateau. René thanks his friends for their valu-able assistance. Now Suzon enters; she has at last realized that it was really René’s plan to fool her from the beginning, and she tears up the document. The three gentlemen pick up the pieces and quietly sneak out. René begs Suzon for forgiveness, and in a major duet they are reconciled and walk out together. Once the stage is empty, the three friends come in with the notary, carrying the pasted-together document. They place the paper on the middle of the writing table between the two candelabra, bow to it reve-rently and exit laughing.