The composer Niels Marthinsen (b. 1963) belongs to a generation grown up with comic books, superheroes and science fiction, and Marthinsen welcomes all of these phenomena into his symphonic music. This recording features his Snapshot Symphony (2009), two of his special opera trailers and the ingenious Concerto for Three Trombones and Orchestra “In the Shadow of the Bat” (2009) – all in the hands of the Aarhus Symphony Orchestra conducted by the legendary trombone player Christian Lindberg. 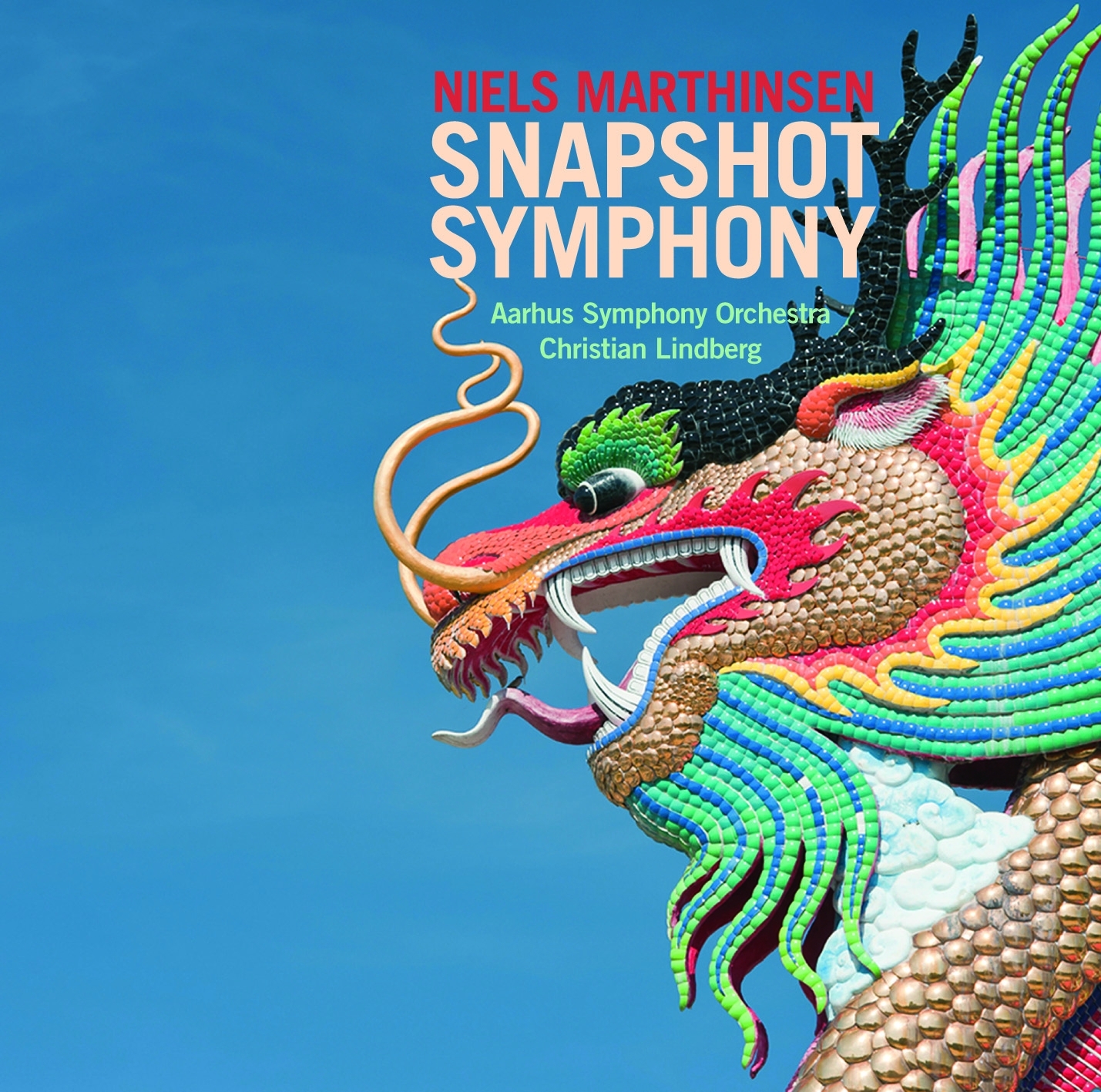 Niels Marthinsen and the fantastic universe by Jens Cornelius

The energetic, constantly surprising Niels Marthinsen belongs to a generation that has grown up with comic books, superheroes and science fiction - and refuses to let go of these fantastic universes. Pop culture is part of Marthinsen's ballast along with the whole legacy of classical music and the avantgarde culture he has learned at the Royal Academy of Music as a pupil of Denmark's finest composers.

Beethoven doesn't make Batman superfluous, and you can like both Richard Strauss and karate films. For as Niels Marthinsen has demonstrated, pop culture can renew classical music. Not by banalizing art to pop, but by acknowledging the cultural references of people of our time.

Niels Marthinsen's inclusive attitude is based on impressive technical mastery and great compositional energy. And if anything is feasible, it would be arrogant not to exploit the possibilities.

There isn't much you mustn't do in my music,\ he says himself. Taboos are breached time and time again in his works, and the pleasure of doing it shines out clearly. If Marthinsen is today one of Denmark's most frequently performed contemporary composers, it is because of his ability to communicate powerfully and directly. \\Not all art is intended for a wide audience\\, Marthinsen explains. \\But when I write opera or music for symphony orchestra, it's crucial that my music appeals to many people. It's showtime, and I like it! Otherwise you don't get away with aiming at the back row.\\

Niels Marthinsen's love of pop culture reaches new heights in his Symphony no. 2, Snapshot Symphony. It is a fantasy trip to exotic regions as Niels Marthinsen knows them from film, TV and the Internet. A modern variant of the Romantic idea of unattainable horizons that are at least as good in dreams as in reality.

The old Romantics knew these faraway lands from novels and beautifying oil paintings. Today our mental images are fed by the electronic media. Niels Marthinsen, who in his own words lives \\a shockingly ordinary life\\ with wife and children in a suburb of Copenhagen, could easily have visited the exotic tropics in reality but doesn't miss it, after all the impressions he has received from the Internet, film and TV. The ‘artificial' glimpses are also valid glimpses.

\\I've never been in Mexico and Arabia, and certainly not in China,\\ explains Marthinsen. \\But I love the sounds of these countries that I know from Hollywood and pop culture: when Clint Eastwood rides ‘south of the border', when Disney's Aladdin and Mulan take me along to the Orient, when Arab pop blares out of the windows of a ghettomobile... and bullfight trumpet music, the sound of acrobatic mayhem from John Woo's Hong Kong karate virtuosi and so on: powerful images on the retina and eardrum.

\\The memories of this ethno-pop film music have become a symphony on my inner eardrum. The symphony is a huge slide show of musical snapshots from my mental journey into western pop culture's versions of three exotic places: Mexico, Arabia and China. The musical idiom is my own, the melodies come from out there. I use all the devices of the new pling-plong music (as well as a few I've invented myself) to create a fantastical, modern orchestral sound where lots of tunes from either east or west play together, interweaving in various keys and at various speeds, all held tightly in place by a living, dancing pulse.

\\The symphony is in three movements. Fiesta Mexicana is a red-hot, chili-pepperish mariachi mosaic - Mexican party music staged at an ever-accelerating tempo, mixed with potent bullfighter fanfares. Arabian Nights takes place on the outskirts of a big Arab city when darkness falls; where the desert begins and the city stops. The ancient music of the sands of Arabia mixes with belly-dancer music and the modern Middle Eastern pop that gradually takes over when the starry night gets too cold to be out in. Great Fireworks in China is precisely what the title says: a giant firework display of Chinese melodies in a virtuoso high-octane orchestral paint-box: flaming dragons, aerial bombs, incandescent volcanoes, white snakes and fantastic lucky rockets that scare away the evil demons. The three movements can be played separately. But they belong close together, for alongside the melodies from the exotic countries there's a music that comes from inside my own head, and which is developed all the way through the work: images of something more personal, like expressions on the faces of total strangers in a holiday snapshot showing feelings you recognize in yourself.\\

Batman has turned out to be one of the most enduring superhero figures. Since the fairly primitive stories in the 1950s and 1960s, new writers, artists and film directors have deepened the themes in this modern folk tale. And now Batman has his own classical instrumental concerto! A work that follows on seamlessly from Marthinsen's treatment of the monster films in his first symphony from 2005, Monster Symphony.

For the uninitiated: Batman is a superhero who lives in the New York-like metropolis Gotham City and battles the underworld's evil and brilliant criminals. Batman's worst enemies, who after decades of defeats by the superhero still invent new threats, are the Joker, Two-Face and the Penguin; psychopathic adversaries each with his own deformity and sadistic inventiveness. All three appear in Marthinsen's unusual triple concerto for three trombones and orchestra, In the Shadow of the Bat from 2009.

\\A central idea of modern versions of the Batman myth is that Batman is created by the fantastic villains that he fights, and they are created by him - and that Batman is driven by revenge and hate, barely held in check by an intense sense of justice. Batman represents ‘the dark side' while the villains are hyper-imaginative, colourful, creative characters who happen to be completely insane,\\ explains Marthinsen.

\\The concerto begins with the creation of Batman: an eight-year-old boy persuades his parents to leave an opera performance before it is over; outside in an alley they are shot and killed by a criminal while the boy watches. And he decides that all criminals must be punished!

\\Then follows the Villainous Fugue: a multi-part fugue-like exposition of villain -motifs and stylistic environments. It is the exposition of the Joker (alto trombone), Two-Face (tenor trombone), and the Penguin (bass trombone). And after a brief and very slow interlude where the three criminals form an alliance and make their plans, the Toccata of Crime begins: bright, fast-moving, highly energetic, expansive and colourful music, still dominated by the soloists. But later the orchestra moves to centre stage with slow, ominous, swooping bat-music that climaxes as the soloists are defeated by the orchestra.\\

In recent years Niels Marthinsen has been much acclaimed for his operas, some of which are meant for small venues and productions, whereas others are works on the grand scale. And he has revived the old idea of orchestral works that are based on material from the operas.

\\Contemporary operas usually wither after the first season, so the focus is on getting people to come and have a sniff before it's too late. Consequently it seemed an obvious choice for me to start making orchestral excerpts from my operas that are meant to be played before the premiere (and afterwards, please). I call them ‘opera trailers' when they're substantial enough to be considered independent works, and ‘opera demos' when they're relatively short and more appetizer-ish.\\

One of the demos is for Marthinsen's chamber opera The King of Utopiaville, which was already controversial before the premiere in 2009. The plot (with a libretto by the journalist Georg Metz) bore striking resemblances to a recent scandal from Danish politics where the neoliberal mayor Peter Brixtofte's pursuit of a happier society led to gross lawbreaking, fictive economics and a huge increase in the mayor's own consumption of claret. Many people have therefore viewed The King of Utopiaville as a \\Brixtofte opera\\. At the premiere this was partly denied by the composer, who said that the opera is also his private forgiveness for having had to grow up in a home typified by alcohol abuse.

Marthinsen describes the opera as \\a sort of a mix between a reversed revolutionary opera (reversed because it's about a revolution that flops) and a rhythm'n blues theatre concert.

\\The opera takes place on the remote tropical island of Honga-Tonga, where a mayor from Europe is taking a much-needed holiday as far away as possible from his home town Utopiaville. Honga-Tonga couldn't be any further from Waikiki Beach: it looks something like the 1933 version of King Kong, and the mayor's excessive entrepreneurism blossoms: he is about to create a new Utopiaville.

\\The Utopiaville demo gives you in quick succession a glimpse of Honga-Tonga scenery (dark and scary jungle), the mayor's song about wine (Chateauneuf du Pape, Gevrey-Chambertin, Baron Rothschild, and so on), and finally the climax of a scene where the mayor, at the height of his powers, and still only on the fifth bottle of wine, explains the benefits of his version of liberalism to the natives and their stately and very womanly queen.\\

On the basis of his latest opera Snow White' Mirror from 2010 Marthinsen has created a three-movement opera trailer. Snow White's Mirror is a modern interpretation of the oldest type of pop culture: the folk tale.

\\Snow White is a self-centred teenage narcissist and the villain of the opera; she ends up losing everyone but herself, either because she kills them, or because they decide they can't stand being around her any more. But apparently she's OK with that...

\\The music is intended for a wide audience: it's basically pop music done with all the craftsmanship of a classical composer who's equally at home with large-scale symphonic form, avant-garde technique, opera singing - and modern pop.

\\The trailer is in three movements. It contains three sections of the opera: the prelude, an interlude close to the beginning of the second act, and the final scene but one. It's a gloomy sort of trailer, starting out in grand title-sequence style, moving on to a decidedly odd piece where Snow White finds her way to the dwarfs (who're creepy junkies doing pornography to get money to buy dope), and ending in kind of an eerie rejection mood: everyone still alive walks out on Snow White, singing ‘skin as white as snow, hands red with blood, soul as black as ebony'.\\