At the age of just 23 Kasper Thaarup won the position as solo trombonist in the Danish Radio Sinfonietta. On his recording debut Circles he unfolds his talent in front of 'his' orchestra, grappling magnificently with contemporary Danish music in the widest sense. With a couple of pure solo works by Bent Sørensen and Bent Lorentzen as bold centrepieces Circles offers music by veterans like Per Nørgård and Ole Schmidt as well as their somewhat younger colleague Peter Bruun. 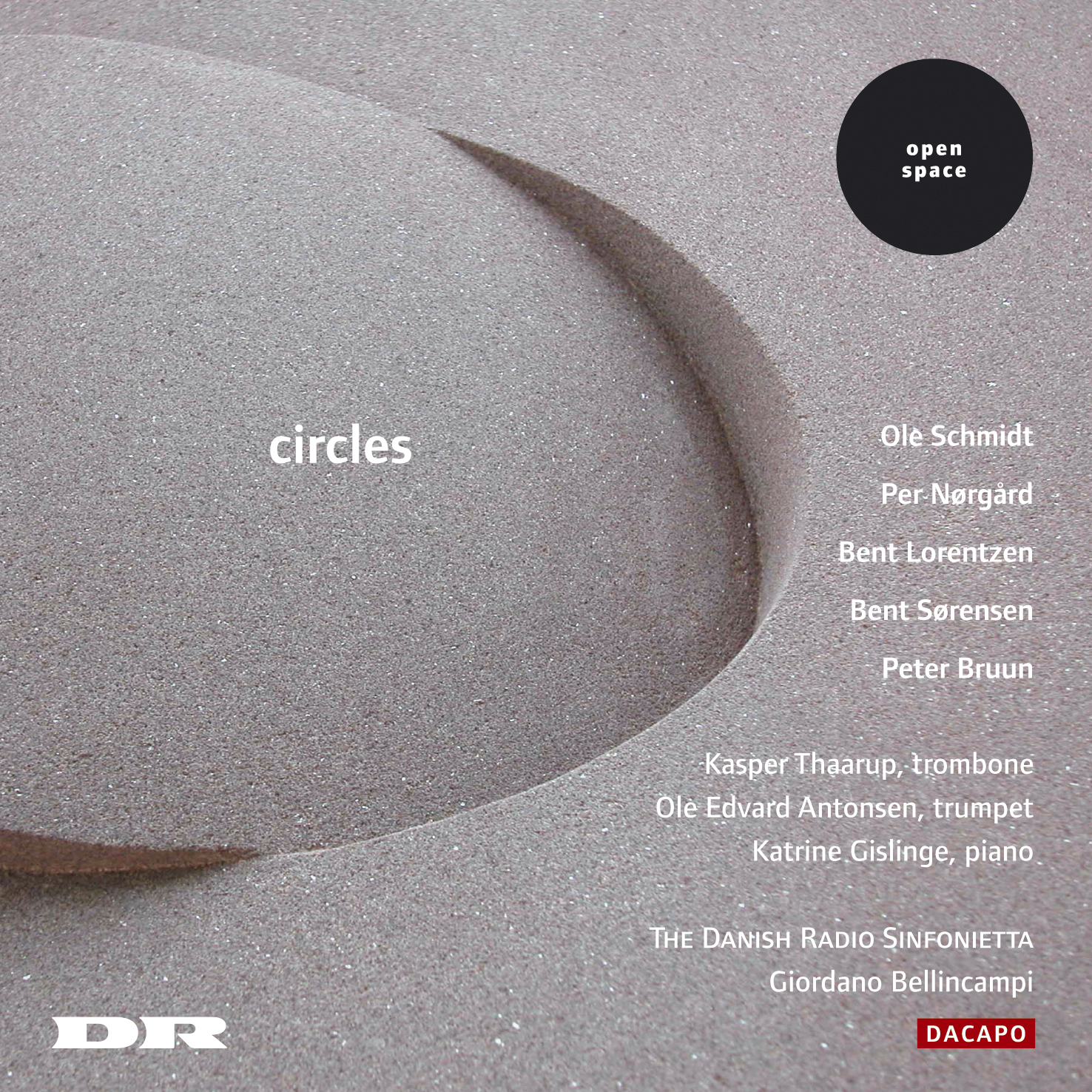 The trombone as soloist

As a very young man Ole Schmidt was a jazz pianist, but he later established himself as one of Denmark's most successful conductors of the post-war era. At the same time he has himself composed a wide range of works.

With its combination of rhythmic energy, concentration, elementary expressiveness and immediate accessibility, Pièce concertante is highly characteristic of Ole Schmidt's music. While the two brass instruments have a prominent role and extensive solo passages, especially towards the end of the work, this is just as much a concertante work where, for long passages, the whole small orchestra takes centre stage.

Apart from the brasses, the ensemble in the work is identical to that of Béla Bartók's Music for String Instruments, Percussion and Celeste from 1936. This work does in fact appear to have been an important source of inspiration for Ole Schmidt's composition, not only in the soundscape, where the piano is often as salient as the brass, but also in the exuberant polyphony and the flexible rhythms with frequent shifts between different bar lengths.

As for the solo instruments, it is particularly their similarities - but also their differences - that the piece works with. Their common acoustic starting-point as brasses is an obvious shared feature, but their differences in attack and compass gradually become evident too, both when they play together and when they take turns developing the same musical material. At the same time, collectively and individually, they stand out strikingly from the at once compact and transparent sonority of strings, harp, keyboard instruments and percussion.

The pawky philosophical humour that sometimes rears its head in Per Nørgård's music should not be underestimated. InIt's All His Fancy, That it quite simply cannot be ignored. In recent decades Nørgård has been greatly preoccupied by musical time and not least the experience of tempo and motion at many levels. This is very true of this work, which has borrowed both its title and the subtitles of the individual movements from Lewis Carroll's books Alice in Wonderland and Through the Looking-Glass (published in 1865 and 1872 respectively), in whose surreal fairytale universe no one and nothing are quite what they seem - and where no one moves as one expects either.

But among the Alice titles and quotations in the score there are also references to several other sources of inspiration. The fifth movement, for example, in its sub-subtitle ‘Stravinsky v. Chopin',  makes a direct link between on the one hand Lewis Carroll's song of the battle of the Lion and the Unicorn, which is in fact sung by the two brass soloists, and on the other hand two of the great composers of the past who worked most in their music with the experience of time. In addition the movement was explicitly launched into the world with greetings to Douglas Hofstadter\, the American cognitive researcher whose bestseller Gödel, Escher, Bach has time and consciousness as a recurrent theme (and whose two main characters, the swift Achilles and the slow Tortoise, lent their names to a Nørgård piano work of the 1980s).

But although the music explores subtle combinations of rhythmic layers among the instruments, it also leaves a great deal of freedom to the performers. Passages can be repeated at will, the music may be electrically amplified or not, and some of the musical elements can be included or omitted. On the whole the music provides plenty of scope for experimenting one's way to one's own experience of time.

Bent Lorentzen is one of the living Danish composers who has worked most with music drama, in both large and small formats. On top of this, scenic effects and explorations of the potential of the instruments as actors often play an important role in his instrumental music, and Circles is no exception.

To begin with, the various sound-resources of the trombone are in focus. There are short, circling staccato figures over wide intervals with lots of interpolated rests. There are sudden effec-tive glissandi or emphatic, abrupt one-off attacks. Or there are ticking scale runs or song, breathing, screaming or panting into the mouthpiece. Gradually the playing techniques are mixed together more and more, and the same pitches or melodic figures begin to alternate between different ways of playing, where not least the glissandi become more and more dominant at both the bright and the dark pitch.

At the end of the work the movement from the conventional music of the beginning into not only theatre, but pure mime, is completed. Instead of playing on the trombone the musician moves it in various prescribed patterns, while only alternative, noise-like uses of the voice are left, and in the last bars even only the breath itself.

Through many of Bent Sørensen's works runs the sense of something hidden, of an underlying narrative and many remote prehistories that are much greater than the sum of the delicate, refined details, quiet suggestions and intangible movements of which the music is to a great extent built up. Although most of Bent Sørensen's oeuvre consists of instrumental works for chamber ensembles, it is to a rare degree dramatic music that makes him one of the most striking Danish composers of recent times - precisely because much of the drama is often kept below the surface.

And this is the case too with The Bells of Vineta.The literary inspiration for the work is a central topos in Scandinavian literature - a hidden universe that becomes visible; the story of the city of Vineta, found in the Swedish Nobel Laureate Selma Lagerlöf's novel The Wonderful Journey of Nils Holgersen - the enchanted Vineta off the coast of Gotland, which sank into the sea and now only rises up once every century.

As so often with Bent Sørensen, this is extremely quiet, slow music. It is one of his few works for solo instrument. On the other hand it provides rich oppor-tunities to experience his profoundly original and subtle art of instrumentation in its purest form.

The experience of a different reality behind the immediate surface of the music is present from the outset, inasmuch as the trombonist must for long stretches sing harmonies with his own playing. This results in a strange timbral and melodic parallel world where one can never quite agree with oneself -whether the faraway bells one thinks one hears are real, or are only something one imagines sinking away below the surface of the sea through long sliding notes.

At an early stage Peter Bruun developed one of the most distinctive tonal idioms among the younger Danish composers with an aesthetic that to a decided, even remarkable degree is more focused on sensuality, structure and movement than on conflict or confrontation. While the music is influenced by his teacher Per Nørgård's luxuriant, sophisticated soundscapes, at the same time it focuses, as far as the choice of material and musical events is concerned, on concentrated, harmonically and formally simple processes.

This is also the case in Twelve to Remember, Twelve to Come, which rather resembles a long, slow, three-movement meditation on just a single recurring chord-change. The orchestra sets the scene with delicately shifting instrumental timbres and many polyrhythms while the solo trombone holds forth above it. Rather than a traditional solo concerto with its dynamic interplay of soloist and orchestra, this is a solo development with orchestral underlay, almost like that of a jazz soloist with a backing group. With the associations of Spanish and Latin American music immediately evoked by the basic harmonic phrase, this makes Miles Davis' and Gil Evans' jazz classic Sketches of Spain a reasonable comparison if not a direct source of inspiration.

Post Danmark is primary sponsor for The Danish Radio Sinfonietta