On this new Dacapo Open Space release, the acclaimed Danish Horn Trio brilliantly displays three of today's leading Danish composers' work with the horn trio phenomenon: Poul Ruders, Pelle Gudmundsen-Holmgreen and Søren Nils Eichberg. All three composers on this CD clearly nod to the genre's legacy by Brahms and Ligeti, and all are profoundly inspired by the transparent soundscape of the three fundamentally different instruments - one bowed, one blown and one struck. However, there are no direct lines connecting the three composers. ach is a distinctive artist who likes to speak with a clear, assured voice - in his own mother tongue. Thus the horn trio becomes a medium through which we can sense varied facets of Danish and international musical history. 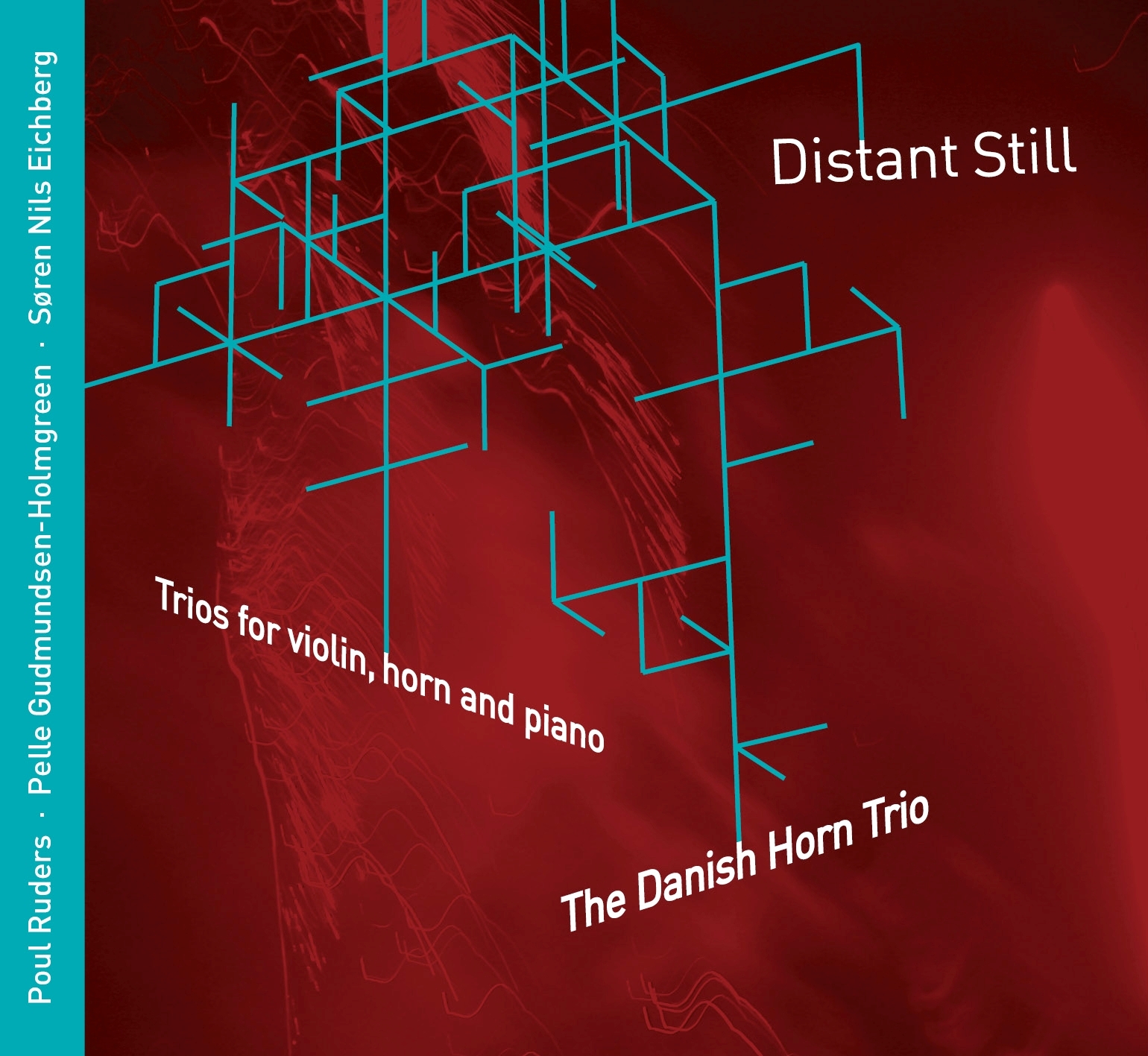 Generally speaking, French horn, violin and piano have never been the favourite instrument combination of the composers. For some reason the great majority have chosen the magnificence of the cello over the delicacy of the horn in the piano trio; and yet two of the most significant chamber works are horn trios: Johannes Brahms' from 1865 and György Ligeti's from 1982 which, as a tribute to Brahms, came to mark a new departure in the Hungarian's music.

No horn trio without the legacy of Brahms and Ligeti - and indeed all three composers on this CD clearly nod to the two classics. Poul Ruders re-uses both the movement structure and a string of melodic fragments from Brahms; Pelle Gudmundsen-Holmgreen works with the expansive, transparent trio soundscape like Ligeti, while Søren Nils Eichberg borrows features from his first subject.

Three of the most distinctive Danish composers work with the horn trio phenomenon on this CD. Pelle Gudmundsen-Holmgreen and Poul Ruders have held their heads high on both the Danish and international music scene for the past 50 and 30 years respectively, while Søren Nils Eichberg entered the lists at the age of 28, when he won the Queen Elisabeth Competition with his violin concerto in 2001. Since then he has established his name firmly and in 2010 began his association with the Danish National Symphony Orchestra as composer-in-residence for a three-year period.

However, there are no direct lines connecting the three composers. Each is a distinctive artist who likes to speak with a clear, assured voice - in his own mother tongue. Thus the horn trio becomes a medium through which we can sense varied facets of Danish and international musical history. A history that ranges from Gudmundsen-Holmgreen's minimal, almost meditative soundscape with roots in the development towards the free tonality of the 1960s avant-garde; through Ruders' stark juxtaposition of four utterly different movements that remind us of the uninhibited borrowing of genres and styles in the 1970s; and it ends (for the time being) with Eichberg's revitalization of classical-romantic virtues such as melodic development and contrasts in tempo and character formulated with accessible rhythms, a simple pulse and an expressive harmonic language. Not far, in fact, from Late Romanticism's mighty surges on the verge of a world's collapse. Avant-garde tonalities, late-modern genre freedom, and neo-Romanticism - all presented by the Danish Horn Trio moving in an easily comprehensible balancing-act through a transparent soundscape of three fundamentally different instruments - one bowed, one blown and one struck.

Poul Ruders' horn trio from 1998 is quite simply called ‘Horn Trio', and is the longest work on the CD. With its four essentially different movements lasting just under half an hour, it is a whole study of the possibilities of the three instruments, both together and separately. The movements sound in their own right like small independent works, each with one simple, quite crucial characteristic. Alongside one another, though, they constitute a contrastful form not unlike the pattern of a classical symphony. Just in a slightly different order. As with Brahms, they are presented in a slow-fast-slow-fast sequence, and each movement begins with a theme where the naked ear can trace the kinship with Brahms' ‘sister' movement.

In the slow first movement, ‘Alpha', Ruders introduces the three voices with stoic calm and a simple pulse, where the notes draw the contours of a flickering tracery - as if everything is coursing along the wires of a sieve in motion. The second movement, ‘Diadema', the jewel, is much faster and more zingy, like a little high-speed joke, while the third movement's ‘Dilemma' comes in at yet another angle, with the horn in the absolutely leading role. This little golden solo weaves an uncertain, romantically remote sound world with notes that slide and bend and stop in the middle of the familiar steps. It sounds a bit like a classical solo cadenza, where the musician sounds out the limits of the instrument before the intense finale. For that is what we get as a conclusion. With a fluid transition from the third movement, and with a much more self-assured and insistent attitude. Right at the end the delicate slowness of the beginning of the work returns as the arc segment that completes the full circle in accordance with the ancient Greek name given to the movement - ‘Omega', the ‘big O' that is both end and beginning.

In Pelle Gudmundsen-Holmgreen's ‘Near Still Distant Still' from 2005 it is the violin, not the horn, that is at first allowed to spy out its own territory. In the first movement of the piece, which takes up as much time as the other two movements together, the piano and the horn are only permitted to appear as mechanical, simple colourings of the violin notes. The drama, if we can speak of such a thing in this quiet, searching music, arises when the violin changes its playing technique from a reedy sound to full vibrato on a -single note, hammering in small, really fast but unprepared decorations, when the violinist plucks the strings together as on a banjo or slides down from high notes. All things that take place in a slow, meditative tempo where everyone can hear what is happening in the three instruments and presumably also has a good idea of where this is all going.

This kind of serene beauty of sound is succeeded by another type of simplicity in the brief second movement. A myriad identical entries from all three musicians dovetail into one another in a latticework of events always pointing forward to the next bar. Were it not for the rather dizzying rhythmic development, it would greatly recall mechanical rock music - but for acoustic instruments. In that case the last movement would have to be understood as acid rock. The three instruments play some loose, laid-back figures while the violinist accompanies the glissando violin entry with the speaking voice. Mostly with the word ‘yeah', but also with sound like ‘pth', ‘sh' and even a ‘nå' (Danish for ‘oh, really?') in a string of laconic comments. At one point it all starts over again, until it ends by simply ebbing out with a couple of melancholy minor chords.

Gudmundsen-Holmgreen has thus succeeded in creating an ambivalent world which, with the composer's peculiar humour lurking in the background, alternates between fine, small sound sculptures which in themselves are simply beautiful to listen to - and more mystical passages where one can hardly help smiling at the man's successful attempt to pull the carpet out from under his own solemnity. Yeah!

Eichberg's trio from 2007 - whose title, like Ruders', reveals nothing more than the configuration of the ensemble - is a third, quite different ball game. As in a really Romantic work, he begins with a slow introduction with the playing instruction ‘majestic'. A flurry of dramatic, descending piano chords and an expressive melody in violin and horn with large intervals between the notes. Like Ligeti's. After which it all goes over hill and dale with a series of different episodes, each of which has a small rhythmic motif as a characteristic feature. The descending chords and the first subject return again and again, and since there are no breaks between the four movements, you quickly get a sense of ‘music in episodes'. True, there are four movements with the titles ‘Fast', ‘Song', ‘Scherzo' and ‘Fast', but this seems mainly to be to help the musicians find their way around. In each movement there is something characteristic that corresponds to the title - for example a simple, progressively singable melody in the second movement and a diabolical little violin theme in the third movement - but the music quickly develops further from the original expression of the movement.

At the overall level the episodes grow more and more dramatic and nervously trickle out strong contrasts, until it all ends with a very small, triumphant statement after just under 20 minutes of constant activity.

And the way this happens is just as classic. At first Eichberg presents a good deal of diversified material that he then freely returns to and plays with in the coming sections. So the further one gets in the music, the more familiar the various building-blocks become - and then, steadily and calmly, the music comes to make up a meaningful totality of both part and whole. In the nineteenth century one might have compared the development of the music to the growth of a beautiful plant. Where the proportions are maintained so that the small elements and the large one they come to form, are in beautiful accord. But Eichberg is not writing 19th-century music. For that the music is far too rhythmically oriented and far too unconventional in its many shifts.