Per Nørgård's 3rd Symphony was composed in the years 1972-75 and was premiered in 1976. It immediately attracted much attention and has been performed several times since. The work is a summary expression of the new world of musical experience the composer began to work in from the late 1960s. Twilight refers to American anthropologist Carlos Castaneda's famous books on Mexican wizard Don Juan: "The world is a mysterious place," said Don Juan, "especially at dusk." 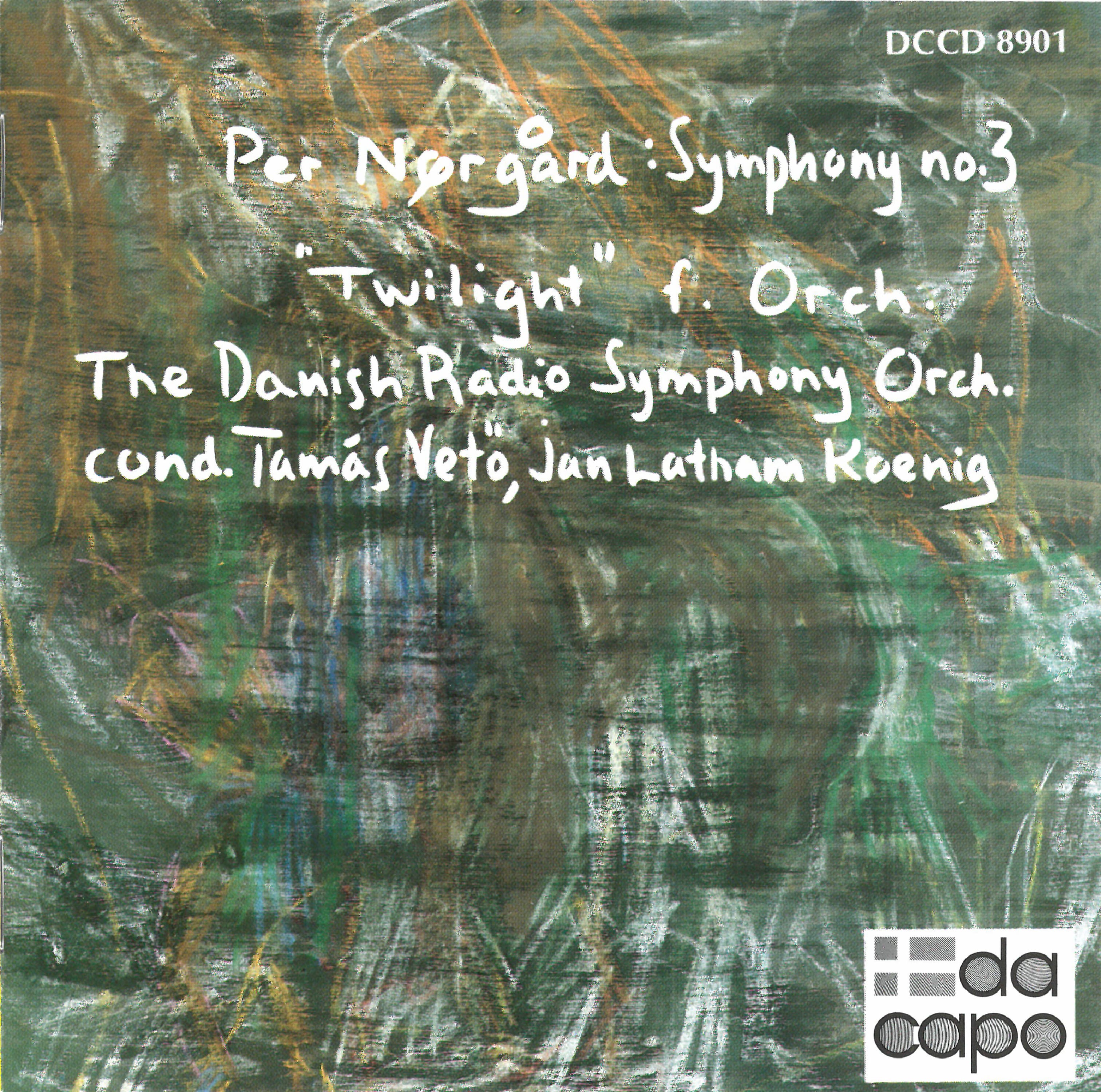 Get 60% discount on Dacapo's early catalogue

Per Nørgård: Symphony No. 3

Per Nørgård's Symphony No. 3 was composed between 1972 and 1975. It was first performed in 1976, and received wide attention. It has been performed several times since the premiere. The work gives comprehensive expression to a new realm of musical experience which the composer began to explore toward the end of the 1960's. While the first period in Per Nørgård's production in the 1950's represents his personal interpretation of the Nordic music tradition - evidenced for example in the Second Piano Sonata (1957) and in "Constellations" for string orchestra (1958) - and in the second period, the 1960's saw him working with serial technique, musical collage and a new sound-pallette - especially in the orchestral works "Iris" (1966-1967) and "Luna" (1967) - with "Voyage into the Golden Screen" for chamber orchestra (1968), Nørgård arrived at a new compositional technique, based on the use of special form of a so-called "infinity series" which he also had used earlier.

The infinity series is a specific principle of musical motion that can be applied to both the chromatic and the diatonic scales, and it is characteristic of Per Nørgård that he specifically chose to cultivate the latter possibility. This is already evident in the mythological opera "Gilgamish" (1971-1972). (This work and those mentioned above are all available on records. Thus the Symphony No. 3, begun directly after the opera, unites the infinity series, major and minor scales, the partial series of natural harmonics and "subharmonics" (Nørgård's terminology) and rhythmic patterns based on the proportions of the golden section, in a nexus of synchronous yet disparate elements which serve the composer's vision of musical coherence. The works which follow the symphony - among them the operas "Siddharta" (1974-1979) and "The Divine Tivoli" (1981-1982) and the "Symphony No. 4" (1981) - usher in a fourth period in which inspiration from the Swiss "rebel" outsider artist-poet Adolf Wolfli is becoming dominant, although the basic experiences of the former periods cannot be said to have been abandoned.

In view of this development, one might well ask if the term "modern music" is at all applicable in describing the Third symphony.

Of course, the work is modern in the sense that it is responsive to the contemporary cultural and musical climate, but the symphony is neither polemic, extreme nor out of touch with the traditional musical vocabulary. The work has its own wholly distinctive form, but it is at the same time sustained by a perception of organic coherence which reminds of Goethe. The intent is to show a world in growth, balance and interaction - an interaction between emotion and understanding, and between ascending and descending forces. A comparison of the introductions to each of the two movements bears this out: in the first bars of the work the music moves upward, while in the introduction to the second movement it moves downward.

The first movement consists of an introduction in two parts followed by two larger main divisions. In the introduction, the harmonic and melodic subject matter is presented and then followed by the rhythmic exposition, in which regular, metrical rhythms yield to rhythms based on the golden section. The first main division builds on a six-voice melody derived from the infinity series, with each voice playing the same melody at different speeds and in indifferent keys, each of these keys being built upon a specific harmonic partial. The second main division utilizes the same structure, which is first expanded to an almost pointillistic soundscape and then compressed into coherent, flowing melodies.

The tendency of the first movement is toward the integrated and general, while that of the second movement, up to the final chorus, is of a more diversified character. It proceeds stylistically within a very broad spectrum, showing in the course of the movement how Norgard's principles of composition can approach a traditional variation or a passacaglia form, producing sections which remind one of Latin American rhythms and then give way to "torn" sounds, only to be followed by an almost classically transparent section in the major with words from medieval songs to the Virgin. This peculiar musical vocabulary is consistently maintained: multiple polyphony and independence among the individual voices - a polyphony that remains non-imitative throughout the work. In the final, summarizing section, which brings the chorus into the aural foreground, Rainer Maria Rilke's "Singe die Carten" from the "Sonnets to Orpheus" (1922) can be heard, 6 and toward the end, a quotation from Schubert's song "Du bist die Ruh" emerges from the musical structure itself. The words of Rilke's poem may also convey an impression of the musical idea behind the work:

In Castaneda's famous book on "Don Juan", the Mexican Yaqui-sorcerer, Don Juan is quoted for this saying: The world is a mysterious place ... especially at twilight. The title "Twilight" refers to an ever recurrent feature of this orchestral work, namely that one orchestral, melodic idea is culminating at the same time as another idea is dawning - or vice versa. To clarify this "rhythmical twilight" as much as possible, a dancer may express one layer of melody or another - not as a "ballet", but as a "visual rhythm".

Cover painting by Per Kirkebye: "Blackboard" (1977)
Cover painting sold by Kunsthallen, auctioneers of paintings and fine arts, on November 28, 1988.