The Danish Golden Age in the first half of the 19th century is known as a period with an abundance of artistic expression, famous talents such as Hans Christian Andersen, Søren Kierke­gaard and early Romantic composers like C.E.F. Weyse and Niels W. Gade. But according to the British choral director Paul Hillier, we can in fact speak of a continued ‘ Golden Age’ for Danish choral music today – which is why this collection of Hillier’s Danish Golden Age jewels with Ars Nova Copenhagen includes Classical and Romantic works as well as music from the subsequent generations right up until our own time. 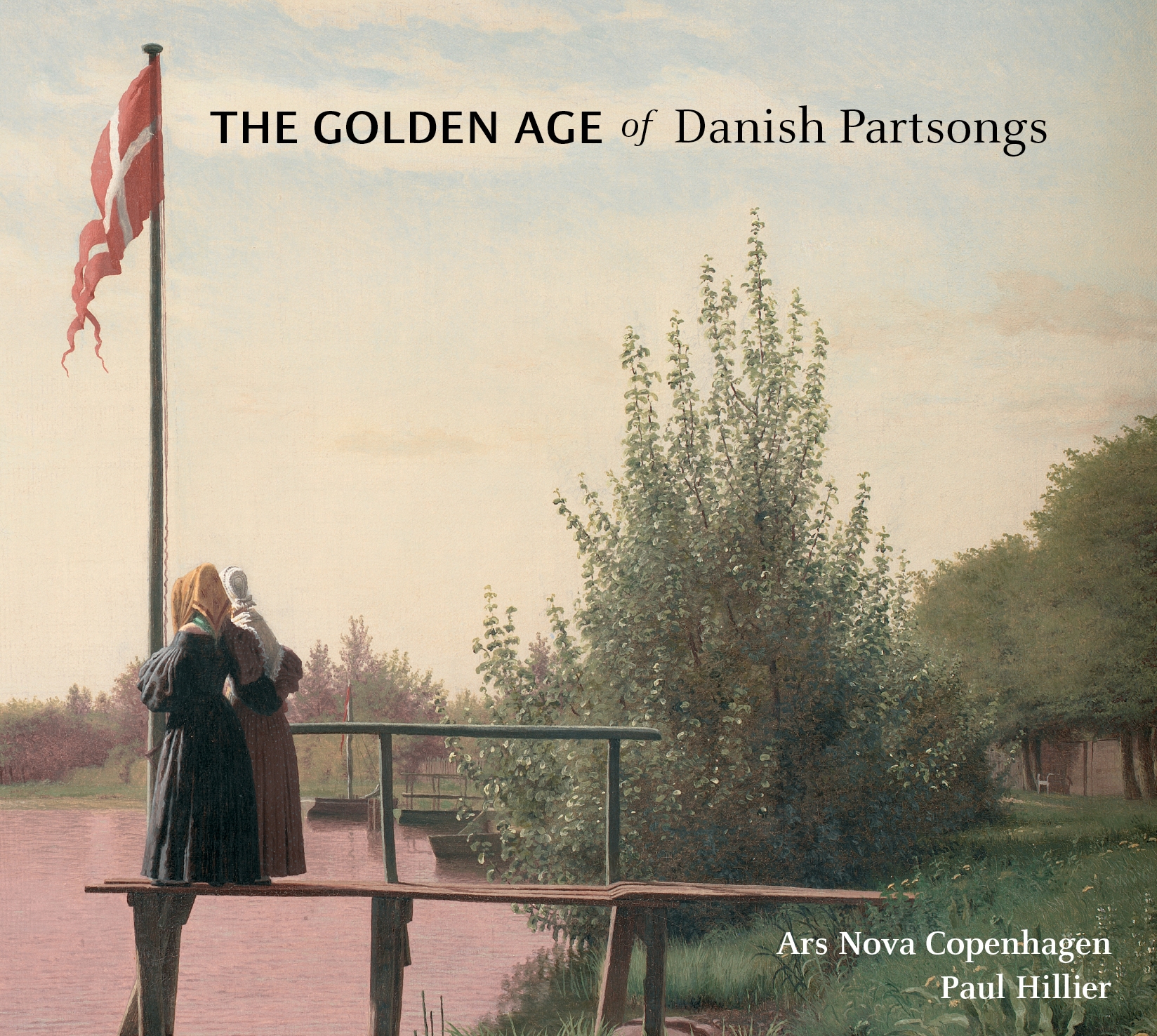 A golden age that continues
“The Danish Golden Age” is what we call the period of cultural and intellectual life in Denmark in the first half of the nineteenth century; a period when the national identity developed into a foundation that can still be clearly felt today. It was a period with an abundance of artistic expression, and names like the poet Hans Christian Andersen, the philosopher Søren Kierkegaard, the painters Købke and Eckersberg, and composers like Gade and Weyse, defined a whole era.

The world-famous choral conductor Paul Hillier, who has been chief conductor of Ars Nova Copenhagen for the last ten years, has performed several Golden Age works, but believes we can still talk about a continued “Golden Age” for Danish choral music. This collection therefore also includes works from the subsequent generations, right up until our own time. And there is plenty to choose from – this is only a first selection from the great riches of Danish choral music since its Golden Age began.

Folk music – genuine and imitated
A major theme in the Golden Age was the hunt for the national identity, and people dug deep to find it in its purest form. In 1814 there appeared for the first time a songbook with old Danish songs and ballads; it set off reactions similar to those the first time a dinosaur skeleton was exhibited: people were fascinated by the prehistoric specimens but were not quite sure what they were.

In the course of the nineteenth century scholars and musicians worked their way towards an understanding that was to leave its mark on Danish culture well into the twentieth century. The first great manifestation came in 1828, when the musical drama Elverhøj (The Elf-Hill) was written for a royal betrothal feast. The theatre had specified that folk-song and ballad melodies were to be used to “suggest the national and local character of the play”. By roundabout paths the job ended up in the hands of the Ger-man composer Friedrich Kuhlau, who had come to Copenhagen in 1810. He himself picked out most of the melodies, and his arrangements formed the ideal for how a ‘real’ folk song or ballad should sound. The songs from Elverhøj, including Nu løvsalen skygger (Now bowers offer shadow), became wildly popular and took on the status of the “basic repertoire” of folk melodies.

In the subsequent wave of enthusiasm about folk songs and ballads, the ballad Dronning Dagmar (Queen Dagmar) became one of the most popular. It has a strong melody and a moving text about the wise words of the medieval queen on her death bed. The melody had been noted down in the Dorian mode, but typically for National Romanticism it was adjusted to ordinary minor, an anachronism with its own charm.

The newly-discovered style spread to instrumental music. Niels W. Gade was one of the first composers to capture it: in his First Symphony from 1842 he used the ‘folk tune’ På Sjølunds fagre sletter (On Sjølund’s plains so pleasing), which he had composed himself a couple of years earlier. The song is about the ghost of the medieval King Valdemar, protagonist of a favourite national-romantic story (this is the same Valdemar as we meet in Schoenberg’s giant work Gurrelieder).

Gade’s sparring partner and later father-in law was J.P.E. Hartmann. His a cap-pella music is mainly for male choir, partly because Hartmann as an academic was associated with the Copenhagen University Choir, and partly because it was not until 1851 that a concert choir with mixed voices, the Cecilia Society, was formed in Copenhagen.

For the latter choir, in 1888, he wrote his six choral songs op. 86, entitled “Religious and Popular Poems”, which aspire to the folk-song universe of love and nature. I våren knoppes en lind så grøn (In springtime there buds a lime so green) compares a young woman with a bud opening in the spring sun. Jeg ved, jeg vorder dig aldrig kær (I know I’ll never be dear to you) reverses the situation: the young woman is unattainable, and the poet’s soul is as dark as night. Even after half a century of fascination with the folk songs, the now 83-year-old Hartmann could still find new, personal variations.

Neighbour to Germany
Until the middle of the nineteenth century Copenhagen had no music academy, no philharmonic centre and no publicly organized concert scene. Scandinavians had to go to Germany to look for musical education, and for the same reasons German musicians were welcome guests in Denmark. The northern German Friedrich Kuhlau worked not only with folk songs but also with the first Danish songs for male choir. His Majsang (May song) from 1824/25 was given texts in German, Danish and Swedish. In Sweden it is now the official harbinger of spring (O hur härligt Majsol ler – Oh, the lovely month of May) and since 1831 it has been sung on Walpurgis Night (May Eve). Not many Swedes associate the song with anything Danish – or German.

From Germany too came C.E.F. Weyse, a versatile and virtuosic major figure in Danish cultural life at the time, whose fame today is based on his very smallest compo-sitions: hymns and songs for children. The evening song Natten er så stille (Calm the night, unstirring) from 1840 combines a minimal format with cosmic ideas. The children’s hymn Lysets engel går with glans (Gleaming bright, light’s angel see) comes from Weyse’s Morning Songs from 1837, but here Paul Hillier has set it in an expanded four-part arrangement.

Weyse had come from Altona to Copenhagen as a teenager and learned to work with the Danish language with great creativity and subtlety. It is touching that shortly before his death in 1842 he returned to his native German and put music to Goethe’s famous poem Wandrers Nachtlied (Wayfarer’s night song).

In Germany the endeavours of the Danish composers were considered interesting and different. In 1843 Niels W. Gade was given such an enthusiastic reception in Leip-zig by Mendelssohn that he became his assistant – among other things he conducted the first performance of Mendelssohn’s Violin Concerto – and on Mendelssohn’s death in 1847 he was his natural successor. Gade was in his own words “the darling of all Leipzig”, and of course that had to be enjoyed. From 1846 come the five songs op. 13, which have an elegance that must have satisfied the perfectionist Mendelssohn. Im Herbst (In autumn) thrives on its elegant shift between major and minor, while Die Wasserrose (The water-lily) is a sophisticated, weightless setting about the water-lily, a romantic symbol of the super-natural. Im Wald (In forest glade) combines the favourite time signature of the Danish Golden Age composer, 6/8, with hunting and forest symbolism from German Romanticism.

Reforms and traditions
The Romantic style in Danish vocal music faded at the beginning of the twentieth century, and Carl Nielsen and the composer of sacred music Thomas Laub led the way in the change in taste. Laub’s hymns and songs, when they are best, are strong and unostentatious – for example Stille, hjerte, sol går ned (Still, my heart, now sets the sun) from 1915 to a poem by the Danish rural poet Jeppe Aakjær. An image of the quiet moment when nature retires for the night. Despite Laub’s simplified expression the emotions are still the same as in Weyse’s romantic jewel Natten er så stille from 1840.

Another example of a ‘Romantic anti-Romantic’ is Yndigt dufter Danmark (Sweet is Denmark’s fragrance), a modern classic from 1970 by Svend S. Schultz. As a choral composer and choir director he was responsible for the modern Nordic vocal style – “bright, thin and dry”, as he put it. The succinct nature lyricism in Yndigt dufter Danmark touches on all the emotions evoked by the fragile Danish midsummer, in which love is almost conjured out of the blue.

Ib Nørholm (b. 1931), who has been one of Denmark’s most versatile and pro-duc-tive modernists since the 1950s, also likes to acknowledge the tradition, and side by side with complex orchestral works he has written simple strophic songs. He is also one of the few modern composers who has in recent years used the adjective ‘-Danish’ in his work titles. “I have always liked to defy the general opinion!”, Nørholm -himself says.

The cycle Mine danske kilder (My Danish Wells ) from 1994 is about the sources of inspiration that Nørholm finds in the Danish landscape (he spends as much time as possible on the beautiful island of Samsø in the middle of the Kattegat), but the title also points to Danish poetry as a source. The songs have texts by four favourite poets from his own generation and a verse by Christine Brahe from the Renaissance, which Nørholm came upon by chance.

Together they form a bouquet of observations about the world in which mankind has been placed. The difference between sky and earth is reflected in De lette skyer (The light clouds), which creates a contrast between the drifting clouds and the roots the man “who stands on earth”. The order is reversed in Wi saais nu (In God’s rich soil), which begins as a robust chorale, while mankind lies like winter seed in the frozen soil, and grows in budding polyphony when the spring light appears. Nature as inspiration is acclaimed in Fugleflokke (Flocks of birds), where the migratory birds make wedge-like and heart-like patterns against the sky, while the poet sarcastically asks “Is it wrong to vegetate?” in the naivist song Innocens den liggende (Innocent the supine). As a thoughtful conclusion we have Fadet fra Hangchou (The dish from Hangchow) in the middle of a Danish garden where the sky is reflected in the glaze of the thousand-year-old pottery.

Many Danish verses and songs from the last 200 years are typified by an “east, west, home is best” attitude, Carl Nielsen’s song Jeg bærer med smil min byrde (I bear with a smile my burden) from 1915 is an arch-Protestant hymn about the joy of hard work, where it takes very little to arouse a feeling of luxury (“My heart with joy can’t stop leaping at grassblades sprinkled with dew”), while the national poet of Romanticism Adam Oehlen-schlæger, in Underlige aftenlufte (Air of evening, strange thoughts forming) from 1915 is not tempted by exotic flowers and high mountains – on the contrary they make him feel homesick for his flat, cold native land.

Min Jesus, lad mit hjerte få (Oh Jesu mine, may my heart learn) from 1914 is a chorale melody that Carl Nielsen himself loved so much that he used it in his outstanding Wind Quintet from 1922. Oddly enough he had problems harmonizing his own melody and had to seek help from a younger colleague, the organist Paul Hellmuth. Only the melody is by Nielsen, the rest is by Hellmuth, and they were both satisfied with the partnership. Hellmuth’s comment on the result expresses yet another Danish tradition: “I have set it as simply as possible”.

Recorded at Garnisons Kirke on May 19 and 20, 2011 (Nielsen, Weyse and Nørholm)
and May 28, 30 and 31, 2012 (Kuhlau, Hartmann, Gade, Laub, Heise and Schultz)
Recorded by TimbreMusic, www.timbremusic.dk
Recording producer: Preben Iwan
Sound engineer: Preben Iwan