This is the 11th volume in Dacapo's acclaimed series of the complete symphonies by W.A. Mozart, recorded by the Danish National Chamber Orchestra and their renowned Austro-Hungarian chief conductor Adam Fischer. We have now reached some of Mozart's mature symphonies nos. 36 and 39, composed in the composer's last decade alive, the 1780s. 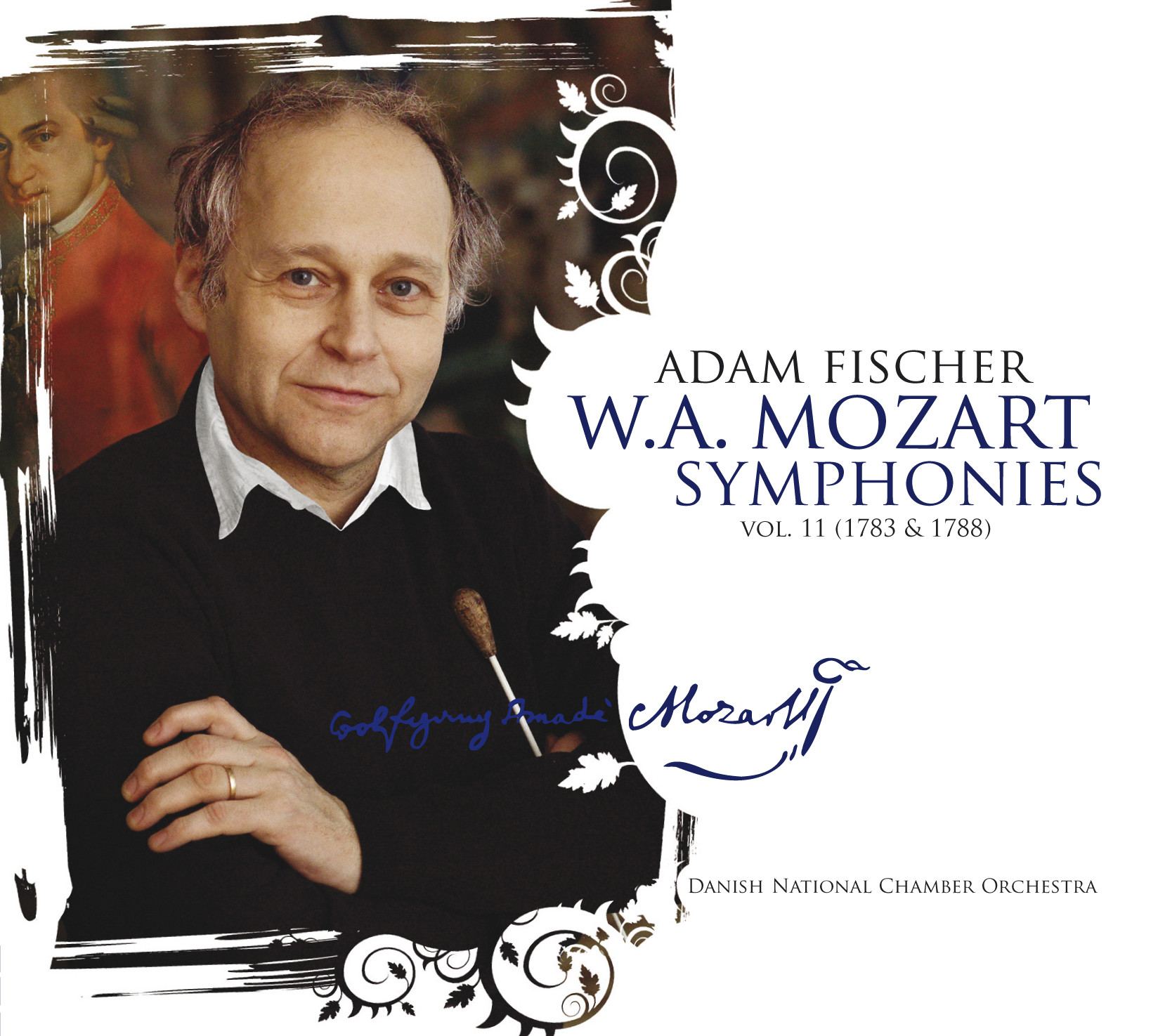 Mozart and the clarinet

“When the clarinet is well handled and accompanied, it is fresh, lively music,
pleasant to listen to, most of all on the water in the evening”

When the triumphal entry of the clarinet into classical music is described as a bolt of lightning descen­ding on the orchestras of Europe, this is an exaggeration. Between the first experiments and gaining its fixed place in the symphony orchestra almost 100 years passed.

Around 1700 Denner’s workshops in Nuremberg began experimenting with the single-reed chalu­meaux that had been used for special effects in operas and sacred music. They looked like recorders, but the tone was formed by a thin wooden reed, and they had the sound of the open-air life and folk music. Denner discovered that by changing the holes and keys one could obtain an instrument with undreamt-of possibilities. But the classical clarinet was not considered ‘house-trained’ until 1750. It was furnished with keys of brass and finger-holes that enabled it to play a scale of over four octaves – more or less.

At the theatre Komediehuset in Copenhagen, two clarinets made their debut at a court ball on 15 December 1766. Both there and in the rest of northern Europe the new instruments gained ground, but before 1780 they were only there as guests. When they were used, it was mostly in the high register as a kind of spare trumpets. But in Mannheim the musicians were also working with the lyrical possibilities: “You cannot imagine what a marvellous effect flutes, oboes and clarinets can have in a symphony,” says Mozart. Shortly afterwards he wrote his Paris Symphony (K 297), where he in fact played down the possibilities of the clarinets. Writing for clari­net is an art, and it took time to learn it, even for Mozart.

The advantages were obvious: the classical clarinet sounded beautiful, it was flex­ible and effective. It could play both louder and softer than an oboe, and just as vir­tu­osically as a flute, but keys with more than two sharps or flats sounded out of tune and ugly, and many of the fingerings that worked on an oboe were hopeless on the clarinet.

In faraway Norway the musicians had to manage with primitive clarinets and the results were as might be expected. In 1782 the city musician Lorentz Berg wrote:

“Although such instruments may be well made by the wood turners, yet one must help them greatly with the purity of tone by using the breathing and the attack; for if one were to leave the tone to fend for itself, this music would come to sound like the discord of two cats over a mouse.”

While Berg and his Norwegian wind players were playing cat and mouse, Mozart was premiering his Abduction from the Seraglio. Unlike their Norwegian colleagues the two clarinettists used at least three instruments (tuned in A, B flat and C). In addi­tion they often brought replaceable reeds that could change the pitch or compass. And then there were special instruments like the gentle basset horn – the alto instru­ment of the clarinet group. Mozart used it in music for the church and the Freema­sons, in the great wind serenade K 361 and in a number of operas, but never for symphonies.

In December 1782 he recycled a serenade he had written for the merchant Haffner in Salzburg. It was festive music with oboes, bassoons, horns, trumpets and strings. First he edited it a little, then he added flutes and clarinets in the first and last move­ments. They played the same as the other winds, but the flutes were much higher than the oboes, the clarinets lower. Each of the woodwinds lay tonally on its own shelf, and the modern symphony orchestra was on its way. The symphony that we call Haffner (K385) was greeted with exultation at a major concert on 23 March 1783.

The Bohemian wind players were among the first to learn the art of mastering the clarinet. ­Mozart met a small ensemble with clarinets, horns and bassoons (“poor devils, but they do play well together”). On a summer night in Vienna he presented them with a serenade which they played three times in succession. He had under­stood the nature of the clarinet. Soon he was writing heavenly works for the Empe­ror’s ‘Harmony Music’, and in the last ten piano concertos the winds are principal players in line with the pianist.

In 1780 the Russian ambassador engaged two clarinet virtuosi, and one became Mozart’s friend: “I have never heard the like of what you get out of your instrument. Your instrument has a tone so soft and round that no one who has a heart can resist it,” wrote a sensitive concert-goer. The clarinettist was called Anton Stadler, and he was not boring. He was from an old Jewish-East European dynasty that was always on its travels. Anton and his musical brother were taught by their father. At the ages of 15 and 16 they were thrown out of the home, and the they began to make their living as footmen and musicians with counts and ambassadors in Vienna. “We can play clarinet, basset horn, oboe, violin and viola,” they wrote immodestly in an appli­cation. In 1783 they were engaged to play in the Emperor’s star octet.

Stadler and Mozart probably met at a concert in the Freemasons’ Lodge. There was a sympathy between them from the first note; and from then on Mozart wrote a series of divine clarinet works for the foreign musicians.

When Mozart had financial problems, Stadler lent him money at an incredibly high rate of interest. The truth? It is that Mozart, inspired by Stadler and his playing, wrote a succession of works that have never been surpassed.

Stadler’s clarinet playing inspired Mozart to write a major symphony (K 543), for once without oboes, but with two clarinets that make their way playfully through four movements. They dance out from the other side of an old-fashioned minuet into an Austrian drinking song which to this very day can make the concert-goers smile.

The famous G minor symphony (K 550) is from the same period. It was possibly writ­ten for a tour in the late summer of 1788. It was performed at least once in Vienna and survived in a ­version with oboes and one with oboes and clarinets. In the latter edition he divided the original version’s oboe parts between two oboes and two clarinets – a masterly stroke, and it was to be his last symphony with clarinets, but not his last piece of business with devious clarinet players.

Three years later, when Stadler was to perform Mozart’s clarinet concerto, Mozart paid for his journey so he could play it in Prague. In return Stadler stole the original manuscript. After ­Mozart’s death, when the music publishers approached his widow for more clarinet works, she answered laconically: “You’ll have to go to Stadler, the clarinettist, who once possessed several original manuscripts as well as some trios that are still unknown. Stadler claims that when he was in Germany his trunk with the music was stolen.”

Stadler published a clarinet primer, he spread knowledge of the clarinet, and when Beethoven published his first symphony the clarinet was a fully accepted member of the symphony orchestra. That was in 1801. The same year the Paris Conservatoire opened its doors to 102 young clarinettists.

Nordea Fonden is primary sponsor for the recording of the collected Mozart symphonies with Adam Fischer and the Danish National Chamber Orchestra.