Duo Åstrand/Salo follow up their first instalment of sonatas by Friedrich Kuhlau with a selection of some of the composer’s most impressive works for violin and piano. Included is what some consider the first Danish violin sonata in the Romantic style, a work that glances towards the composer’s idol Beethoven but contains plenty of individual spice and allure. It is followed by sonatas in all but name, the Trois Duos brillants from late in Kuhlau’s career. They are brilliant, as the title suggests – three varied, evocative snapshots of the great cosmopolitan of Denmark’s Golden Age. 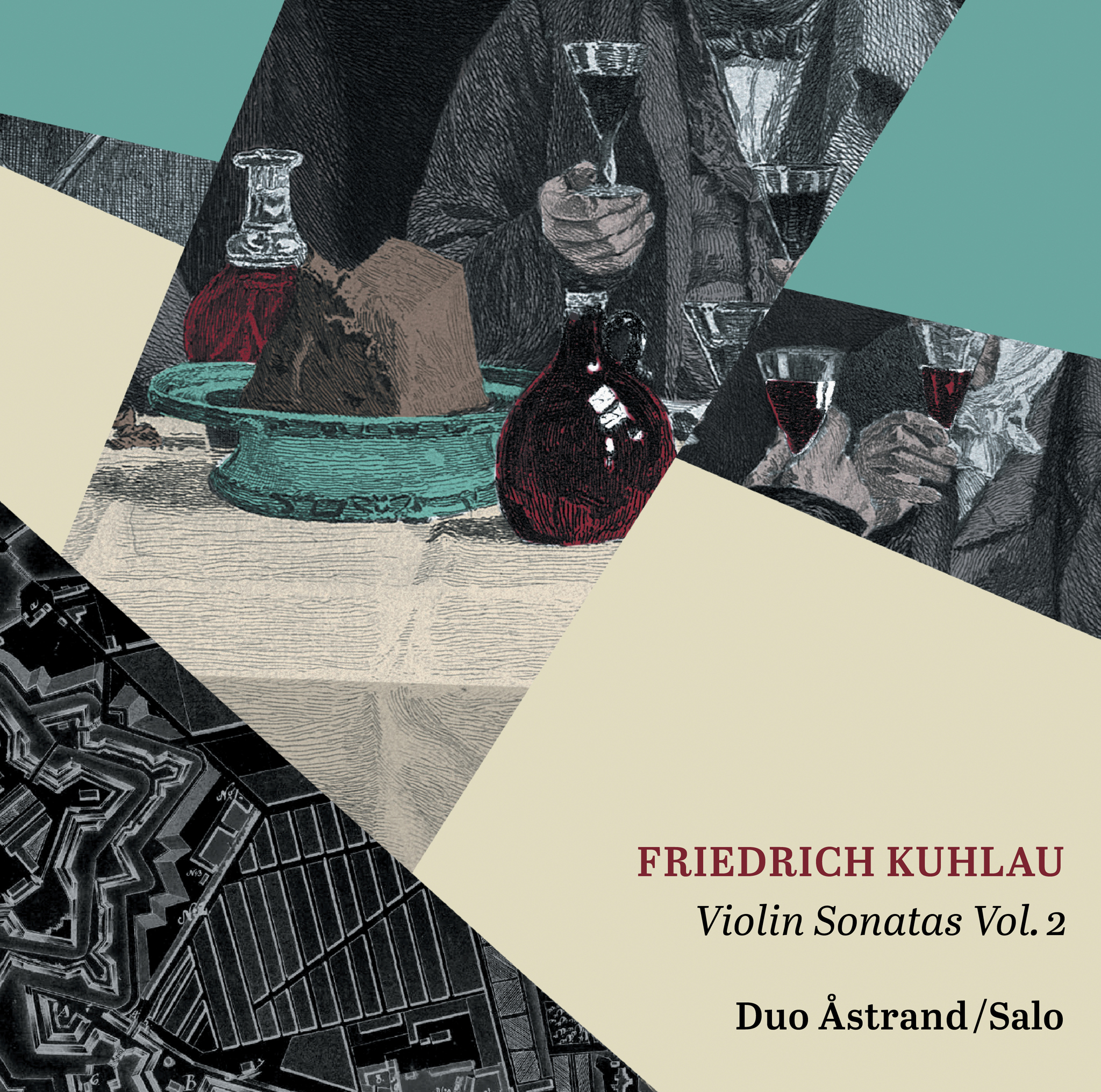 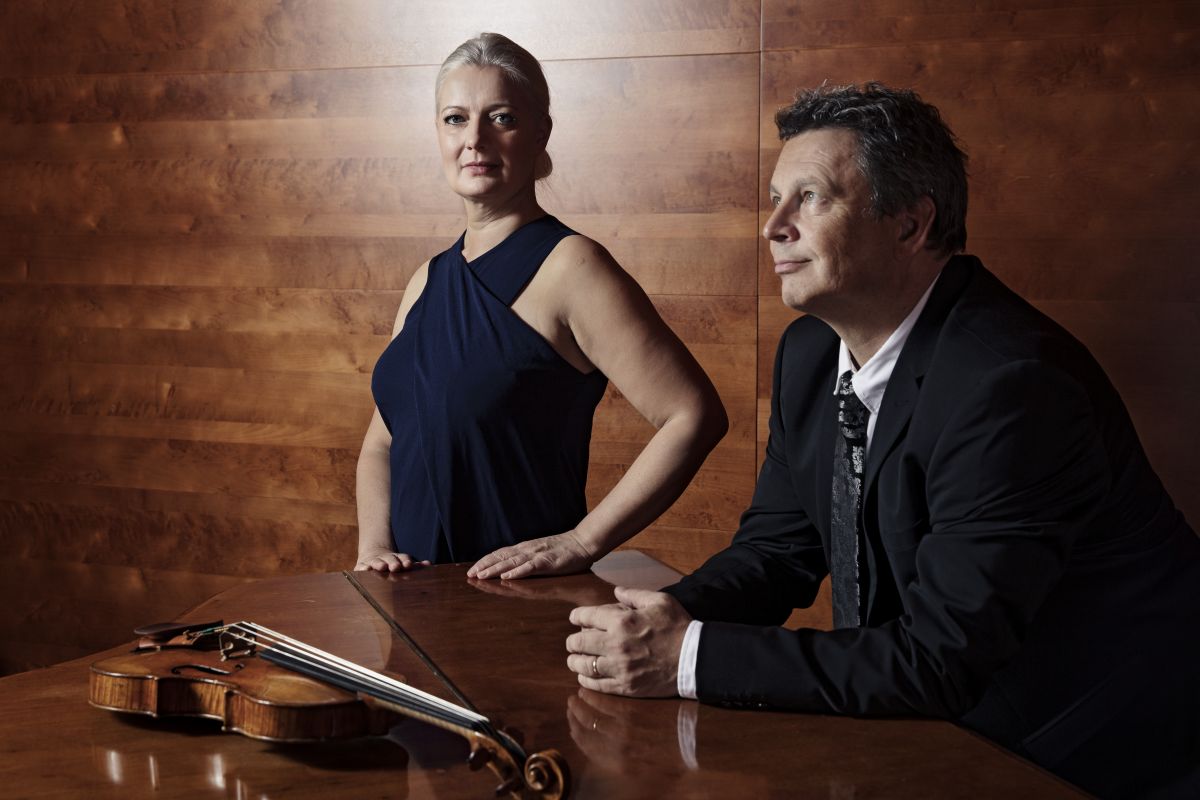 © Agnete Schlichtkrull
When you close your eyes and listen to Åstrand's and Salo's beautiful play, you may feel set aside for a matiné at Bakkehuset at Frederiksberg
Peter Dürrfeld, Kristeligt Dagblad
Ein erhabener, stilvoller Ausdruck
Uwe Krusch, Pizzicato
Music, which most of us did not already know, but which deserves a place on the record shelf in association with the long-known international composers
John Christiansen, JC Klassisk
Album of the Week
DR P2 Ugens Album
Un disc pletòric de musicalitat i bon gust
Carme Miró, Sonograma Magazine
The writing for both instruments is interesting and idiomatic
Joseph Magil, American Record Guide
Christina Åstrand and Per Salo play beautifully and delicately and are instrumental in making the rediscovery of the half-forgotten sonatas a good experience
Mikael Garnæs, Magasinet Klassisk
I can’t imagine anyone not liking these works
Jerry Dubin, Fanfare
SELECT PREFERRED FORMAT TO DOWNLOAD SINGLE TRACKS.
Total runtime:
79 min.

Friedrich Kuhlau was Danish music’s most cosmopolitan personality at the beginning of the nine­teenth century. He had a wide network abroad, and as a great admirer of Beethoven he fought for new tones in Danish musical life.

In 1806 Kuhlau went to Hamburg, where he studied with the strict cantor Schwencke. But that same year the city was occupied by Napoleon’s troops, and, in 1810, when the young men of the city began to be conscripted into the French army, Kuhlau left the danger zone and travelled to Copenhagen. The next year he made his debut as a pianist in a concert at the Royal Danish Theatre and was well received as an intriguing messenger from the continent.

For generations, Danish musical life had been dependent on immigrants and guests from the south. In 1813 Kuhlau too was granted Danish citizenship and the honorary title of Royal Court Musician with the duty of writing official cantatas and an opera every second year. These included epoch-making works in Danish music – the operas Røverborgen (The Robbers’ Castle) and Lulu and the music for the national play Elverhøj (The Elf-Hill) which has over the years been performed over 1000 times at the Royal Danish Theatre. The Elverhøj music is based on Danish and Swedish ballads and became the clearest indication of a new national-romantic ideal in Danish culture of the time.

Abroad, on the other hand, Kuhlau has passed into history as a flute composer. “The Beethoven of the flute” is the rather derogatory label that has stuck to him. Because he was never given a permanent position that matched his format, he had to exploit the fact that he could effortlessly write large quantities of high-quality music for the flute, one of the most popular instruments of the time. Kuhlau himself was not a flautist – a rumour that was already current in his own lifetime, but as he said, “I play this instrument very little, but I know it thoroughly”.

The flute music and the National-Romantic works have overshadowed Kuhlau’s other production, including his works for violin and piano, which encompass sonatas of several sizes. The Violin Sonata in F minor, op. 33 was Kuhlau’s first, written in 1821 and published the next year by the German publisher Simrock. It is dedicated to Louis Spohr, the famous composer and violinist, who was Kuhlau’s schoolmate at the grammar school Katharineum in Brunswick. Their paths diverged, and while Spohr in time became the best-known German composer after Beethoven – and the leading violinist – Kuhlau faded somewhat from the picture when he moved north to Denmark. They probably met again in 1821, when Kuhlau was on a long tour of Germany and Austria. In the Sonata op. 33 Kuhlau gave his all to please and impress his famous friend – and surely he also wanted to measure himself against him?

Kuhlau is good at baiting the hook for the listener, and the first movement starts with a surprising theme in the left hand of the piano. At the same time, it represents something typical for Kuhlau – that he builds further on an idea from another composer. The theme is identical to a little ‘storm motif’ that Beethoven uses in his lied Der Wachtelschlag, a lied Kuhlau also used in his variation work op. 75 for piano duo. This parody technique had functioned as a quite normal practice for hundreds of years but a later age which above all demanded quite personal ideas viewed it as a sign of artistic weakness in a composer. But one must certainly call ­Kuhlau’s idea of using the abrupt motif as an opening theme personal!

The storm motif smoulders on as a contrast to the lyrical major-key second subject, and on the whole, the movement has a striking agitation and dynamic. After the calm Larghetto of the second movement, the final movement is a large sonata-rondo whose turbulent character and broad format echo the first movement. The piano part suggests that Kuhlau had precise knowledge of Beethoven’s Appassionata Sonata (1805), also in F minor.

The sonata was given an excellent review in the leading musical journal of the time, the Allgemeine musicalische Zeitung, which did not dwell on the cue from Beethoven, but on the contrary considered the work original, well-rounded and carefully elaborated. In particular, the final movement was “full of fire and life, distinctive in its idea and execution, conceived in one piece, indeed in one breath, a truly masterly movement in every respect”, as it said.

In 1830 an alternative version of op. 33 appeared, arranged for flute and piano by the French flautist Paul-Hippolyte Camus. It is not certain that Kuhlau was made aware of the arrangement, but he knew of Camus’ existence and in fact planned to write a flute sonata for him. Because Kuhlau’s name became so closely associated with the flute, the flute version of op. 33 has been more frequently played than the violin version.

The same dilemma affected his last three sonatas. In December 1829 Kuhlau mentioned in a letter that his op. 110 was in press. He called the works “three large sonatas for piano accompanied by violin or flute”. He must have been very surprised the next year when his French publisher Farrenc published the sonatas as Trois Duos brillants pour Flûte et Piano. Gone thus were both the sonata designation and the violin as first priority.

Perhaps Farrenc thought – not wholly incorrectly – that the designation “piano sonatas accompanied by ...” was an obsolete formulation, and he certainly knew all about the fact that there were more sales in flute music than in violin music. In the printed edition parts for both ­violin and flute were given, but it was only in small print that it was mentioned that “the duos have even been written for violin and piano by the composer” – that is, that the violin version was not a secondary arrangement, but the real thing.

The three sonatas in op. 110 have ample first movements and characterful second and third movements. Like Kuhlau’s three small violin sonatas op. 79 from 1827 they work both individually and as a trilogy. Both sets have a minor-key sonata placed in the middle and they save what is surely the most impressive sonata for the end. But the sonatas op. 110 are longer and more ambitious. They are a noble conclusion to Kuhlau’s sonata production.

Duo No. 1 in B flat major begins in a calm, pastoral tone over a pedal point, and with assured timing, Kuhlau refrains from hinting at the tensions that follow later in the movement. The slow second movement is surprisingly fervent, a melancholy movement in a major key which Kuhlau has described with the strong words Adagio patetico con molta espressione. The quick final movement, quite in keeping with the tradition, is a merry rondo and develops into a charming dialogue between the two participants.

Duo No. 2 in E minor has a romantic ambivalence and bitter-sweetness. The first movement in 6/8 time is full of inspiring ideas in a very well-wrought balance between hope and ­despondency. The slow movement in B major, too, which begins as a beautiful Alpine idyll, ­reveals hidden worries. The final movement is a surprisingly grave sonata-rondo with a syncopated first subject. The movement ends not in E major, as Kuhlau elegantly suggests, but in E minor, where all the unease had its beginning.

Duo No. 3 in D major opens with a grand first movement. The initial figure in triplets and the subsequent chromatic theme pull dynamically, each in its own direction, and the vital piano part contributes even more dramatic tensions. The dreaming second movement has an unworldly beauty, while the third movement is a virtuoso rondo in 6/8 which plays with the ­galloping hunt rhythm. This was to be Kuhlau’s last sonata, but there is certainly no trace of either fatigue or any scarcity of ideas.

The 1820s had been a highly productive phase of Kuhlau’s life in which he had created some of his best works. He reached a personal peak in 1825 when he was on his second journey to Vienna and was able to meet his great idol, Beethoven. They spent a few days together and emptied innumerable bottles, while they exchanged canons and subtle exercises in counterpoint. Beethoven jokingly called Kuhlau der grosse Kanonier.

But Kuhlau’s unsettled life made him something of a stormy petrel. The fine honorary titles in Copenhagen were not followed by equally fine fees, and his income also had to extend to cover the maintenance of his aged parents as well as a foster-son and a sister who lived with him. Shortly after Kuhlau had sent op. 110 to his French publisher he was struck by disaster when a fire razed his thatched house in Lyngby. All his possessions were lost including an unknown number of manu­scripts and unprinted works. The broken-down composer moved to Copenhagen, where he died of tuberculosis the next year, 46 years old.