The German composer Friedrich Kuhlau (1786-1832) fled to Denmark as a young man and with his strong cosmopolitan personality became a loner – and at the same time a key figure – in the Danish Golden Age. Kuhlau championed new tones in Danish music, and his melodically appealing violin sonatas were the first Danish sonatas in the Romantic style. With this recording Duo Åstrand/Salo lends new lustre to music that has only rarely been performed in our time. 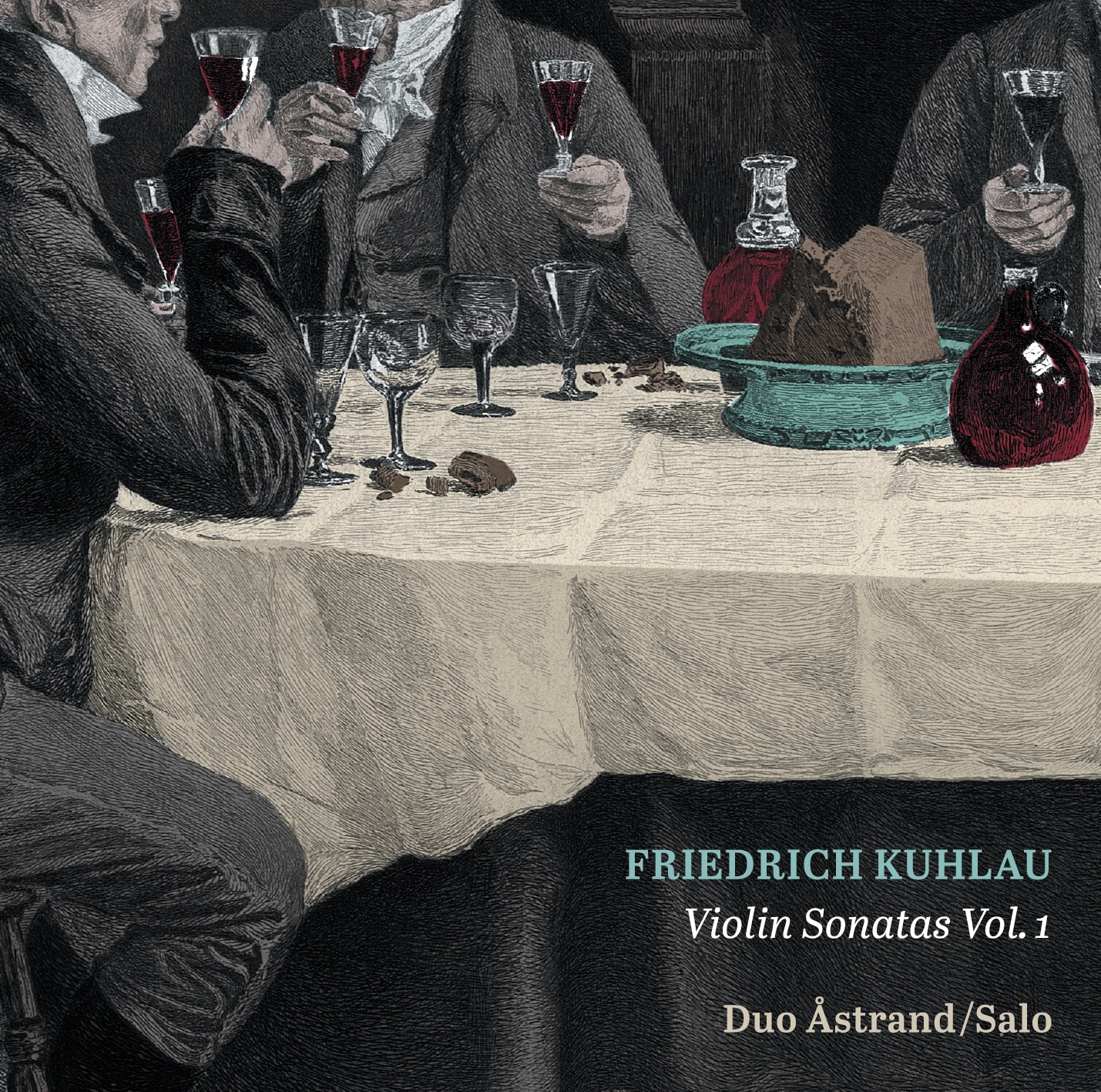 A COSMOPOLITAN IN DENMARK

In human terms, too, Kuhlau stood out from the crowd; and not only because he was a German who never learned to speak Danish, and only had one eye. He was a rest­less soul who did not fit naturally into the small, homogeneous Copenhagen elite to which his audiences and patrons belonged. Instead he preferred to live outside the capital.

If one reads through the ambiguous circumlocutions of the age the picture emer­ges of a warm, vital, but not very conformist man with a liking for jovial company, tobacco and wine – indeed something of an alcoholic. Like his model Beethoven Kuh­lau never married, or as cryptically remarked in a commemorative speech after his death: “He lacked many of the relationships and motives that are most congenial and encouraging to mankind. Music was his truest, almost his only female companion through the reefs of life”.

Kuhlau was born in 1786 in the northern German town of Uelzen. As a boy he lost his right eye in an accident, but this did not prevent him from aspiring to a future as a musician. As early as his teenage years he was active as a pianist and had his first com­­positions published.

The flute music and the iconic national-romantic works have both overshadowed Kuhlau’s other production. He was a highly prolific composer who besides his theatrical works also wrote piano music, three piano quartets and a masterly string quartet which according to plan was to be one of six. And then there is the violin music: a sonata op. 33, the first Danish one in the Romantic style, and the three short sonatas that make up the collection op. 79.

To these we can add the Sonata op. 64, published in 1825 and dedicated to Frederik Clauson-Kaas, Lord Chamberlain to the Crown Prince.

The sonata is an ambitious work, whose first movement strikes up a concertantestyle right from the introductory chords of the piano. Allegro con energia is a fine description of the inspiring interaction of the two parts in this broad, energetic move­ment. It balances excellently between proud dotted rhythms and lyrical sweetness.

The second movement with the designation “Ancien air danois” consists of variations on the shipwreck ballad known as “De engellandske Frøkener” (The English Maidens). The piano intro­duction paints the dark, rolling sea – something Kuhlau had done before in his first con­cert in Denmark, where he played a large piano work entitled The Storm at Sea. After this, the theme is presented by the violin, and then come eight very different variations packed with ideas and changing stylistic features. The ballad returns in the coda, when the last rolling waves of the storm break against the cold shore.

The melody had been collected a few years earlier in Jutland, and Kuhlau got to know it even before it was published. Later he also used it in Elverhøj (to the text “Der vanker en ridder” – A knight comes riding) – and in a rondo for piano, but in op. 64 it was the first time he used a Danish folk tune in a work of chamber music. Kuhlau belonged to the front line of National-Romantics, who hunted out the soul of the nation in folk poetry – an interesting contrast to his otherwise highly international horizon.

The long third movement shows in a different way how Kuhlau absorbed ideas and incorporated them in his own music. The main subject of the movement is largely identical to the subject of the final movement of Beethoven’s Quintet op. 16 – even the key of E-flat major is the same. Kuhlau uses his ‘mutation’ of this hunting theme for a highly energetic sonata rondo. Again the music has a combination of charming themes and surprising modulations that point in the direction of Schubert, although Kuhlau probably did not know a single one of Schubert’s works.

Kuhlau originally wrote the sonata for flute and piano. In 1855 it was published in London as a violin sonata in the version recorded here. That an outside hand has been involved has not had the slightest importance for the musical quality of the sonata. At all events it is a masterpiece.

The re-instrumentation is the work of the German-Jewish violinist and composer Eduard Eliason (1808-1886). He was a pupil of the French violin master Pierre Baillot and as a young man went to England. In 1832 he gave the first British performance of Beethoven’s Violin Concerto, conducted by Ignaz Moscheles. Eliason was employed as the conductor at the Drury Lane Theatre, but in 1842 returned to Germany to become the musical director of the Frankfurt Stadttheater. Eduard Eliason was in other words a man who knew all about the violin, and for the same publishing house that issued the Sonata op. 64 he planned a whole series of violin versions of Kuhlau’s works for flute and piano. Unfortunately he did not manage to realize any more before the publisher closed down.

The three sonatas form a highly satisfactory totality. The first sonata, in F major, begins the cycle in pastoral style. It sets the standard with a compact, but perfectly worked-out first movement; harmonious and amiable music that lives up to the desig­nation Allegro gustoso, “tastefully, agreeably fast”. The second movement is very short, almost a romance, while the final movement is a playful rondo.

The second sonata is in A minor and offers a more contrast-filled first movement and a splendid finale in the form of a catchy polonaise, more elaborated than the rondo in the F major sonata. The third sonata, in C major, is the confident conclusion of the series, where the format has been developed further. There is no doubt that this is a sonata, not a sonatina. The first movement involves many modulations – among other things the second subject comes in the unexpected key of E major. The second move­ment has an opera-like grace, while the last movement is a truly festive finale with the humour of a drinking song and an outgoing piano texture that is to be played “brillante”.

In direct contrast to the sonata op. 64 the three sonatas op. 79 appeared later in arrangements for flute, made by the flute virtuoso Louis Drouet (1792-1873), whom Kuhlau had met in Copenhagen in 1822.

In the three sonatas op. 79 one senses how Kuhlau is a born “serial composer” who inspires himself through the work with his own music. In general the 1820s were a highly productive phase of Kuhlau’s life when he created some of his best works, including the fairytale opera Lulu and the overture to the play William Shakespeare. He achieved a personal high-water mark in 1825 when he went on his second journey to Vienna, forged many contacts abroad and not least met his great idol, Beethoven. They spent a couple of days together and emptied innumerable bottles while they exchanged canons and artful exercises in counterpoint. Beethoven jokingly called Kuhlau “der grosse Kanonier”.

But Kuhlau’s restless life was also something of a jinx for him. The fine honorary titles were not followed up by much money, and his income also had to extend to sup­porting his old parents, an adopted son and a sister who lived with him. In 1830 both parents died, and the next winter Kuhlau’s thatched house in Lyngby burned down with all its furnishings, including a wardrobe full of manuscripts. No one knows how many works were lost in the accident. The broken-down composer moved to Copenhagen, but died the next year, 46 years old, of tuberculosis.