“A tribute to inwardness, patience and beauty.” This is how the Danish composer Poul Ruders (b. 1949) described his Viola Concerto from 1994. The music has an almost Late Romantic expressive style and is played with rich, many-faceted feeling by the Norwegian viola virtuoso Lars Anders Tomter. In his Handel Variations (2009) Poul Ruders has composed no fewer than 90 variations on eight bars from Handel’s Water Music. The short variations grow together into a symphonic totality where the orchestral colours are constantly shifting and where Handel’s starting point develops into pure Ruders. 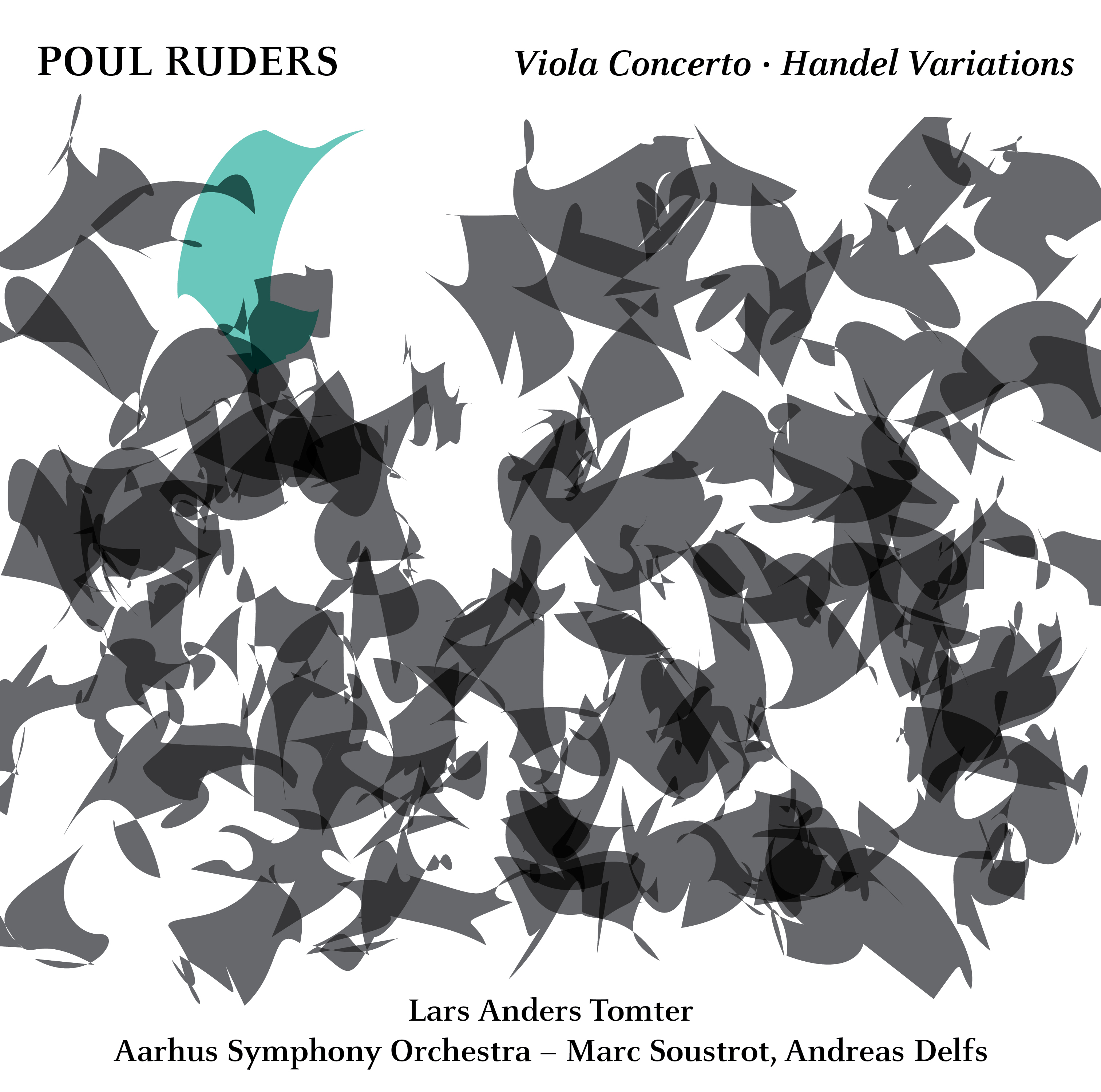 “The music is deep in a way that leads the mind to Sibelius (which is of course a big compliment) and the solo part is performed impressingly by the Norwegian violist Lars Anders Tomter whose playing is world class”
Peter Dürrfeld, Kristeligt Dagblad
Ruders is a specialist in writing variations, and they are entertaining, also functionally enriching, but also disruptive in the way the theme is destroyed and restored, but it is exciting
John Christiansen, JC Klassisk
Dacapo’s sound is vivid with terrific depth. A winner
Guy Rickards, Gramophone
Lars Anders Tomter plays with will and an impressive tone
Andrew Mellor, Magasinet Klassisk
Nominated for the P2 Music Award 2019
P2 Prisen 2019, DR P2
Lars Anders Tomter is an immensely authoritative soloist who phrases Ruders’s soaring lines with consistent aplomb and a stream of solid, golden sound
Carlos María Solare, The Strad
Un clímax polifònic amb una excellència instrumental.
Marçal Borotau, Sonograma
The viola's pleading lyricism is a lonely voice in a shadowy landscape. Only at the very end is there a fleeting, visionary glimpse of serenity, immediately before the curtain comes down
Records International
Zwei starke Werke, mustergültig dargeboten
Burkhard Schäfer, M&T
SELECT PREFERRED FORMAT TO DOWNLOAD SINGLE TRACKS.
Total runtime:
64 min.

‘I have a mantra’, says the Danish composer Poul Ruders: ‘To entertain, to enrich and to disturb’. It’s always important to listen out for the note of irony in what Ruders says. Mischievousness, darkly-inflected playfulness, the Mephistophelean twinkle in the eye – they are as much characteristics of the man as they are of his remarkable music. Mantras, mission statements, personal affirmations, are all features of modern discourse Ruders views quizzically at best. All the same, this is a composer who does take a lively interest in how his music affects people: ‘More composers do than are prepared to admit it’, he adds knowingly. And there could be no finer example of how his music can entertain, enrich and, ultimately, disturb, than the Handel Variations, composed in 2009 for the 75th anniversary of the Aarhus Symphony Orchestra the following year. The theme Ruders chose for his variations is the engagingly brief ‘Bourrée’ from Handel’s Water Music – or, to be more precise, it’s the first eight bars of the Bourrée that Ruders presents at the beginning of Handel Variations and then, as he puts it, ‘hauls through the wringer’.

One of the reasons Ruders decided to focus on this tiny, simple idea was that it had been hovering at the back of his mind for some years, quietly but insistently demanding some kind of creative engagement. But it was the realisation that this persistent ‘ear-worm’ could be the perfect ­basis for a set of variations that really set Ruders’s mind working. Strong, distinctive melodies aren’t always good variation material: they tend to hold their identity stubbornly and refuse to submit to transformation. But Handel’s Bourrée is both very simple (it’s really no more than a rapid sequence of tiny cadential figures) and highly, almost maddeningly memorable, like the ‘Ho-ho-ho’ witches’ chorus theme from Purcell’s Dido and Aeneas Ruders plays with so memorably in his variation-form orchestral work Concerto in Pieces. The consequence is that Ruders is able to put Handel’s tiny theme through no less than 90 variations, transforming it into ever richer and stranger forms, without the listener feeling that Handel’s basic pattern has ever been entirely lost. Why 90 variations? Originally, Ruders wanted to compose 74, one for each year of Handel’s life, but the impetus just kept carrying him forward until, as he puts it, ‘the tube was squeezed absolutely flat.’

While it is clearly Handel’s theme that carries the music through to its conclusion, there is at the same time a kind of process of ‘erosion’ – of deconstruction and reconstruction – at work in Handel Variations. ‘Imagine a vast gallery of Handel portraits,’ says Ruders, ‘in which Georg Friedrich appears, at first fully recognizable, but then the “disfiguration” sets in, and approximately halfway into the piece, all recognizability is gone – and now Handel-variations become Ruders-variations, because I carry on transforming the middle variations, which are now more Ruders than Handel...’ And behind, or perhaps it’s better to say within, this seemingly abstract process, an emotional drama is also being played out, part-concealed at first behind characteristic Mephistophelean masks, but increasingly forefront in the later stages of the work. On one level Handel Variations is strictly organised, with each variation having a ‘twin’ at some point in the structure. On another we sense a gradual ascent from the wickedly witty opening variations towards a visionary pinnacle, complete with chiming bells, yielding eventually to a descent into melancholy. The emotional arc of Handel Variations reminds this writer of the Australian poet Les Murray’s brilliant evocation of the glory and pathos of creativity, Performance. ‘I starred that night, I shone’, Murray begins, ‘I was footwork and firework in one’. Dazzling image succeeds ­dazzling image, but at last, inevitably, comes the painful return to earth: ‘As usual after any triumph, I was, of course, inconsolable.’

This is the world – the aching, desolate sadness that underlies Mephistopheles’s wicked teasing and mockery – which the Viola Concerto (1993-4) makes its home. Yet paradoxically there is also a strange kind of peace present, or at least suggested, in this music. It is, Ruders wrote at the time, ‘a musical tribute to serenity and patience, rare qualities in a day and age, where the mind is never allowed to rest, being constantly bombarded by short-lived, flashy “zaps”; it is a piece devoted to the right and ability of music to stay aloof, maintaining its emotional integrity, detached from the tyranny of fashion and trend.’ In these words one can also sense something of Ruders’s admiration for Sibelius, the great Nordic musical exemplar of ‘integrity’ and detachment from the ‘tyranny of fashion and trend’, whose development of highly original structures from tiny seed-like motifs has struck many listeners as profoundly organic in its thinking.

We can hear something similar, but at the same time highly personal, at work in the Viola Concerto and its two companion works, the Cello Concerto Anima and the Piano Concerto No. 1. Each makes use of a technique Ruders developed to which he gave the title ‘minimorphosis’. Everything derives, he tells us, from the viola’s melodic line that opens the work, from which are evolved ‘independent, simultaneous layers employing the ancient virtues of augmentation and diminution (broadening or shortening of the rhythmic patterns)’. The listener can hear – or at the very least feel – this process at work right at the start. The viola’s long singing phrase is inter­mittently, quietly doubled, now by half the orchestral violas, now by the flutes. But the rhythms of the orchestra instruments are not quite the same as those of the viola, so that these accompanying lines seem slightly ‘out of phase’ with the soloist. More instruments join in – clarinets, a horn, violins, and so on – and as their rhythms become less and less like those of the solo viola, so these lines begin to take on a life of their own. Gradually the voices ­proliferate until, at the high point of this first section, the viola ceases, and the orchestra revels in the rich polyphonic texture Ruders has evolved. But then the viola returns, the mood relaxes, and the character of the music begins to change – strings increasingly still, woodwind livelier, more soloistic, but still deriving from the original viola line.

After the first performance at the BBC Proms Ruders decided that, for all its sustained logic, the Viola Concerto was simply too long. The Largo sonore section at the heart of the work, for viola and hushed high string harmonics, was reduced in length, and the second solo cadenza was also cut, but listening to this recording it would be hard to guess where the surgeon’s scalpel had been utilised. The Concerto’s large-scale lyrical progress still feels inevitable – in fact the ending seems even more logical in this revised version. Listeners may sense in the piquantly dissonant harmonies a yearning for some kind of resolution, and as the work progresses this yearning seems to grow stronger. The final section builds to another big polyphonic climax, but now it subsides onto something very like an E major/minor chord. Then the coda, marked Intimo, quasi penoso (`Intimate, almost pained’) at last achieves a kind of stability on a long-sustained string chord which is even more clearly G minor. But at the very end, even the stability of the strings’ chord is called into question: the bass shifts from a solid G to a B flat, as the viola swoops upwards to the same note, fortissimo, six octaves higher. Has the Viola Concerto achieved serenity, or has it only glimpsed its possibility? Either way, it points to something far removed from, and much needed amid the nervous, compulsive frenzy of our times.