The music of the Danish composer Hanne Ørvad is a source of extraordinary listening experiences. In quite undogmatic ways her choral music gives space, sound, colour and life to the words of highly varied poetic texts. This CD presents five of Ørvad's most important choral works, from her very first composition Winter Organ (1991) to one of the most recent, Threna from 2003. 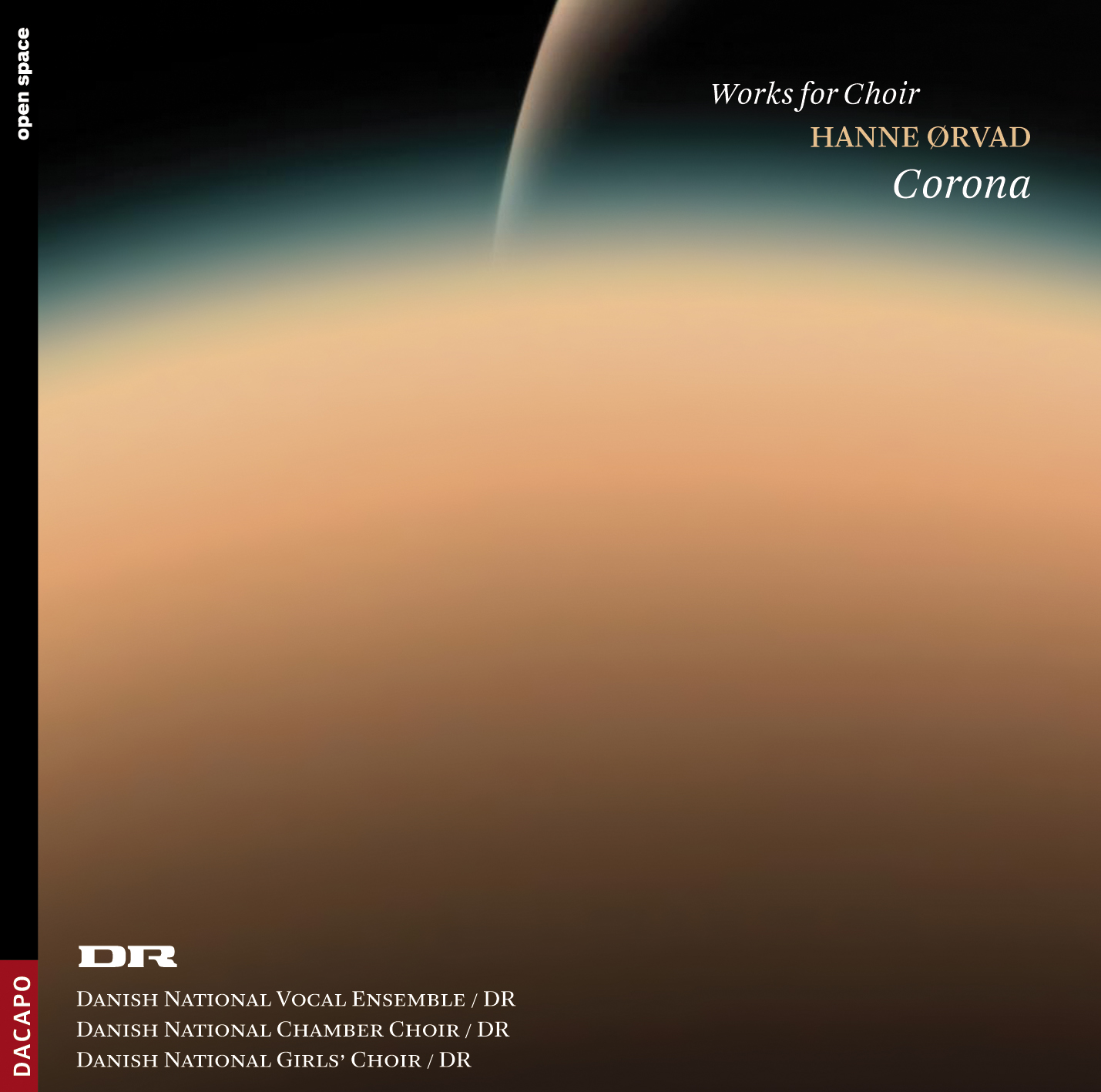 I am a singer and a writer of music, and my natural mode of expression is music and sound. I think in sounds and tones, and I produce them, partly in the form of sung sounds and partly as heard, written-down sounds. And it's a long way from that to the spoken word.

The words are Hanne Ørvad's (b. 1945) at the beginning of a lecture she gave about her music in the autumn of 2000. At that time Ørvad had been working as a composer for just under ten years, and as a professional singer in the Danish National Chamber Choir/DR for almost 25 years. In one way or another there has always been music, and above all song, in Ørvad's life, and at the time of writing there are over 50 titles in her worklist. The human voice is used in the majority of them, and a quarter are choral works.

The five works selected on this release to portray Hanne Ørvad's music were composed between 1991 and 2003 - from the very first to one of the most recent - but despite the long timespan one is in no doubt as a listener that the music was written by the same person: it is unmistakably Ørvad's.

Although in the above quote she swears more to music than to words, words in fact often function as a driving force in her music. The words, both their content and expression, give her the inspiration for the music. Texts often supply the meanings that Hanne Ørvad uses to articulate the musical context, and this means both the thoughts and utterances that are inherent in the words, and the particular expression of the actual spoken sounds. The clash of consonants, the colours of vowels, the rhythms of words to a great extent provide the material for the works. In this way Ørvad's music becomes entirely her own, because one feels one can directly sense the many listenings, interpretations and decisions that were necessary to get the music to sound.

Music of the northern sky

Vega was written for the Netherlands Chamber Choir in 1996, and the title refers to the star of the same name. It is seven small continuous pieces in seven strophes, written by Hanne Ørvad herself in Danish and later translated into Latin.

On the one hand what we have is a collection, simple and sensual, of overpowering, expressive musical phrases that describe the star and its immediate surroundings in notes and words. On the other hand it is music that deals with completely ungraspable circumstances and phenomena in a faraway galaxy.

The seven strophes function as a kind of character-pieces, each with its own angle on the qualities of the star Vega and its surroundings from the perspective of an earth-dweller. The music presents images of huge, intense entities - the magnitudes of suns, distances in light-years, dust-clouds and dark areas in outer space - within the framework of Ørvad's meaning-packed musical language; dramatic, effective expression and surprising, sensual sounds that glide from one to the next in one great motion. The seven strophes are circumscribed by two mighty, almost identical phrases, but in between, the music runs its course through a wealth of moods.

With its Latin texts the music evokes memories of the scientific observations of the universe during the Renaissance, and thus associations with a forgotten world where astronomical and musical phenomena not only resembled one another but - for the scholars - quite factually had exactly the same harmonic features.

As a quite different angle on the titles, the work is dedicated to the luthier Knud Vestergaard, who created the Bach bow called ‘Vega'.

The choral work Kornell is only the second Hanne Ørvad wrote - in 1992. The three movements of the work are based on the Swedish poet Bo Bergman's three poems Melody\,\\Adagio\\ and \\Serenade\\, whose very titles invite a composer to give them musical life. But it is just as much the poems' sensitive rhythmic mixture of the expression of love and the description of nature that prompts the translation of the words into notes and musical form. And that is precisely what Hanne Ørvad has done. She herself has explained that in connection with Kornell she experiences that the words, as if she had a special synaesthetic sense for the purpose, spontaneously ‘blossomed into melody'.

The direct connection between music and words is easy to follow for the listener and gives the experience a special closeness - one senses the experience of nature that perhaps originally inspired Bo Bergman. Sometimes one thinks one hears the sounds of nature itself in a steadily moving flow of rivers and winds, even though this is extremely artful choral music. In the ten minutes or so the work lasts, water and wind surge, clouds glide and the heart beats.

This might sound as if these are tone-paintings of weather and wind, but it is more sophisticated than that. While one feels that the individual melodic motions and rhythms are in some kind of accordance with the words being sung, they also have an overarching form. The individual parts appear again and again and create identity, variation and cohesion.

With Threna from 2003 for women's choir, cello and percussion, Hanne Ørvad joins a long succession of composers, including Pergolesi, Rossini, Scarlatti, Verdi and Poulenc, who have set the Stabat Mater text from the thirteenth century. The text, which begins ‘The grieving mother stood', describes the torment of the Virgin Mary at the Cross of Christ.

Hanne Ørvad's title comes from the Greek threnos, which means ‘lament' - that is, grief as expressed in public, and it is as if the tragedy that is omnipresent when whole assemblies of people express their grief can be heard throughout the work. In other words it is a highly dramatic piece of music that Hanne Ørvad has written, and this is also underlined quite clearly by the instrumentation she has chosen. The girls' choir is accompanied by cello, tubular bells, snare drum and a low gong.

The introduction to Threna can perhaps be understood as the question that the rest of the work answers, and gives an impression of the musical material. Threna begins instrumentally with a slow pulse, slower than in a human being at rest. The cello divides up the bars with a series of separate high leaps and is accompanied by pulsating tubular bells and low gong beats. The choir enters with the same melody as the cello, a little faster, homophonically - dramatic and at the same time clear - with the heart-rending text that is almost too precise: \\Standing sorrowful, the mother cried/beneath the cross so bitter/where He hung, her dying son.\\

The track on this CD is a live recording of the first performance of Threna in the church Holmens Kirke on 6th April 2003.

Paschal Hymn is from 2001 and is the second Easter work on the CD. The original text is three English hymns that Hanne Ørvad has abridged and changed. She has written four Latin verses which one by one introduce, bridge and conclude the hymns like a ritornello.

The work as a whole is about one of the most significant events in Christianity - the moment when Jesus is crucified and according to the Christian message gives His life to redeem mankind. The movement begins: Ecce arbor decora/Ecce lignum crucis/Nulla silva talem profert fronde, flore, germine (Behold the exquisite tree/Behold the tree of the Cross/No forest bears such foliage, blossom and fruit).

The four voices enter simultaneously, slowly, homophonically, ascending, and at first in unison - each syllable with its own note, until the second syllable of decora, where a close-knit texture is sung in four different emphasized durations - 3, 4, 5, 8 - such that this particular syllable becomes expressive, unstable and rhythmically effective, until the phrase ends in a long, stable sound. The second phrase is almost a repeat a fifth higher, and this time it is the first syllable of crucis that is emphasized. In the last phrase the four voices descend again, and the last three words are expounded, each in its own bar, with highly condensed pitches, sounds and rhythm and shimmering ornamentation.

So much for the first eleven of 170 bars. On the face of it, it is simple, with two ascending and one descending homophonic phrases; but extremely detailed, expressive and with the quite distinctive Ørvadesque relationship between music and text.

The choir as instrument

Winter Organ is the longest work on the CD and remarkably enough also Hanne Ørvad's very first a cappella choral work, composed in 1991. Of equal interest is the fact that it is also her most complex musical piece. As if it were not enough that the Swedish poet Erik Axel Karlfeldt's large poem is in some places spread over a whole twelve choral parts, Ørvad has everywhere given the words musical life in a great, striking, undogmatic tour de force.

Just as with words and their synonyms, Ørvad constantly varies the musical expression of the words, such that Karlfeldt's expressive and intensely effective sequences of words are challenged to the full musically by Ørvad's impressive palette of tones.

However, the sophisticated, original sounds have little to do with modernist experiments. There is an affinity with the other choral composers of the twentieth century - for example Francis Poulenc - but only insofar as this is music that exhibits continuity with several centuries of tradition. In Winter Organ, as in Ørvad's music in general, the music exists in a pleasing, varied tonal space with a melodic and rhythmic basis at a pitch where the sound is good for the individual singer in terms of showing what the voice can do - not what it cannot do.

The text is divided into strophes, while the music has been composed as one long continuous progression. Hanne Ørvad has experimented with textless interludes, with the stresses of the words, with special sonorities, with great dynamic fluctuations and much else - and it is clear that she has had wished to use the choir as a unified instrument, but also to test the limits of its expression.

This CD has been recorded in cooperation with the Danish Broadcasting Corporation.
Array ( )
randomness