The Danish composer Per Nørgård (b. 1932) finds inspiration for his outstanding percussion music in the forces of nature, eastern mysticism and exotic rhythms. In the four works on this CD we encounter a melodic side to percussion, when for instance the soloist uses a violin bow to play the vibraphone and the musical saw. Two of the works were written especially for the Colombian-born percussionist Christian Martínez, who plays here with the Esbjerg Ensemble conducted by Petter Sundkvist. 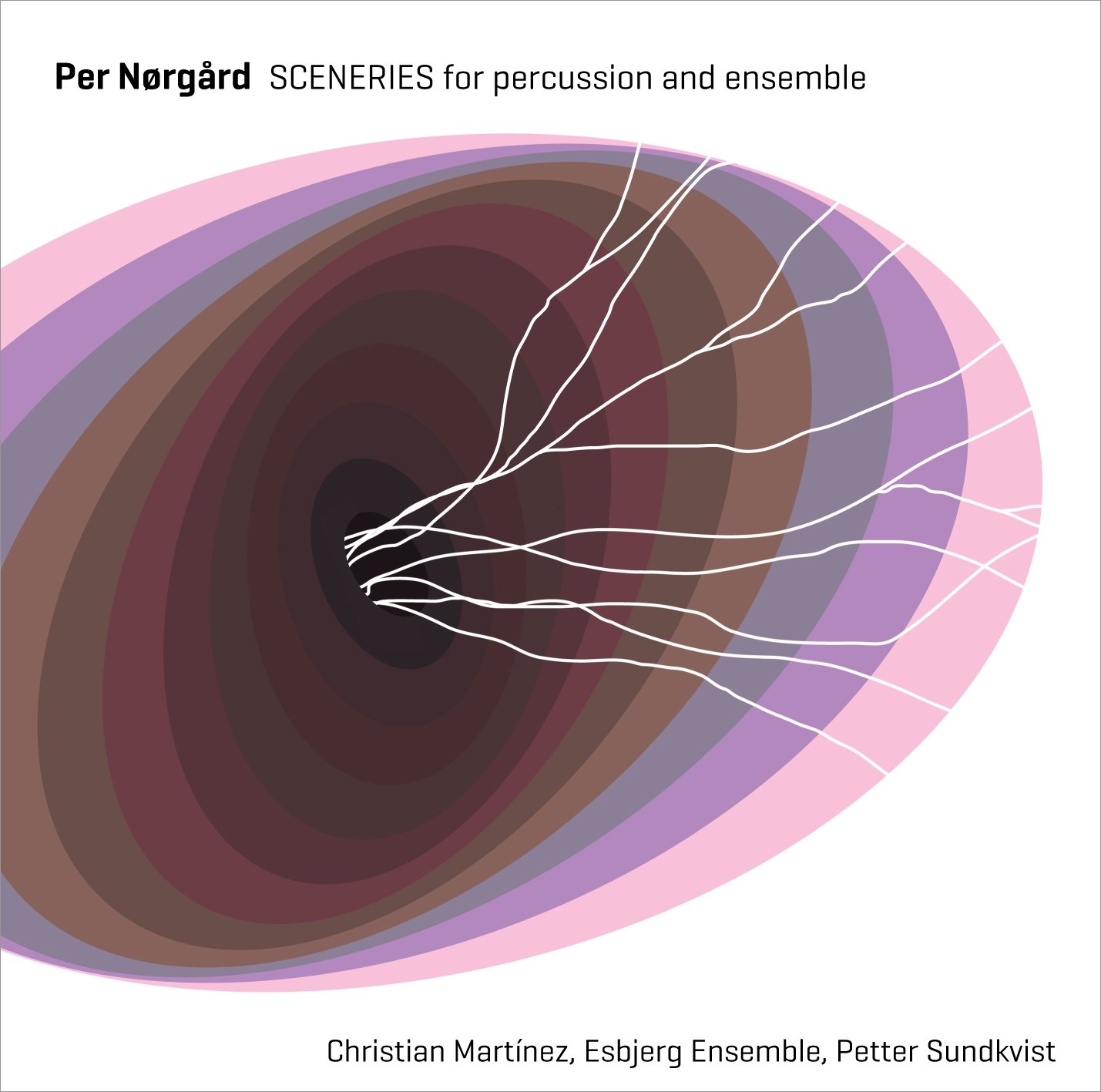 PER NØRGÅRD by Eva Hvidt

The composer Per Nørgård said in an interview in the 1970s: ‘I stand with one foot in western rationalism and the other in eastern mysticism, but I am searching for something quite different’. The statement says a great deal about his music and the development he was undergoing at that time. At first his starting point was Copenhagen, where Per Nørgård (born in 1932) was a pupil of Vagn Holmboe during his academy years; but at the same time he was greatly fascinated by the music of the Finn Jean Sibelius. Later, like other composers of his generation, he explored central European serialist music. It was against this background that Per Nørgård developed his own so-called infinity series on the basis of the mathematician Benoit Mandelbrot’s fractal theories. Per Nørgård’s Third Symphony (1976) became a monumental high point in his use of the composition method derived from these theories and his ideas on the cosmic interrelations of every-thing. Another important inspiration came at the end of the 1970s when Per Nørgård went to Bali three times. There he experienced the distinctiveness of Balinese music with its rhythmic hierarchies and many examples of music with the proportions of the Golden Section. As a result, elements emerged that had previously remained implicit in his music. Per Nørgård worked with tone rows, wave motions and interference. With the work I Ching from 1982 he also began to compose solo music for percussion, hitherto a rare genre in the western music tradition. Per Nørgård’s I Ching, the title of which goes back to the ancient Chinese book about the changes in life, is a highly demanding percussion work with a huge array of exotic instruments, requiring great physical ability from the percussionist in terms of flexibility, tempo and ‘yin and yang’ rhythms in scores of combinations. These binary rhythms (that is, yin-yang/bright-dark) also formed the rhythmic basis for other percussion works by Nørgård, performed for example in collaborations between professionals and amateurs. The rhythms of the Golden Section appealed greatly to Per Nørgård’s feeling for odd stresses, and since then he has returned many times to the way a variety of sequences can exist at the same time, even in the phrasing of a unison melody. This can be heard clearly in the percussion concerto Bach to the Future (1992), composed over three preludes from J.S. Bach’s Das wohltemperierte Klavier. On the present CD, it is not least the melodic percussion that predominates; not only as a result of the collaboration with the Esbjerg Ensemble or the fact that the percussionist, Christian Martínez, strokes the vibraphone with a violin bow. He also engages in new, more domestically exotic experiments by playing on the musical saw.

Prelude to Breaking (1986) was composed under the impression of the great breakers in the sea off southern India, where the composer sensed the fundamental tone of the sea as a low-sounding G. The title is to be understood as a prelude to the breaking of the waves. In connection with this CD recording of the work Per Nørgård has written: “Prelude to Breaking is close to nature in the broadest sense, since the work was inspired by the slow build-up of eddies before the great wave (‘breaker’) strikes in white foam. However, the music is not directly descriptive; it is grounded by an ostinato bass, over which a long melody extends, while a tabla-like, ‘skewed’ rhythm creates ever-increasing tension and a growing density. The breaking of the wave is close to naturalist tone-painting, but the work as a whole is like a classical arching form: ascent and subsidence.” Intensifying the mood of the vanishing play of tones, the score offers a melodic line for mezzo soprano to some lines by Gunnar Ekelöf, the Swedish poet: ‘Drowning in the mist, the dizzy birds of dawn: the limpid dream’s points of oblivion.’ This additional vocal element is optional and is not heard in the present purely instrumental recording. Prelude to Breaking is one of Per Nørgård’s central chamber music works from the 1980s, when the composer in his structured compositions began to incorporate larger, more chaotic processes. This can be heard in the more loosely notated and partly improvised passage just past the -middle of the work which describes the state of things after the breaking of the wave.

Four Meditations (2010) is based on material from Per Nørgård’s Winter Cantata from 1976 and the arrangement in Winter Music from 1998 of similar musical material. In the first movement, after a brief instrumental introduction, we hear the central melody, which Per Nørgård originally wrote for a poem by Ole Sarvig. This melody, which in principle could easily be a Danish hymn tune from the beginning of the 20th century, is based on selected notes from Per Nørgård’s so-called infinity series with alternations between harmonics and sub-harmonics. Per Nørgård’s melody for Ole Sarvig’s poem ‘As the year goes’, has later been included as number 720 in the Danish hymnal Den Danske Salmebog. The Four Meditations are scored for organ, percussion, winds and cello, which in terms of sonority gives the music a slightly archaic ‘medieval’ character. The -composer has written the following comment on the work: “Four Meditations is a textless suite of short, melody-borne movements arranged from Winter Cantata, but being textless they are quiet, meditative processes with singable lines in the changing instrumentations.”

Arabesques (2011). Of this work the composer writes: “Arabesques for solo percussion was composed for and dedicated to Christian Martínez: small meander-like windings with rhythmic and melodic fluctuations that recall Arab ornamentation – hence the title.” It was inspired by this CD’s last work, Three Scenes. It is the same ascending melodic motif that recurs in both works, and once more the musical saw is played. As a listener one is ‘fooled’ constantly if one looks for a fixed pulse in the Arabesques. The rhythms are skewed, just as fast and slow layers with the same motif are deposited one above the other. It begins with vibraphone and marimba. Later come tomtoms and the sounding saw.

In Three Scenes (2010) the music concentrates on a small row of ascending notes that quickly fan out in a strongly polyrhythmic development. The middle movement has a new feature: a solo for musical saw, which with its floating, singable character must have been an exciting new challenge for the percussionist, Christian Martínez. The saw as an instrument is mainly associated with folk music, and for the composer the sound was a memory of the back yard musicians of his childhood. The saw is surrounded in various proportions by a number of other instruments. The composer has described this as follows: “Three Scenes is a septet with the percussion as the driving force around two trios - CLARINET, HORN and BASSOON in the woodwind group and in the string group, VIOLIN, VIOLA and CELLO. In the first movement, the soloist (the percussionist) interacts with the STRINGS in a rather introverted development. The percussionist plays the second movement SOLO and even gets to perform on the ‘musical saw’ with its wonderful vibrato and atmospheric echo sounds. The third movement starts with the WINDS, to which a dynamic percussion display is added, virtuosically and with an increase in intensity, with the STRINGS finally joining in for the concluding rhythm-borne apotheosis.”

Eva Hvidt, cand. mag.,  is a music journalist and external member of the project staff of the Danish Centre for Music Publication (DCM) at the Royal Danish Library.

Dacapo Records acknowledge, with gratitude, the financial support of The Danish Composers’
Society/KODA’s Fund for Social and Cultural Purposes