Otto Mortensen (1907-86) was one of the finest Danish song composers of the 20th century. His output ranges from simple songs to more challenging art songs. He has written or arranged many songs for choir, and it is not for nothing that he is one of the favourite composers of the Danish choirs. He also wrote a number of chamber music works, a symphony and a few other large instrumental works, but vocal music was undoubtedly the genre closest to his heart. 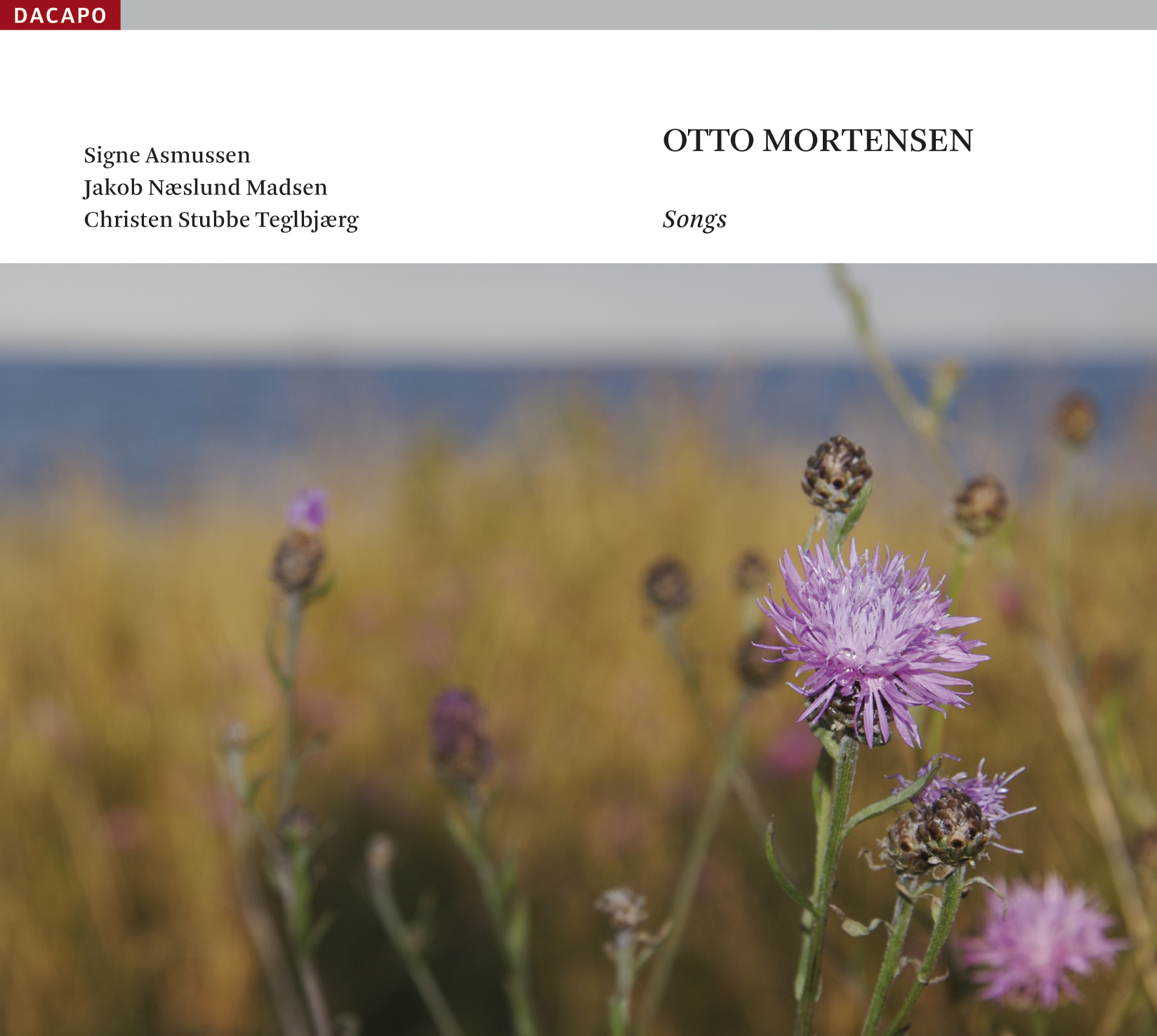 Otto Mortensen was one of the finest Danish song composers of the 20th century. His output ranges from simple songs that are included in the repertoire of the standard Danish ‘High School Song Book' to more challenging art songs that demand great technical skill. He has written or arranged many songs for choir, and it is not for nothing that he is one of the favourite composers of the Danish choirs. He also wrote a number of chamber music works, a symphony and a few other large instrumental works, but vocal music was undoubtedly the genre closest to his heart.

Born in 1907, he was of the same generation as Herman D. Koppel, Bernhard Christensen and Vagn Holmboe; a generation that was educated at the end of the 1920s and began their careers around 1930. Unlike the slightly older composers born just before the turn of the century such as Knudåge Riisager, Finn Høffding and Jørgen Bentzon, they were not pioneers in the discovery of the modern European music that reached Copenhagen after the end of World War I. When they came on the scene the first euphoria was over, and it became a common concern of these young composers that they had no wish to compose ‘modernist' music for ever-dwindling audiences. On the contrary they were inspired by the idea of writing ‘utility music', that is music for which there is an audience, and doing it as well as possible. The craftsmanlike, anti-romantic approach influenced this generation profoundly.

Otto Mortensen was born in Copenhagen, but grew up in Aalborg in Jutland, where his mother, who was a piano teacher, gave him his first lessons. After taking his school-leaving exam he travelled in 5 to Copenhagen, where he began studying music at the university; from January 1926 he also became a student at the Royal Danish Academy of Music in Copenhagen, where he was taught piano by Christian Christiansen, organ by P.S. Rung-Keller and music theory by Knud Jeppesen. His studies at the Academy concluded in 1930 with an examination in piano and organ, while his university studies were shelved. He resumed them in the 1950s, when he became a Master of Arts in Musicology in 1956.

At the end of his training Otto Mortensen was greatly fascinated by Paul Hindemith, who had been one of the first to compose Gebrauchsmusik or utility music. Hindemith had written a number of works intended for amateurs playing together, and was associated with the Folk Music School in Charlottenburg in Berlin. Otto Mortensen went there on a study trip in the summer of 1930 and experienced a new kind of music teaching that he helped to transfer to Denmark. He participated in the rediscovery of the recorder and wrote a number of music books with easy arrangements for ensembles of various instruments. His piano primer, which he wrote with Olaf Jacobsen, also found widespread use.

But at least as important was his encounter with the music of Kurt Weill. When he came home he wrote some songs in the German cabaret style and became the singer Lulu Ziegler's regular accompanist at the beginning of her career. He became involved in the ‘cultural radical' movement associated with Forsøgsscenen (The Experimental Theatre) and participated in the Communist theatrical work in the agit-prop group R.T\. In this period he became a member of the Danish Communist Party, which he left again at the end of the 1930s.

He took his only real lessons in composition in 1934 when he studied with the composer Hanns Eisler, who as a German refugee and Brecht's close associate was living in Svendborg in Denmark in this period. In 1939 a grant made it possible for Mortensen to visit Paris, where he studied instrumentation with Darius Milhaud. But the greatest change in his working life had been in 1937 when he took on a regular job as a repetiteur at the Royal Danish Theatre, a position he held until 1956. Alongside this he taught in 1942-1966 at the Royal Danish Academy of Music in Copenhagen, where he was the head of the Opera Academy from 1959. In 1966 he was employed by Aarhus University, where he taught until he retired in 1974. And it was in Aarhus that he spent his final years until his death in 1986.

Otto Mortensen's choice of texts is characteristic of his fondness for Danish nature poetry, especially by modern Danish poets. And even when he was occasionally inspired by Nordic or English texts, they were often about nature. This is true of the great majority of the poems on this recording; when they are not about nature they are love poems where love is symbolized for example by flowers. Within this universe the ‘Limfjord poets' - not least Thøger Larsen - enjoyed a special position. The Limfjord, with which Otto Mortensen had been familiar from his youth, and the special atmosphere to be found in the nature poems of the Limfjord poets have a tone with which Otto Mortensen sings along like no one else.

It is thus hardly a coincidence that Mortensen's earliest songs were written to poems by Thøger Larsen. This is true of Denmark, the Pale Summer Night now from 1928 and Oh Danish Summer, I Love You from 1932. At this time, when he was otherwise mostly writing songs for Lulu Ziegler, these songs still stood out as exceptions. But they awoke a current in him which made the two decades from 1933 on the most prolific years in Mortensen's song production, although later he regularly composed new songs right up to his death.

Mortensen's way of working meant that he typically wrote the songs individually, only later gathering them in thematic collections. These included songs that had remained unprinted, songs that had already spread through songbooks, and newly composed songs. In that sense they can be seen as musical poetry anthologies where the juxtapositions add an extra element to the totality. The first of these collections was 10 Danish Songs to Texts by Thøger Larsen, L.C. Nielsen, Paul la Cour, J.A. Schade, published in 1940, from which the first nine songs of the recording have been taken. Besides the two songs already mentioned, Summer Storm over Ebeltoft and Signorina! Take My Roses! have texts by Thøger Larsen. The two songs with texts by L.C. Nielsen, Evening Landscape and Spring Weather, were composed as a pair in 3. From the same time come Schade's Early Spring and Paul la Cour's Normandy, while la Cour's Summer Night was composed for the collection.

These were followed in 1943 by the collection 10 Songs to Texts by Nordic Poets, where all the songs, apart from Otto Gelsted's A Drive from 1938, were composed in 1943. The other five have texts by Esaias Tegnér, Gustav Fröding, Ragnar Jändel, Pär Lagerkvist and - slightly atypically (To Spring) - by the Norwegian romantic poet Jens Zetlitz. Here too nature poetry takes pride of place, with the exception of Tegnér's sombre poem The Eternal (1810), which in this context, made topical by the world war, invokes the triumph of eternal truth over force of arms.

The three songs in English have been taken from two small collections, Four Songs (1945) and Three Songs (1946), which Otto Mortensen composed for the American singer Anne Brown. In 1935 she had sung Bess in the world premiere of Gershwin's Porgy and Bess. This was premiered in Denmark at the Royal Theatre in Copenhagen in 1943, and when it was revived after the war she visited Denmark to play the title role. Otto Mortensen got to know her there in his capacity as repetiteur at the Theatre. She added some of the songs to her repertoire. For once these are actual art songs. From the first collection comes Stopping by Woods on a Snowy Evening with a text by Robert Frost, while Adventures of Isabel and Laugh and Be Merry from the second collection have texts by Ogden Nash and John Masefield, respectively.

The collection 7 Songs, published in 1951, is once more based on the work of Danish poets. From this four songs have been chosen, all composed after the war. The earliest is One Summer, across the Wall with a text by Morten Nielsen, the young poet who joined the Resistance and died in 1944. Besides another text by Thøger Larsen, Tom Kristensen and Johannes V. Jensen are represented.

The last songs are not included in any collection, but are among Otto Mortensen's best known and loved. You Gave Us the Flowers with its unmistakable melodic flow is one of Mortensen's most beautiful. It was written in 1937-38 to a text by Helge Rode and since its inclusion in the songbook Folkehøj-skolens Melodibog in 1940 it has appeared in a wealth of songbooks. The same goes for his late summer song All Blue September's Sky, which was written in 1949 to a text by Alex Garff. Finally we have My Darling (1937) with a text by Christian Winther, where the beloved is compared to a reed, a rose and a brook. Here too nature and love are inseparable phenomena.