The music of the romantic outsider Rued Langgaard encompasses the wholerange from Romantic to Modernist styles, and is by turn monumental,expressive, and visionary. The bulk of his modest output for mixedchoir a cappella is found on this CD - an earlier release, which is nowpresented in remastered and improved SACD sound quality. 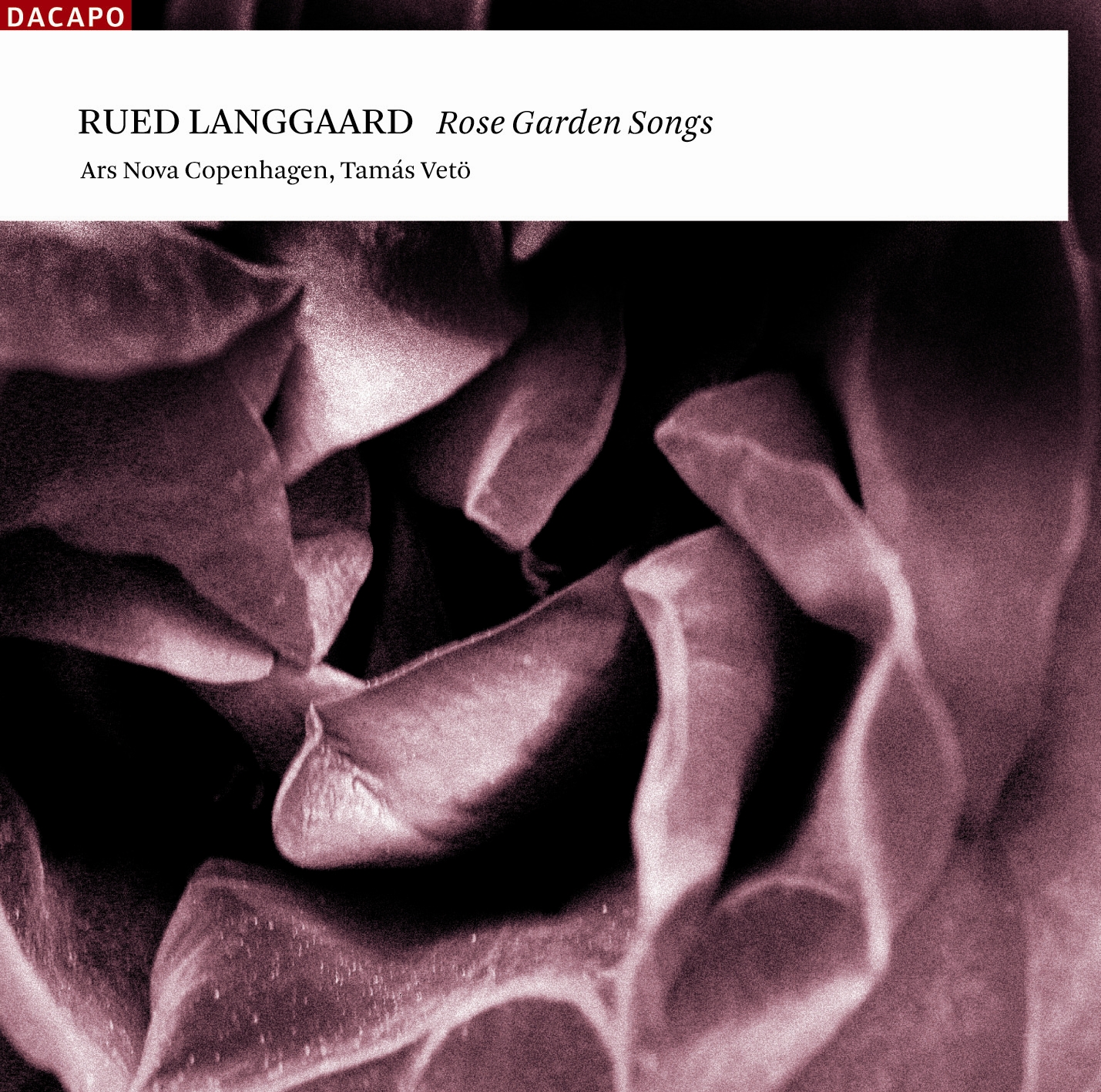 "If your choral collection needs some refreshing, you've found a perfect starting place."
Steven Ritter, Audiophile Audition
"In every way then, this is a lovely disc."
Jonathan Woolf, MusicWeb International
"Admirers of great a cappella singing who don't own these performances are urged to make their acquaintance."
Ronald E. Grames, Fanfare
"There's not an unattractive sound anywhere in the program... Aided by handsome SACD sonics, the choir sounds gorgeous from start to finish."
Philip Greenfield, American Record Guide
"The 12-member Ars Nova Copenhagen under Tamás Vetö is a premiere vocal ensemble, distinguished for its perfect blend, flawless intonation and expressiveness."
Phil Muse, Sequenza 21
SELECT PREFERRED FORMAT TO DOWNLOAD SINGLE TRACKS.
Total runtime:
64 min.

Anyone listening to Rued Langgaard's music today without being fully informed about the history of Danish culture in this century would be surprised to learn that this composer has the status of an absolute outsider. It is, however, a fact that Langgaard never achieved true recognition let alone a position of any significance in Danish musical life, though no one doubted his genuine and utterly unusual talent.

It is only a partial explanation of Langgaard's fate that he was an eccentric and quite devoid of the ability to ‘sell himself'. Just as significant was the fact that he had an uncompromising artist's nature and refused to accept the ‘modern' spirit of the times, that is to say the anti-romantic view of art which prevailed in Denmark in the period between the two world wars. Langgaard's ideals were those of the turn of the century, with late romanticism and symbolism as principal ingredients. He had an elevated and pathetic conception of the artist and his role that was in many ways foreign to the down-to-earth Danish mentality.

Rued Langgaard was born in 1893 as the son of a Copenhagen piano teacher who enjoyed a good reputation at the time. The elder Langgaard was also active as a composer, and was incidentally much given to theosophical speculation. The mother was likewise a pianist and Rued Langgaard received his elementary musical education from his parents. He made his debut as an organ improviser in Copenhagen in 1905, when he was only 11 years old, and his first large-scale work for choir and orchestra was performed when he was 14. But this turned out to be a bad start for the young composer, for the reviews were negative and Langgaard in fact never succeeded in being properly accepted either by the press or by the Danish musical establishment.

When Rued Langgaard completed his hour-long First Symphony in 1911, it accordingly proved impossible to have it performed in Denmark. But his parents had taken him on several study visits to Berlin, and the family's contacts with conductors like Arthur Nikisch and Max Fiedler resulted in the symphony being premiered in 1913 by the Berlin Philharmonic Orchestra under Fiedler. The great enthusiasm with which the 19-year-old composer's work was received on that occasion did not, however, result in the work being played in Denmark, and the outbreak of war in 1914 prevented Langgaard from capitalizing on his German success.

Because of the scepticism with which his music was regarded at home, Langgaard continued to have difficulty in getting his music performed and had to promote concerts himself in order to obtain a hearing. His significant artistic development in the decade after the First Symphony remained unobserved by critics and public alike. Important experimental works such as Sinfonia interna (1915-16), Sfærernes Musik (1916-18), the Sixth Symphony (1919-20), and the opera Antikrist (1921-23) were not performed in Denmark or, if they were, were not understood.

Rued Langgaard was the only Danish composer who strove for a symbolistically based, visionary form of musical expression in continuation of the romantic tradition, as we find it elsewhere for example in the music of Scriabin. The trend in Denmark was toward complete rejection of the late romantic spirit, and Langgaard had to return to Germany to experience successful performances of his symphonies at the beginning of the 1920s. However, there was no widespread or general interest in his music in Germany either, and it gradually ceased to be played.

The years around 1924-25 are an important turning point in Langgaard's life and music. For a number of years he had been receptive to trends in the most recent music, not least the progressive works of Carl Nielsen, but now he altered course and practised a romantic, pastiche-like style with Niels W. Gade and Wagner as models. He stated publicly that he felt betrayed by the times and the musical powers-that-be, and he attacked Carl Nielsen who in his opinion enjoyed an altogether exaggerated guru status. The result was that Langgaard was subjected to a massive boycot: after 1930 his works were only very exceptionally included on concert programmes (though they were played a good deal on the radio, especially in the 1940s), and he was consistently turned down when he applied for jobs as a church organist. Not until 1940 did he manage to obtain a position as organist at Ribe Cathedral in Southern Jutland. By that time he was 47. His Ribe period marks a new phase in his compositional development, with frantically defiant and even absurd elements occupying a prominent place.

After Langgaard's death in 1952 his name was temporarily forgotten, but the 1960s brought a new interest in late romantic composers who had been ‘overlooked', and it was realized that though Langgaard was essentially a conservative composer his music nevertheless possessed characteristics strangely anticipating contemporary static music, collage, and minimalism. Many of his 431 compositions have now been recorded, his works have been exhaustively catalogued and a biography published in 1993, the centenary of his birth, has thrown new light on the life and music of this remarkable individualist.

Langgaard as a choral composer

With the 16 symphonies composed between 1908 and 1951 it is understandable that Langgaard is first and foremost regarded as a symphonist. Many of his orchestral works do however have choral elements, including three of the symphonies and the major work Sfærernes Musik. Of his modest output for mixed choir a cappella, the bulk is recorded on this CD, which also presents a selection of the composer's four-part hymns. Unlike almost all other Danish composers of his generation, Rued Langgaard made no contribution to the burgeoning amateur music movement, which was among other things a result of Carl Nielsen's and Thomas Laub's epoch-making work to strengthen the Danish national song tradition. But this popular educative and pedagogical effort held no interest for Langgaard, and he had no contact with the key figures in these circles.

The choral pieces he wrote in the 1910s were thus hardly created with a particular group of performers in mind, and only a couple of contemporary public performances are known. It was only in 1940, when Langgaard obtained the post of organist and precentor at Ribe Cathedral, that he came to work with choirs and had the opportunity to write choral music for practical use.

The relatively few religious songs and hymn melodies are spread across the whole of the composer's creative life, and range from a sentimental mission-house-like song such as Når engang i fjerne tider (When, One Day in the Distant Future) to strict chorale pieces like Tordner det fra mørkets sky (It Thunders from the Cloud of Darkness). This piece is also included as the final chorus in the first section of Langgaard's important organ work Messis.

In any case Langgaard took a stand both in polemics and in his music as an opponent of the reform of sacred music that made great strides from the 1920s on in Denmark, and which meant a weeding-out of the Romantic repertoire in favour of the melodies of the Reformation and new tunes written in the same spirit. Langgaard's hymn tunes almost all ended up in his desk drawer. One of them (not included on this CD) was however incorporated as a congregational song in Ribe, while Tusind år stod Kristi kirke (For a Thousand Years the Church of Christ) was written as an occasional song and first performed at the celebration of the Danish bishopric's millennium in Ribe Cathedral on 25th May 1948.

In compositions like Høstfuglen (The Harvest Bird), in the very distinctive Bag muren sidde de roser små (Behind the Wall Stand the Little Roses) from the Rose Garden Songs and in the hymn tune Den store mester kommer (The Great Master Is Coming) one notes that Langgaard's forte as a composer is in the areas of harmony, timbre and form, rather than melody.

Most of the motets were deliberately composed by Langgaard as a continuation of the Romantic style of Niels W. Gade. However, this is only partly true of In memoriam Ansgarius, which has a clear ‘Gregorian' element. This motet was originally written for a radio programme from Ribe Cathedral in 1943, but was later performed at several celebratory services, including the above-mentioned millennium celebration in 1948.

None of the pieces recorded here was published during the composer's lifetime. But today several of them are in print, viz. the Rose Garden Songs. The manuscripts for the others are in the Royal Library in Copenhagen. The end of the composer's fair copy of Tusind år stod Kristi kirke has however disappeared, and the last ten bars have had to be reconstructed by Ivan Hansen of Ars Nova on the basis of a sketch.