Danish composer Jeppe Just's music is about recycling, nostalgia, instruments - and toys. On this portrait album curated by the chamber ensemble SCENATET, the composer himself appears with his unusual \band\\ Jeppe Just Instituttet playing on self-invented, home-made and toy instruments like egg slicer, coffee grinder, toy piano and melodica. Together, the two ensembles create a unique and delicate sound-world which is both the special starting point for the music and the source of its constant fascination. 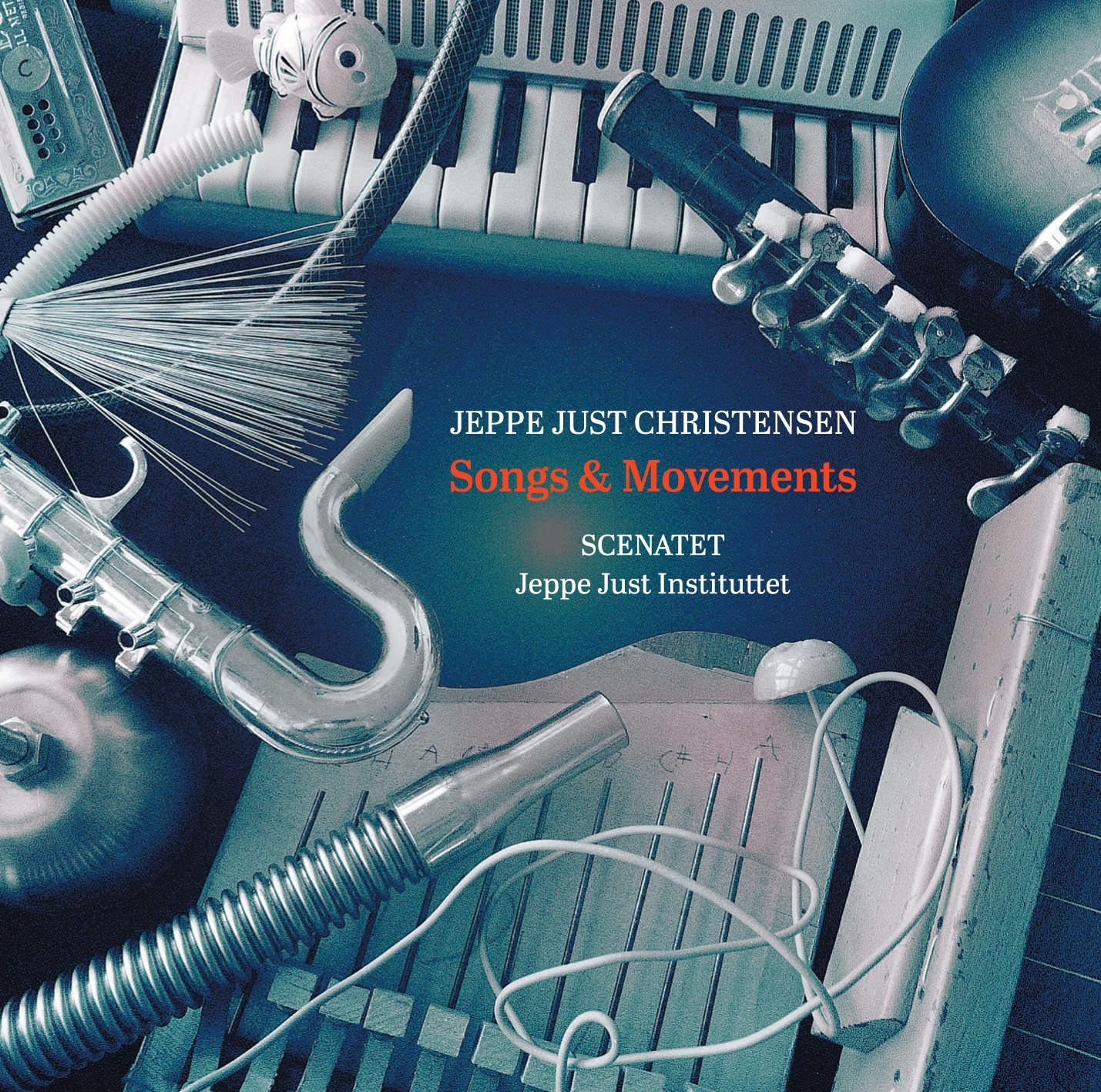 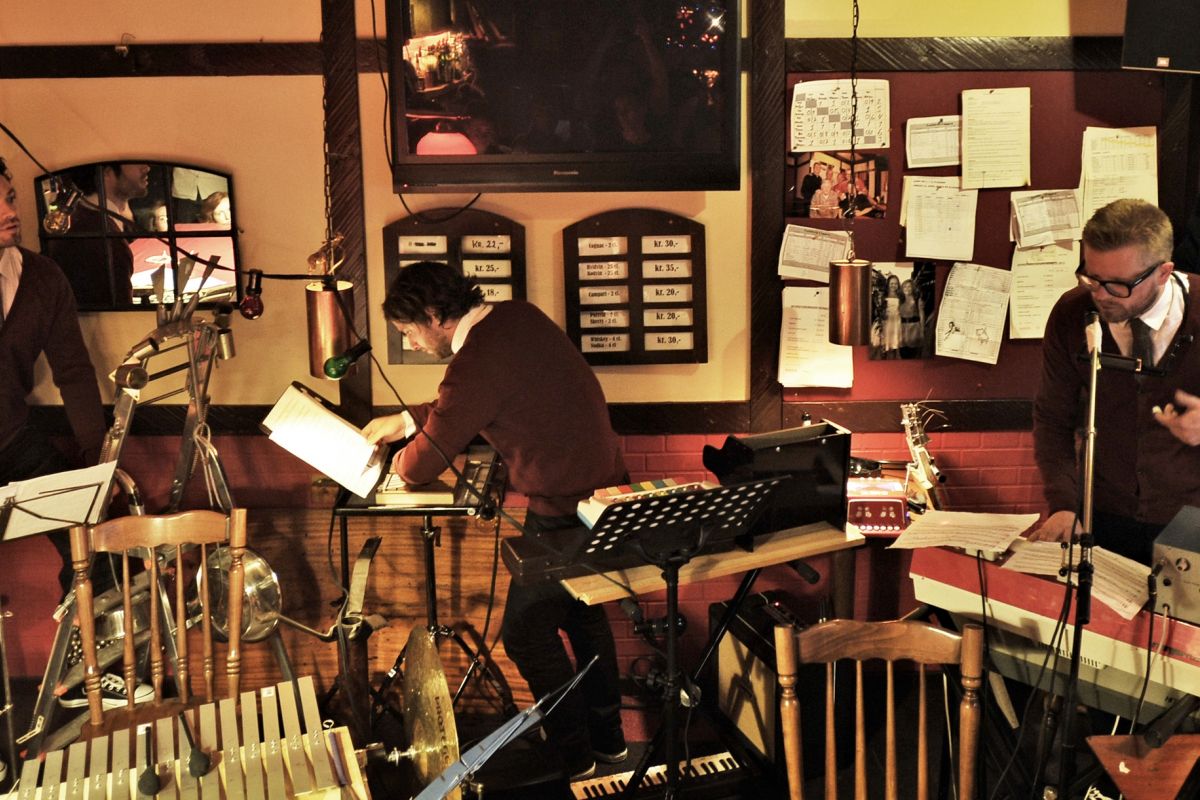 The instruments’ own music

The sounds waver in Jeppe Just Christensen’s new music. Not that they are played inaccurately, but the instruments’ natural tuning is a little strange, and the music is built up simply and sonorously with a wealth of colours, so one feels one is in a market place in the old days with barrel organs, accordions, harmonicas, saws, organs and lots of clanking percussion. These are not sounds you normally associate with contemporary music, and you wonder how something can feel so original and so homely at the same time. What is it?

You can get part of the explanation if you are fortunate enough to pay a visit to the man’s workroom. It is full of special home-built or modified instruments that you can blow, pluck, breathe into, hammer on etc. For example there is a toy piano on the floor, but no ordinary one. In the first place it can slide from side to side, because it is mounted on a metal string. And then you don’t play on the small keys with your fingers. Instead you strike the notes with a gadget mounted on a bar mounted on a pedal.

The piano plays a role on the CD in the same way as many other more or less home-made instruments. So it can be used to understand some of the original features of this 37-year-old composer’s new music. For him his music – the latest music in particular – is about recycling, nostalgia, honesty – and toys:

“Like so many composers I tried earlier to get as much as possible out of the instruments. For example with new playing techniques. But then things took a new turn. Why not add something to the instruments instead? But it’s also about toy instruments and vintage things from the fleamarkets, and for example I’m also very keen on melodicas and mouth organs. They all have their own sounds. Once I’ve found an instrument, I can hardly help using it. I like the way the instrument has a history and its own sound. There are some challenges, and I must relate to them”, says Jeppe Just Christensen.

In other words there is first an original instrument or a thing that can function as an instrument. In the example with the little toy piano it is a bit noisy and out of tune; all the same it becomes the starting point for the work as a composer. A kind of work that is about very intuitively or honestly listening for the right thing. Because the instruments are there first, the music becomes his way in – but not to something he thinks up, like a composer with a blank sheet of music paper, or one who conjures melodies forth at a piano to arrange them for instruments afterwards:

“When I make music, I record it first. Because I have the instruments, it becomes very specific. Then I can hear how it sounds. I don’t write very much down when I work, because that spoils the working process. Then afterwards I have to transcribe the music”, says Jeppe Just Christensen and traces a line back through his career.

“The instruments have become more and more important to my music. In Movin’ from 2005, for example, I have a guiro [a piece of wood with grooves, ed.], which runs through everything. In Douglas from 2009 there is a single home-built instrument: a ladder. So now I am going all out with a whole lot of rebuilt and home-built instruments.”

A characteristic feature of the rebuilt instruments is that the musician and the instrument can do a little more than that what was originally intended with them. In the case of the toy piano the metal string on which it slides from side to side is also a kind of guitar on which the musician can play various notes, and the tuning of which funnily enough follows the piano up and down. And since the piano is operated with a foot, the musician has his hands free to play on other instruments at the same time, the way we know from street performers.

The three pieces on the CD have all been written for Scenatet’s musicians – on the latest and longest piece, Three Songs in 9 Movements, with Jeppe Just Christensen and the two percussionists David Hildebrandt and Matias Seibæk from his group the Jeppe Just Institute in central roles in all the movements:

“In the Jeppe Just Institute we work with the simplest things. For when the other two sit at the pedal harmonium and play, we have had a turning stand made so they can rotate at the same time. Or we have coloured lamps that can blink in time with the music. We’re on the point of it being too much”, he says as an intro to the new work.

In Three Songs in 9 Movements the nine movements are grouped three, three and three. That means that the melodies and chords are of the same material in movement one, four, seven etc. The listener can easily hear that along the way. The music is put together with traditional and home-made instruments – and a few instru­ments that don’t normally belong in classical music like ukuleles, melodicas and mouth organs. But despite all the new instruments the soundscape is in a way still very simple:

“For me it’s also about going back nostalgically to my own childhood and being honest about the sentimentality and the soup, roast and ice cream culture that was also a part of my family. Some of it is related to the fact that I myself now have children. So I buy toy instruments or just some toys for them, and then they get included in the music.”

The starting point was different with the oldest work on the CD, Movin’, which is in two movements, but where the last is almost just a conclusion that rounds off the work. The soundscape is tighter, but also has whole array of percus­sion sounds:

“Movin’ is in a way about repetitions. About minimal variation – that is, what really happens in a repetition. A musician can’t play exactly the same way twice in a row, and a repetition is always something new, because it happens with a consciousness of what has happened just before”, says Jeppe Just Christensen, and explains the situation when the piece was composed:

“I wrote a minute and a half, and then put some very long repetitions in throughout the piece. For example in bar 3, which is repeated 15 times. It was an experiment that turned out to work. There is no melody, but the winds have kept some of the theme from John Coltrane’s Giant Steps. By the way, the percussion is played on a Braun coffee grinder, as an extra kick for the sound in the small second movement.”

A sinus tone and a collapsible ladder rebuilt with springs and putty knives are central elements in the piece Douglas from 2009, which uses sound from reality to create a connection where there is none to begin with:

“I flew from Iceland and heard a strange wailing note with a cracking sound along the way. The steward said that this was quite normal. Douglas is an attempt to reproduce that experience, as my first work with rebuilt instruments interacting with nine musicians. The second movement has a long solo for the ladder, where a viola theme that comes from the experience of a Swedish ice cream van also plays an important role. The last movement is a small chorale with a ladder noise that sounds like a dog barking.”