Rolf Hind, Esbjerg Ensemble, Christopher Austin
The Latin palindrome that frames Anders Brødsgaard's powerful piano cycle In girum imus nocte et consumimur igni, means 'we circle in the night and are consumed by fire'. It is searingly intense music that surrounds and holds the listener with a maelstrom of hypnotic circular movements. Along the way we encounter movement titles like Joker, Bacchanal and PyroMania, bearing witness to the unflagging energy that permeates Brødsgaard's music, and which comes to full expression in the English star pianist Rolf Hind's new premiere recording. The CD also includes Anders Brødsgaard's piano concerto, in which Rolf Hind is accompanied by the Esbjerg Ensemble conducted by Christopher Austin.
Buy album 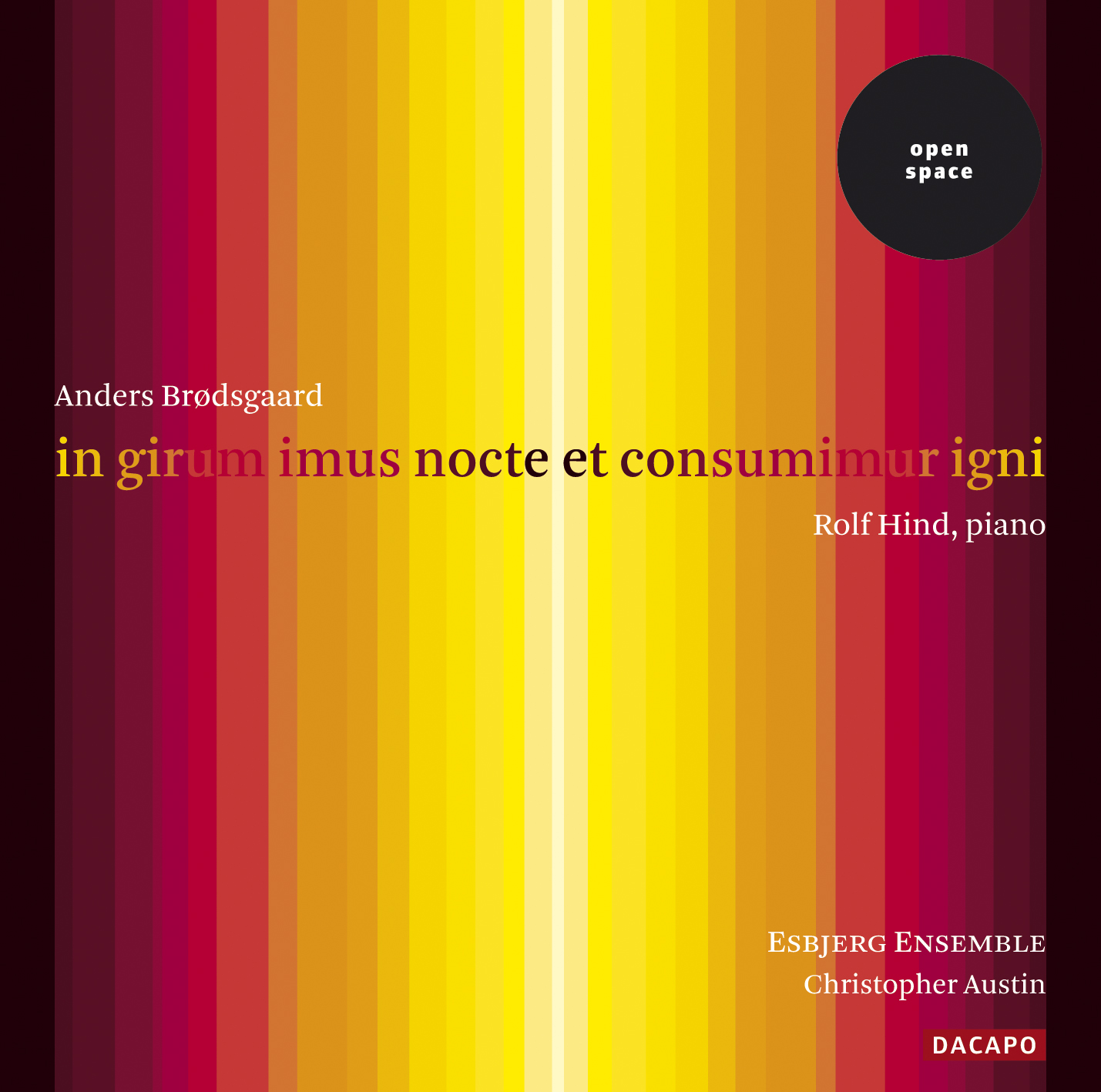 Anders Brødsgaard (b. 1955) trained both as a pianist and composer. As a teenager his idols were The Beatles and his favourite instrument was the guitar, but when he was admitted to the Carl Nielsen Academy of Music in Odense in 1974 it was as a piano student. It was mainly modern music that attracted him, so he also took lessons from the Hungarian-born Elisabeth Klein (1911-2004), herself a pupil of Bartók, and a pioneer of modern piano music in Denmark. Brødsgaard also went to the famous avant-garde summer courses in Darmstadt, where he studied with the pianist Herbert Henck.

Anders Brødsgaard began composing as early as his first years of studying. He has always had a fondness for modernism, and his earliest works are among his most modernist. The serial music of the 1950s, especially the ground-breaking works of Stockhausen, inspired him to write a number of thoroughly structured pieces. From this phase comes the orchestral work Variations from 1979 (orchestrated in 1983), which was given its first performance by Esa-Pekka Salonen and the Oslo Philharmonic.

In the mid-1980s he experienced a crisis as a composer. I was stuck. It has always been a very secretive or private matter for me to compose. I went around thinking up giant works that took me years to write down - if it was at all possible... Karl Aage Rasmussen taught me to take life a little easier,\ Brødsgaard said in an interview ten years later.

The reorientation can be heard in the more direct and instrumentally oriented style that began with among other things the chamber work Poltergeist (1989) and the piano piece Joker (1990). In these the fundamental musical phenomena tonality and pulse are once more important, and Anders Brødsgaard has worked further with them in subsequent years. The natural relationship between pulse and tonality lies behind all the works on this CD.

Joker from 1990 is already something of a classic in contemporary Danish music. The piece was the cue for Brødsgaard to write a whole series of piano works that in the end formed a cycle which even comprised a piano concerto. This was a work-in-progress that lasted five years. The overall title of the piano cycle only came, however, in 2007: in girum imus nocte et consumimur igni - a Latin palindrome that fits well with the structure of the cycle, and which can be translated:\\We enter the circle at night and are consumed by fire\\.

In Joker and the next piano works Brødsgaard uses a composition system based on the relationship between the intervals in the harmonic series. The principle is as follows.

A sounding note is a complex of a whole series of harmonics. The first harmonic lies an octave above the fundamental, the next is a fifth higher again, the next a fourth above this, the next again a major third higher, and thus the harmonic series continues in ever-decreasing intervals. High up in the series, the harmonics are at semitone intervals, and it is thus possible to find all the ‘black and white keys' in the series.

The frequencies for the successive harmonics have the same ratios: 2:3, 3:4, 4:5 etc. It is these arithmetic ratios that Anders Brødsgaard uses in his pieces. The interval between the second and third note in the harmonic series is a fifth, while at the same time the frequency ratio, understood as rhythmic values, corresponds to two beats against three. The next interval in the series is a fourth, which corresponds to three beats against four, etc.

In this way Brødsgaard builds up pieces where both the pitches and the rhythms are derived from the harmonic series and are therefore physically speaking closely related. Despite the complex results that arise along the way in Brødsgaard's music, the relationships among the factors provide a sense of totality and in some of the pieces a ‘natural sound' that is in no way daunting. The continuity in Brødsgaard's piano cycle is reinforced by the fact that all the pieces are based on the harmonic series for the note E.

As a result of the rhythmic proportions it is also possible for Brødsgaard to derive the overall form of each single piece. Joker is based on the series of ratios 2:3:5:7, and this means that the four different rhythmic layers - after a sequence of complex displacements - meet in the end after 2 x 3 x 5 x 7 beats - that is, a total of 210 beats. In principle the piece could then be over, but in Joker Brødsgaard repeats the process eleven times = 2310 beats.

After each round of 210 beats (in sixteenths, which is the pulse value of the piece) Brødsgaard inserts his ‘joker', which forces the music out into a new round. The eleven jokers thus form a ‘hidden' 11-layer in the music beneath the other four layers.

The tonal material is the 2nd, 3rd, 5th and 7th notes in E's harmonic series (= E, B, G# and D). The ‘joker' appears with the note Bb, corresponding to the eleventh place in the selected harmonic series.

After the eleventh and last round, the piece is concluded with five extra bars as if to suggest that a new round could begin - and as we know it became a whole cycle of piano pieces!

Brødsgaard calls his system an inspiration, not a predetermination. The proof is the pieces themselves, which are all very different in character and structuring technique. They all focus on different aspects of the same system. While Joker, with its pianistic style and sound, recalls Keith Jarrett's improvisations (greatly admired by Brødsgaard) the next two pieces, Attacca and Requiem (1992), are quite different.

Attacca is a wild eruption (Brødsgaard labels the score \\Furioso, quasi senza controllo\\!), characterized by clusters in quick, abrupt succession. It begins with a chord based on a selection from the highest - and most dissonant - end of the harmonic series. Gradually the pitch descends and the tonal material changes at the same time to a more consonant selection. Towards the end of the piece the motion ascends again and the eruptions of energy rise to ffff.

Requiem is just the opposite in every way. Unlike the other pieces in the cycle it is not based on additive but on divisional rhythm - that is, a pre-selected duration is divided into smaller units (1/2, 1/3, 1/5 etc. of the total length of the piece) instead of the piece being formed from small units that are multiplied up.

Requiem was written in memory of the composer's father and is \\about hearing voices,\\ says Anders Brødsgaard. The voices from afar are expressed by among other things a ‘silently struck' chord that is kept freely resonating by means of the piano's sostenuto pedal. The focus note of the chord is G#, which - once struck - sets the strings of the ‘silent' chord resonating sympathetically. Like an Aeolian harp, the grand piano is thus transformed from an active instrument into a passive sounding body that receives and intensifies the vibrations of the surrounding world.

Other strange, external sounds come from touching the strings of the piano and from knocks on the outside of the instrument.

The next two pieces in the cycle are situated, like Attacca and Requiem, in two quite separate spheres. With PyroMania we are in a febrile, Scriabinesque sound-world - or is it a tribute to Debussy's Feux d'artifice? The right-hand arpeggios are fused with the left-hand melody line, and according to the composer must not be heard as separate parts. Bacchanal, on the other hand, takes place from the waist down - below the belt, so to speak. The piece unfolds at a low pitch based on ostinato-like effects with heavy rhythmic accentuations and a funky beat that comes from rock music. Like a kind of solo cadenza, reminiscences of Joker appear halfway through the piece.

In 7-9-13 structural thinking meets numerology. In many cultures the figures 7, 9 and 13 are magical, and in Danish tradition at least the phrase ‘7-9-13' is used to ward off bad luck (like ‘Touch wood!'). Brødsgaard bases the piece on the 7th, 9th and the high 13th partial in the harmonic series (still with the fundamental E) - that is D, F# and C#. With an interpolated 11th partial (A#) a quotation from Beethoven's last piano sonata (!), opus 111, is formed, which is heard in the first bar. The model, Beethoven - whose portrait hangs above the door of Brødsgaard's study - is thus unproblematically ushered in as a reinforced protection against bad luck.

Another idol, the French composer Olivier Messiaen, receives homage in the piece Hymn; a piece which has been a work-in-progress in its own right: for a period Brødsgaard preferred to split the piece into a Hymn I and a Hymn II, but for this recording the halves have been re-united as in the original version from 1994. The basis is the frequency ratios 6:7:11, which are completed twice. Messiaen used motifs from birdsong in several of his works, but was also a pioneer in the development of an advanced serialism where among other things articulation and dynamics were used serially. Brødsgaard bases his homage piece on the elements melody, chords and staccato, and has the birds' voice whistle a little greeting across the second half of the slow development of the music.

The Piano Concerto is based on the same arithmetical ratios as Joker(2:3:5:7:11), but besides this is split up into three layers with the ratios 3:4:5. The three layers are distributed over woodwinds, brasses and strings, each with their own pulse unit: the 3-layer moves in triplets, the 4-layer in sixteenths the 5-layer in quintuplets.

Basically, the construction is again simply a grid for the tonal and formal relations, but the extra layers in the music inevitably generate a much more vibrant, polyphonic vitality in the Piano Concerto. Nevertheless, the individual voices of the instruments mix in a broadly unified way.

At the beginning of the concerto one can clearly hear the three layers entering one at a time. After that the polyrhythmic displacements begin to live their own life, but meet emphatically right at the end.

Although the Piano Concerto unfolds in one uninterrupted process, it is also possible to hear it as three contrasting ‘movements' (fast-slow-fast). In fact one's thoughts stray more than once to a Neoclassical masterpiece of the genre, Ravel's Piano Concerto in G major. As in the Ravel work, in Brødsgaard's Piano Concerto there is a virtuoso, idiomatic solo voice, a small orchestral ensemble with many soloist passages, a melodious and bluesy ‘second movement' and a brief, toccata-like ‘final movement'.

Brødsgaard succeeded in achieving complete freedom within his self-imposed system. As Arnold Schoenberg said when he had to explain why the twelve-tone system was no limitation: \\You follow the tone row and otherwise compose as before.\\