Throughout his composing career, the dark tone of the viola fascinated Axel Borup-Jørgensen (1924-2012) and was a rich resource for the expressive world of his music. In the works on this CD, one hears the development that Borup-Jørgensen underwent, from the highly accessible and nature-lyrical Duo for Violin and Viola Op. 12 through the clearly more abstract-sounding Mobiles after Alexander Calder Op. 38 to the intensely lyrical and richly detailed O Bäume Lebens op. 81.

The CD is recorded by a number of Denmark's leading interpreters of new music with the violist Anette Slaatto in the centre, together with Christina Bjørkøe, Signe Asmussen, Helge Slaatto, Mathias Reumert and EKKOZONE. 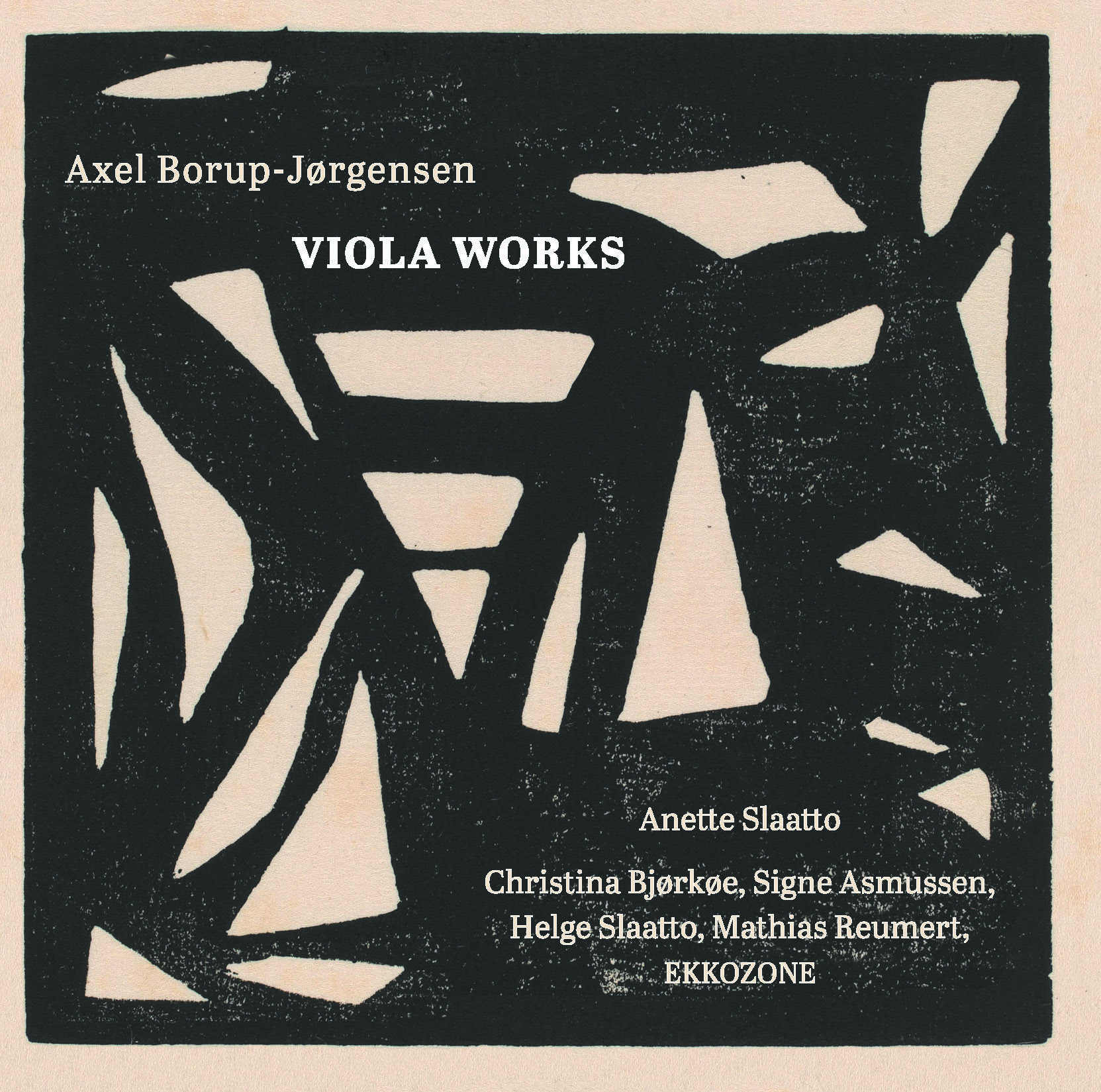 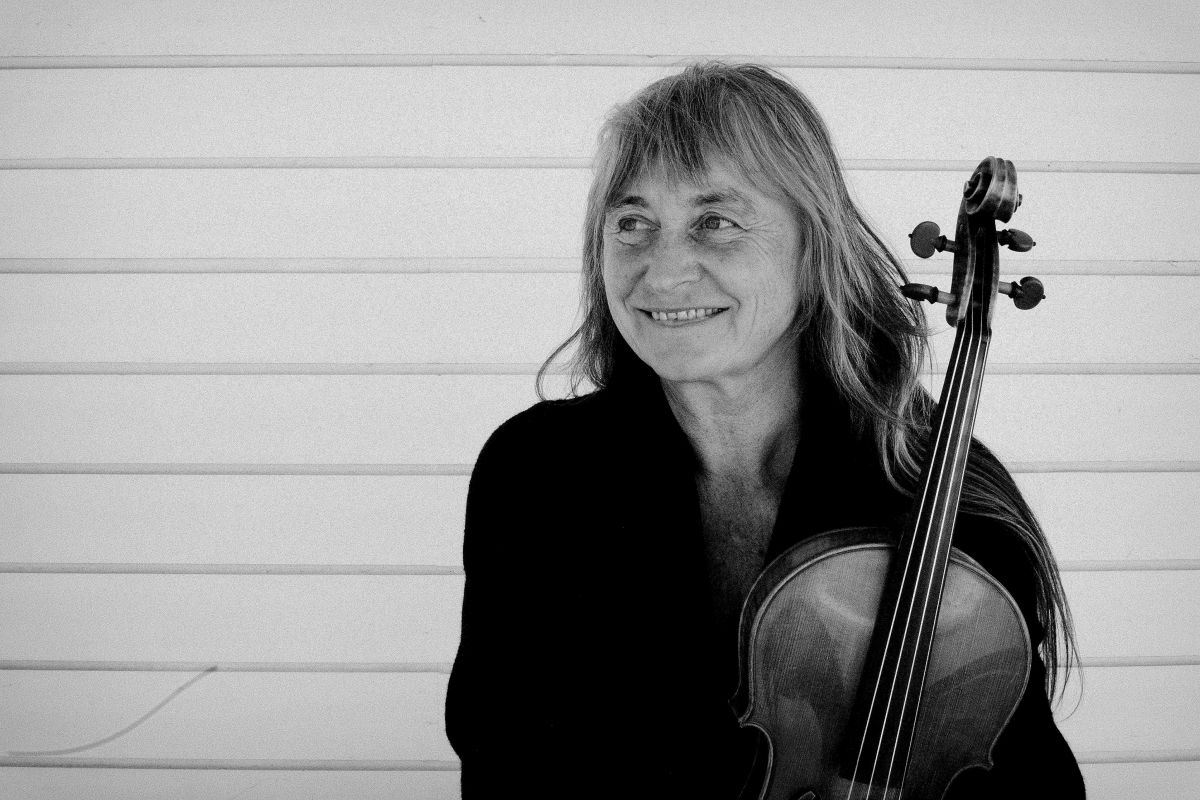 Axel Borup-Jørgensen and the viola

Axel Borup-Jørgensen (1924-2012) was born in Denmark, but grew up in Sweden and was crucially influenced there both by the magnificent landscape and by the intro­verted or melancholy tone of the Swedish poets and Swedish music.

When he was in his early twenties he returned to Denmark, where he began studying the piano at the Royal Danish Academy of Music in Copenhagen. Niels Viggo Bentzon, Poul Schierbeck and Jørgen Jersild taught him instrumentation and the theory of musical form and at the end of the 1950s he attended the famous summer courses at Darmstadt and was taught there by among others Wolfgang Fort­ner. Before his journey to Darmstadt, which he in fact repeated in 1962, Borup-Jør­gen­sen had taken his music teaching diploma and made his living as a piano teacher. As early as the end of the 1940s Borup-Jørgensen’s works were performed at among other places the Young Nordic Music festivals. With his lyrical tone and experimen­tal curiosity he built a kind of bridge between tradition and modernism – between the music of the past and the expression of the present. He did not do so by relating specifically to the musical styles of earlier times in his works – no stylistic pluralism is to be found in Borup-Jørgensen’s music – but by insisting on an organic concep­tion, a sense of natural growth in the music, which indeed, for all its atonal musical language and modern sounds, always has cohesive power.

Borup-Jørgensen attracted attention not least with the major orchestral mas­ter­­piece Marin, which he finished in 1970. His activity as a composer, however, has mainly concentrated on chamber and ensemble works, in which his sensitivity to sonorities and his will to insist on lyricism, nature and melancholy without com­pro­mising on clarity and drive were characteristic.

In the works for viola on this CD one can experience some of the develop­ment that Borup-Jørgensen underwent, from the highly accessible and nature-lyrical Duo for Violin and Viola Op. 12 through the clearly more abstract-sounding Mobiles after Alexander Calder Op. 38 to the intensely lyrical and richly detailed O Bäume Lebens Op. 81.

The unifying factor for all these works is of course the viola, an instrument that the composer knows how to exploit across the whole spectrum from the singing to the darkly snarling. Borup-Jørgensen’s striking use of the viola so many times throughout his composing career shows that the dark tone of the instrument has fascinated him and has been a rich resource for the expressive world of his music.

In Partita for Solo Viola Borup-Jørgensen displays his love of the instrument in earnest. The forest-dark sonority and the warm intensity are in focus, and the instrument (and the musician!) are permitted to demonstrate expansiveness, ele­gance and virtuosity. The five movements are different in character, almost con­trasting, but the expression of the work as a whole is serious and insistent. It is rarely relevant in Borup-Jørgensen’s music to speak of musical storytelling, for his music is far more often lyrical than narrative, and is typified more by nature moods or sensory experience than actual stories. This also applies to the Partita from 1954. The title itself also points away from the narrative, romantic and epic, back to the solo suites of Baroque music of the kind we know from J.S. Bach, for example: a series of movements with intense musical content and room to display the abilities of the soloist. After the relative seriousness and intensity of the first four movements, the second part of the last movement launches a fast, clearly more virtuosic and out­ward-looking presto section which creates a contrast with what went before, and an effective conclusion.

Music for Percussion and Viola, Op. 18

Although it is not evident from the title, the work is composed for viola, percussion and piano. The music is full of power, energy and unrest, and each of the three instru­ments or instrument groups comes through with its own strong character, although the piano is often used as a percussion instrument in line with the true per­cussion instruments. The interaction of the three characters gives the work its energy, and it develops powerfully in the course of the good twelve minutes or so the work lasts. Central to the work is the viola solo, which alternates between wide leaps and close, stepwise passages. The solo is as intense as a dirge, with despairing cries, but also has a serenity and an energy that colour the music more brightly and suggest a more complex expression.

The viola solo comes after a fierce beginning in which the piano and percus­sion predominate and the viola has to shout loud to be heard amidst the din.

But this does not last. The end is swinging and elegant, and all three instru­ments invite the listener up to dance. As a listener one is not sure whether the viola is dancing voluntarily or has been forced into a pattern by its two muscular team-mates.

Music for Percussion and Viola, composed 1955-56, is rhythmically and formally marked by contrasts, but never in black and white. In between each of the striking statements there is a bridge, or an outstretched hand that links the music from the first note to the last through a highly varied landscape.

The composer wrote the following note in the score for O Bäume Lebens from 1977:

“O Bäume Lebens takes the form of a triptych in which the lengthy prelude and postlude for the viola form the wings; the middle passage is based on the introduction to Rilke’s Fourth Duino Elegy”:

O trees of life, O when are you wintering?
We are not unified. We have no instincts
like those of migratory birds. Useless, and late,
we force ourselves, suddenly, onto the wind,
and fall down to an indifferent lake.
We realise flowering and fading together.
And somewhere lions still roam. Never knowing,
as long as they have their splendour, of any weakness.

As an anticipatory pre-echo, Borup-Jørgensen has the soprano hum along with the prelude and similarly as an echo in the postlude. The effect is as if we listeners are standing still (along with the viola?) as a singer slowly comes walking past us. First we hear a hint of the voice, then we hear the aphoristically short song with Rilke’s always enigmatic text, and slowly the singer disappears again.

The hinted and the sensed are hard to bring into focus, but in his music in this work Borup-Jørgensen is able to focus on what is vanishing, what cannot be fully seen.

Sonata for Viola and Piano, Op. 14

Many texts about Axel Borup-Jørgensen’s music, including the present booklet, emphasize Borup-Jørgensen’s lyrical and poetic expression. But as can be heard in the first movement of this sonata for viola and piano and in many other works by Borup-Jørgensen – also on this CD – his music has always had a strong rhythmic focus. Percussion and percussively-used piano play a major role, and Borup-Jørgen­sen’s ability to make use of the sonorities of the percussion is great.

There is no percussion in this sonata (1953), but the rhythmic – in fact highly impact­ful – element in the first movement is obvious. Even the second movement, which is a forest-dark, almost mystical viola melody, contains percussive elements in the chiselled chords of the piano. The sonata is built up in a highly classical style with a fast movement first and last, and a slow one in the middle. However, it has no classic bravura ending, but a reflective afterthought where yet another important ele­ment in Borup-Jørgensen’s music plays its part: the silence between the notes.

for viola, marimba and piano

Alexander Calder (1898-1976) was an American sculptor who became famous for his mobiles, in which the focus was on motion and the changing relationships between the indivi­dual parts of the mobile sculptures. In a way Calder’s mobiles involve time in the experience just as music does, since the sculpture changes while the viewer remains still. Calder’s mobiles in particular, or mobiles as such, have inspired several com­posers, and thus also Axel Borup-Jørgensen in 1961. Each of the three musicians has a number of sounding mobiles which they must play through. Each musical mobile consists of groups. At the beginning of the score, the composer describes how the music is to be performed:

At the same time the three musicians are urged to position themselves at a distance from one another when the music is to be performed – at least 3-4 metres between each musician and the next, the composer prescribes. This will of course emphasize the spatial aspect of the work, and thus also the similarity to Calder’s silent mobiles. In this way Borup-Jørgensen creates sounding, spacious mobiles in which each part casts shadows or sheds new light on the others.

As is evident from the note in the score, there is also a certain freedom of choice in the work. The spaciousness and the unpredictability in this work under­score the poetry that is always present in Borup-Jørgensen’s music. The music is aphoristic, brief and succinct.

In Duo for Violin and Viola, which like the later Partita for Solo Viola is built up as a suite with five movements, the two instruments move like inseparable travelling companions throughout the work. They are not each other’s opposites or contrasts; on the contrary they are extensions of each other. There is hardly a motif which does not in some way appear in both instruments. They chase each other’s fragments of melody, repeat and interweave with each other. It is as if Borup-Jørgensen treats the two instruments as one; in their expression and musical building blocks they stay close to one another no matter whether the violin or viola is playing.

The duo from 1951 is the earliest work on this CD, and in a way also the most traditi­onal, but there are characteristic features such as the rhythmic drive which will never be predictable, and the melancholy mood of the slow movements, which clearly and originally manifests Borup-Jørgensen’s characteristic composing voice.