Prodigiously gifted Danish composer and pianist Niels Viggo Bentzon (1919-2000) wrote nearly 1,000 musical works in every known classical genre and style. He retained a constantly questing and exploratory nature throughout his life, as we can hear in his five known wind quintets recorded here by The Carl Nielsen Quintet: The results are captivating in their own way, stoked by Bentzon’s distinctive, virtuosic language and great ingenuity. 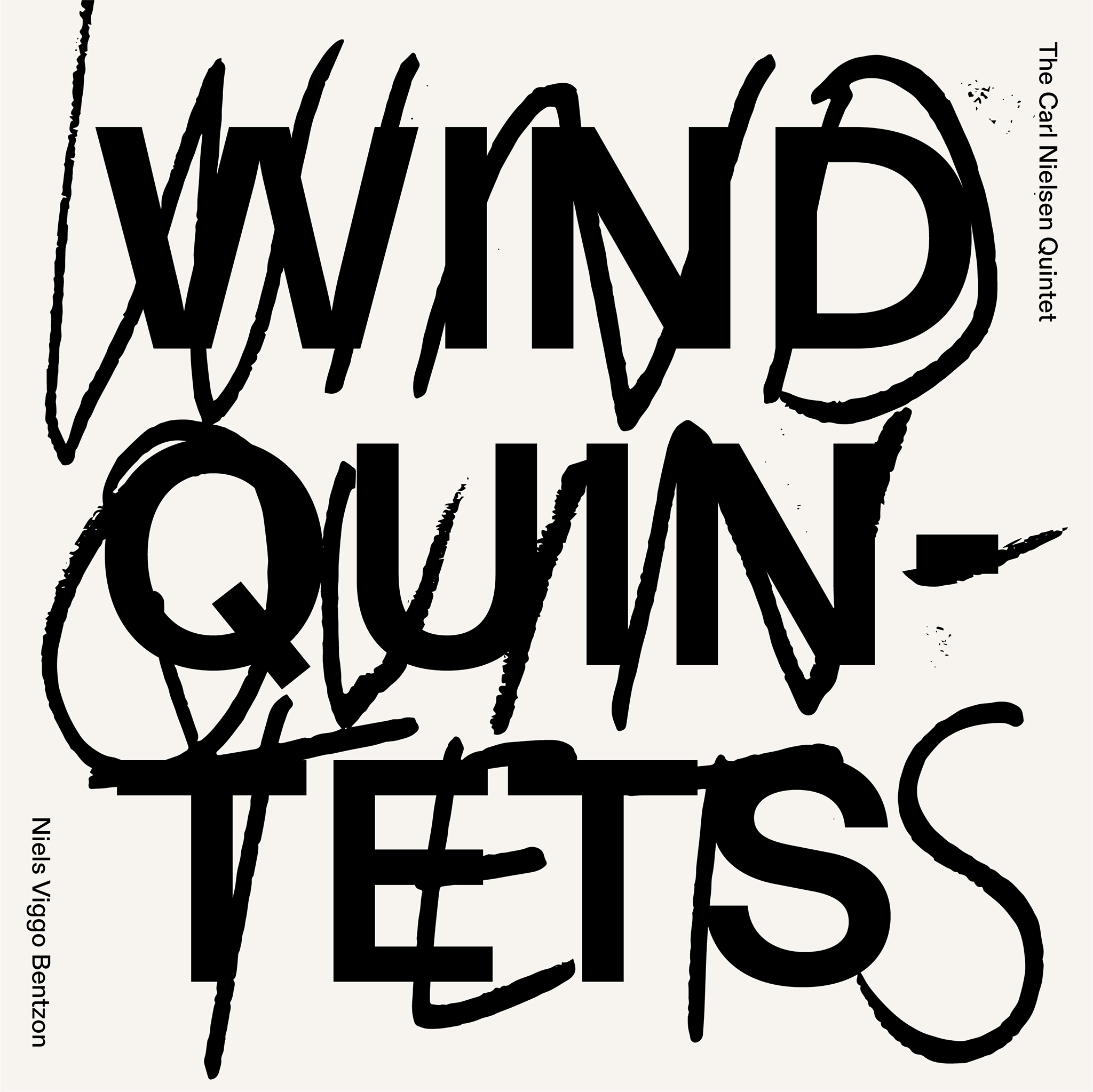 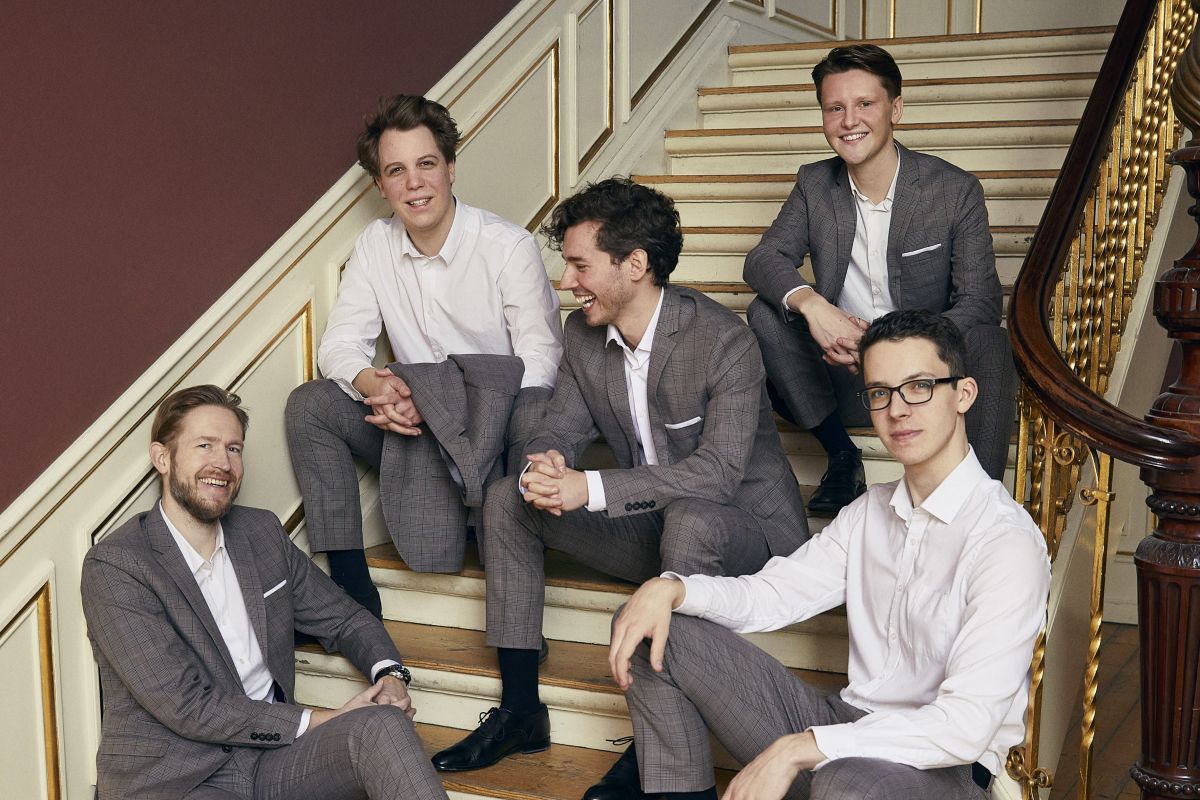 Carl Nielsen Kvintetten © Rasmus Kongsgaar
For "light" classic music, this is one intriguing and pleasing disc. You really need to hear it
Lynn René Bayley, The Art Music Lounge
It's rude and bold simplicity
GregersDH, Gregers DH
The result is captivating, influenced by Bentzon's virtuoso language and ingenuity, and the five musicians play with beautiful timbre the whole way
Peter Dürrfeld, Kristeligt Dagblad
The fanciful ornamentation of the soloists, of admirable conciseness, the superb solos and the instrumental craftsmanship of the five musicians are a constant in these wonderful quintets of Bentzon
Marçal Borotau, Sonograma Magazine
The Carl Nielsen Quintet really brings this music to life with all its good humour and musical gestures
Geoff Pearce, Classical Music Daily
SELECT PREFERRED FORMAT TO DOWNLOAD SINGLE TRACKS.
Booklet

The composer and pianist Niels Viggo Bentzon holds his place in Danish music history for several reasons. As a pianist, he was highly praised in his youth, and the best of his many works for solo piano are recognized internationally, as having a quality which parallels that of similar works by, for example, Prokofiev.

Right from the outset, Bentzon had an unusual flair for orchestration in his compositions. He could, to use an expression of Carl Nielsen’s, ‘creep in amongst the instruments’ and bring out their potential from within. The young composer had no fear in tackling the greatest music forms, and produced an unceasing stream of symphonies, instrumental concertos, operas, ballets and chamber music for nearly all the settings you could imagine. Over the years he established a record with his list of works: he brought nearly 1,000 works into existence in his cellar studio!

Bentzon was descended from the Hartmann line on his mother’s side, from several generations of significant composers, as well as being blessed with the musicality and creativity of his father’s family. Bentzon’s cousin Jørgen Bentzon, 25 years older than the composer, was himself a concise composer who associated with Paul Hindemith, who was also an influence on Niels Viggo Bentzon. Another cousin was the flautist Johan Bentzon. This family kinship gave the young composer ample opportunity to produce a series of works centred on wind instruments. It is characteristic of Niels Viggo Bentzon’s compositions that they were most frequently the consequence of a commission, a planned event or made in close collaboration with an individual soloist, a chamber ensemble or a symphony orchestra.

To capture the special qualities of Niels Viggo Bentzon’s tonal language, one can begin with his own descriptions of how his teachers at the Royal Danish Academy of Music in Copenhagen mostly failed to influence his music. ‘They were all struck dumb by excitement about Carl Nielsen’, he said. ‘The subject ‘Composition’ did not exist at the academy. You had to do it on the sly’.

Bentzon quickly developed a considerable aptitude for analysis, while at the same time searching for, and throwing himself into, various stylistic directions. In his most unexpected activities, he was visible to a much larger circle than that of the fans of classical music, and his characteristic profile was a favourite subject for the newspapers’ cartoonists. He participated in Fluxus, happening, postmodernism. He loved to play with words, and found absurd titles for his works, for exampleGlarmesterattituder, Gummiopera, Psyko-biologisk suite or Trut, prut og trompeter. Bentzon was all-embracing, a figure in Denmark’s cultural life. No matter that he periodically shifted between serialism, neo-classicism or the neo-baroque and beyond to various forms of ‘New Simplicity’ and musical theatre, his personal signature always remained stronger than the isms he flirted with.

Niels Viggo Bentzon’s five known wind quintets were all composed in his early years. In an interview published in the daily paper Land og Folk (Country and People) in 1947, the young composer conducted a qualitative review of some of his works to date, and his early explorations of the wind quintet genre were given a poor assessment. One can now conclude that Bentzon’s series of wind quintets starts with ‘No. 3’. Perhaps the first two were simply discarded by the composer?

Variations, Op. 21 are based on a theme of Bentzon’s own, with a neutral opening that doesn’t tell us what to expect. It is music from the Second World War’s worst year, 1943, created at the same time as Bentzon’s First Symphony. Despite the composer’s own regularly expressed opinion, the variations show a clear development from Carl Nielsen, perhaps also from Finn Høffding, one of Bentzon’s teachers at the music academy. The variations explore a series of ‘moods’, where the five wind players in turn are challenged in terms of virtuosity (as in variations 8 and 9) while also being asked to ‘show off’ various faces and grimaces. Variation 10 consists of no more than a single, long five note trill! The following Stravinsky-like choral Moderato e sotto voce bears a weird, Britten-inspired, citation by Bentzon: ‘muffled like winds under water’. The Variations were performed at the ISCM Festival in Amsterdam 1948.

Bop Quintet was written in 1952, at a time when Bentzon was also working on a group of other distinctive works, including his piano quartet Træsnit, Op. 65 (Wood-cuts) and the orchestral work Variazioni breve, Op. 75. Since his teens, Bentzon had been interested in jazz and in jazz greats such as Earl Hines, Duke Ellington and Thelonius Monk. It was his firm belief that Ellington was the twentieth century’s greatest composer! Niels Viggo Bentzon has told the author of this article that in his childhood he played his 78rpm jazz records with his fingernail to avoid disturbing his family! But even if he could always sustain a boogie-woogie on the piano, the jazz in his musical language always retained the character of a cliché, a stylistic mask. The two fine ‘bop’ movements can be related to another source of inspiration for Bentzon: Stravinsky, for example in his Ragtime and The Soldier’s Tale.

Wind Quintet No. 3 (1944) was written at the same time as Bentzon’s main work for piano, Passacaglia. The third quintet’s first movement is bound together by a little motive which then persists, like a red thread, through the whole work. There is no denying the presence of an inspiration from Carl Nielsen, but after the introduction, Bentzon finds his own unmistakable tonal language, in which dissonances and combinations interact with a little motive that unfolds expressively, holding everything together in a taut form. The second movement, Scherzino, is short and lively, interrupted by a trio section before returning to the beginning. A horn solo introduces the quintet’s finale, and a little duet for flute and oboe grasps the movement’s thematic material. The main section of the finale arrives in the best French style with a sparkling flute. Bentzon later claimed that the French music which inspired him was rather limited in scope. But here in the finale, we can hear inspiration from both Jacques Ibert and Darius Milhaud.

Wind Quintet No. 4 (1949) was, like No. 3, written for the wind quintet ‘Blæserkvintetten af 1932’ formed by winds of the Danish National Symphony Orchestra, including the composer’s cousin, Johan Bentzon, and the orchestra’s principal oboist, Waldemar Wolsing. This powerful oboist, also the chairman of the orchestra, was tremendously important to Bentzon’s music over many years. Wolsing was, too, a determined supporter of Bentzon’s symphonic works. The quintet was written at the same time as important works like the fourth symphony, Metamorfoser (1948) and the fifth, Ellipser (1950). It is written in a single great integrated form in which large plates of sound are interrupted by solo arabesques for the individual instruments. The form is virtually symphonic and rhapsodic; Bentzon never allowed his ungovernable fantasies to be halted by settled schemes or motivic relationships. He closes the movement in pure C Major.

Wind Quintet No. 5 (1958) was written for the Ernst Hye-Knudsen Quintet, formed by principal winds of the Danish National Symphony Orchestra, including the principal flautist Ernst Hye-Knudsen who gave his name to the quintet. The work begins with a Molto moderato, followed by an elegant and energetic Con moto. The third movement, Sostenuto, introduces a neo-baroque twist which gives way to a cadenza for the bassoon. The movement is beautifully crafted and at the same time intimate in its atmosphere. Bentzon asks the oboe to take up the cor anglais for the closing rondo-allegro, something which also happens in the wind quintet by Carl Nielsen. It is a mercurial and attractive finale.