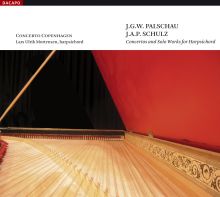 As the name suggests, Johann Gottfried Wilhelm Palschau’s ancestors were not from the actual kingdom of Denmark. His father, Peter Jakob Palschau (c. 1708-1793), was from the Duchy of Holstein and thus had a connection with Denmark. He travelled to the Danish capital Copenhagen in 1747 and joined the precursor of the present Royal Danish Orchestra, the so-called Hofvioloner (Court Violins), as a violinist and violist. At first he was an expectant, that is a kind of unpaid volunteer in the orchestra – he was only given paid employment after a long period of waiting in 1761. On the other hand he then appeared on the payroll until he retired in 1786 with a full pension, and by then he does not seem to have been active since 1771. Peter Jakob became a widower at an early age, although before this he fathered five children, all musically talented. For example two of the Palschau daughters were singing soloists in 1766 in the court conductor Johann Adolph Scheibe’s music for King Frederik V’s funeral.

In the latest edition of Grove’s large, universally acknowledged music encyclopedia we can read that his son Johann Gottfried Wilhelm was born in Copenhagen, and that 21st December 1741 was registered as the date of his birth or perhaps rather of his baptism. The date is probably more accurate than the place, considering that his father is said to be newly-arrived in the Danish capital in 1747, and we find no trace of the baptism in the Copenhagen parish registers of the time. However this may be, the son showed an early talent for music and his father seems to have seen the possibility of a career for him as a travelling child prodigy; but at the same time he was hampered by having to take care of four other children and a not-toowell-paid job in Copenhagen. In 1756 he took the unusual step of complaining directly to the King over still not having become a paid Court Violinist, since – as he wrote – he did not know where he could find the money to advance the career of his son “with the gifts granted to him by God”.

By then the young harpsichord virtuoso had long since played at the Danish court, and in 1754 even in London, where as chance would have it he lodged in the very house in which Leopold Mozart and his virtuoso son were to live ten years later when it was their turn to conquer the English capital. Then there appears to have been some years of travelling of which we only have scattered glimpses. In 1761 he gave a concert in Hamburg, and the next year one in Lübeck. Around this time two harpsichord sonatas also appeared in Nürnberg – the earliest Palschau works we know of. In 1768 he was back in Copenhagen and around 1771 we find him in Riga, where he has gone to see Johann Gottfried Müthel (1728-1788), who after studies with the great Johann Sebastian Bach had connections both with Bach’s son Carl Philipp Emanuel and with Telemann, before he settled down in Riga as a composing harpsichordist and organist. Müthel’s music is characterized by the ‘sensitive’ style that Bach’s son cultivated, especially in his slow movements, but pushed further into the mannered style, perhaps because Müthel had a virtuoso gene that he also cultivated in his capacity as composer.

In 1777 Palschau settled down in the Russian capital Saint Petersburg, where he quickly gained a foothold at the court and at the same time participated in public concert life. He both gave concerts where he himself was the centre of attention, and appeared with visiting virtuosi, wind as well as string players, just as he himself gave guest performances in Moscow. The Russian element also crept into his music. Among his relatively few extant works we find to harpsichord concertos and several sets of harpsichord variations on Russian folk tunes. His last documented performance took place in 1800, when the German singer H.C. Wunder advertised in the Gazette de Saint-Pétersbourg, saying that he had secured the participation of the famous piano virtuoso Herr Palschau. The harpsichord had now become a pianoforte, for such was the course of development. Whether Palschau had been able to adapt his technique to the requirements of the new instrument we unfortunately do not know. We are in some doubt even about his passing: some sources claim he died in 1813, others that it happened in 1815; but at any rate it was in Saint Petersburg.