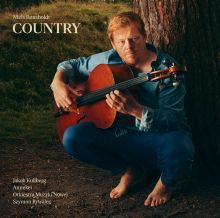 The cellist Jakob Kullberg is one of the most multitalented and respected Danish instrumentalists known for his highly personal and fearless interpretations – a musical persona on today’s international music scene transcending the established notion of ‘the classical cellist’.

He is praised internationally for his performances of contemporary cello concertos and recognised for his prolific and engaging performances as a soloist. He also appears regularly with some of the world’s high-profile orchestras, including the Royal Philharmonic Orchestra, London, the BBC Philharmonic, the Bergen Philharmonic Orchestra, Sinfonia Varsovia, Tallinn Chamber Orchestra, among others, as well as the Danish, Swedish, Norwegian and Finnish symphony orchestras and sinfoniettas. He is also a regular guest at festivals such as the Aldeburgh Festival, Bergen International Festival, Huddersfield Festival and Warsaw Autumn Festival.

Jakob Kullberg is a prizewinner at international solo and chamber music competitions and has a discography which to date has earned him P2 Prisen – ‘the Danish Grammy’ – twice, as well as a shortlisting for a Gramophone Award. His large scale collaboration with the BBC Philharmonic and conductor John Storgårds has so far resulted in the album Remembering released on BIS Records.

Jakob Kullberg enjoys a uniquely close collaboration with the composer Per Nørgård, whose entire cello-output of the last 20 years has been composed specifically for him. He is also a notable interpreter and collaborator of Kaija Saariaho and Bent Sørensen.

Artistic Director of Århus Sinfonietta, he has led the Open Strings Cello Masterclass since 2004 and regularly gives masterclasses at major institutions in Europe, the USA and China. Professor of Cello at the Royal College of Music, London, he is also an Associate of the Royal Academy of Music.