The Danish String Quartet
Carl Nielsen took Danish music into the 20th century, and his chamber music has a prominent position in the international repertoire. In spite of this Carl Nielsen only composed a limited number of chamber works for strings. This CD features two of his string quartets (in G minor and G major) and the only string quintet (in G major) he ever composed. All three works played a central role in Carl Nielsen's musical career, since they were major successes for the debuting composer and contributed to his initial breakthrough.
Buy album Stream
Download 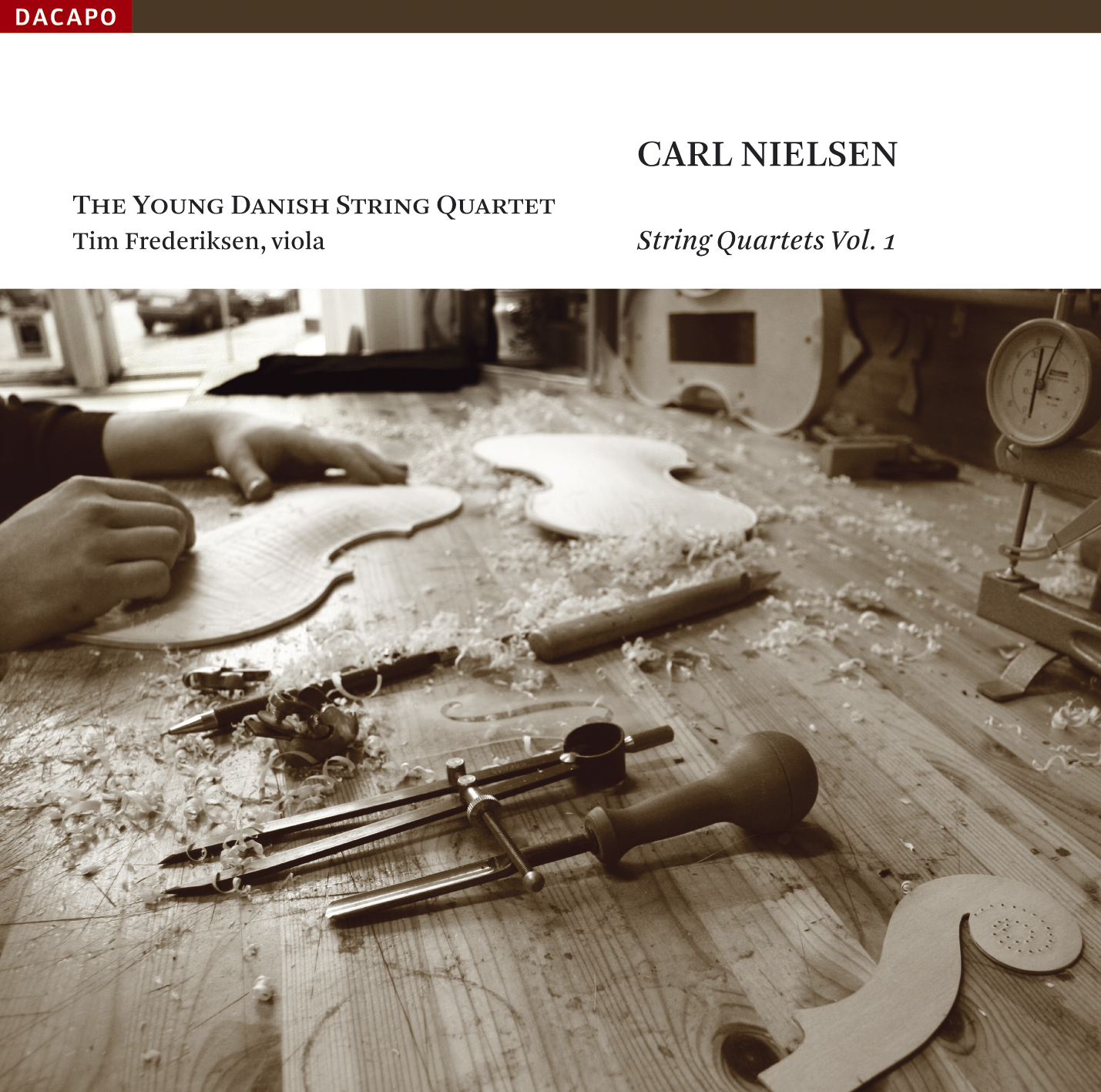 Would we have wished it otherwise? Well, yes, it would have been exciting if Carl Nielsen (1865-1931) had composed another string quartet at the mature age when he created masterpieces like the Wind Quintet (1922). But we are not poorly served either with the four string quartets that are in his official worklist, complete with opus number etc., three of which were composed a far back as pre-1900.

While today it is hard to draw any great distinctions among these four Nielsen quartets in terms of popularity, it was a different matter in his own time, when the earliest, the G minor quartet, was by far the least frequently performed, while the next one, in F minor, and the last, in F major, vied for a definitive first place, probably because they both belonged to the regular repertoire of well established ensembles like the -Breuning-Bache Quartet and the Thorvald Nielsen Quartet. Both these ensembles also took them with them abroad.

The G minor quartet was not published until 1900, and therefore bears the opus number 3, although it was written before opus 1 Suite for Strings. It was one of the two great private Copenhagen chamber music societies of the day, Privat Kammermusikforening, that gave the work its musical christening. This was on 26th March 1889, and the quartet was to see at least a further four performances in the second of these societies, Kammermusikforeningen af 1868 and in the newly founded Vor Forening, before it was played for the first time in public at Nielsen's composition evening on 3rd February 1898 in the smaller hall of what was then known as Koncertpalæet, because it has not yet been taken over by the Order of Odd Fellows.

The work was the oldest in the all-Nielsen programme, and before this it had been subjected to a critical revision, perhaps prompted partly by an agreement with the music publisher Wilhelm Hansen to print it. The revision involved abridgements in the transitions between the various formal sections, not so much in the fundamentals of the structure, which remained the quite conventional one for the epoch, with a single exception: in the last movement, between the recapitulations of the first and second subject, Nielsen features a section entitled Resumé\\, where he contrapuntally combines thematic material from the first, third and fourth movements and thus underscores the unity of the work.

The reviews were mainly positive, perhaps especially in their comparisons with more recent works in the programme: \\Undoubtedly the most important, most beautiful and in all respects most appealing piece of music one heard at the concert, and finally, first and foremost, the most direct and wholesome. Unfortunately its genesis lies about a decade in the past\\ (Dannebrog).\\The ten-year-old quartet provided a breath of youth and freshness that did the heart good. There was a pace and power in this beginner's work that delighted the audience\\ (Vort Land).

On publication the quartet was furnished with a dedication to the composer Johan Svendsen (1840-1911), whom Nielsen admired greatly, and who in his capacity as principal conductor at the Royal Danish Theatre also did his bit to procure the best opportunities for the young orchestral musician Nielsen to see to his composing work alongside his duties as a musician at the Theatre.

Carl Nielsen's only string quintet was written in 1888, on the heels of the G minor string quartet. It was given its first performance at a concert on 13th February the next year in the society Kammermusikforeningen af 1868. The composer himself played -second violin, and did the same in the next performance on 28th April in the newly founded society Symphonia, which held its concerts in the Hornung & Møller concert hall.

On this particular early spring Sunday the 23-year-old violin-playing composer had in fact stretched himself almost to breaking-point. For at 4 p.m. he appeared in one of the so-called Folkekoncerter (Popular Concerts), where, along with his old academy classmate Julius Borup, he was the soloist in a concerto grosso by Händel, as well as conducting his own Suite for Strings, which had been performed for the first time late in the previous summer in the Tivoli Concert Hall. And then at 8 p.m. he had to take the stage in Symphonia, where the programme consisted exclusively of newly composed Danish music and - fortunately for him - was for mixed ensembles, such that at least he only had to appear in his own quintet.

Not only would it have pleased Nielsen that the two great names of Danish musical life then, Niels W. Gade and J.P.E. Hartmann, were both present; he also had reason to be satisfied when he read the Monday papers: \\As a whole, judging from a first performance, this work makes a beautiful impression with its appealing melodiousness, its rounded form and no ordinary inventiveness in harmonic respects\\ (Berlingske Tidende). \\An extra-ordinarily fresh and pleasing string quintet in G by the very young composer, Mr. Carl Nielsen, testified to a healthy, fertile talent for instrumental composition\\ (Politiken).

One might think that the new quintet would then gradually become established in the standard repertoire. But that simply did not happen - perhaps because it was overtaken and sidelined by new string quartets: the above-mentioned G minor quartet, already composed before the quintet, but given its first performance later than it, and an F minor quartet, written in 1890. In addition it was always a little more difficult to get a quintet performance together, even though Danish musical life before 1900 was typified more by ad hoc ensembles than by firmly established string quartet ensembles.

At all events the G major quintet was afterwards only played privately in Berlin during Nielsen's study trip in 1890 (where he himself called it ‘overloaded') and in Copenhagen a couple of times more in 1892 and once in 1911. Prior to the extensive festivities in connection with Nielsen's 60th birthday in 1925, the violinist Thorvald Nielsen asked about the possibility of a new quartet and was instead furnished with the more than 35-year-old quintet, which still only existed in manuscript form. There were a further couple of performances, after which Nielsen showed his gratitude by giving the work a dedication to the young man with the same surname as himself (to whom he was not related).

In 1905 Nielsen took his leave as a violinist at the Royal Danish Theatre. His violin-playing would never have reached the soloist standard, but friends described him as an amusing and characterful quartet first violinist, and he still occasionally engaged in quartet playing, especially in the company of the Dutch musicians of the Röntgen family, whom he met regularly at the estate Fuglsang in beautiful natural surroundings on the island of Lolland.

Nielsen's F major quartet was composed in Copenhagen in 1906, at a time when he was busy with the opera Maskarade. It has the same gaiety and grace as the opera, and - although written in a quite different musical idiom - it is clear evidence of Nielsen's profound admiration of Mozart. It was performed for the first time privately at a chamber music evening at Fuglsang on 10th August. To his good friend the pianist -Henrik Knudsen, Nielsen wrote the day before about the rehearsal work:

\\Today we have played my new quartet and it sounds as I had expected. After all I am now close to complete familiarity with the true nature of the bowed instruments. Incidentally it is strange how many years one must coax and caress such a delicate creature as a string quartet before she gives in. Only now do I think I have got more or less to grips with its coy, chaste character.\\

The first public performance took place on 30th November 1907 at a Nielsen composition evening in Copenhagen. At this time the quartet bore the opus number 19 and the by-name Piacevolezza (‘Delight'), which he was later to scrap. And perhaps this is just as well, for there is no eagerness to please in this highly modulated music. We are not meant to feel sure of very much: the first subject of the first movement is only nine bars long, but begins firmly in F major only to end just as firmly a semitone higher in G flat major. If that can happen, anything can happen!

And indeed the composer was rewarded with a lecture from Politiken's Charles Kjerulf: \\If what the four gentlemen on strings sat up there and played is seriously to be understood as good, beautiful music, then Messrs. Beethoven, Mozart, Schubert, Schumann and associates, including Wagner and Tchaikovsky - the whole gang, and our own too, with Hartmann and Gade at their head - have all been pulling the wool over our eyes, indeed indulging in false advertising. And in that case sciatica is also a musical pleasure. For that is very unpleasant too.\\

The slow movement of the work, \\Adagio con sentimento religioso\\, in fact clearly points forward, with its hymn-like introduction, to Nielsen's above-mentioned last great chamber music work, the Wind Quintet. In the quartet, though, there is no question of varying the hymn theme, rather of something that can be described as a gradual metamorphosis.

In a partly new shape, the F major quartet was played a few times in 1919 and then presumably further revised before Carl Nielsen finally succeeded in having his string quartet swan song published in 1923 by Edition Peters in Leipzig, now without a by-name and with the opus number 44.

This SACD has been recorded in cooperation with the Danish Broadcasting Cooperation.
Array ( )
randomness