Bent Sørensen’s quietly spoken universe incorporates loneliness, nostalgia and a feeling of loss and leave-taking. Of the works on this album, his triple concerto, L’Isola della Cittá (The Island in the City) (2015), has a purity that makes it one of the composer’s most immediate and gripping orchestral works. His dramatic Second Symphony (2019) dives into the resonance of music’s classical history, where every sound is considered with the greatest care and refinement. 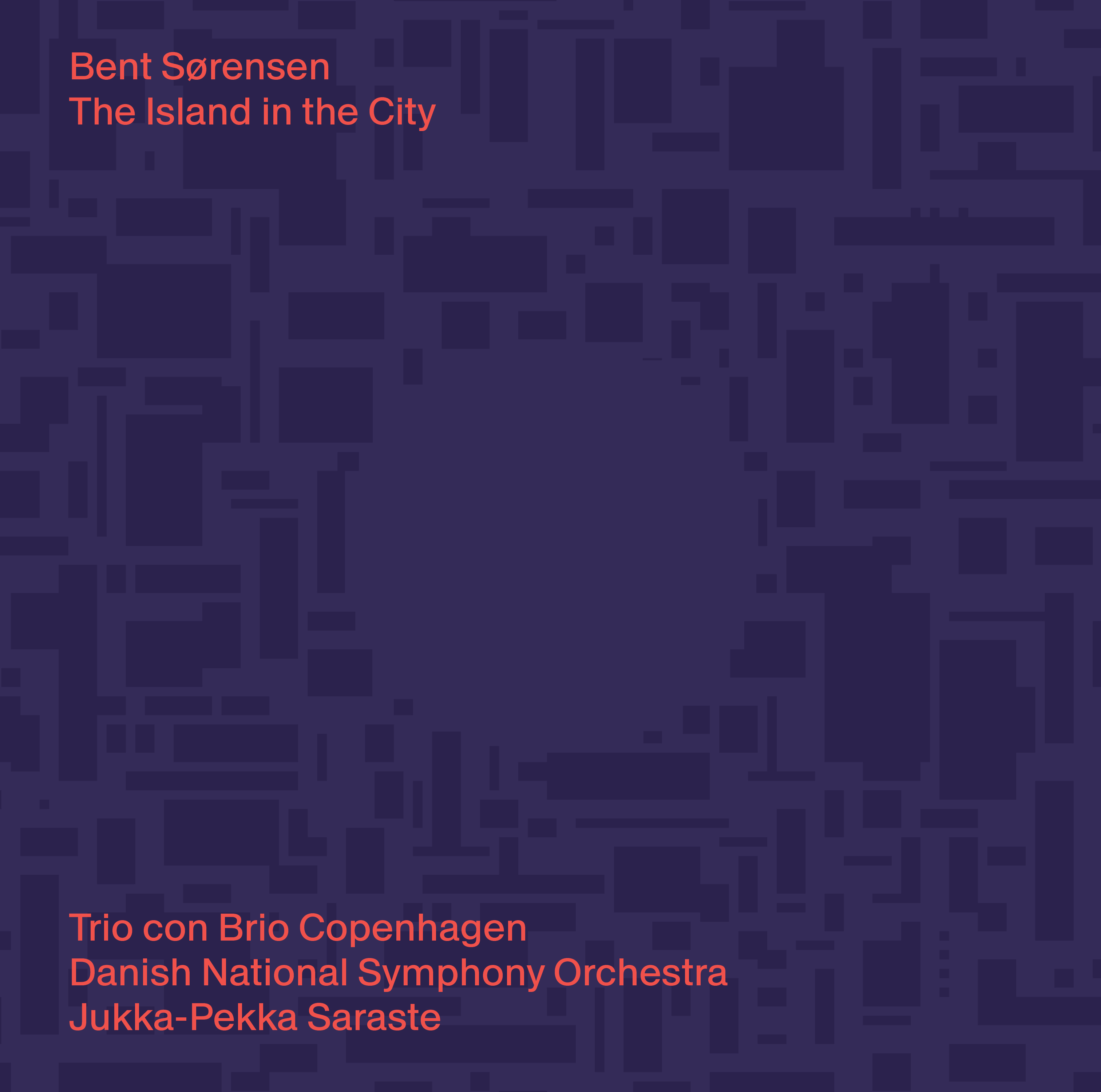 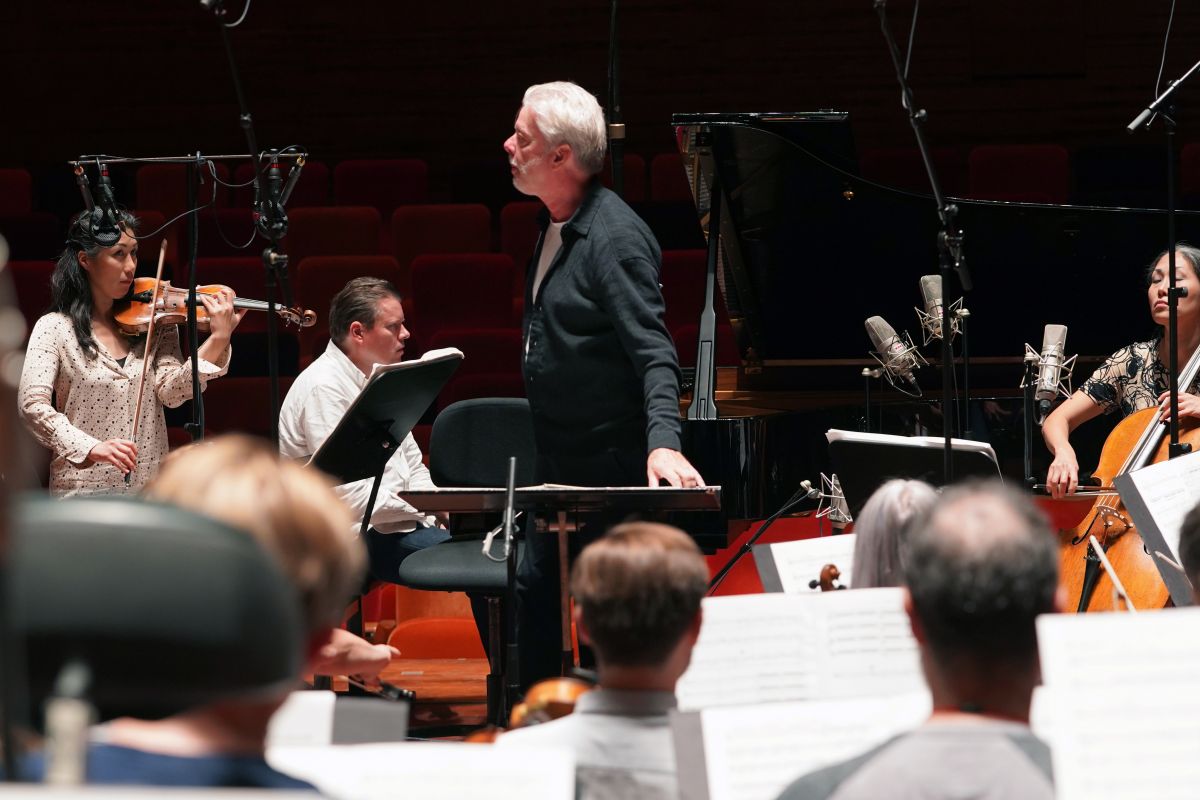 Turn off the microphone when you perform – it will make the audience listen more attentively.’ This was the advice which Bent Sørensen received from an older colleague when, as a young musician, he played folk music on guitar. And in his masterful compositions from the 1980s until today, Sørensen has shown that he took that advice to heart. Every sound in his music has been considered with the greatest care and refinement. ’If silence must be spoiled, it must be done well’, says Bent Sørensen himself, ’for what is better than silence?’

Bent Sørensen’s silence is rarely idyllic. His quietly spoken universe incorporates loneliness, nostalgia and a feeling of loss and leave-taking. The lost time also includes music’s classical heritage as an undertow in his modernist language. A lonely G minor triad in L’Isola della Città is so isolated that it cuts to the heart, while melodic triad-inversions are as calming as memories from the cradle in a distant past. He expresses the distance with great technical dexterity and in innumerable nuances, with a sorrowful realization that while the past fades away, we are moving forward the whole time at the same speed, steadily becoming no more than a memory ourselves. This creates a raw presence in Bent Sørensen’s silent universe.

L’Isola della Città (2014–2015)
’When I wrote L’Isola della Città, I lived in the centre of Copenhagen, in an apartment which was the only one in the street to have a balcony, and when I went out onto the balcony it was like standing on an island’, says Bent Sørensen. ’The noise and racket from the street formed a counterpoint to my own situation, especially at night. And perhaps, too, this music unfolds at night, as most of my music does, because it was written at night’.

Sørensen, standing on the balcony, is ’the island in the city’, L’Isola della Città.

’I don’t know why the title is in Italian’, he adds. ’A part of my artistic psychology is that I can only write a piece if it has a title. It gives me a kind of verbal tag and makes the music a little less abstract to work with.’

The work’s combination of piano trio with symphony orchestra has an obvious historical model in Beethoven’s Triple Concerto (1803). This can be seen at play in Sørensen’s work, though not in terms of the basic forms or their role in the music. In Sørensen’s piece the movements are joined together to form a whole, and the three soloists are integrated too: ’My triple concerto is not a concerto for three soloists, but for a single soloist, which happens to be a piano trio. The trio forms an island around which the orchestra moves to and fro. The piano trio remains separate, even when something really violent is happening around it’.

It is clear from the start that it is not a concerto in which three soloists are competing with each other for attention, or with the orchestra for power. These roles are in play from the first bar, where it is not the trio’s solo strings but the solo violinist and cellist from the orchestra who initiate the passage. Thereafter the trio’s two string players glide in, like a shadow in the music, so that it’s difficult to discern who is playing what.

The trio’s pianist enters during the transition to the weighty second movement, beginning a four-voiced fugue of the purest clarity. It is Beethoven’s Piano Sonata op. 110 which runs in the background here, both in the choice of a fugue (a rare occurrence in Sørensen’s works) and in the threatening wall of sound which can be heard just before it commences.

It is only clear when it is nearly too late that the orchestra’s support for the pianist slowly becomes overwhelming. The two solo strings respond with a lament, in which their voices are woven together in a duet. A new wave floods over them, this time dominated by muted brass which sneakily infiltrate the trio with their strength.

The movement’s symmetry is generated from a repetition of the fugue which opened the movement, this time in inversion. At this point the two solo strings are in harness: the loneliness is transformed into a paradoxical ’isolation in company’, which ends as the next wave washes over the trio. The movement ends with a short, lamenting solo cadenza for the cello.

The third movement is an unusual intermezzo, characterized by a high level of bright colours and soft nuances. It seems as though the pulse falters when a simple melody emerges from the still air, establishing itself as a canon, which is divided between the trio, the orchestra’s strings and its two clarinets. Sørensen characterizes the theme as ’a chorale that whispers’, and in a fleeting moment of fragile co-existence, for a moment everyone is united in their shared purpose. The volume is pianississimo, and the piano’s tremolando makes the delicacy even more affecting. The movement ends with a solo, this time for the trio’s violinist, who sets up the rapid fourth movement with a scherzando cadenza.

The fourth movement is brief and possesses a compressed toccata-like energy which, unusually for Bent Sørensen’s music, is driven forward by striking rhythms and abrupt disjunctions. The music’s lines stay tightly together in a very compact sequence, condensing the trio’s interactivity to a suppressed kernel. The movement is rounded off by the work’s third solo cadenza, this time on the piano.

The fifth movement bears the marking ’Lamentoso’, and provides a moving closure and farewell. The lullaby from the first movement returns as a core memory for the trio. Beethoven returns too, this time with the idea from the second movement of his Piano Concerto no. 4, where the soloist remains unaffected by the threatening surroundings and continues their quiet existence. ’This is David against Goliath, and here the idea of “an island in the city” is clearest’, says Bent Sørensen. ’You hear a piano trio facing the orchestra alone, forming an enormous shape which tries to overwhelm the soloists. But the trio has found itself and can play the same chord over and over again without giving the orchestra a thought. The trio is released and the piece ends.’

L’Isola della Città has a purity that makes it one of Sørensen’s most immediate and gripping orchestral works. It was written for Trio con Brio Copenhagen, who had given the first performance of Sørensen’s piano trio Phantasmagoria in 2007. Bent Sørensen prefers to compose his pieces for musicians he knows, and Trio con Brio Copenhagen’s incredibly close interplay is a part of the character of L’Isola della Città. The trio’s two string players are sisters while the cellist is married to the pianist. After 25 years playing together, they have created such a strong bond that the trio can be said to have just one voice; together they perform as one soloist.

Though the word ’symphony’ has been used in countless ways at different times, Bent Sørensen’s Second Symphony, with its five movements and an archetypical formal structure, is a ’classic’ symphony. The work dives into the resonance of music’s history: the imagination showers itself in melodies, sounds and structures while at the same time, from a rational perspective, it can be seen both from outside and from a distance. This doubled point of view is directly embodied in the work’s title: Sørensen’s first symphony had been called Symphony and the Second Symphony’s title also contains several layers of meaning. It can be understood as ’the symphony which follows’, ’a subordinate symphony’ or perhaps just ’another symphony’. There is, too, a double meaning in ’second’: it means both an interval in time and the interval between two adjacent notes.

’Titles are a part of my dreams – dreams that become music’, explains Bent Sørensen. ’For many quite inexplicable reasons, it is important for me not just to number symphonies and thereby mark their genre, and the name Second Symphony is both a title and a part of a dream.’

It is not part of Bent Sørensen’s temperament to begin his works with a bang, but he comes very close to doing that in Second Symphony. The first movement starts like a scream in slow motion, one which creates echoes that run through the whole movement. In this episodically composed movement, time after time new passages of symphonic energy from the introduction emerge while a quiet solo violin pulls in the opposite direction, towards the past, dreams and partings.

The symphony’s slow second movement is, in Sørensen’s own words, ’rather melodic’. ’My way of grasping structure is closely bound up with melody’, says Sørensen. ’When I was younger, it was something I was afraid of – you can become frightened of things you’re good at. But over the years I’ve become more comfortable with telling my stories with melodies.’ In this second movement, the melody steps forward like a reminiscence, a bleached family portrait on the wall, and again it’s a solo violin that’s looking back. ’A good melody has its own memories’, explains Sørensen.

The third movement is a scherzo which Bent Sørensen describes as ’teeming, rhythmic, an almost physical encounter – gentle and intense – as though the different layers of the music were making love.’ The movement ends with an undisguised spurt before an abrupt clash. And so the symphony ends, like L’Isola della Città, with a ’song of farewell’, a rounding off, but here more definitive than in the triple concerto. Bent Sørensen compares the symphony’s final movement with ’a musical ship that comes close by, only to disappear’. The ship is laden with memories, and finally disappears over the horizon when the solo violin plays a fragmentary reminiscence of a phrase from the old mediaeval psalm, ’Giv mig, Gud, en salmetunge’ (Give me, God, a tongue for singing psalms).

’I see myself as being, to a high degree, an autobiographical composer. My life and my music are woven together’, says Bent Sørensen. ’In the last movement of the symphony there is a glimpse of a past – my past. It is a quotation from my fourth string quartet, Schreie und Melancholie, and I recognize that I was influenced by the fact that my mother passed away while I was working on the symphony. That may be the “farewell” which I have written in notes.’