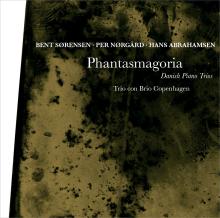 There are times when two plus two can equal three. Trio con Brio Copenhagen is one such instance, where family ties, cultural blending, and musical connections all converge to color, shape and energize the concerts they present worldwide. Korean sisters Soo-Jin and Soo-Kyung Hong and Danish pianist Jens Elvekjaer created the Trio in Vienna in 1999 with the concept of pairs coming together. The sisters had played together since childhood, and Jens Elvekjaer and Soo-Kyung Hong (who are now married) had played piano and cello duos together for years. According to Mr. Elvekjaer, "We have always felt that this ‘two and two equals three' dynamic provides a uniqueness and intensity to all of our performances.

"The strong personal bonds among the three of us greatly affect the way we conceive music together. We can be one hundred percent honest with each other in rehearsal and performance, and our different cultural backgrounds have provided an unusual perspective that shapes all that we do. It is a process of thinking without boundaries, cultural or otherwise, while staying within the great traditions that the music needs."

This high quality has been recognized not only by audiences and critics, but by some of the most important and renowned musicians of our time. In 2005, Trio con Brio Copenhagen was the recipient of the Kalichstein-Laredo-Robinson International Trio Award, one of the most coveted in the world of chamber music. This biennial award, with a panel of prominent musicians as judges, carried with it appearances on twenty major concert series across the United States, including at New York City's Carnegie Hall, thereby introducing an extraordinarily accomplished "rising" piano trio to American audiences.

The Trio was praised from the time of its inception. About the Trio's debut CD, the American Record Guide wrote: "One of the greatest performances of chamber music I've ever encountered...What stands out from this ensemble is the range of tone and sound...They command an amazing range of timbres. Melodies sing with an aching sweetness, or seduce with wild eroticism, or haunt with impenetrable mystery." Gramophone magazine wrote: "It's easy to see what so impressed the judges...[the] performances can compete with the best available...airtight ensemble...a superb, greatly gifted chamber group."

The Trio first commanded international attention with a performance that took the highest prize at Germany's prestigious ARD-Munich Competition in 2002. Since then, it has won First Prize in additional competitions: Italy's Premio Vittorio Gui (Florence), Norway's Trondheim Chamber Music Competition, and the Danish Radio Competition. The ensemble also won the "Allianz Prize" for Best Ensemble in Germany's Festspiele Mecklenburg-Vorpommern, Second Prize in the Vienna Haydn Competition, and the Premio Trio di Trieste in Italy. Critics have praised the Trio for its "sparkling joie de vivre" and "magic dialogue"; a review of its performance at the Salzburg Mozarteum stated, "They cast a spell over their audience...so alive, so musical...ravishing."

The members of the Trio say that they create their programs to include "the core well-known repertoire as well as contemporary compositions from Scandinavia. We often commission pieces so that our repertoire is dynamic and constantly changing. Our performances and interpretations benefit from a constant curiosity about repertoire as well as new ‘angles' - cohesive themes - in programming. This opens new perspectives for both the players and the audience. Ideally, a program should provide an enriching and exciting journey for listeners, with contrasts, moods and colors. For example, one really listens to Beethoven differently after having been immersed in the sound world of Hans Abrahamsen's pieces. With truly ideal programming, even we are occasionally surprised!"

Trio con Brio Copenhagen performed all the Beethoven piano trios in a cycle of three concerts at the Tivoli Concert Hall in Copenhagen with great success. The Trio was Ensemble in Residence in Copenhagen's Rundetaarn (Round Tower), with five sold-out concerts in 2005; these performances were also heard on the European Broadcasting Union and Danish Radio. The Trio has also been heard on the BBC, Korean Broadcasting Systems, Norwegian Radio, Swedish Radio, Radiotelevisione Italiana, and on the major German networks (ARD, NDR, Hessischer Rundfunk and Radio Berlin). Trio con Brio Copenhagen is frequently featured as soloists in Beethoven's Triple Concerto with orchestras.

All three musicians are interesting, vital people whose personalities play off one another offstage as they do onstage. Good food and wines figure prominently in all three musicians' lives, as do the joys of traveling - a very good thing since it is compulsory in their careers as busy musicians.

The Trio's sound benefits from the superb instruments all three play: Soo-Jin plays a violin built by Andrea Guarneri from the 17th century, Soo-Kyung plays a Testore cello from 1731, and Jens is the first Steinway Artist from Denmark.