The special chemistry between the Swedish conductor Herbert Blomstedt and the Danish National Symphony Orchestra stems from one of the most outstanding  artistic partnerships in the music life of Scandinavia. Blomstedt was the very first chief conductor of the Danish orchestra and is today its honorary conductor – and the partnership is now in its seventh decade! This DVD celebrates Herbert Blomstedt’s profound insight into the symphonic worlds of Franz Schubert and Anton Bruckner, unfolding in Denmark’s historic Roskilde Cathedral. Blomstedt’s dream of conducting in this dazzling acoustic came true at a memorable concert in 2007, now made available for fans of the Swedish conductor and his Danish orchestra to enjoy worldwide. This DVD is released to celebrate Herbert Blomstedt’s reception of the prestigious Léonie Sonning Music Prize 2016. Included is also a rare 80-minute interview with Blomstedt. 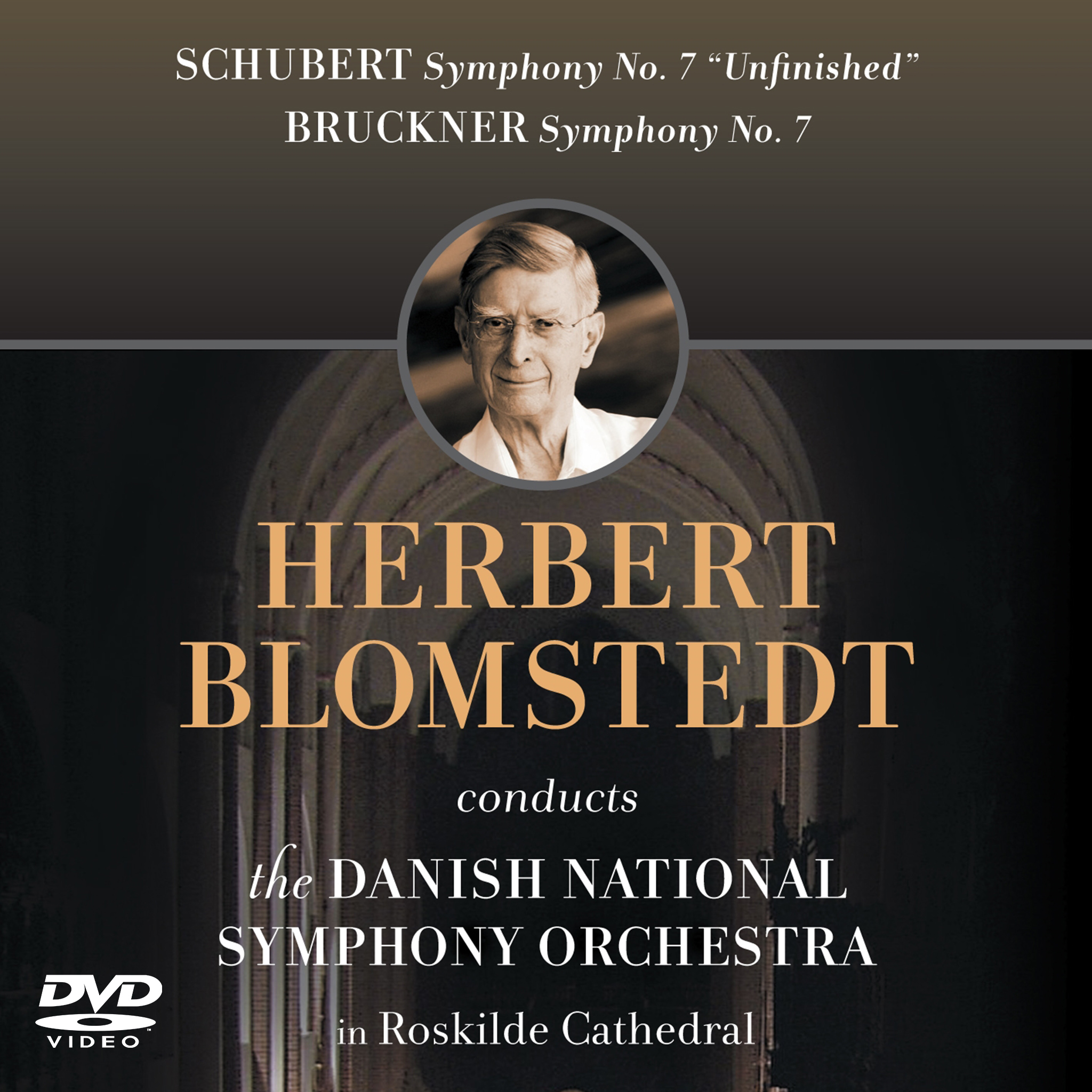 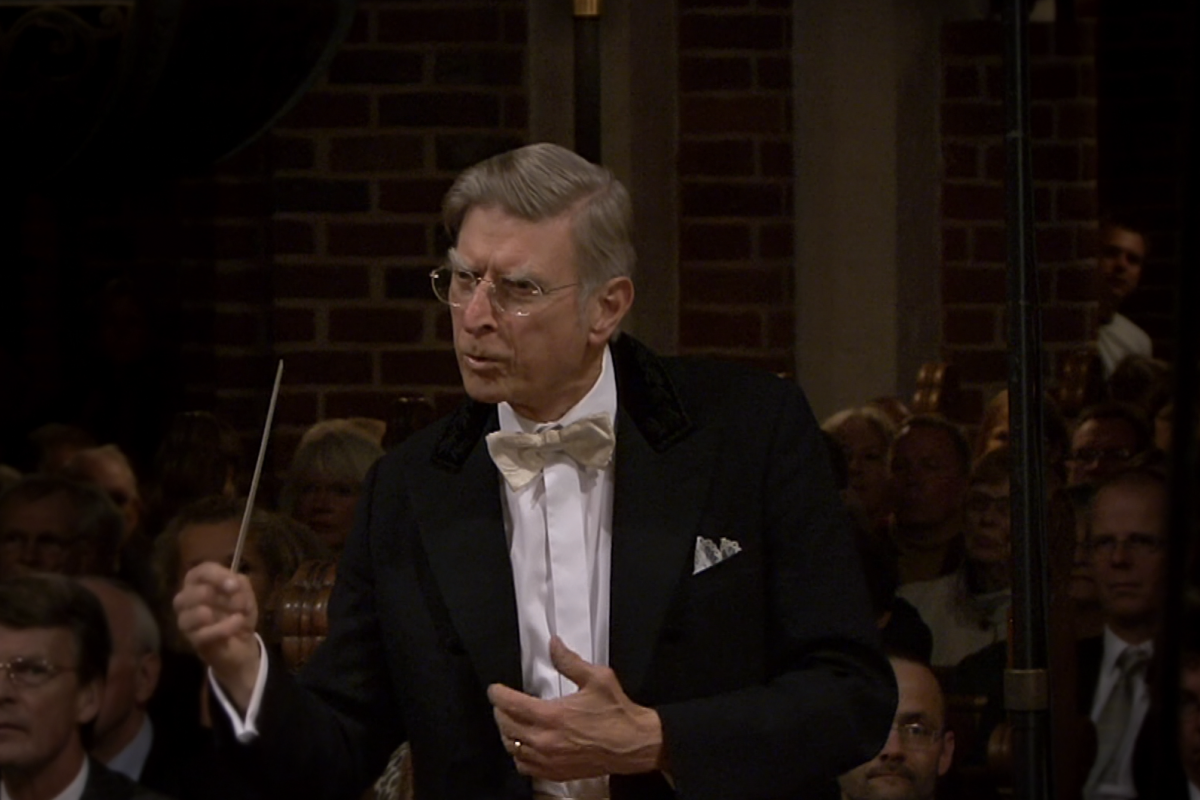 "...en sprudlende introduktion til det at høre stor musik. De 80 minutter flyver afsted."
John Christiansen, jcklassisk
[..] "Zunächst hört man eine groß-symphonisch angelegte, opulent und gefühlvoll gestaltete ‘Unvollendete’ von Schubert, die durch die den Kirchenhall noch mächtiger wirkt." [..]
Remy Franck, Pizzicato
"The performance [..] is on a broad scale, with a vast dynamic range, and in the slow movement much exquisite rubato for the exquisite wind solos."
Michael Tanner, BBC Music Magazine
“If listeners are to truly sense Bruckner’s intimacy the conductor must avoid a First Movement that is too slow and solemn. Blomstedt avoids this. That is, among other things, what makes his interpretation so rich and poignant”
Tobias Lund, Sydsvenskan

(Spoken in Swedish and Danish with subtitles in English, German and Danish)

It is a quite unique collaboration in the Nordic musical world: the link between the ­Swedish conductor Herbert Blomstedt and the Danish National Symphony Orchestra in Copenhagen. Blomstedt was the orchestra’s first chief conductor and is today its honorary conductor. The collaboration is now entering its seventh decade!

Herbert Blomstedt was born in 1927 in Springfield, Massachusetts, to a Swedish emigrant family who moved back to Sweden when he was two years old. He grew up in Stockholm and embarked on an extraordinarily comprehensive education as a music teacher, organist and precentor, violinist, conductor and musicologist. In 1952-54 he travelled abroad and studied conducting with Igor Markevitch in Salzburg and Leonard Bernstein in the USA.

The first time Herbert Blomstedt encountered the Danish National Symphony ­Orchestra was when he worked on a radio recording in 1955, and in 1956 he conducted his first concert with the orchestra. At that time he was chief conductor of the Norr­köping Symphony Orchestra.

In 1962 he became chief conductor of the Oslo Philharmonic. Five years later Blomstedt was engaged as chief conductor at the DNSO. That was the first time the orchestra formally had a chief conductor. Until then it had managed with a core of regular names, but now Blomstedt took over personal responsibility not only for a large part of the season’s concerts, but also for the artistic leadership of the orches­tra’s development.

The DNSO is one of the world’s oldest radio orchestras, founded in 1925. When Blomstedt took up his appointment the orchestra could look back on a prime in the 1930s under the batons of legends like Fritz Busch and Nicolai Malko, who had ­carried the tradition forward in the post-war years. But at the beginning of the 1960s the DNSO was in artistic crisis. The regular Danish conductors Thomas Jensen, Launy Grøndahl and Erik Tuxen were no longer around and the musicians faced a gene­rational change. There were acoustic problems in the DR Concert Hall, and a policy involving a wish for the orchestra to play more contemporary music created divi­sions. Technically and musically the orchestra had begun to come apart at the seams. Now Blomstedt was to be responsible for its regeneration.

His period of leadership lasted from 1967 until 1977, and in the course of that ­decade he raised the standard of the orchestra to new heights. Quickly respect grew up around the rather young chief conductor who was at first regarded as “very ­Swedish” – which in the eyes of his Scandinavian sister country referred to his per­sis­­tent daily efforts, which were patient, extremely well prepared, analytical and detailed.

For the first few seasons he worked his way through the Vienna-Classical repertoire to remedy the omissions. He also opened the gates to the music – neglected in Denmark – of Mahler and Bruckner, and he quite naturally made room for modern music, especially by Danish and Swedish composers. Among the many first performances for which Blomstedt was responsible were works by Danes such as Vagn Holm­boe, Axel Borup-Jørgensen, Per Nørgård, Ib Nørholm and Pelle Gudmund­sen-Holm­­green. He also made the first complete Danish recording of Carl Nielsen’s symphonies and concertos.

Later Blomstedt became chief conductor of ensembles as outstanding as the San Francisco Symphony Orchestra, the NDR Symphony Orchestra and the Gewand­­haus Orchestra in Leipzig. Common to all his orchestras is the way they speak today of their glorious “Blomstedt era”. Not least in Copenhagen, where the orchestra has undiminished memories of the years that were crucial to its standard and profile.

For a period it was difficult to keep up the contact between the Danish National Symphony Orchestra and Herbert Blomstedt because of his global career, but since the ­middle of the 1990s he has again given annual concerts in Copenhagen, and they are always among the absolute high points of the season.

For his services he has been appointed a Knight of the Order of the Danne­brog, and he has been awarded the Carl Nielsen Prize.

In 2016 he is to be honoured for his huge artistic contribution with Denmark’s greatest musical distinction, the Léonie Sonning Music Prize, which has earlier been awarded to among others Igor Stravinsky, Dmitry Shostakovich and Leonard Bern­stein. At the Award Concert Herbert Blomstedt will conduct his ‘old’ Danish orches­tra, with whom he has connections going longer back than any other.

The score for Bruckner Symphony No. 7 used on this recording is published by Musikwissenschaftlicher Verlag Vienna, represented by Alkor-Edition, Kassel

Thanks to the following for their commitment in realizing this project: