Ole Schmidt is best known as a conductor, but since his debut in 1955 he has written a number of brilliant musical works. His music has strength and vitality, and clearly has its wellsprings in a fertile imagination. Ole Schmidt's musical roots are within Neo-Classicism, but also in the playful freedom of jazz. His comprehensive production embraces a great variety of musical genres, and this collection of string quartets allows us to see the full spectrum of his compositional gifts.
\ 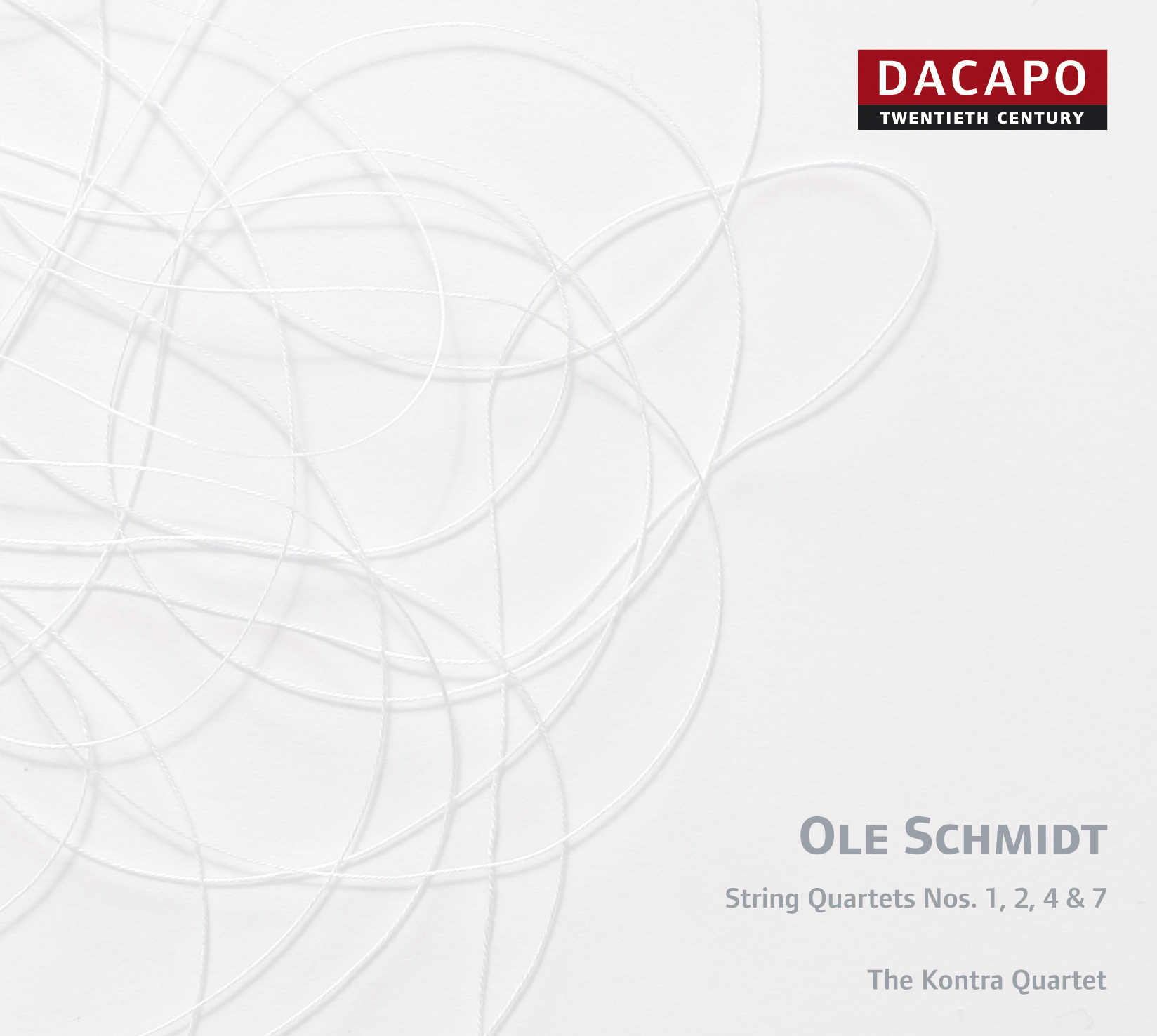 Many kinds of musical characters meet in the figure of Ole Schmidt: the composer, the conduc-tor, the teacher and the debater. But all are bound together in one strong personality - a loner in Danish musical life. Throughout his many years on the Danish and international musical scene, he has retained the personal courage to go his own way.

And this is how it has been right from the start, in his younger days when he earned his daily bread as a self-taught jazz pianist; but at the age of 20 he worked his way into the classical music world by being admitted to the Royal Danish Academy of Music in Copen-hagen. There his studies included composition with Vagn Holmboe. Ole Schmidt's first major composition was a piano concerto, but it was as a ballet composer that he made his name. He wrote among other things the music for Ildmageren (The Fire-maker) in 1952 and Bag tæppet (Behind the Curtain) in 1954. With the ballet Fever in 1957 Ole Schmidt assumed the conductor's baton and the next year he was engaged by the Royal Theatre in Copenhagen as the conductor for the ballet. This post lasted until 1965, and it was during this period that he met and married the former deputy ballet-master and stage director Lizzie Rode.

Ole Schmidt's whole musical career has been divided up into three roles: composer, conductor and teacher. And it is precisely Ole Schmidt's strength that the three aspects stimulate one another. The craftsmanship is in order in Ole Schmidt's rich oeuvre, the works are well conceived for the musicians, and super-added compositional structures are never allowed to prevent the music sounding good.

His sources of inspiration have been Stravinsky, Bartók and the French school, interpreted beautifully by Ole Schmidt in his own musical idiom. He has written works in most genres, but it is especially his succession of solo concertos that stands out in his output: concertos for accordion, tuba, guitar, violin, oboe, flute etc. To these we can add his famous through-composed music from 1983 for Carl Theodor Dreyer's film Joan of Arc. Ole Schmidt's close cooperation with the poet Jørgen Gustava Brandt on a number of hymns has provided striking, beautiful contributions to the renewal of the Danish hymn tradition.

As a conductor Ole Schmidt has primarily been inspired by his mentor, the Romanian conductor Sergiu Celibidache, and by Albert Wolff and Rafael Kubelik. He demonstrated his great format in 1974 when, at his own initiative, he recorded all of Carl Nielsen's symphonies with the London Symphony Orchestra. This was an achievement that opened the eyes of the world to both Carl Nielsen and Danish music as a whole. Contemporary Danish music has always held Ole Schmidt's interest as a conductor. He has conducted many orchestras in Europe and the USA. In 1978-1985 he was Principal Conductor of the Aarhus Symphony Orchestra. Ole Schmidt has always had the courage of his convictions, even if it has cost him dearly in some cases. But that too is a side of him that is an essential part of the complete portrait. Since 1992 Ole Schmidt has lived in the south of France, but his connection with Denmark remains strong and intact through his family and his summer home at Sjællands Odde.

Ole Schmidt felt both overwhelmed and honoured in 1954 when the legendary Bloch Quartet asked him to write a string quartet. The result was a work which in Ole Schmidt's own words explored and tested the nature of the instruments\, and which was inspired musically by the Hungarian composer Béla Bartók.

The quartet was written as one uninterrupted progression, but there are changes in tempo and character along the way which reveal a kind of division into movements. The quartet begins in the fairly quick Allegro moderato tempo with a characteristic melody in the first violin accompanied by the other strings. Melody and accompaniment soon merge into a close texture of parts where all four strings are melody-bearing. As early as this first quartet, Ole Schmidt employs a technique that becomes typical of his whole quartet output until today: closely-woven imitations of a theme through all four strings. The melody so to speak \\wanders\\ through the score.

New musical material is added little by little, while at the same time Ole Schmidt tries out the technical potential of the instruments. After the introductory treatment of a theme, the melodic contours are dissolved and the music is set in motion. In this phase of the quartet anything can happen, while Ole Schmidt reminds us of the initial theme (and the safe musical ground under our feet) with small hints.

A particularly agitated passage ends with a characteristic tempo change to Poco andante and a slow movement which in the composer's own words depicts \\Romantic Ole\\. But the music is not so romantic that it cannot offer conflictful material, which only loses its power when the cello embarks on a quiet melodic passage that is in turn abruptly superseded by the introductory theme in the first violin. This first string quartet has come to a happy ending, but the original theme and its mood have proved to have inherent conflicts and interesting qualities.

The second string quartet was composed in 1964 at the request of the Copenhagen String Quartet. According to the composer, it was meant \\to give the listener a direct musical experience\\. Ole Schmidt chose a four-movement form to this end, with the sequence slow-quick-slow-quick, where each movement offers a statement and a development of musical ideas in the classical sense. Yet it is far from being a standard movement technique that controls the course of the string quartet. It is borne up by the composer's intuitive feeling for the pleasure of music-making - it is catchy in its own wry manner.

The first movement, Largo, functions as an overture to the rest of the quartet. One stark block of chords succeeds another with increasing intensity and leads on to an elegiac, descending motion through all four strings. The state of meditative calm is however not to be sustained; a conflict is building up, and the stark chords return. The movement ends unresolved and runs straight into the next movement, Presto, where a theme is built up by a motion in thirds. This is stated in unison, but expands melodically, rhythmically and in the use of the four strings, which contrapuntally play off theme fragments against one another and create an overall powerful forward movement. Ole Schmidt makes use of something that recalls the metamorphic technique of the 1960s, as cultivated in Denmark by among others Vagn Holmboe and Niels Viggo Bentzon. Even when he introduces contrasting material and creates variation, it is on the basis of the fundamental motion in thirds that began the movement.

The third movement, Moderato, is the longest and most intriguing of the quartet. The cello begins with a passacaglia-like pizzicato bass figure where the beat count shifts between 8 and 7. Over this we hear a light, catchy melody in a style that recalls Stravinsky's neoclassicism. But beneath the surface more conflictful material is asserting itself in variants of the introductory passacaglia and of the initial theme. The movement builds up to a culmination a good halfway through, but ends in the same light style with which it began - calm has been restored. The fourth movement, Allegro molto, relates back to material and moods from the three preceding movements. Although its idiom seems random and purely expressive, it is built up rigorously over an introductory theme. The ending is thus at once surprising and logical.

The fourth string quartet was composed in 1969. It unfolds in a single movement, and although there are changes of tempo along the way, the basic character remains the same: a casual thought that does not really develop or take direction. Ole Schmidt is more experimental in this quartet than in any of the others.

The quartet begins in the tempo Grave with chords building up quietly and slowly, and from this a cautious melody is created by the first and second violin in close partnership. The tempo shifts to Allegretto con moto, and now a true theme emerges - or a motivic core consisting of a turning second followed by a descending tritone interval. This little motif becomes the material that binds the quartet together some of the way. Only in a shadow-play between first violin and cello does it later spread to all the strings. The character of the music becomes more intense, but then it reverts to something searching and fragmentary.

One hears snatches of the motif in the meantime, but in the end the music loses its structure and each of the stings is sent out in its own direction where anything can happen: powerful vibrato, glissandi and violin bows that bounce on the strings instead of bowing. The result is an odd, fragmented soundscape - like a dream one recollects. It does not cohere, and lies there in some far corner of the subconscious.

This central passage dominated by chance and improvisation leads on to a repetition of the slow introduction - yet again with the tempo marking Grave. This time, however, the build-up of chords leads to nothing concrete. After two attempts, the music peters out in an open chord.

The seventh string quartet was composed in 2002. Unlike the six earlier quartets, this quartet has something that resembles a programme: the movements describe, in turn, the composer's wife Lizzie Rode and his daughters Henriette and Tine. Ole Schmidt has explained that the music should not be taken literally as descriptions, but more as evocations of temperaments.

The first movement, Allegro moderato, is primarily characterful, although it can also be gentle, danceable, as already expressed at the beginning with the expressive theme of the first violin accompanied by more robust chords from the other strings. This movement plays on several idioms and shifts between simple happiness and conflictful sections where melodic ideas are thrown back and forth among the four musicians. The music is mainly melodically based, and at bottom it is tonal, although here too Ole Schmidt plays om ambivalence.

The second movement is written in a quiet, dreamy tonal idiom. The three light strings supply a pizzicato, dripwise accompaniment to a melancholy cello solo. This gentle mood is followed by a teasing section with a pentatonic scale, where the sense of a fixed pulse is dispersed. The wistful melody returns in the first violin, and what this movement offers is quite simple: two different musical characters that easily and elegantly supplement each other - as if the movement has neither beginning nor end.

In the third movement the mood shifts to that of a quite different, extroverted, tempe-ra-mental character. This too is dominated by characteristic melodic material, which is however not permitted to develop fully. The music constantly changes direction through abrupt rhythmic and melodic shifts, the glissandi of the strings and excited repetitions. One particular melodic figure insists on being ‘right', which gives the movement an almost virtuosic character. With its three-movement form, the seventh string quartet is classically structured, with this third movement as a festive finale.