Sound-magic and continuous transformation are key elements in the music of Danish composer Niels Rosing-Schow (b. 1954). This world premiere recording by the leading French ensemble TM+ presents five of Rosing-Schow’s most profound compositions, all exploring the concept of time: time as motion, as process, as imprints or mapping – and time as space. 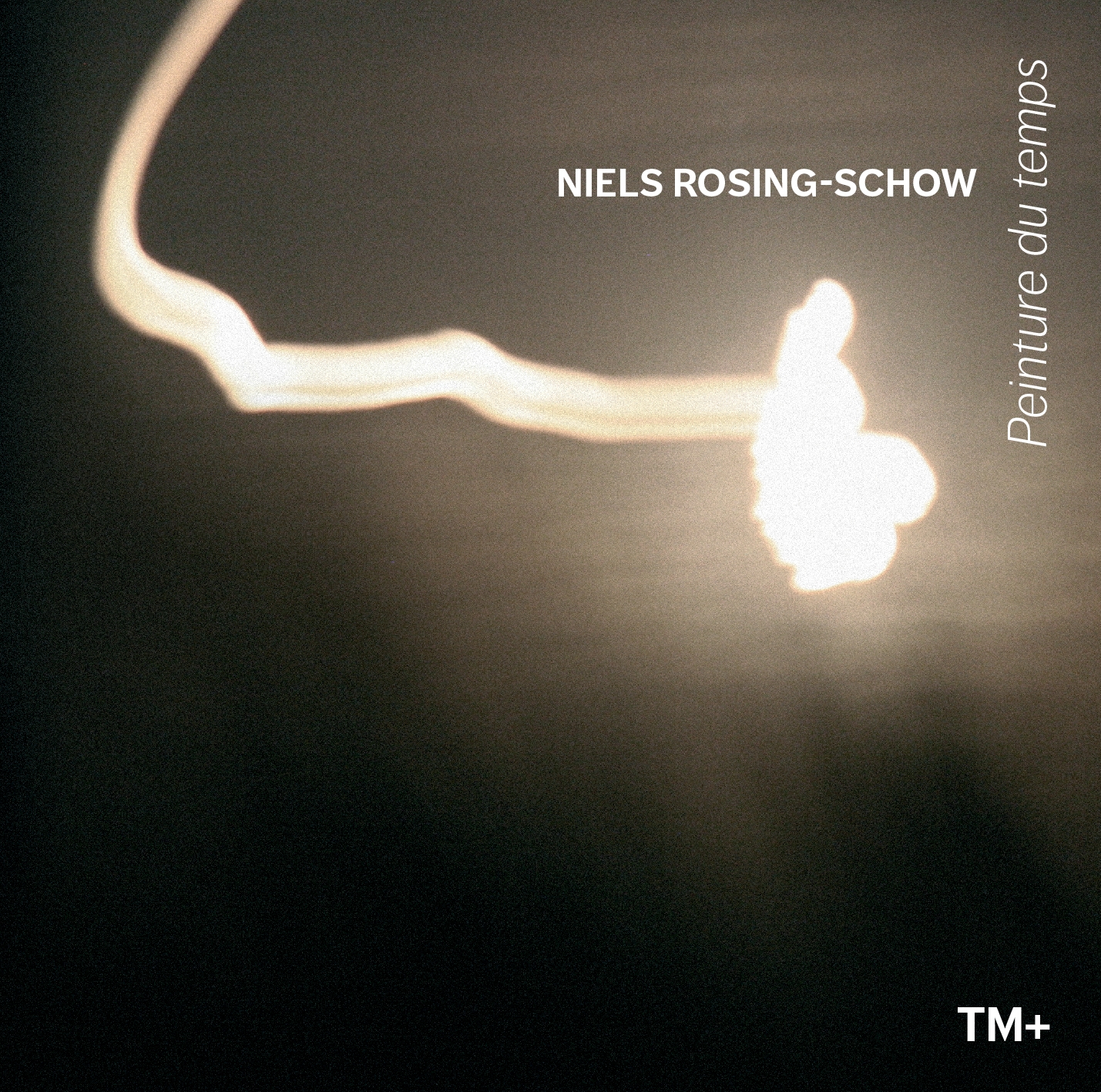 Time as motion, as process, as imprints or mappings, and time as space, are rewritten and explored musically and philosophically in the five works on this CD. In sound, -texture and form the works express various aspects of time as the dimension of music par excellence - as it is embedded in music by the composer, but also as the imprints that music leaves on the listener's mental screen.

In connection with the work Peinture du temps (Painting of Time), which is also the title of this CD, the composer Niels Rosing-Schow writes: Musical memory - recollection - is the canvas on which music - time - paints its picture\. As the eye moves across the picture, which thus gradually emerges for the viewer, so does the musical work grow up for the listener in time with the music, finally to exist only as memory when the music ends and the time of the work has run out.

In the work Vocabulary II we can experience the dimension of time as a pro-gressive transformation from one state to another. Such musical processes occur often in Niels Rosing-Schow's music and appear in various ways in all the works on the CD. Throughout the work I giardini dietro la città the transformation has a magical, dream-like character: it is music that unfolds the time-space of the dream.

The CD is rounded off by the ‘time trilogy' Spectre du temps, Empreintes du temps and Peinture du temps, three chapters in a story of time in music. The trilogy is dedicated to the French composer Gérard Grisey (1946-1998). Inspired by Grisey, who was himself profoundly fascinated by musical time, Rosing-Schow works here with three different musical/poetic times: metrically measured time - the relentless ticking of the seconds; the suspension of time - time ‘standing still'; and finally the fluctuating everyday experience of time, sometimes fast, sometimes slow.

Sound-poetry and the art of transformation

All five works possess the explicit sound-poetry and expressive power that are distinc-tive features of Niels Rosing-Schow's compositions. Immersion in the harmonies and sonorities of the material is a feature that becomes more and more pronounced in Rosing-Schow's production. In this he builds on the principles of the French so-called spectral music, in which \\harmonies and sonorities are one and the same thing\\, as the composer himself puts it. This sensually saturated treatment of sound displays the full tonal potential of the instruments, both individually and in the shifting instrumental combinations. Often it happens in ways that make it difficult to decipher the alchemy of the sound, and to tell the instruments from one another. The result is that the overall sonority expands and the auditory fullness and wealth of nuances in the work transcend the simpler direct impression the score may give.

Sound-magic and continuous transformation are key concepts for Niels Rosing-Schow and in particular for the selection of works on this CD. The music consists of sound-spectra in consistent, almost relentlessly progressing transformation, and this direc-tional specificity in the music makes time present in a very special way. Time is a fundamental condition of our life, but a condition to whose deeper qualities we rarely devote attention. When do we spend ‘quality time' reflecting on time? Perhaps in fact when we listen to music. So if we take the time and space to experience these works, immerse ourselves in their poetic sounds and varying progressions - one by one - the transformations of the music can hardly avoid rubbing off on the listener from the first note of the CD to its last fading tone.

I giardini dietro la città can be heard as a continuous motion through several states. With very few striking changes the work glides from one interval of time into the next. The music begins so to speak in one place and leads the listener through shifting musical landscapes, with the flowing inevitability of dream-time, to a different place. And it was in fact a dream the composer had in the period when he was composing the work that gave the work its title: I giardini dietro la città (The Gardens behind the City). In the dream the composer is lured from a square in an Italian city in behind a wall that reveals the first garden, beautiful and flowering. He carries on to the next, which is even more lush and exuberant, until he reaches the last garden of intoxicating beauty, whose -dilapi-dated back wall reveals a panoramic view of the open Italian landscape.

The reference in the title to Italian landscape seems to evoke cicadas, beating wings, birdsong and running water which can suddenly be manifested to the listener through the detail-rich instrumentation. Music and dream fuse together in the multi-faceted sound-spaces of the work.

Vocabulary II is the oldest work on the CD, but it anticipates certain compositional features that become clearer and more consistent in the composer's later pieces. In Vocabulary II Rosing-Schow explores quite simple tonal spectra and combines them with the vowels in his own short text, such that certain instrumental sounds are associated with certain characteristic vowels throughout the work. The formants of the vowels grow so to speak into the instrumental universe.

Vocabulary II starts simple and focused, with the French soprano Raphaële Kennedy whispering the words five and meeting in a ‘duet' with her own voice electronically delayed. The words density and changing are added, song and whispering interact, and gradually tempo and intensity increase until the soprano and her electronic double carry the instruments along with them. In the subsequent development the words are dissolved into their smallest components and touch suggestively on small words like I and me. The dissolution and the music's ‘throwing around' of the word-fragments generate new combinations, and towards the end identity and fainting emerge as new words and meanings, and the related instrumentation creates a new, dark, diffuse sound-universe. The music runs through a clear transformation and becomes something quite different from what it was. The words comment on and reflect the music, and vice versa.

The title plays on the double meaning of the French word spectre: spectre and spectrum, so the title means both The Ghost of Time and The Spectrum of Time. It refers both to the music's omnipresent work with sound spectra and to the idea that sounds as tonal -images and movements are embedded in time, and that the tones of the past - the spectre of time - can be evoked in the present as ghostly shades. The spectral sounds and movements in Spectre du temps resuscitate fragments of Grisey's work Vortex temporum from 1994-96. Specifically, the small quick arpeggio motifs of the middle section are references to the beginning of Grisey's work; but in other ways too this music ‘haunts' Rosing-Schow's work. However, there are other ‘shades' in the work than these impressions of alien music, since non-musical sound-images have also left their traces. The composer says that the last three quiet minutes of Spectre du temps are the echo of a distinct memory-image - the sound of melancholy flute notes from two bullfinches on a branch in a desolate winter landscape.

Time is alive and is in constant transformation. Our experience of time changes con-stantly, depending on context and mood. That ‘the passage of time', as we experience it, is in this way a mirror of ourselves to which we can sensitize ourselves is a fundamental idea for this work. The title Empreintes du temps (Imprints of Time) seeks to capture this.

Empreintes du temps has a processual character, since the music is constantly on its way and undergoes transformations in changing tempi, tonal differentiations and -rhythmic contrasts. Here the composer explores the three above-mentioned musical times: metrically measured, pulsating time (especially towards the end of the work); the experience that time ‘stands still' - with a musical term ‘senza misura'; and finally the music works somewhere in between with a vital, flexible and elastic time.

The musical character is vibrant and tremulous with its use of trills and arpeggio -figures, and the motions of the flute sometimes recall Debussy. The composer works systematically with micro-intervals - intervals smaller than a semitone - and virtuo-si-cally exploits the two instruments' many timbral possibilities within a scale that ranges from instrumental noise through notes mixed with noise to pure notes of different timbres.

The idea of transferring the process of perceiving a painting to the experience of a piece of music assigns an important role to time in the understanding of both. If one goes more deeply into the comparison between painting and music, the references are many, not least in the descriptive metaphors to which we resort: glaring contrasts, foreground and background, motifs etc. In the work Peinture du temps Rosing-Schow takes his cue from the visual metaphors we use to describe the sounds of music: we speak for example of tonal colouring. For a composer who thinks of music as sound spectra changing over time, it is very reasonable to be inspired artistically by the parallels between the spectrum of light and the spectrum of sound. The work uses a palette of sounds which - as in Empreintes du temps - ranges from passages with white noise through ‘coloured' noise and inharmonic spectra to the pure, ‘bright' harmonic spectrum.

In this work too the use of the instruments is notable, since the saxophone very rarely sounds like a saxophone, but rather like a fifth string instrument. It merges imperceptibly into the network of sheets of sound with a varied inner life, while textures and sound spectra continuously flow over into one another. However, there are a few ruptures that function formatively in a more conventional sense. The transformation of the music is so striking that both the music and the listener find themselves in a quite different state than at the beginning once the work has been played to the end. And yet the music has been able to touch on its own starting point before it implodes in the airy final sound of the saxophone.