Explorations of continuity and discontinuity are central to Danish composer Kasper Rofelt’s aesthetic. Dichotomy, the aptly-named album title work, presents a challenge, combining contrasting and even incompatible materials. This can be heard across this disc, which features new chamber works by Rofelt including a great variety of musical characters and idioms. 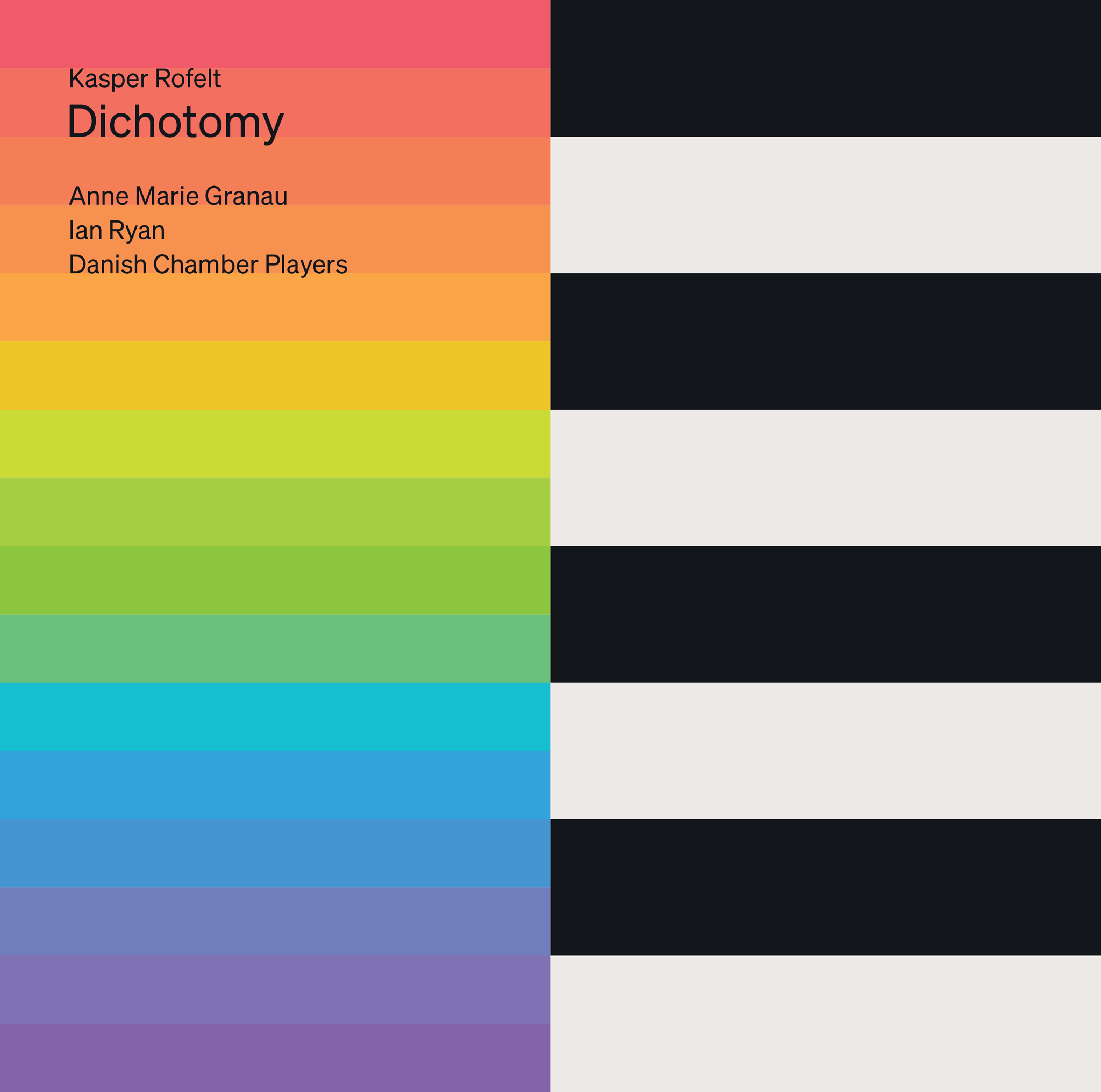 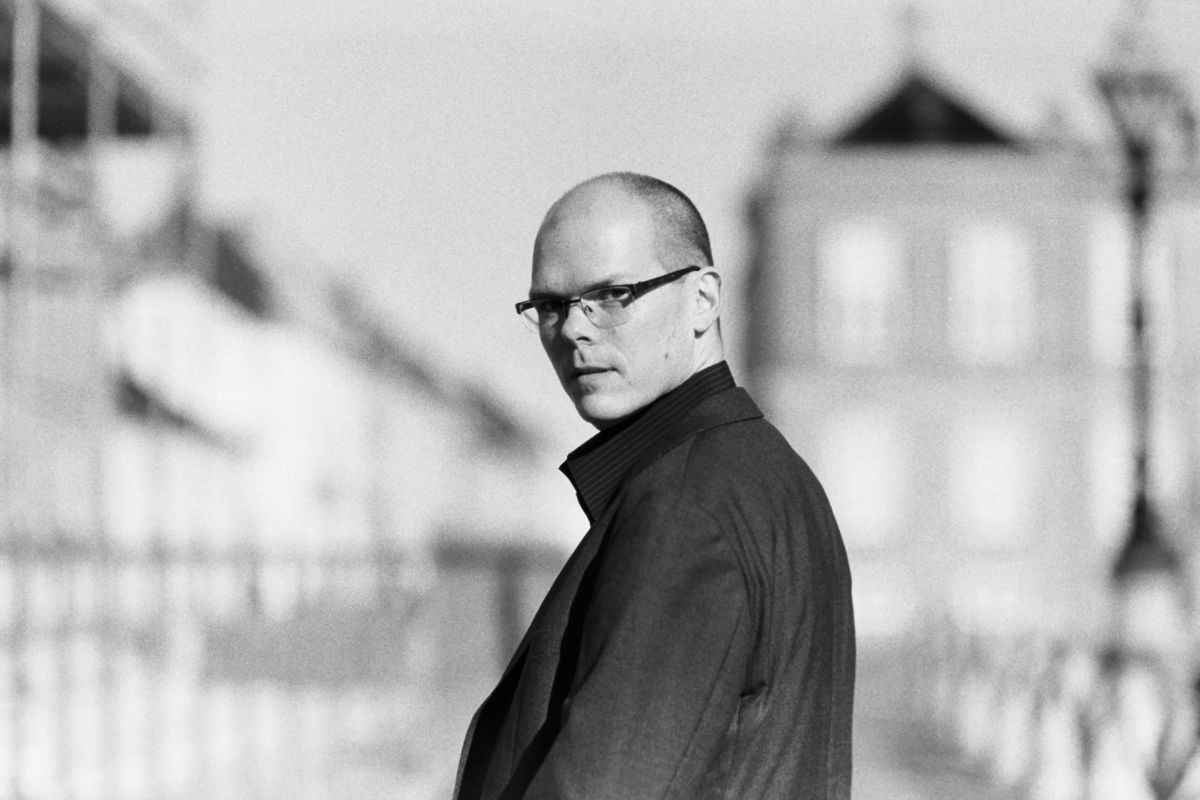 A shadow of itself

The ‘dichotomy’ of the title work on this recording refers to an opposition of musical techniques. Dichotomy, for eight musicians, was commissioned by Danish Chamber Players (Ensemble Storstrøm) and first performed by them in September 2021; this is its premiere recording. Its two contrasting movements reflect its title on one level: a playful, lyrical first movement and a rhythmically energetic second one. Yet each movement contains its own dichotomy too. The rhythmic, tutti propulsion of the second (made up of irregular combinations of two, three, and four quaver figures), for example, contrasts with a quieter central section, in which solos for clarinet, flute and bassoon are prominent. A long solo for piano restores the rhythmic energy before the ensemble returns for the work’s final section. In the first movement, the contrasting elements are more closely interleaved: bundles of horizontal polyphony, in which every voice is equal, are cut vertically by woodwind chords and patches of percussive, col legno battuto playing from the strings. As the movement proceeds, these become more prominent. As the musical continuity is increasingly stretched, ever-larger ‘holes’ appear in its texture; by the end of the movement, the composer says, the music ‘almost seems to become a shadow of itself’, with the longer line replaced entirely by sparse, isolated sounds.

Explorations of continuity and discontinuity are central to Rofelt’s aesthetic, and the challenge presented by Dichotomy of combining contrasting and even incompatible materials can be heard across this disc. In Entourage II (2013) for violin, horn and piano, the musical materials are deliberately restricted: a bright, rising arpeggio and a resonant cluster chord. For the frequency of these repetitions, Rofelt calls this one of his most ‘neurotic’ works. At the start the two elements are heard together, but as the music continues, they establish their own evolutionary paths through small developments or variations inserted into the repeating texture. The arpeggio becomes violin glissandi, a scale, a jagged melody and, towards the end of the work, a majestic, echoing cadenza for horn. The cluster becomes a tolling bell, a rumbling drone, a shivering trill and, beneath the horn’s cadenza, a bed of resonance created by holding down the piano’s sustain pedal.

A similar obsession with limited numbers of materials also informs two of the shorter works on this recording, Forward! (2014/20), for the unusual instrumentation of the Bb contrabass clarinet, harp, piano and string trio; and Stay (2012), for flute, clarinet, violin and cello. Although Rofelt’s music often relies on small collections of materials and a large amount of repetition, it is not minimalistic. With its insistent rhythm, homophonic texture, constant forte dynamic and drone bass (contrabass clarinet and harp never move from a low G), Forward! comes close to the music of, perhaps, Louis Andriessen. However, these static elements are destabilised by unpredictable changes in metre and a harmonic technique in which only one or two notes change at a time, creating continuous variation within a relatively fixed framework. In Stay, this idea is translated into the combinations of different materials. Once again, only a small number are used, chosen not only for their timbral variety but also for their rhythmic and harmonic homogeneity. They include pulsing cello quavers: swinging, ‘hoedown’ violin trills; staccato clarinet thirds; a descending legato phrase for flute. No development or variation is applied; the music’s forward motion comes instead from the way in which they create continually changing contexts for each other. As layers are variously added and taken away, foreground melts into background, and then is replaced entirely before starting something new. In this way, Rofelt creates a kind of ‘staircase’ effect in which an illusion of stasis is created even though the music is always moving forward.

The other three works are all related to others in Rofelt’s catalogue. Around (2015), for cello and piano, is a short study for the cello concerto Night Phase (2016–17), concentrating on rapid changes of cello technique, precise articulations of rhythm and pitch, and details of ensemble coordination. The longer Sérénade pour Ionesco (2019) is an expansion of a work in three movements for harp, written in 2009. The harp remains important in the ensemble work, which the composer says can be considered almost as a concerto: the instrument features prominently in movements 1, 2 and 4 in particular. Finally, Cantando (2019), for eight instruments, is an arrangement of a song for soprano and piano Rofelt composed in 2007, in which the clarinet mostly (although not completely) takes over the role of the singer.

Sérénade pour Ionesco is unusual for having an extra-musical inspiration; the other works on this recording might all be considered abstract or ‘absolute’ music, with no reference outside of themselves. In his music Rofelt often seeks to create expressive spaces for musical interpretation without specifying a particular emotional content. His technique of juxtaposing materials without development is one way in which he does this, creating a need for interpretation and meaning without directing that towards a particular emotional or dramatic goal. Despite its reference to the Romanian-French playwright Eugène Ionesco, the Sérénade takes a similar path. Rofelt’s inspiration is not specific characters or stories from Ionesco’s plays, but the strange juxtapositions of his absurdist style. The first, ‘Ouverture’ is in the style of a harp fantasy, to which the ensemble adds resonance and variations of timbre. The second, ‘Berceuse’, also centres on the harp, but this time its impressionistic gestures are absurdly contrasted by the ensemble – dry percussion from the three strings knocking on their soundboards and, later in the movement, the squeaks of dog toys from the three wind instruments. The third movement, ‘Intermezzo’, jumps starkly between smooth, modal ostinatos with a Webernian texture of widely spaced atonal (but not serial) figures that concludes with a broad rising arpeggio (played first by strings and then by piano). This pointillistic material returns, with some variations, in the fifth movement, also titled ‘Intermezzo’, while the last movement, ‘A Room with no Windows or Doors’, recasts the ‘Ouverture’, but with additional ensemble layers and insertions, including new melodies for alto flute, clarinet and bassoon, and a more conclusive ending.

Absurdism is most apparent in the Sérénade’s fourth movement, an imagined meeting of Ludwig van Beethoven and Gustav Mahler, ‘Conversation avec Louis and Gustav’ (Louis is the French equivalent of Ludwig, and the name Beethoven was sometimes known by as a child). Written almost entirely for piano and harp, the former quotes obsessively the diminished seventh chord from the beginning of Beethoven’s C minor Piano Sonata, Op. 111 while the latter adds ornamentation before arriving at a passacaglia-like bassline from the first movement of Mahler’s Ninth Symphony, over which Rofelt adds a contrapuntal melody of his own. Like the arrogant Professor and infuriating Pupil in Ionesco’s The Lesson, the two composers insist on talking at cross-purposes: Beethoven seems particularly stuck in his ways, while Mahler is keen to go off on unrelated tangents.

Written two years before the Sérénade and fourteen years before Dichotomy, Cantando is the earliest work on this disc. Like the others, it seeks to create spaces that are expressive without referring to specific emotions: sharp pizzicato piano clusters with hushed harp tremolos; a thickly chromatic string polyphony; fractured rhythms cut through with stabbing piano; a rich ensemble chorale. Although the contrasts between sections are dramatic, and the sections themselves evoke certain narrative moments (anticipation, loss, anxiety, resolve), any story that might be attached to them is in the imagination of the listener. Although Rofelt describes Cantando as a ‘very operatic’ piece, as in Sérénade there is no narrative or literary basis to the music. Even the original song of which it is a transcription set nonsense phonemes rather than a text: this is an opera without words. Accordingly, the short quotation at the end of the work of the C major Prelude from Book 1 of Bach’s Well-Tempered Klavier Cantando is not intended to add extra significance or complexity but is an abstract symbol of a clearer, more open sound that contrasts with the free chromaticism of the rest of the work – and so dissipates whatever appeared to have been there.

Tim Rutherford-Johnson is a critic and musicologist, and author of Music after the Fall: Modern Composition and Culture since 1989. He is currently writing a book on the music of Liza Lim.