Esbjerg Ensemble, Christopher Austin
Of contemporary developments in the thriving music of Denmark, one might say that all things are possible, and some things are more possible than others, but none might be predicted. The work of Morten Olsen is one such phenomenon, growing from a rich and deeply rooted culture, yet flourishing in a way that no amount of aesthetic wisdom might have foretold. The four items in this collection are the most recent testimony to his adventure in composing.
Buy album 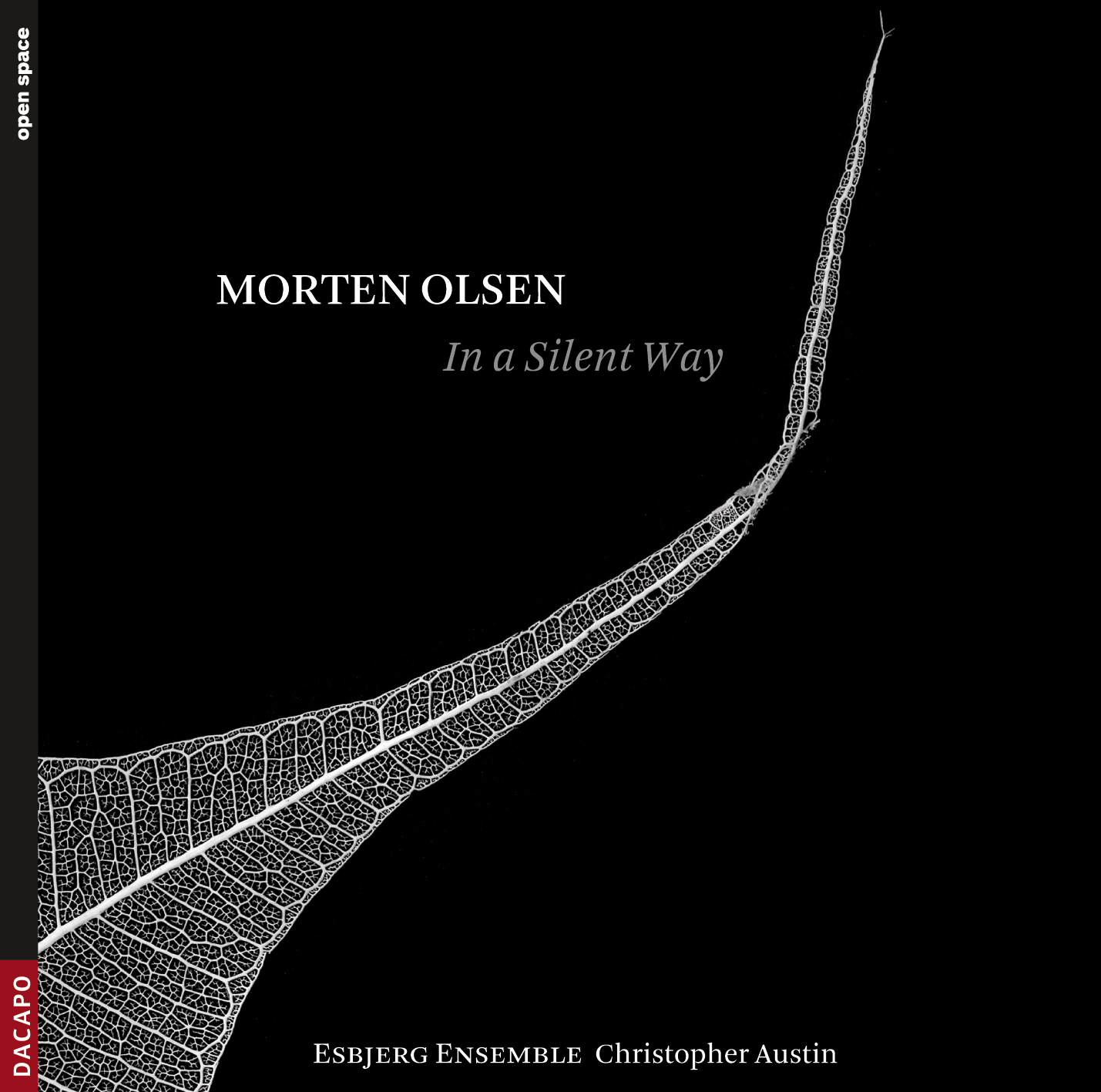 Of contemporary developments in the thriving music of Denmark, one might say that all things are possible, and some things are more possible than others, but none might be predicted. The work of Morten Olsen is one such phenomenon, growing from a rich and deeply rooted culture, yet flourishing in a way that no amount of aesthetic wisdom might have foretold.

Born in 1961, he began his career in electronic jazz-fusion, and since then has charted his own course through the perilous seas of modern music. In the early 1980s, while other young composers still grappled with conflicting ideologies of their art as science or as Zen Buddhism, he focused his attention on the present and practical, leading an electric jazz quintet and composing its entire repertoire. As co-founder in 1990 of the Athelas Sinfonietta Copenhagen, one of Denmark's leading ensembles, he was well aware of the challenge to composers confronted by conflicting perspectives of the new. Even so, his vocation at this time was to train as a double-bass player at the Royal Danish Academy of Music, gaining its diploma in 2. More recently he has applied his skills to learning the electric guitar, a part he takes in the present recording of In a Silent Way.

The evidence, therefore, is of a composer gifted with patience in his search for identity and an authentic voice, who in the best professional tradition - Nielsen, Dvor?ák, Bach - has learnt his craft in the school of actual doing. Engaged with musicians making music, he has since 1993 also created a corpus of works that range from solo instrumental pieces to orchestral and choral essays. The four items in this collection, the fruit of residencies with the Esbjerg Ensemble from 2004 to 2005 and from 2007 to 2008, are the most recent testimony to his adventure in composing - begun at an age when many a former wunderkind might already be showing critical symptoms of running on empty.

How Olsen himself has met the challenge of style and idea in our contradictory times the scores themselves reveal. Over and above their individual impressions, they impart collectively the vision of a composer for whom fantasy and eclecticism are neither a self-conscious rejection of modernism, nor the floundering of those who, credulous of post-post modernism, can believe in anything. Instead, knowing his own intentions, he has embraced whatever he deems fit for his purpose, whether versions of the infinity series of Per Nørgård, or Boulez-like cell forms or other aspects of complexity. Nonetheless, he is also no stranger to experimentalism, as his original attitude to titles and (writer beware!) the role of words about music confirm. The result has been an exciting and unpredictable oeuvre that looks to the future through an undogmatic review of the recent past.

In Ictus, composed in 2005, and the earliest piece in this collection, the context is the interaction of tempo and structure which, in the music of Stravinsky and of Elliott Carter, has been a defining force in musical modernism. A prosodic term for the strong beat of metrical feet, the title neatly refines into a single, intuitive experience the nature both of its rhythmic transformations and of their emotional corollary. For, by coincidence, after completing Ictus, Olsen found a powerful verbal account of the effect intended in his music in a poem of the same title by his fellow Dane Peter Christensen Teilmann (Kendemærket, 1998), describing our lives in terms of ‘chaotic exceptions / and strong, modest questions about oblivion / repeating themselves / as a gesture'.

So the context is expressive too, and from an ensemble of single woodwind, horn, piano, percussion and strings, Olsen draws violent sounds and whispered dynamics approaching silence, but the silence of concentration not of meditation. Though tonal gestures briefly take centre stage, the musical surface is far from a matter of borrowed values. Rather, its stratified textures suggest a complex interior working. A single, controlling rhythm dominates the argument, ‘like a DNA string', as Olsen describes it, using bodily metaphors that also relate the piece and its title to the beating human heart. Low woodwind can be heard announcing its presence in tersely emphatic rhythms, for example, soon after the opening of the work. Elsewhere, even when inaudible, it is present in augmentations and other variations that posit a formal unity.

In the opening section, those terse eruptions throw into high relief more serene ideas from instrumental groups precisely defined in terms of pitch and texture: solemn chords on piano, compacted semitones on strings, and tendrils of woodwind melody. Discovering pace without momentum, other elements move out of phase with a silvery ostinato, and things stir into life with a brief flourish above the DNA pattern on pizzicato bass. The ostinato returns, now deeply embedded in the lowest regions of the keyboard, before the music, switching with increasing animation between suppressed and overt violence, presses ahead to a hollow-toned climax on piano and marimba. When the materials of the opening section return in varied and extended forms, strings are no longer clustered, and woodwind flower into expressive melodies for bass clarinet and english horn. After one last outburst, the ‘rhythmic string', now in lengthy pulsations of repeated chords on cello and double bass, signals the transition from felt duration to oblivion.

It was Debussy who not only radicalised silence into an expressive mode, but also, with Syrinx for solo flute, revived the pre-classical genre of solo instrumental melody. For In a Silent Way of 2007, which Olsen has described as a kind of written improvisation on a movement from an earlier work, he loaned his title from Miles Davis' classic fusion album of 1969, but also revived what was a profound part of Bach's technique and, in the hands of recent masters such as Luciano Berio, a typically modernist ideal. To this heritage of solo line, presented by the bass flute, Olsen adds the notion of commentary, delivered by accordion, electric guitar, vibraphone, percussion and string trio. This is less an amplification by which, for example, a solo violin prelude becomes a baroque sinfonia than a linear expansion that dwells on a melody's subtle intervallic content. And, as in Ictus, elements both of fragmentation and repetition are present, but here translated in terms of a broad strophic melody that resonates in points of sound through silence and slow time.

Dissolving the original content till its presence is more sensed in the imagination than felt by the nerves, each repetition dwells on the theme in discretely varied terms: sinister muted drum beats, a rasping violin spiccato, and bent notes on electric guitar to signal the end of the first, second and final statements. Except for the first repetition, which elides the original opening, the formal pattern is unambiguous. In the penultimate strophe the temperature rises to a textural and dynamic climax before returning to the cool mood with which the music began.

As the Doric tones of the bass flute define the mood of In a Silent Way, so the resonance of 24 tuned gongs add mystery to Oryq, also composed in 2007. First performed at an -Esbjerg concert that included the Schubert Octet, it is scored for the same ensemble of clarinet, horn, bassoon and string quintet, and is also in six movements. In the composer's words, ‘the gongs are an extra element, a solo part in the work which, on the other hand, is not a solo piece for gongs and ensemble.' Likewise, though Schubert's music is magic-ally recalled in the rapt stillness of the second movement, it is not the point of the piece, though an undoubted accessory to the act.

Rather, and without anachronism, Oryq creates a modern divertimento from values of purely musical connectedness. Thus the second movement is both a point of arrival after the preludial opening, and is itself vested with a sense of incompleteness that in turn demands a sequel. In the final movement, the opening litanies for gongs and violin return conclusively. Before that, two brief and brutal scherzi (movements three and five) add to the unity of contrasts, the former both dogged and aggressive, the second offsetting gritty string chords with a chant-like horn and rebellious bass clarinet. Here, as in the opening movement, the persistent background of gongs in even notes suggests fluidity. Even so, the fact that, in Uzbekian dialect, Oryq refers to a kind of watering channel was unknown to the composer when he chose the word for its purely phonetic quality.

And in the music for Kata of 2008, dedicated to the Esbjerg Ensemble, Olsen was concerned from the outset to avoid all verbal reference, and to apply his title retrospectively in relation to its abstract qualities. If the music suggested the name, then this Greek prefix was an inspired choice, denoting depth and descent in many cognates, as well as drills in computer programming and, as an oriental homophone, a strict routine in martial arts. It also relates to the Victorian mathematician Charles Howard Hinton, whose theories of four dimensions, involving the concept of Ana/Kata, Olsen found no less apposite than these other associations to aspects of his music.

Scored for an ensemble similar to that of Ictus, with the addition of an accordion, Kata is both summative in relation to the earlier works on the disc, while also proposing further stylistic developments. Though directing his imagination in more sectional ways, Olsen retains the rhythmical hierarchies of Ictus, but refashioned by the meaningful contrasts of Oryq from patterns of slow change into a highly dramatic experience.

Throughout, the lower instruments feature prominently in the sound of bass flute, bass clarinet and English horn. In the first half the idea of ascent and descent is figured thematic-ally in the bassoon. Its repeated attempts to rise above the others with a stumblingly assertive statement are rewarded with a short cadenza before a weightless episode for piano and vibraphone diverts our attention. When the opening returns, the bassoon now at one with the ensemble, its material is impressively quickened and compressed. Driven by wild solos on clarinet and horn to a pounding climax (complete with brown paper bag in the percussion), and cross-cutting with cavernous piano clusters, the music enters a new phase. Gone are the obstinate bassoon and conditions of strife. Instead, in a minimalist C major, a drily repeated thought on marimba, a violin melody and rasping low-woodwind chords reconcile Ana/Kata in a single texture, embodied in the gesture of bass-flute arabesques. Embers from the first half are briefly reignited. But Kata closes with more of those cavernous clusters, in immensely slow pulsations that toll farewell from the literal deeps of the piano keyboard.

Morten Olsen has been engaged as Composer in Residence with the Esbjerg Ensemble from 2004 to 2005 and from 2007 to 2008, sponsored by the Danish Arts Foundation. The works on this CD have all been composed as a part of this engagement.
Array ( )
randomness