Else Torp, Per Pålsson, Mathias Friis-Hansen

Drama, surprise, humour and still life - with a bubbling undertone of anarchy. Composer Ib Nørholm (b. 1931) presents us with a delightful twist on Danish nocturne and condensed music drama for two in Tavole per Orfeo. The world premiere recordings of Still Life and Per Pålsson's guitar arrangements of Flowers from the flora of Danish poetry unfolds as a fascinating testimony to an inspired encounter between words and music - and a meeting of strong artistic personalities. 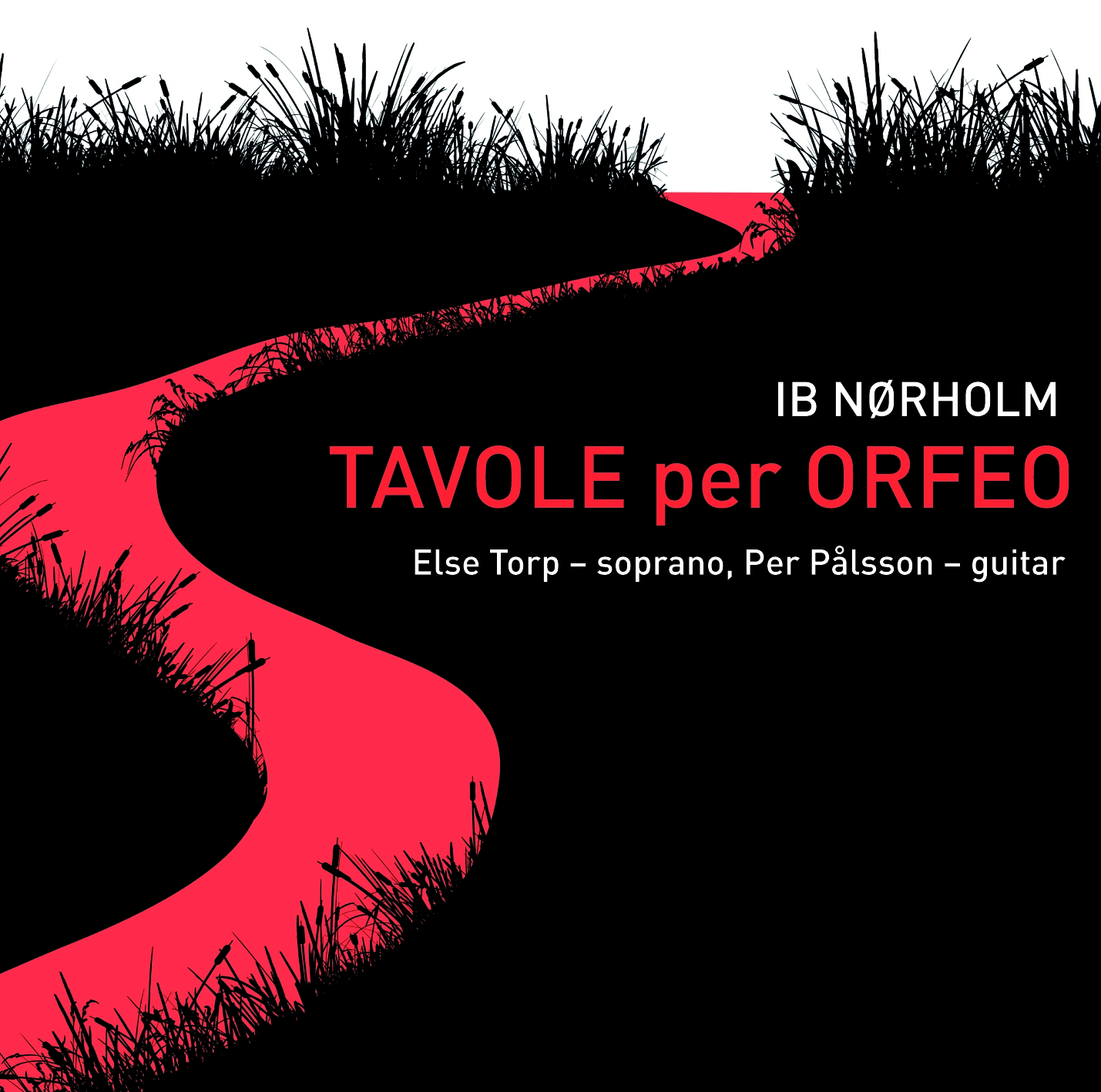 Ib Nørholm and the Danish song

Few if any living Danish composers have understood as well as Ib Nørholm how to perpetuate Lange-Müller's and Carl Nielsen's Danish song tradition from the 20th into the 21st century. Nørholm is the lyric poet of the post-war Danish composer generation, and as such he already began composing as a high school student with the opera The Snail and the Rose Hedge (1949). His years as a student at the Royal Danish Academy of Music (1950-56) gave him a thorough grounding in classical composition technique and the aesthetic doctrines that Carl Nielsen's pupils and successors had laid down in the name of their mentor.

Ib Nørholm was a good pupil and lived up to the ideals with both solo songs and choral works. His preferred poet in those years was Halfdan Rasmussen, and this may be have been due to the impish glint in Halfdan's eye. Revolt was simmering in the academy student, and it broke out around 1960 with studies in Darmstadt - then the international citadel of modernism - and the Danish presentation of FLUXUS, in which Nørholm was a driving force. Ib Nørholm became a modernist and an internationally famed serialist, and he reached what Boulez called the farthest reach of the fertile country\ with his instrumental-theatre piece Direction: Inconnue (1963).

There are not many songs from those years, but there is the opera Invitation to a Beheading (1965), where Nørholm's lyrical melos is mixed with the modernist triad of system, chance and theatre when the main character quotes Tatiana's \\Letter Aria\\ from Tchaikovsky's Eugen Onegin - a premonition of what was soon to come.

For the next few years Ib Nørholm appeared as a leading figure in the renewal of Danish composition music that goes under the name \\New Simplicity\\. At first this meant saying farewell to modernism's complexity and the denial of tradition, and welcoming back melody, tonality and clear contours. And as such it presents itself in Flowers from the Flora of Danish Poetry (1966 with piano, here in Per Pålson's arrangements for guitar, tracks 6-9 and 16-19), which is the earliest example of Ib Nørholm's vocal art on this CD.

There are rhymes and rhythms in the texts by among others Asger Pedersen, Frank Jæger and Grethe Heltberg, and they are matched by major and minor and strophic forms where the guitar lays harmonies below the melody of the singing part; most charmingly perhaps in Grethe Heltberg's \\Awakening\\ (track 6) which with its turn from the melancholy E minor of the introduction to the bright G major of the ending and with its simple melody has become part of the treasury of Danish song; one of those songs that can run round in your mind long after you have heard them.

In 1966 Flowers from the Flora of Danish Poetry seemed like a retreat to the safe stylistic bastions of his youth. But they were no such thing. On the contrary they were the preface to a synthesis of the familiar accessibility of the tradition with the ‘unheard' expressive possibilities of the avant-garde; a synthesis that could already be glimpsed in the next solo songs that Ib Nørholm completed: Still Life (1968, tracks 1-5).

Here the fixed key signatures and strophic forms have been replaced by free tonality and a through-composed progression that fits Poul Borum's modern poetry. The guitarist has been joined by a percussionist, and with their preludes and postludes they forge the songs into a cycle where the singer dissects the text into fragments and phonemes which she deciphers musically with virtuoso leaps and intimate phrases. Still Life is at once melodic and modern.

Still Life is the first solo songs that Ib Nørholm wrote to texts by the poet and master scholar of literature Poul Borum. The collaboration between the two began in 1966 with the choral work Sacrifice. It continued with the choral work Jongleurs, with Nørholm's use of Borum texts in his Second Symphony and with the work Tavole per Orfeo (-Tablets for Orpheus) all of which come from the years 1966-71. And it lasted until Poul Borum's death in 1996. Thirty years of close if not always smooth collaboration with Denmark's greatest connoisseur of new international literature meant an -invaluable inspiration for Ib Nørholm. It undoubtedly helped to keep Nørholm active in vocal music for several years during which he was developing into one of -Denmark's most important and most productive symphonists, chamber-music -composers and music dramatists.

Nørholm and Borum inspired and supplemented each other. This can be seen in the centrally placed work here, Tavole per Orfeo (1967-69, tracks 10-15) which from Poul Borum's pen are three songs that are not sung by Orpheus, but by Eurydice, the eternally loving muse and wife whom Orpheus took out of Hades with his divine art, but lost again when he wished to ensure, with his humans doubts, that she was really following him back from the underworld.

Ib Nørholm transforms these three songs into a dialogue between Eurydice and Orpheus. She sings and plays the percussion instruments, he plays the guitar. Her lines are songs that he accompanies. His replies are guitar solos that follow each song. Thus Tavole per Orfeo becomes a drama with her as the active party and him as the reflective one. Eurydice introduces herself as muse in the first song (track 10) and in the second song (track 12) develops into the wife who steps firmly into character to wrench her husband out of his artist's dreams and make him see reality.

\\Rocks are rocks because they stand. And when rocks dance they are not rocks. Everyone knows that.\\

BOOM! The artist's dreams are burst like the balloon Eurydice explodes with her cigarette. Orpheus tries in vain to gather up the fragments with a desperate guitar solo. But Eurydice has gone - only the blood that \\runs like a tiny river over the grass\\ shows where.

Twenty years separate Tavole per Orfeo from the last song on this CD, Whispers of Heavenly Death (1987, track 20). The text is by Walt Whitman, but surely Poul Borum's Danish translation inspired Ib Nørholm to compose it?

Here the roles are reversed. The guitar leads the way and creates a \\nocturne\\ mood that the soprano interprets with text and melodic phrases. The battle between art and reality is over. Neither won, the survivors look up, tired and melancholy, at the night sky with \\great cloud-masses\\ and a \\half-dimm'd, sadden'd far-off star appearing and disappearing ... on the frontiers to eyes impenetrable a soul is passing over\\.

Here the combination of tradition and modernity flows with classical serenity in the mature Ib Nørholm's song, where a symmetrical form is interpunctuated by the harmonics of the guitar as glimpses of a \\half-dimmed, sadden'd far-off star\\. Ib Nørholm crosses the boundaries of the flora of Danish poetry and reaches \\the grass that grows wherever the land is and the water is, This the common air that bathes the globe\\.

Project coordinators: Else Torp and Per Pålsson

We also wish to thank Paul Hillier and - not least - Ib Nørholm for their time and advice given on this production.