Svend Nielsen (b. 1937) is an important figure in Danish music. He has written an impressive body of work in the Romantic-Impressionist tradition, and as a composer he balances between the lyrical and the succinct. This CD features Svend Nielsen's most extensive vocal work Butterfly Valley, based on a famous sonnet cycle by the Danish poet Inger Christensen. It is poetic vocal chamber music that unfolds as a grand, sensual tour de force - a major work of contemporary Danish music. 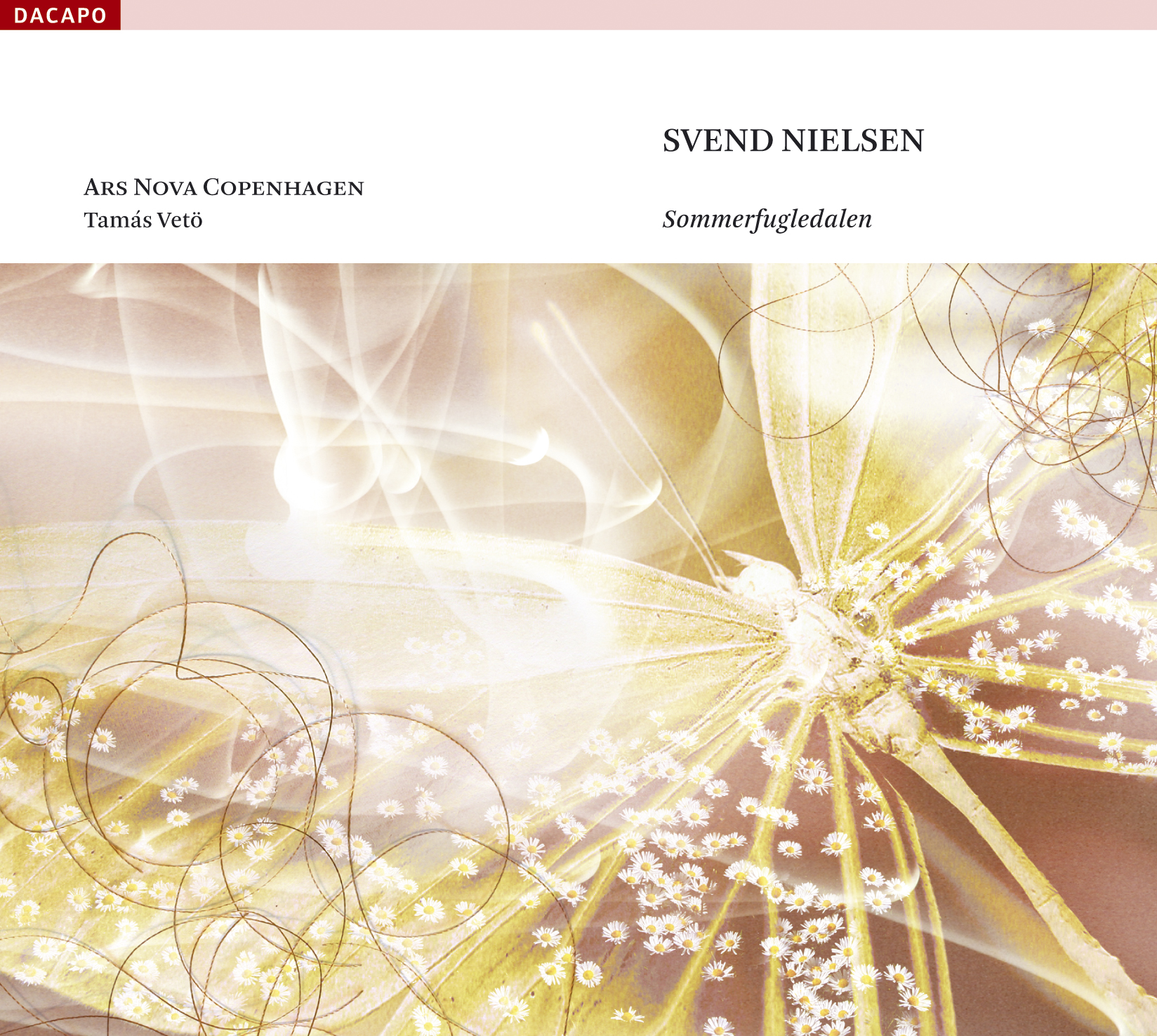 For decades the composer Svend Nielsen (b. 1937) has been an important figure in Danish music, not least on the musical scene in Århus. For more than 30 years he taught music theory at the Royal Academy of Music there, and he has been responsible for the training of many Danish composers.

He was himself a pupil of Finn Høffding, Vagn Holmboe and Per Nørgård, but made his debut relatively late as a composer. Before that he had graduated in musicology at the University of Copenhagen and in music theory at the Royal Danish Academy of Music in Copenhagen. He also thought about reading architecture or meteorology, but in 1962 he made his official debut as a composer with the ‘Nordic-lyrical' "Three Songs" to poems by Gustaf Munch-Petersen.

Over the next few years Svend Nielsen worked with serialism and other avant-garde techniques. However, at the end of the 1960s he and other young Danish composers turned their backs on modernism. "The New Simplicity", their reaction was called in Denmark. For Svend Nielsen this also involved an orientation towards the romantic, impressionistic and lyrical that had always been his greatest interest.

Over the years Svend Nielsen has produced a fine succession of works. The quantity has of course been somewhat restricted by his many years of teaching work, but his creativity has not abated with the years - rather the contrary. Among other things he has written two symphonies, a violin concerto and other orchestral works, among which Nuages and Metamorphoser, even with their titles, proclaim their affinities with a romantic-impressionistic tradition. But it is vocal music in particular that is typical of Svend Nielsen. He is profoundly interested in poetry and has set many Danish poems to music - including great classics of Danish poetry, such as the works of the Symbolist poet Sophus Claussen, whose texts Svend Nielsen has used in two distinctive works: a setting of the long poem Imperia for choir and orchestra (1982) and Ekbátana for mezzo-soprano and orchestra (2006).

Sommerfugledalen (Butterfly Valley) (1998/2004) is not only Svend Nielsen's most expansive vocal work; with its 50-minute duration it is in fact his longest work at all. It is a setting of Inger Christensen's sonnet cycle from 1991, one of the most famous Danish poetic works of our time. Inger Christensen (b. 1935) has been proposed several times for the Nobel Prize for her art. Her mature masterpiece, Sommerfugledalen has been analysed innumerable times by literary scholars and enjoys a natural place in the Ministry of Culture's ‘canon' of the twelve most important Danish works of poetry.

The work aroused great attention when it appeared in 1991, and as early as the next year the sonnet cycle was set to music for the first time by the composer Niels Rosing-Schow (this work too has been recorded by Ars Nova Copenhagen). Inger Christensen has appeared many times in readings of the poems, and "Butterfly Valley" has even been the subject of an exhibition of mounted butterflies.

As a sonnet cycle, "Butterfly Valley" has a very strict poetic form. It consists of 14 sonnets, each of 14 lines. The 14 lines are divided into four verse units each; first two quatrains (four lines), then two tercets (three lines). The last line of each of the 14 sonnets is repeated as the first line of the next sonnet. The cycle ‘bites its own tail' inasmuch as the last line of the fourteenth sonnet is identical to the opening line of the first sonnet. As the crowning glory - magically unifying the whole - comes the fifteenth sonnet, called the "master sonnet", where the first lines of all the 14 sonnets together form a final sonnet, which is the culmination and clarification of the whole work.

"Butterfly Valley" has been given the sub-title "A Requiem" by Inger Christensen. In the tightly structured and image-rich sonnet cycle she describes a gradual coming to awareness of the presence of death. From the lively starting-point - a flock of exotic butterflies in the Brajc?ino Valley in Macedonia - the sonnet cycle develops with a forward progress at both the physical and the mental level: from the caterpillar stage of the butterflies to their metamorphosis and their brief winged life, and from the childhood memories of human beings to a sense of the approach of death. But the movements also go in other directions, and the resigned thoughts of mortality that the butterflies set in motion are at the same time contradicted by these delicate creatures' ephemeral but intensely colourful images of life.

Svend Nielsen worked with "Butterfly Valley" for six years. He was given Inger Christen-sen's book by his wife, and soon sensed that he wanted to write a complex vocal work to the text.

The idea appealed to Ars Nova - and without such a virtuoso ensemble at the composer's disposal the work could not have been realized.

In 1998 Svend Nielsen composed the first seven sonnets for Ars Nova's 12 solo singers. Against this background he created a complete version of the whole sonnet cycle for a large choir and symphony orchestra, which was given its first performance in 2003. Then in 2004 he wrote the second half of the 12-part a cappella version on the basis of the version with orchestra.

The very strict structure of the sonnet cycle suits Svend Nielsen well. He has characterized himself as "an atmospherically oriented composer held in check by structure" and adds that his interest in poetic structure has become stronger with the years. "It is risky - and perhaps unnecessary - to put music to another work of art, and especially to one that is sufficient unto itself, as Inger Christensen's "Butterfly Valley" is," says -Svend Nielsen. "But I was captivated, not only by the strict form of the poetic cycle, but also by the richness of its imagery."

The atmospheric sonnets lead to stylistic differences in the movements of the work. Svend Nielsen calls his approach to the poems intuitive, so each poem has been given a specific fundamental mood instead of a point-by-point setting of the incredibly many verbal images: for example, the sonnet that is set among caterpillars and creeping things in a subterranean cave and therefore sounds in dark colours and has the character designation "Slimy"; or the fourth sonnet, which speaks of "all blossoming is rooted in decay" and has the parts closely interlacing in a Ligetiesque style with the movement title "Entangled". And in the eleventh sonnet, where nostalgic visions of a dead father and grandmother lead to dreaming Late Romantic sounds of eternity marked "dolce" and "devotedly".

However, some striking images have direct parallels in the music, for example the swarm of butterflies as gracefully soaring particles of light in the first sonnet, which is set to an ascending theme (one of the central motifs that returns many times in the work). And Inger Christensen's quotation of Brorson's hymn Op, al den ting, som Gud har gjort ("Up, all the world that God has made") in the second sonnet is followed by a musical quotation from the old chorale melody of the hymn.

That "Butterfly Valley" bears the disquieting - and musically charged - subtitle A Requiem becomes clearer in the second half of the work. Svend Nielsen follows Inger Christensen's arrangement which turns the thoughts towards death in the second half's psychological interpretation of the first half's more open perspective. "It all becomes more introverted, cold and bare", says Svend Nielsen. "The thought of death is kept from the door, but prevails in the end: "This is a death that looks through its own eyes / regarding you from wings of butterflies".

Just as Inger Christensen concludes the structure with a "master sonnet", Svend Nielsen, in his formally perfect setting of "Butterfly Valley", ends with a movement that consists of the introductory motifs from the preceding 14 movements.

Svend Nielsen follows the mood of Inger Christensen's inward-looking cycle with a discreet musical idiom and handles vocal effects like whispering, murmuring, speaking and shouting with great economy. "The result is music that is rarely dynamic, and thus has about 50 minutes of inwardness both in the poetic and musical area - a great challenge to the listener, but I hope it is worth the effort," he says himself.

Despite the composer's modest attitude there is no denying that Svend Nielsen's setting of "Butterfly Valley" is a spiritual, sensual and virtuosic tour de force. The extraordinary abilities of Ars Nova have been exploited to compose poetic vocal chamber music that is both grand and incredibly precise - a major work of contemporary Danish music.