Danish Chamber Players, Helene Gjerris
Bo Lundby-Jæger (b. 1964) finds the germ of his chamber music in poetry and in the individual characteristics of the instruments. Poetry is the music's expressive undertone and the texts – often in serious words – give much of the music its specific content. The five works on the CD are music of simple contrasts between new melodies and old forms, between inward calm and pulsating motion, which together produce a succession of original and straightforward musical experiences.
Buy album 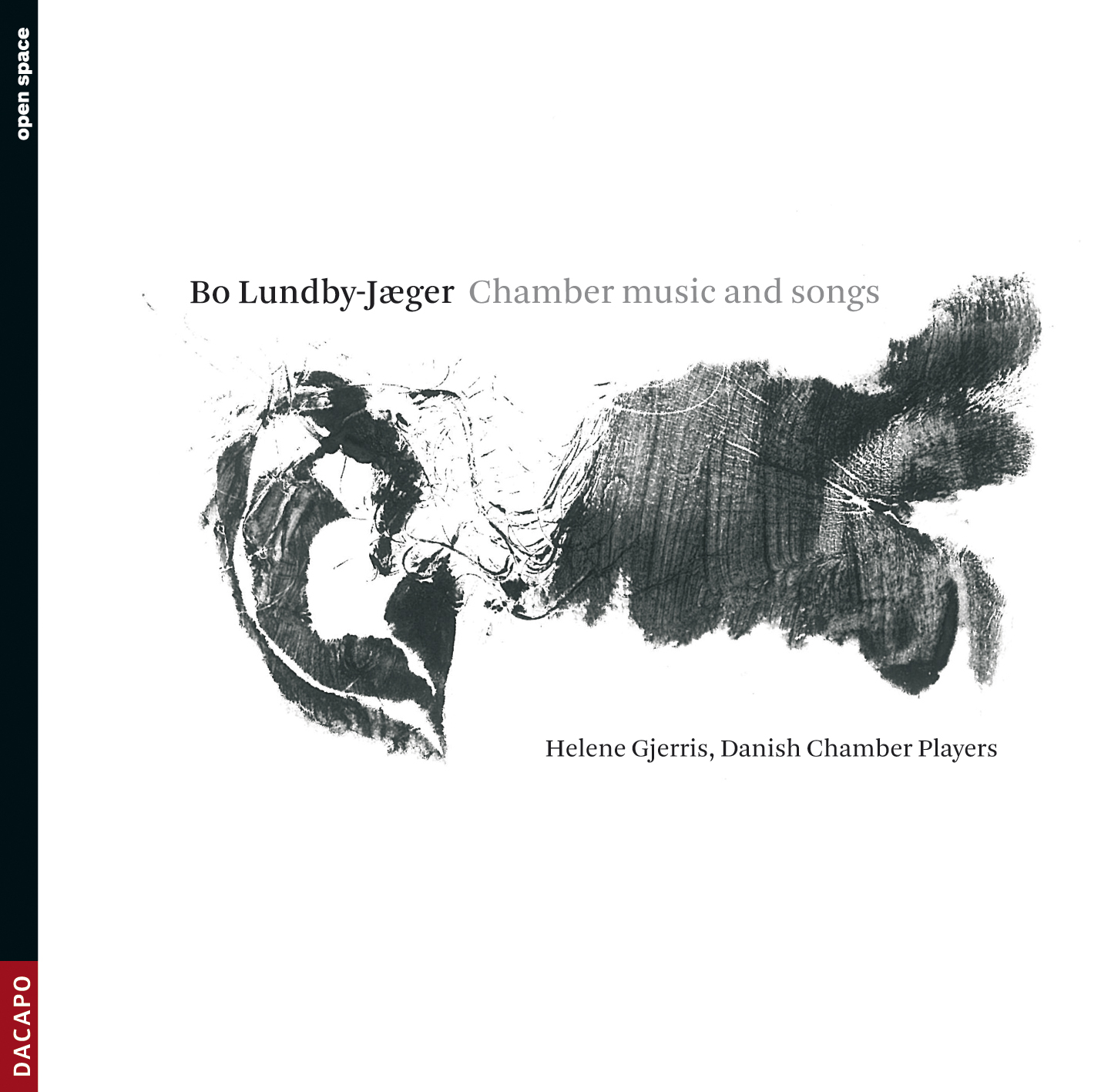 Music can answer the most serious questions of human life. At all events Bo Lundby-Jæger asks some of the biggest of these questions in the texts that are sung on the CD. With the poetic flow of notes, violent eruptions and quiet statements he lets the music speak as a kind of answer.

All five pieces on the CD were written in the course of the past 10-12 years in the time after Lundby-Jæger took his diploma from the Royal Academy as a pianist. Since then the multi-talented Lundby-Jæger has expanded his activities to include composition, conducting and organ-playing, and one immediately senses his far-reaching talents as a performing musician in his own chamber music. The music is not only original and striking; it is also music written to be played by musicians with all their musicianship and their ability to interpret. The music thus exploits the natural sound-potential of the instruments. At the same time it is the pianist Lundby-Jæger who lays the foundations for the bearing elements of the music. The piano is involved at every point and with its virtuoso, challenging motion and its varied sonorities it has the effect of a dynamo that drives the music forward.

Bo Lundby-Jæger builds his chamber music up from a whole range of contrasts - contrasts between words and music, between the instruments that play melodies and those that play aggregated sounds, and between old, well-tried forms and new, expressive melodies. At the same time much of the music unfolds in between the polarities of singing and dancing, between calmly lingering poetry and the aggressive pulse.

In Trio from 1996 for clarinet, cello and piano, the two movements form the two opposites. The first admits the listener to an almost private universe where the music revolves meditatively around some-thing sombre, inward and melancholy. The playing instruction ‘Lento' marks a slow pace, and the musicians perform everything under headings such as ‘quiet', ‘hushed' and ‘hesitant' at volumes from the very faintest to normal. The mood is never heightened; a delicate, tragic beauty fills ‘world number one' in Trio. The second movement is the quite natural contrast - a ‘scherzo' or joke. Here the silence is replaced by dancing over the keys in uncountable rhythms, wild melodic challenges for the clarinet and nothing less than a long cadenza for the cello, an unbridled solo in an updated version of the classic cadenza discipline for virtuosi.

There is something very ‘Romantic' about the trio, in the sense that it recalls music written at the end of the nineteenth century. The tonal idiom is of course quite different with its free treatment of the twelve tones the piano has at its disposal, and rhythmically it is highly varied. But the form, the piano trio, is also classic even though it lacks the quick first movement of nineteenth-century music. And then there is the expansive, sombre panorama that dominates the first slow movement, the Romantic characteristic par excellence.The world must be romanticized,\ cried the Romantic Schlegel, and the slogan reverberates through Lundby-Jæger's music.

In Seven Stages the great contrasts are interwoven among one another as six movements: three old Chinese poems sung by a mezzo-soprano with three instrumental movements wedged in between them for clarinets, lots of percussion and piano, viola and double-bass.

The ‘second stage' is the introduction to the piece. Calm as the morning mood in a forest where the birds wake up while the light increases, the clarinet and piano play small turning melodies. You hear knocking on a wood block, and very faintly you can hear drumbeats as a weak pulse. The tempo picks up, everything begins to purl along and the soprano sings a short, succinct text about life as birth and death - and about all the life that lies beyond one's own. In the third stage the instruments play pulsa-tingly and rhythmically, perhaps as a musical statement about this very speed and motion of life. And so the last four movements too alternate in contrasts: on the one hand the static and reflective, centring on the singer's text, on the other the pulse of the instruments.

Yet it is a life in transition that the instruments represent. While life comes closer and closer to the grave both musically and quite literally in the text, the pulse also comes closer and closer to dissolution. This is evident from the composer's ‘stage directions' to the musicians, and can be heard just as clearly in the music. ‘Degenerate fugue' is the instruction to the performing musicians in the fifth stage - that is, a fugal ‘chase' among the voices as in the music of the Baroque, but a chase that is falling apart. And the seventh stage has been given the playing instruction ‘disintegration or illumination'. That is, something that is separated and non-uniform, but which at the same time enlightens. Perhaps as when the sun breaks through in distinct, filtered beams.

Seven Stages is three sets of musical contrasts, but it is also a little story of development from birth to death, where the last recalls the first dawn of the music. Life as a circle.

Something of the same alternation is presented by Offertorium, but in micro-format. The mezzo-soprano painfully asks her God how much time has been assigned to her on earth. In between the questions and the tough talk about mankind's empty urge to accumulate, the percussion, violin and piano play small passages of a more lively nature. Not that the mood is lightened beyond the grave and melancholy, but there is a clear difference between stasis and motion, between innovation and repetition, between words and abstract music.

An offertorium was originally a place to which sacrifices were brought. In the Christian church the offertory is not only the liturgical offering of bread and wine but also the collection, when the congregation collects offerings for the poor. Lundby-Jæger has selected his text from Psalm 39 in the Bible, in which the psalmodist invokes his God with a fervent heart because it is intolerable not to know when life will end. The uncertainty makes him abandon himself completely to the mercy of God. Perhaps Lundby-Jæger's Offertorium is to be understood such that the greatest sacrifices are often made when one is not certain of the result of the sacrifice?

The last two works on the CD are closely related and yet represent two very different kinds of music. Elements is music with an action played out among the various notes like a closed musical drama, while Three Songs is a kind of tone poem over three poems by Morten Søndergaard and Merete Pryds Helle.

Nevertheless the three movements in Elements for flute and piano function in the same way as the Three Songs for violin and piano. In both pieces, lurking beneath the surface, there is a constant opposition between wild, modern musical movements and lingering, reflective sounds. The pianist Lundby-Jæger emerges in earnest in the first and last parts of both pieces, where the piano is the explosive driving force that again and again sends either the flute or the violin to the outer limits with extreme trills, long glissandi and other alien sounds.

The second movements of the pieces contrast in temperament, tempo and volume with all the wildness. Violin and flute both turn inward with lingering melodies that only slowly move forward. On top of the straightforward narratives of the outer movements, it is as if the two second movements sink into dark poetry without any true destination.

But the two pieces also develop very differently along the way. Most of all because the two melodic instruments are as different as they are, and because Lundby-Jæger exploits the quite special features of the flute and violin as points of departure for writing as he does.

In Elements the flute is the opposite pole of the piano. Although in the last movement the two keep company synchronously and both play around the same moods, the piano has a stability and a focus that the flute does not master. Whatever the conception of the composer, the piano always plays with exactly the 85 notes that the hammers can strike on the strings inside. And when a string has been struck it can never become louder than its initial volume, and one can never really ‘tie' the individual notes. As a contrast to this one has the flute with its unstable, airy sound. The flute can slide effortlessly from its lowest to its highest note and can constantly vary its timbre and volume. The ‘natural' qualities of the instruments are Lundby-Jæger's foundation, and the result is that the flute dances freely and easily across the great swathes of notes that the piano expressively builds up.

The violin in Three Songs can do something quiet different. It can play several notes at a time, and there is never any need to stop and breathe in new air. And then the violin has a naturally poetic, romantic sound which when truly rhythmic recalls folk music and simple dances. Lundby-Jæger deploys the whole arsenal in Three Songs. In the first song with the cryptic subtitle ‘Ikke sandt Leonardo!' (Not so, Leonardo!) the violin takes the lead in long, sustained phrases, while the piano stays more in the background with many shades of colouring. The musical idiom in the next song, entitled ‘I lystens hav' (In the sea of desire') is simpler, more direct and sensual than anything else on the CD. The clear, bright sound of the violin is allowed to shine through like a human voice dreamily singing a heartfelt song. In the last song, ‘Mr. Milgram', the interplay again becomes more pulsating, and in the end goes all the way over to playful, jazzy folk music, when Lundby-Jæger returns again and again in both instruments to a simple rhythmic theme.