Friedrich Kuhlau stands as arranger and composer for the most played piece at the Royal Danish Theater: Elverhøj (Elves' Hill), which also has the status of the Danish national play. It was no obstacle that he was born in Uelzen in northern Germany and thus not a Dane of descent. He knew about the music that was advanced in time, both the newly written operas and the newly released old folk songs. He used both parts extensively as the basis for his compositions in Elverhøj. 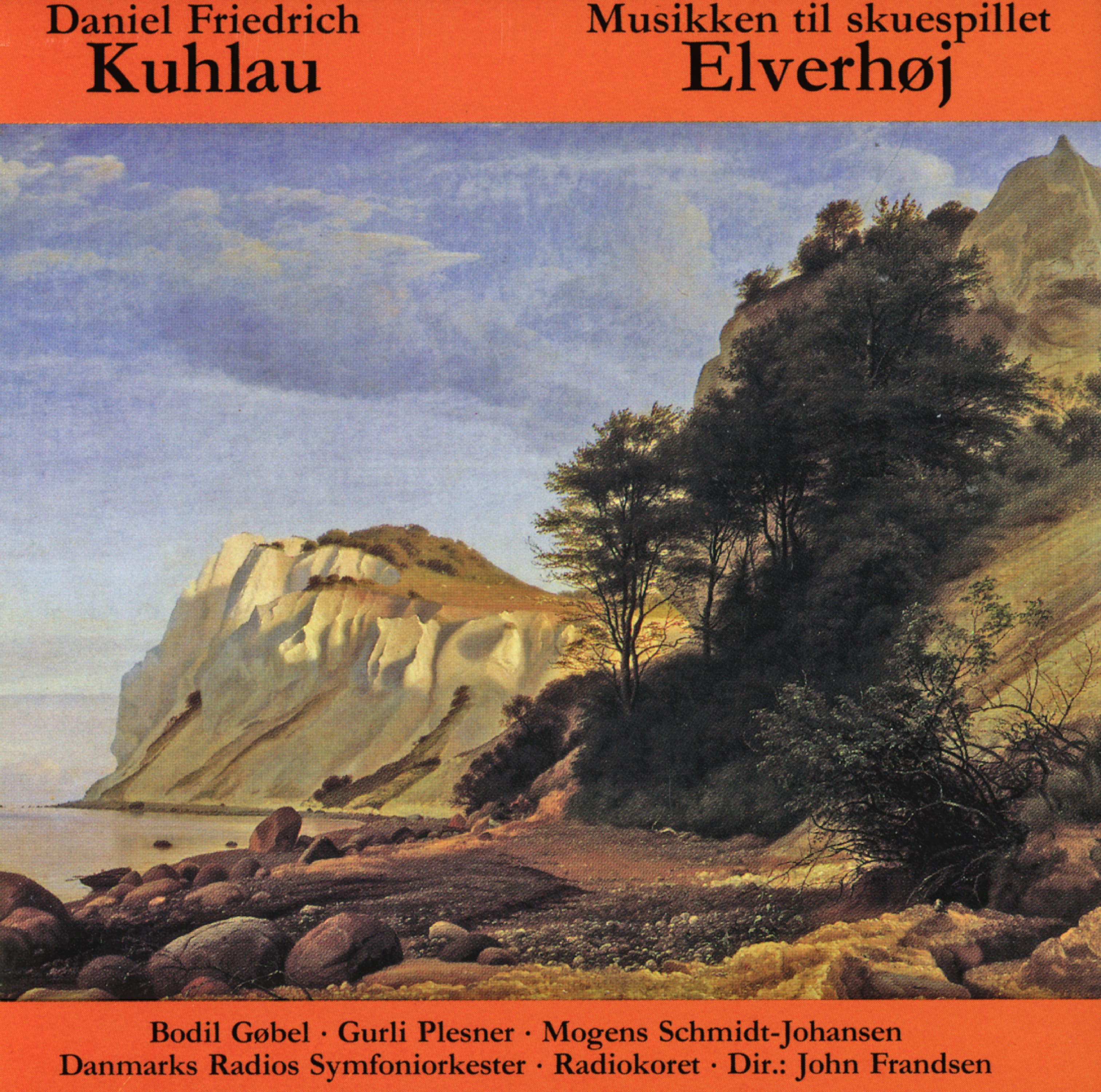 "ELVERHØJ (Elves' Hill). Play in Five Acts by J.L. Heiberg. Set to Music with the Use of Old Danish Folk Tunes, and Most Humbly Dedicated to Their Royal Highnesses Prince Frederik Carl Christian and Princess Wilhelmine Marie by Fr. Kuhlau. Op. 100 " - Such is the elaborate heading on the title page of the piano arrangement published 1829.

The marriage of Frederik VI's younger daughter and the later King Frederik VII was celebrated at the Royal Theatre on November 6, 1829, by this festival play produced in exceptionally happy cooperation between poet and composer. In his draft, Heiberg had aimed at a national-romantic drama, based on folk songs. He states as his sources Nyerup and Rahbek's Folk Tunes from 1814 and P. Gronland's Swedish Folk Songs from 1818. Three years before Heiberg had introduced the vaudeville into Denmark, and the idea behind this was not without impact on Elverhoj - the melodies were well known to a large part of the audience. The play ingeniously combines the three dramatic arts. The speaking, singing, and dancing artists form a happy synthesis - Heiberg keeps a firm hand on action and words.

The musical setting was entrusted to Kuhlau, who had already obtained recognition as a dramatic composer through works like "Røverborgen" and "Lulu". He had a deep knowledge of folk songs and tunes, he used them early, especially in his works for piano and flute. Thus the theme of Elisabeth's romance is varied in the flute sonata op. 64. "King Christian" had already been the subject of two compositions, first the piano variations op. 16, later the rondo "Les Charmes de Copenhague" op. 92, both in an older version. According to tradition, it was Frederik VI's favourite melody, and in "Elverhoj" it is not only given the prominent position as the culmination of the play, but it also acquired its final form. Kuhlau's contribution to the festival play consists of a strangely unfailing treatment of the traditional melodic material which he connects with, and frames in his own compositions. The music is extremely effective, in the best sense of the word, and bears witness of Kuhlau's eminent art of orchestration. In the most natural way, the work reaches its climax in the ballet music of the last act which is immensely colourful and leads up to the grandiose final chorus.

Out of this abundance of melodic material, Kuhlau then created the immortal EIverhøj overture which is in itself a stately and coherent work, grandiosely culminating in the royal anthem. He very likely took inspiration from Weber's ten years older "Jubel Overture", ending in "God Save the King".

Already at the first performance, the work was received with spontaneous enthusiasm, and no other play has been given so many performances at our national theatre - close to one thousand. It might be tempting to look for symbolism in the fact that this work got the opus number 100. With Elverhoj the composer created the most genuinely Danish of his works.

"Elverhøj" (Elves' Hill) was written 1828 for a festival performance in glorification of the wedding of the later King Frederik VII. The musical poet and dramatist J.L. Heiberg selected folk-melodies and planned the setting together with the equally experienced dramatic composer Kuhlau. On November 6, 1828, the celebrational first performance won the immediate enthusiasm of the audience. Since that day the play has retained its unrivalled position as the national festival with its happy and romantic combination of history and folklore, of nobility and peasantry, of love and distress, of words and music. It has reached about 1000 performances at The Royal Theatre.

Act I. During the melodrama [2] the grand old man of Danish royalty Christian IV enters (he reigned 15 88-r648). He finds himself in front of a cottage in which dwells the old peasant woman known as Mother Karen - "a live archive of our old songs of superstition" as she is described. She sings the two first songs [3 and 4]. The king and his suite are on their way to a betrothal at the manor known as Højstrup - which according to local tradition happens to be situated within the domain of the King of Elves. As they set out for Højstrup the peasantry sings [5].

In act Il the nobel bride-to-be sings the following two romances [6 and 7].

Act III is opened by the hunter Mogens [8]. The peasants join in the refrain, and Mogens goes on saying "Let the dance begin". The dance music is supplied by Mother Karen 19]. The passing nobleman is greeted by the peasants [10] ' and the courtiers en route to the celebration perform the hunters' chorus [11].

Act IV. The maiden Agnete is asleep at the foot of the Elf Hill. Around her, the elf maids perform the ballet "Agnete's Dream" [12].

Act V. The curtain rises on the festival ball at the manor. The ballet consists of Menuetto, Contredanse, Polonaise, Infants' Dance, Pas de huit, Ecossaise, and Garland Dance [13-19], which is interrupted by the hunters announcing the arrival of King Christian. The whole cast joins in the final royal anthem [2 I] - which was given its definite form and mission when it was included in the "Elverhøj".