This is a story about a struggle for power in old Denmark, and a magnificent opera about events which led to the murder of King Erik Clipping in 1286. To present this dramatic episode from Danish history, a power play rooted in love, jealousy and honour, Heise composed gripping music with a razor-sharp dramatic sense and great lyrical beauty. It is Danish romance at its most powerful and immediate, recorded live. 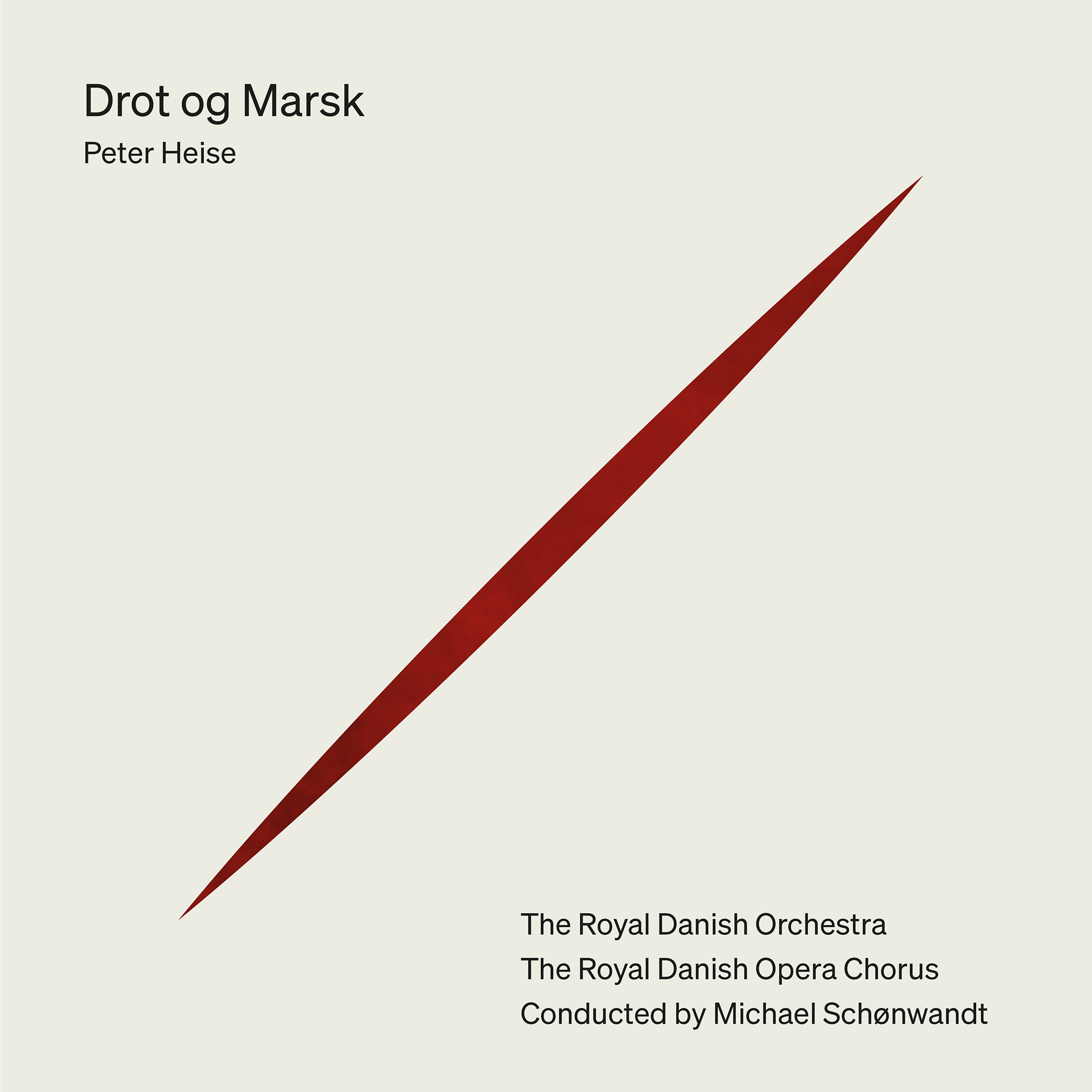 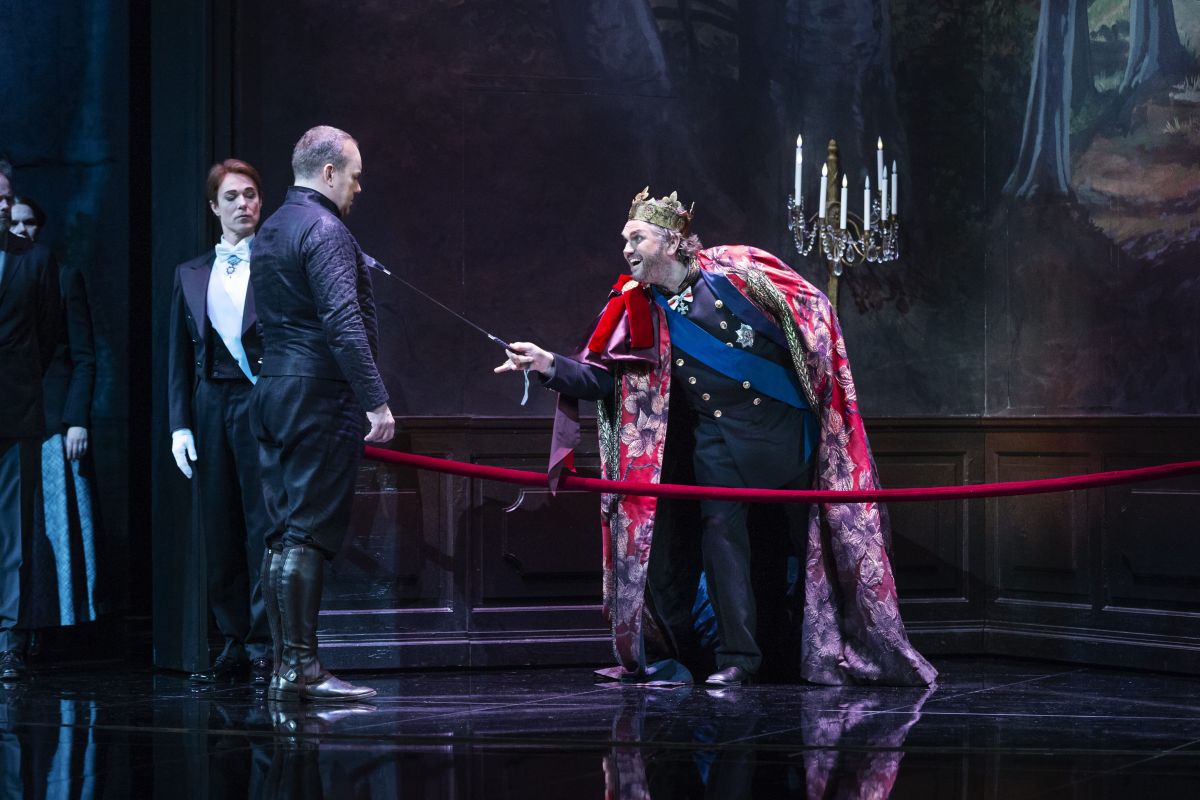 A regicide on the national scene

On 22 November 1286, a Danish king was murdered in a barn near a little country town south west of Viborg. Was it revenge for a rape, or a politically motivated killing? Or perhaps both? The king was called Erik, nicknamed ‘Klipping’ (a reference to fraudsters who clipped the edge off precious-metal coins). He was around 37 years old, and when he was found in Finderup Barn, he had been stabbed 56 times. The king’s military ‘right-hand man’, Marshal Stig Andersen, and eight other great men were adjudged to be outlaws for their part in the killing, and fled to Norway. But was it actually them who stood behind the latest murder of a monarch in Danish history?

The story was certainly a ready source of inspiration for both poets and painters: B.S. Ingemann tackled the story in his 1828 historic novel, The Childhood of King Erik Menved, and Adam Oehlenschläger wrote his tragedy, Erik Glipping, in 1844. The best known version of the story today is Otto Bache’s painting of c.1880‑82, showing the conspirators coming away from the burning barn in Finderup. During the nineteenth century it was primarily the account of how the king behaved towards Stig Andersen’s wife Ingeborg which was of greatest interest, and a proper murder to avenge a rape made a better story than a complicated explanation of political influence and rivalry between nobles.

In 1850, the 20 year old composition student Peter Heise saw a performance of Carsten Hauch’s tragedy, Marsk Stig (Marshal Stig) at the Royal Danish Theatre. Heise remembered the experience for 25 years before he began work on his own operatic version of the story. By that time, he had made his name as his generation’s most successful composer of romances in Denmark, but he had yet to establish a reputation as a composer of opera.

Peter Heise started playing the piano at the age of 12, and began to study music theory with the composer A.P. Bergreen after graduating from high school. He supplemented his music education with a year of study in Leipzig, and on his return home to Copenhagen in 1853 he began to teach music. He became assistant conductor of Studentersangforeningen (The Students’ Singing Society), and in 1857 he secured a good safe job as organist and music teacher at Sorø Academy. He wrote romances, especially, at first under the influence of C.E.F. Weyse and then of Niels W. Gade, but gradually he began to stretch himself with larger compositions for soloists, choir and orchestra.

It wasn’t long before Heise no longer needed a secure job, but was able to employ all his time in composition: he married Vilhemine Hage, daughter of a rich merchant when he was 29. From then he was able to work as he wished, without worrying about scraping pennies together to pay his rent. He left his job at Sorø Academy in 1865, and the family moved back to Copenhagen.

One of the projects which Heise worked on for many years was a singspiel called Paschaens datter (The Pascha’s Daughter), with a text by Henrik Hertz. Heise had started work on it before leaving for Sorø, but now that he had returned to Copenhagen it was time to finish the work. He submitted the piece for acceptance at the Royal Danish Theatre, but it lay untouched there for several years until finally receiving its first performance in September 1869. Even though it had a polite and kind reception at its première, the opera was one of the many which had only a short life on the stage.

But Heise did not give up the idea of writing operas. He had written a concert overture called Marshal Stig back in 1856, and knew that the story of a king’s murder had operatic potential. He asked his sister-in-law, Elise Ploug, married to the author Carl Ploug, to prepare a substantial synopsis of fifteen pages, and then asked his good friend, the poet Christian Richardt, to look at Elise Ploug’s draft as well as Carsten Haug’s Marshal Stig and the old folk-ballads about King Erik’s murder with a view to preparing a full libretto.

Christian Richardt kept a careful account of the time he spent working on the project: 100 hours during the period from 22 August until 31 October 1875. He sent the text of Drot og Marsk (King and Marshal) to the Royal Danish Theatre, and it took the theatre’s censor, Christian Molbech, only six days to respond: ‘that the piece, besides its special aptitude for musical setting, is a lovely poem in which a homely tone of speech with the sound of folk ballads is successfully struck and carried through, giving it a naturally heightened value, also for the composer’.

The text was accepted by the Royal Danish Theatre, and Heise was able to get on with composing the opera. He re-used the concert overture Marshal Stig, written 22 years earlier, in a version that was shortened for the new opera. During their work on the project, Heise and Richardt carried out a number of small changes in the libretto, but on 21 January 1877, Christian Richardt made a note that the work on the text was complete. At that point, Heise had finished work on the first two acts of the opera, and in October he was able to deliver the finished score of all four acts for approval by the theatre’s chapel master, H.S. Paulli. Paulli noted that, ‘there can be no hindrance in this music’s acceptance for performance at the Royal Danish Theatre’.

Now a little gremlin got into the machinery: Heise had two of the theatre’s singers in mind when he wrote the main men’s roles, the king and the marshal. The 47 year old Jens Nyrop had sung the main part of Selim in The Pascha’s Daughter in 1869. He looked good on the stage and still had a lovely tenor voice, even if he lacked the crucial top notes. The baritone Niels Juel Simonsen, only 32, was to sing the part of Marshal Stig, but when the self-conscious Nyrop realised that he, as King Erik, would be murdered on stage by the young Simonsen’s Marshal Stig, he was absolutely staggered. Jens Nyrop would certainly not allow himself to be killed on the stage by a much younger singer, and he categorically refused to sing the part. It wasn’t easy to find a solution but it was decided that the king’s part would be given instead to the actor, Emil Poulsen.

70 years earlier it had been a rarity for there to be a division between actors and singers at the Royal Danish Theatre; at that time it was entirely ordinary for a stage artist to both sing Mozart and play Holberg. Even if times had changed, with a gradual professionalising of the roles of actors and singers through the nineteenth century, there was still no watertight division between their respective functions by 1878. Emil Poulsen had a comfortable singing voice, but it was necessary for Heise to rewrite his part using lower notes: Poulsen could not manage the higher notes Heise had planned for Nyrop, even though he had already made allowances for the older man’s limitations.

Heise was directly involved in the preparation and rehearsals for the production during September 1878. Each day that passed, he got keener and keener ‘because we make such progress. I think we have been blessed with happiness in the early rehearsals, and everyone can be seen to be engaged and interested in the work on their respective roles.’

Expectations of the new work were sky high. Christian Richardt’s libretto was already in the shops six months before the first performance, and Nationaltidende’s (The National Times) review of the first performance included a discussion of the text: ‘As a poem, King and Marshal is not only a piece of especially important poetry, but also an expressive lyric-dramatic work, and the public have already given their judgement, as the second stock of the text was already printed before the performance, before a note of the music was known, which is probably a unique rarity in the history of opera texts’. The day after, in the same newspaper and after their reviewer had been to the first performance, a few more lines appeared, saying that the work more closely resembled ‘a study than a fully finished masterpiece’.

There are several things that were new for both the public and for reviewers. In contrast to the clear division of the musical numbers that the Copenhagen public were used to, for example in Heise’s own earlier singspiel The Pascha’s Daughter, King and Marshal has no great self-standing arias, rather a steady stream of scenes, where the dramatic structure directs the form. The orchestra was no longer just to accompany; it takes a full part in creating the drama's momentum. Even though Heise himself was certainly not a fan of Wagner’s works, it is clear that he was influenced by recent developments in operas from Germany, Italy and France.

Even if the public responded well to the opera at the first performance on 25 September 1878, the reviewers were more divided. Some thought that there were too few big ensemble scenes, and that the solo parts weren’t virtuosic enough. Others pointed out that the story ought to have been presented with more historical facts, and suggested that it lacked the necessary dramatic cohesion. One of the reviewers declared that the king’s relationship to Ingeborg, whether she was raped or deceived, was not presented in enough detail, because ‘the decisive offence has such an intimate character that one must necessarily be content with insinuations and discussion’: what was clearly a rape in the folk-ballads, was ‘lost in dramatic respects, so that the moral situation became unclear’.

This shows that it had been a lucky decision by the management to have Emil Poulsen sing the role of King Erik even though he struggled to keep up with the rest of the team in vocal terms; his portrayal of the king was described in the press as one of the finest elements at the première, and most people thought he carried the performance.

There is no doubt that many saw King and Marshal as a good step on Heise’s way towards becoming a great Danish opera composer; but Heise died only a year after the opera’s first performance, and he never had the chance to show what he had learned from working on this attempt at a Danish national opera.

Despite the views of the reviewers quoted above, King and Marshal has remained in the repertoire of the Royal Danish Theatre to this day, even if there are longer gaps between groups of performances now: in 1922 the opera was performed at the Royal Danish Theatre for the 100th time, and in 1906 it was performed three times at the opera in Stuttgart. In1974 the number of performances at the Royal Danish Theatre (Old Stage) reached 184, and there were two concert performances at the Concert Hall in Tivoli Gardens in 1983. The opera was presented by the Danish National Opera in Aarhus in 1984 and again in the season 2000/2001, and in 1988 the opera was produced for television. In 2019 King and Marshal was played for the first time on the stage at the Royal Opera House on Holmen in Copenhagen, directed by Amy Lane and Kasper Holten, and conducted by Michael Schønwandt, caught on the live recording presented here.

This box set has been released in cooperation with DR (Danish Broadcasting Corporation) and the Royal Danish Theatre, www.kglteater.dk