Pelle Gudmundsen-Holmgreen (b. 1932) is one of the leading Scandinavian composers, an outstanding and insistent voice from the generation born in the inter-war years. This CD is the culmination of the composer's unique collaboration with the world-famous American Kronos Quartet, which has been commissioning specially tailored works from the Danish composer for over 20 years. 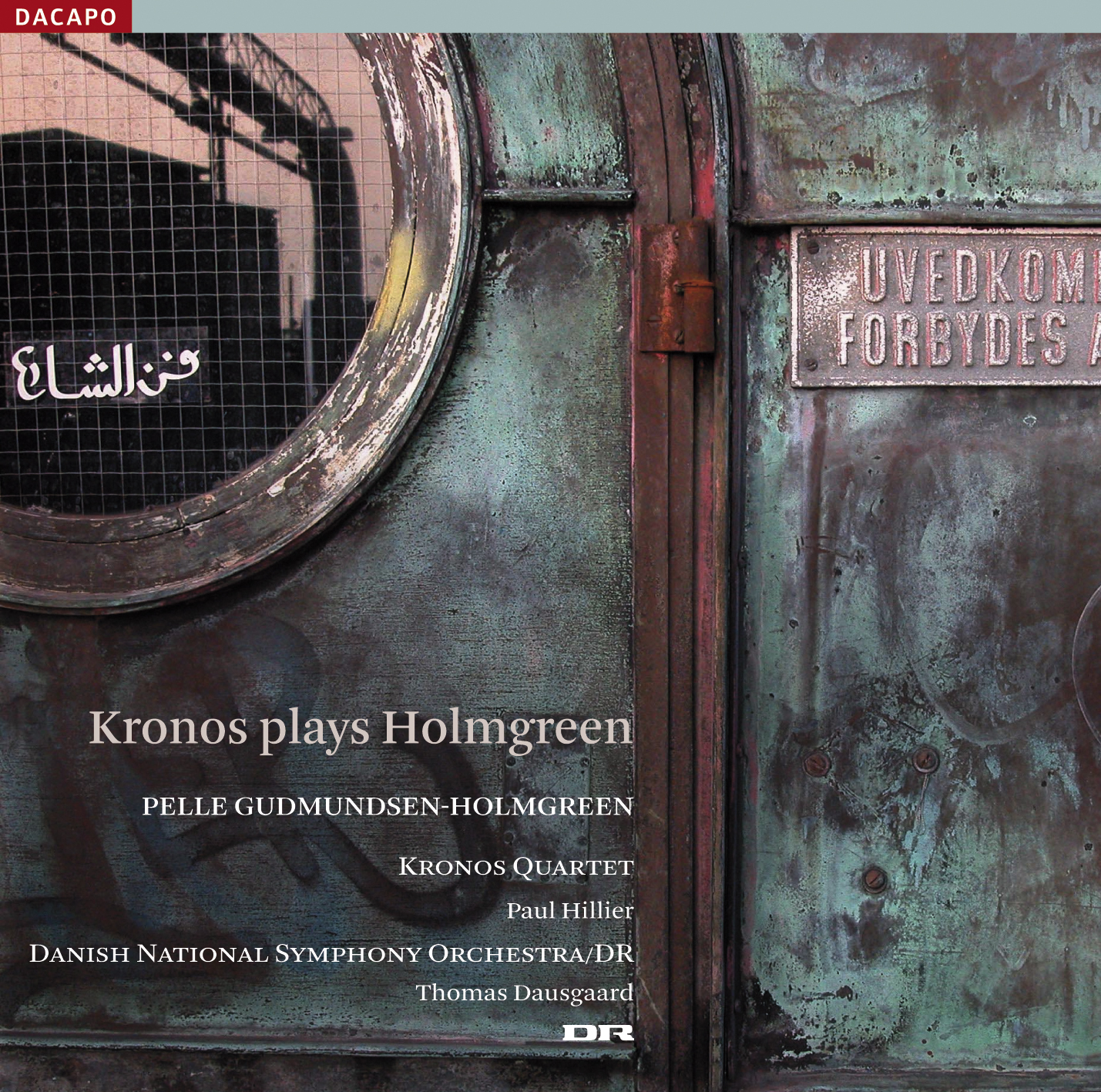 Pelle Gudmundsen-Holmgreen is one of the leading composers of the past century in the Nordic countries, a unique voice from the generation born in the inter-war years.

In his early works Gudmundsen-Holmgreen's music took its cue from heroes like Bartók and Stravinsky. Around 1960 he embarked on a phase where he was influenced by post-war serialism. He renounced this path a few years later and instead became a pace-setter in the New Simplicity\\, as it was called in Denmark: laconic, simplified music which in Gudmundsen-Holmgreen's hands can become provocatively absurd. Often it exhibits a striking pessimism and black humour influenced by the Irish writer Samuel Beckett. Childlike wonder meets cynical comment, clichés meet originality, the ecstatic is united with the ascetic - Pelle Gudmundsen-Holmgreen's music is full of such clashes, never gathering any moss, often entertaining, always uncompromising.

He has mainly composed orchestral music, choral music and chamber and solo works. Two of the works on this CD (Concerto Grosso, in the 2006 version, and Last Ground) had their first performances in 2007 at one of two gala concerts to mark Pelle Gudmundsen-Holmgreen's 75th birthday; an evening that once more proved that this composer is ageless and - as he puts it himself - \\still surprised at what goes on outside one's window.\\

Moving Still - H.C. Andersen 200 is one of the works that were commissioned by the project Symphonic Fairytales for the celebrations of the Hans Christian Andersen bicentenary in 2005.

On the basis of this sacrosanct icon of the Danish cultural heritage, Gudmundsen-Holm-green questions the normal definition of Danishness in Moving Still. At the same time the piece is a tribute to Andersen, who in Gudmundsen-Holmgreen's words has been \\a natural (as well as a strange) part of one's upbringing.\\ In particular he emphasizes Andersen's verbal rhythms. \\After long imaginative garlands of words - a stab. A short, dry, sarcastic comment. A luxuriant wealth of detail and sensibility followed by laconic irony. I think this ‘manner' has become part of my own musical mode of expression.\\

Moving Still is in two movements: an American and a Danish one. The starting-point for this encounter is Hans Christian Andersen's little prescient text In a Thousand Years. This is a Jules Verne-like futuristic fantasy about how Americans will one day be able to fly over the Atlantic and \\do Europe in a week\\. Not a bad guess from Hans Christian Andersen - he only got the timescale wrong. Andersen's American vision has inspired Gudmundsen-Holmgreen to write a nervous, pulsating first movement with a nod to American minimalism. He emphasizes himself that the Americans Ives, Varèse, Cage and the minimalists from his own generation have had a crucial influence on him. And then too the Kronos Quartet is precisely an example of energetic Americans who come flying over for a series of splash-downs in Europe.

In the American first movement the whole of Andersen's text is recited - in English. The accompaniment consists of a taped track where the soloist makes three layers of syncopated mouth music that reinforces the quartet's agitated pulsation and transport rhythms. Against this dynamic movement (\\Moving\\) stands an apparently static and thoroughly peaceful second movement (\\Still\\), a portrait of \\the Old World\\. Here Gudmundsen-Holmgreen uses Hans Christian Andersen's patriotic poem I Danmark er jeg født (In Denmark I Was Born) with ironic sophistication. The beautiful verses are Denmark's unofficial national song (many wish it was the official one), and over time the poem has used various melodies. The most common one today is the ascetic melody by the Carl Nielsen pupil Poul Schierbeck, but in the past a more romantic melody by Henrik Rung was used. Both have left their marks on the melody that Gudmundsen-Holm-green himself has written and uses in the second movement.

\\My melody ends on a gently questioning rather than a bombastic note, thereby in a way putting a question mark after all of it,\\ says Gudmundsen-Holmgreen. But that is not all. An interlude in boogie-woogie style breaks the stasis, and gradually the melody begins to mutate in the direction of Arab music.

\\We live at a time when Danishness has become a theme that arouses malaise and claustrophobia. I wanted to draw attention rather rudely to the fact that Danishness is not an immutable entity, but is coloured by innumerable influences from the outside.\\

It is a special point that Moving Still was written for the English singer and conductor Paul Hillier, who now lives in Denmark. \\He speaks Danish rather well,\\ says Gudmundsen-Holmgreen, \\but his English accent can't be denied and this sheds a wry light on the perception of Danishness as something you can only acquire when you're a 100% native Dane.\\

Pelle Gudmundsen-Holmgreen's Ninth String Quartet Last Ground is dedicated to the Kronos Quartet. The work was written in 2006 and includes manipulated recordings of sea sounds. \\I spend much of my time on the island of Samsø, close to the sea,\\ Pelle Gudmundsen-Holmgreen says. \\In Last Ground it is the violent aspect of the sea I was thinking about. I think it is quite wonderful.\\

The work begins with the sea, which is allowed to fill the whole of the first two minutes. However, a few herring gulls and terns are also allowed to flit into the background. When the string quartet begins to play, the sea is filtered into a small sequence of chords that is repeated throughout the piece, alternately non-inverted and inverted. (The principle of repeating a particular chord sequence or a particular bass line is called a \\ground\\ in English. Other words for the same principle are \\passacaglia\\ or \\chaconne\\.)

The note D is the fixed point in Last Ground, and in the course of the piece the note A flat is kept out of the music until the very end, when the A flat sounds along with the D and forms the interval of the tritone. Even in the sea sounds that end the piece by flooding out the quartet completely.

\\In the face of the roaring, raging sea the quartet is a puny little thing. It's very faint-hearted,\\ says Gudmundsen-Holmgreen. \\Gradually it gets slower and weaker. What starts as a pale, puny little thing gets even paler!\\

And the title Last Ground is to be taken literally: \\After all I'm an old codger and I don't know how many more grounds I'll manage to make. This is maybe the last one. A farewell to the string quartet and to more than that. And so you think about what sort of life you've lived. Well, it's a puny little life, a puff of breath in the reeds, surrounded by this great roar! A whispering string quartet - and then washed away by the storm flood. The violence can have a liberating effect. As a storm can. As a roaring sea can. And we shrink away. From little to less.\\

Concerto Grosso is one of Pelle Gudmundsen-Holmgreen's biggest works, both in size and status.

In the work Gudmundsen-Holmgreen draws in several ways on the historical concerto grosso genre from the Baroque, where various instruments or instrument groups emerge from the crowd and play with and against the orchestra. In Pelle Gudmundsen-Holmgreen's Concerto Grosso there are many reminders of Baroque music, some used soberly, others as clichés.

But there is certainly also much in the work that is not from the Baroque. In fact there is a lot in the music that is ‘baroque' in the original sense of the word - i.e. decidedly odd! \\Vivaldi on safari\\ is one of the composer's graphic descriptions of this meeting in the jungle between traditions and their -opposites. \\What I'm looking for is a filtering of the familiar. The familiar seen through a prism,\\ says Gudmundsen-Holmgreen.

Concerto Grosso develops in one long stretch without pauses. The orchestra is expanded with a large selection of percussion, but on the other hand has had all its strings removed except for two double-basses. The orchestra is set up in a ring around the four quartet soloists, and parts of this surrounding ring enter into various configurations that are crucial to the development of the work. In the composer's own words his Concerto Grosso becomes \\a flow with a number of situations where the string quartet is set up against different soundscapes.\\ It forms a set of contrasting \\movements\\ in the long, unbroken sequence so that the work in fact takes on the character of another Baroque genre, the suite, with its kaleidoscopic array of rhythms and characters.

Pelle Gudmundsen-Holmgreen's Concerto Grosso was given its first performance in 1990 by the Kronos Quartet. In 1995 came the first revised version (recorded on Dacapo 8.224060). The version on this CD was made in 2006.

\\I often write music that can't make up its mind, and that's deliberate. But there are limits!\\ Gudmundsen-Holmgreen explains. \\In my old age I've become more interested in transparency, and the Concerto Grosso was a pretty heavy, turgid thing. Which it still is! - but moderated in a favourable direction. In fact I should revise several of my pieces.\\

This CD has been recorded in cooperation with the Danish Broadcasting Corporation.