Helene Gjerris, LINensemble
Jørgen Plaetner (1930-2002) is known as a pioneer of early electronic music, but he also wrote a number of remarkable works for acoustic instruments. Plaetner composed the chamber works and songs on on this CD late in life as an expatriate in Sweden. The works testify to a humanist, pacifist artist with strong roots in the inter-war years, and there is food for thought in both words and music.
Buy album 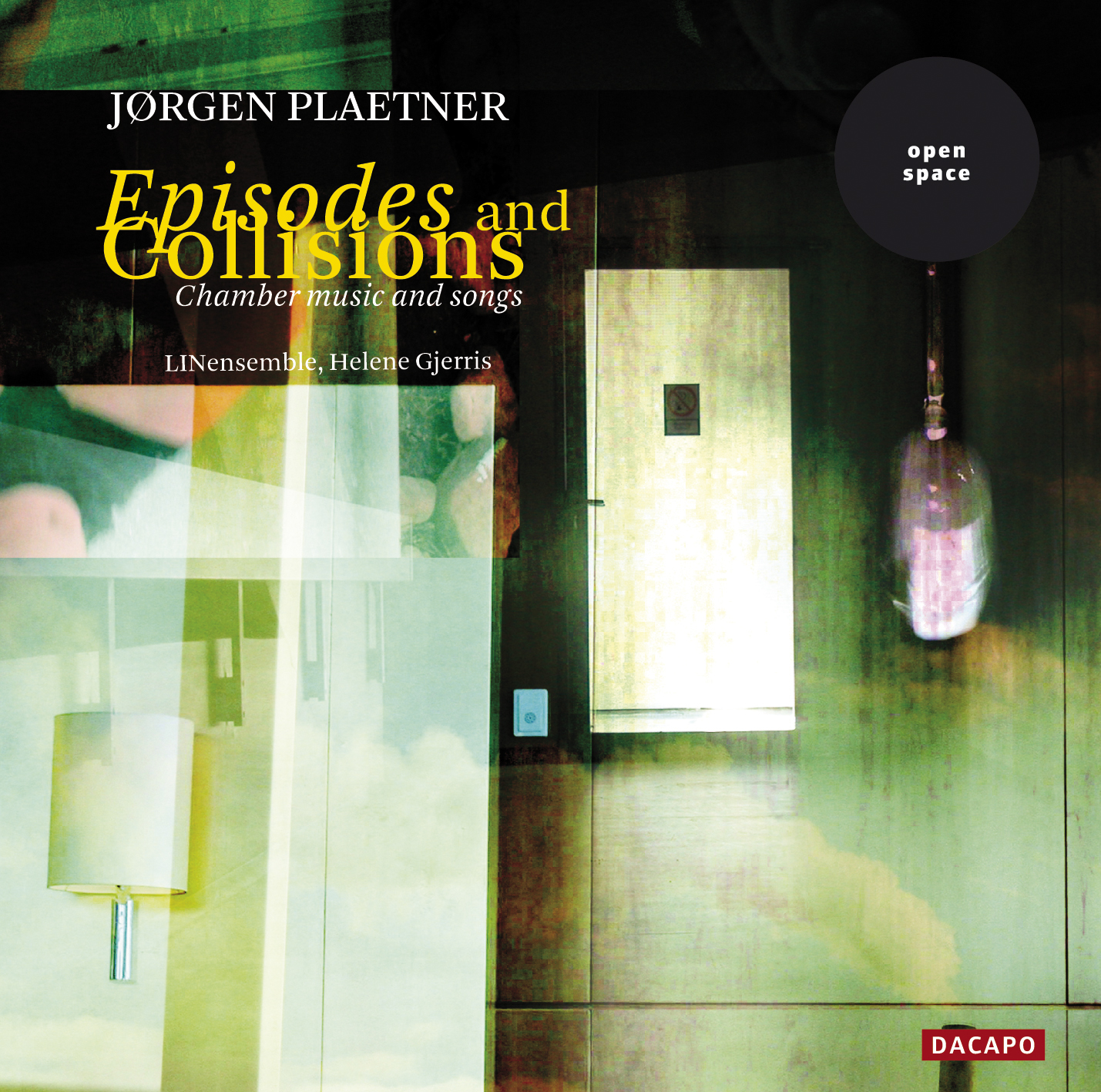 The composer Jørgen Plaetner (1930-2002) is well known as one of Scandinavia's electronic music pioneers. His electronic works from the 1960s remain among the most original of their kind. However, Plaetner also has a more traditional side and wrote a large number of acoustic works.

Jørgen Plaetner's career began in a relatively ordinary way for a composer of his generation. He was born in Copenhagen, played piano as a boy and at the age of 19 was admitted to the Royal Danish Academy of Music in Copenhagen. There he studied composition and music theory with the composers Vagn Holmboe, Niels Viggo Bentzon and Bjørn Hjelmborg as well as organ with P.S. Rung-Keller. Holmboe and Bentzon can be said to have been Denmark's leading composers at that time, but they were very different. Plaetner found the polarities interesting - Holmboe was rigorous and simple\, Bentzon was \\the intense driving force\\.

Jørgen Plaetner was already then aware that experiments were being done with electronic music on the Continent, and at the age of 20 he was the first Dane ever to participate in the famous holiday courses for contemporary music in Darmstadt. He went back there twice later, and he attended the first performances of Stockhausen's Gesang der Jünglinge and Kontakte. This had an intense effect on Plaetner, who began to build up his own electronic music studio in Kalundborg, far from the nearest colleague.

Jørgen Plaetner was an enthusiastic music teacher and in 1957 he took up a teaching post at the State School for the Blind. In 1967 he took up an even more unusual position in Holstebro as the country's first ‘town composer'. Plaetner was a firebrand and the post was established on his own initiative. In Holstebro he established a council music school for children, wrote music for the local ensembles and even set up a local electronic music studio. The time was ripe for such culturally visionary social projects, and Plaetner was very interested in getting art out into the local community. His teaching principles were inspired by Carl Orff and Bartók, and introduced the pupils to contemporary music at an early age. But after a while the city council wanted more quantifiable and prestigious results, and in 7 there was a rupture between the town composer and the town - and, it was to turn out, between Plaetner and electronic music.

In 1979 Plaetner moved with his wife to the small town of Kårahult in Sweden. They had an old dream of living in the countryside and did not think they were missing anything by abandoning the uncomprehending Danish music scene. Plaetner lived in Sweden for the rest of his life. For some years, though, he went to Denmark weekly to give children ear training and composition lessons at the council music school in Birkerød!

When Plaetner died at the age of 72 in Växjö, his works were gradually being forgotten in Denmark. However, modern computer-music circles did manage to make contact with the old pioneer before he died, and a year after his death, when Dacapo released a CD with a selection of his electronic music works from the 1960s and 1970s (Dacapo 8.226511), this gave Plaetner a posthumous breakthrough both in Denmark and abroad.

The originality of the electronic works has completely overshadowed the compositions Plaetner wrote for acoustic instruments. These included chamber works, vocal music, theatre music and eight piano sonatas. In particular the late works he wrote in Sweden are more or less unknown in Denmark, for as a rule they were only performed at events with the Swedish composers' group Media Artes, of which Plaetner was a member. On Plaetner's death his pupil Hans Peter Stubbe Teglbjærg wrote of this situation:

\\In Media Artes he found the group of colleagues he had sought earlier. Within the framework of this group his last creative period blossomed, and we in Denmark have in many ways yet to hear the results. How well are the late works from his Swedish period known in this country? One cannot overestimate the importance of music being released - properly and in due time - irrespective of what one might think about it. One may doubt whether the over-cultivation of some of his contemporaries is healthy for a varied picture of Danish music.\\

One of the big chamber works from Plaetner's late period is the trio Episodes and Collisions. It was written in 1996 for LINensemble with its combination of clarinet, cello and piano. Jørgen Plaetner himself sent it out with a few discreet words: \\In my view a title should exclusively whet the appetite - not serve as a pre-masticated, dissected and fully-moulded view of the work and thus spoil the experience before the work has had any chance at all to make its impact. On the other hand the ‘heading' must be clear and indicate the direction of the experience. So as regards the trio Episodes and Collisions I will simply mention that it consists of two movements which are however played continuously. The episodes and collisions that occur and the way they come to expression I will leave to the listener.\\

Without spoiling Plaetner's approach, though, one can probably get a little closer to the work with words. The two movements do not represent the ‘episodes' and ‘collisions' respectively; the work simply consists of various episodes that collide, and thus it is rather like a rhapsody. In reality it is probably eastern European folk music that forms its basis - filtered through Bartók and Plaetner's teacher Vagn Holmboe, who was a great connoisseur of eastern European music.

The first movement begins like a ‘Hungarian rhapsody' with a slow, prelude-like introduction that has the effect of a collective folk music improvisation. The first quick section starts with unison voices and a fast, chopping rhythm, and after that the movement alternates continually between fast and slow sections.

After a beautiful, dreaming passage the music proceeds without a break to the second movement, which is to be played \\ben ritmico\\, very rhythmically. The movement is in shifting times, mainly quintuple and septuple, and there are many sharp edges to the melodic material. Just as one thinks the music is to be allowed to fall into delicate nuances towards the end, it has a final spasm, the rhythmic figure from the beginning of the movement.

In the even later Sonata for clarinet and piano (2000-2001) one hears the clarinet as if torn between the frantic, the touching and the wounded - an instrumental ‘reading' that goes all the way back to Carl Nielsen's Clarinet Concerto from 1928. Plaetner's clarinet sonata is one of his last works. He died the year after it was completed, and he never managed to hear it himself. This recording is in fact the sonata's first performance.

The sonata falls into three large movements, and in between Plaetner inserts small interludes. The clarinet is fully active from the beginning and plays long, pointed arabesques with lunges to right and left. The second movement consists of two mini-interludes for piano. The two sections have the same theme: in the first interlude one hears the motif in its pure form, and in the subsequent version an ornamented double as in French Baroque music.

The third movement is begun by the clarinet alone with a cadenza-like monologue. The piano makes its entry and the movement develops into a dramatic conversation where no punches are pulled.

The fourth movement is a meditative interlude, this time for both instruments, before the witty fifth movement starts. There the two instruments allow each other to unleash eccentric behaviour and they keep company on an equal footing until the piano sees off the clarinet at the end. The recurrent triplet figures of the sonata fall apart and the music dies out in high, repeated notes.

\\Plaetner's literary interest grew over the years to become voracious,\\ says Hans Peter Stubbe Teglbjærg. \\Every day he read for several hours, often in the very early morning, and the subjects of the books on the eternally growing metres of shelves were many: fiction, history, politics, philosophy, with poetry perhaps as the most important. His heart beat for the art of poetry. While over his more than fifty active years he set a wide range of text types, poetry came to take pride of place.\\

Plaetner's songs to Swedish texts by Stig Dagerman also show his interest in politics. From 1943 until his suicide in 1954 Stig Dagerman wrote down his daily observations in the form of ‘diary leaves' that were printed in the left-wing Swedish newspaper Arbetaren. Plaetner came across the little texts when they appeared in book form in 1983. They became shrewd, ironic aphorisms on the meaninglessness of war. In Toyland goes in a skewed march tempo and Little Lasse - Model 44 is a grim pastiche of a well known Swedish children's song.

Four Danish songs exemplify how Plaetner carried on the Danish tradition of lyrical songs in a succinct form. Little Human has a text by the well loved poet, Halfdan Rasmussen, another pacifist, and the other three songs demonstrate Plaetner's broad orientation in the Danish poetry of the twentieth century, from the Symbolist Sophus Claussen to two of the best known poets of our own time, Arne Herløv Petersen and Pia Tafdrup.