A fall from the perfect ground

A fall from the perfect ground

Ensemble Alternance, Helene Gjerris, Marie Kobayashi
In recent years the French elite ensemble Alternance has worked closely with a succession of Danish composers. There is a whole generation between the youngest and the oldest composer – yet this release clearly shows a shared spirit in the work with beautiful new sounds. All five works were written after the turn of the millennium and in that sense offer a completely up-to-date picture of Danish composition music in a wide spectrum of sonorities.
Buy album 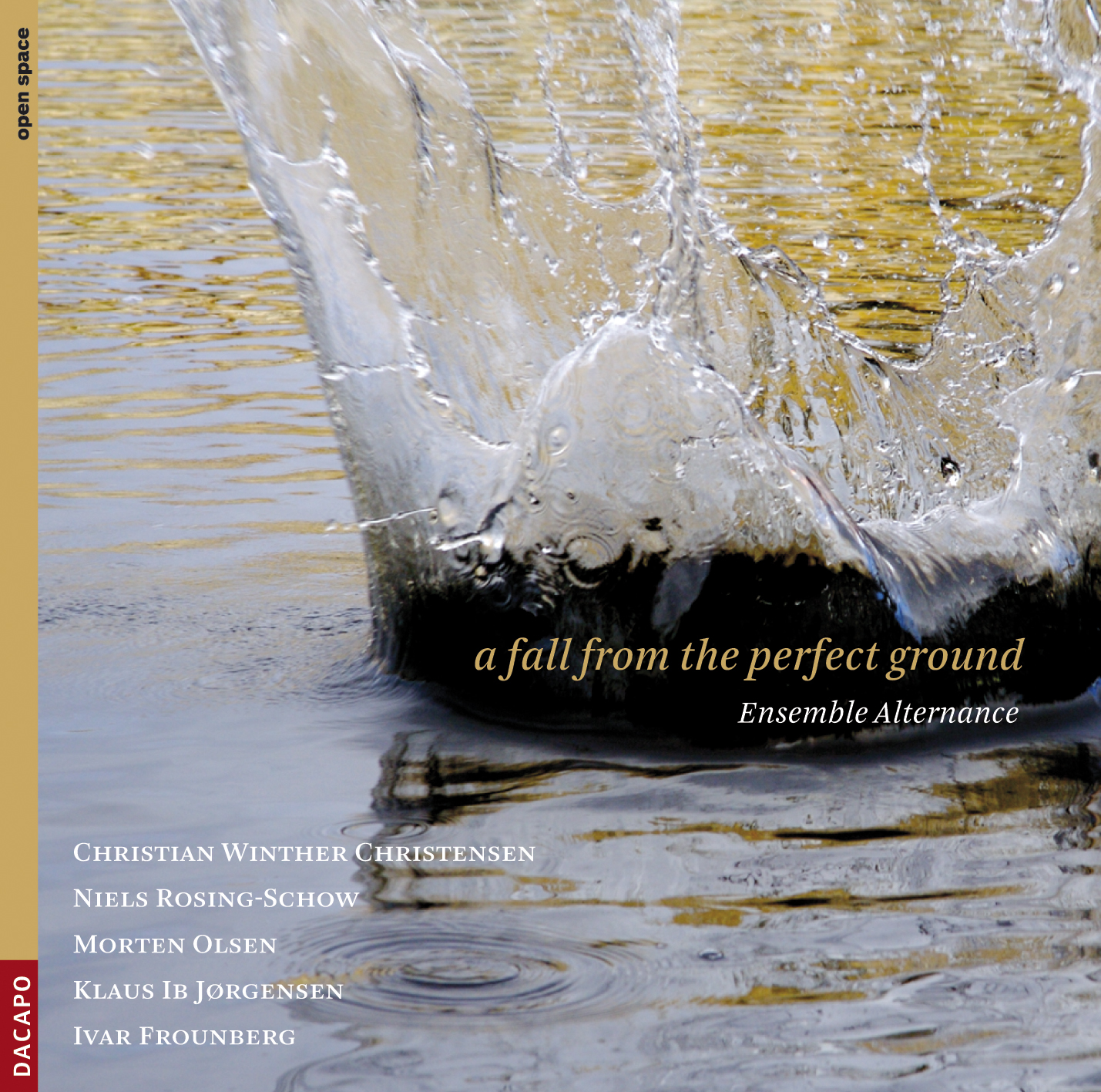 There is a whole generation between the oldest and the youngest composer on this release. Yet there is still a strong unifying strand of sound that links all five and creates a narrative of Danish music after the turn of the millennium: from middle-aged Niels Rosing-Schow and Ivar Frounberg's many years of work with sonorities and harmonics respectively, through -computer-processed acoustic music and Morten Olsen's straightforwardly pithy motifs and Klaus Ib Jørgensen's wild profusion of ideas to the youngest, Christian Winther Christensen, and his minutely detailed sound constructs. None of them composes in the same way or achieves even approximately uniform results - each has his original voice; nevertheless one can feel the affinities in the sound.

The first work on the CD, Christian Winther Christensen's A fall from the perfect ground (2004-7), is an extraordinarily delicate piece of music which is perhaps most of all about beautiful musical sounds and sparkling effects composed over the surfaces of the sounds.

The music is in fact not all that easy to get a handle on. What is happening is extremely detailed, and as a whole the music offers a rather unmanageable amount of innovative, impressive, fascinating sounds. The music doesn't have so many melodies, rhythms or harmonic progressions in the normal sense, nor does the form reveal itself in the course of the first few listenings.

Instead the music proceeds as series of sonorous eruptions; at first very cautious and flickering - almost reserved - then more rhythmically, only to reach a new, almost static low point. The ending, on the other hand, is very striking, with a little, extremely telling clarinet theme, and is in fact quite distinctive in the context. As the only example in the piece the characteristic passage is repeated eight times with complete regularity before the music stops.

The detail has been lovingly cultivated to an extent that makes the music unreadable for the layman. Everywhere Winther Christensen varies the modes of playing and assaults the otherwise normal instruments with new technical ideas. If the acoustic sound was not so distinct and warm-blooded one might be misled into thinking that this was a piece of electronically manipulated music.

Despite all this it must not be thought that this is difficult music. Although one's mind can easily sense that A fall from the perfect ground is hard to play and has taken a very long time to compose, the music is sensual and simple with the many beautiful sounds that well forth one after another.

The fixed framework of poetry

Niels Rosing-Schow's Two Sonnets by Borges (2005/2003) uses the work of the Argentine writer Jorge Luis Borges (1889-1986). Under the synonymous titles Everness\ and \\Ewig-keit\\ (in English and German, although the poems are in Spanish) Borges deals with some of the biggest questions of all: what is eternity, what is death, and what does this mean for me?

The rather doomy issues are one of the characteristics of Borges' two poems. The other is that they stick to the formal framework of the originally Italian Renaissance form the sonnet, which Petrarch (1304-74) and Shakespeare (1564-1616) mastered to perfection. A typical sonnet consists of fourteen lines in groups of four + four + three + three, often in iambic pentameters (da-dum, da-dum, da-dum, da-dum, da-dum) and with a fixed rhyme scheme.

In other words we are dealing with music that is based on a very particular fixed poetic form, so that not only content but also phrasing and stresses were already there as a basis for Rosing-Schow prior to his work with the songs. His musical working conditions were clear from the start.

The musical result is dual in nature. On the one hand the music is throughout highly dramatic and concentrated, with very many rather extreme motions, for example in the piano and woodwinds; and on the other it has a calm overall expression where there is room for the song, and the poems can find the necessary space to sound in.

The title of Morten Olsen's work from 2002 is mirages - that is, the odd illusions that nature sometimes produces when hot air meets a cold surface, makes the rays of light curve, and suddenly a Scottish harbour town is visible from the west coast of Jutland, or the sea appears in the middle of the Sahara.

Morten Olsen's musical piece functions in rather the same way. Six brief glimpses, each lasting about one minute, and then a seventh movement where what is reflected is experienced at its full length. The seventh movement is thus in a way the real musical piece - the whole actual work that is suggested in strange, fragmentary reflections six times before it is fully launched.

Besides being a surprising and rather original musical form, which with the six reflections has already formed an idea of the music in the listener before it is heard, it is also concretely very convincingly riveted together in mirages.

For the seventh movement that one hears is itself perfectly formed, with a more or less classical arch of tension built up from a series of truly beautiful motifs. A long time after one has heard the piece one can find oneself trying to hum the characteristic little turning piano and violin motif, or suddenly recalling one of the very beautiful piano and clarinet sounds.

Moonlit was composed in 2006 for soprano, flute and string trio to a poem by the Portuguese writer Fernando Pessoa (1888-1935). Moonlit is an independent piece, but also the fourth movement in Klaus Ib Jørgensen's large Pessoa work cycle (lasting an hour and a quarter), Moon-pain, written between 2004 and 2007.

So much for what can be written factually and formally about the music before getting into deep water poetically and musically (and analytically). For both Pessoa and Jørgensen are very original artists. Pessoa is only now being explored as a poet - he lived a strange double life in Lisbon, where he earned his living by day as a translator in the commercial world and by night let his hair down as a dissolute poet. He left about 27,000 pages of writings of many kind, written under a long list of different names fully furnished with identities, educations, views etc.

The poem that is sung through in Moonlit (also supplemented with a few sentences in French and drawn out beyond recognition in demented melismata) was originally called Lycanthropy. That is, the art of changing into a werewolf. The scene is set by a lake in the pale moonlight, and this is underlined throughout musically by dazzling voices which effloresce around the soprano's more and more hysterical discharges of energy. The culmination actually comes with this instruction to the singer, \\Die \\Nachtkönigin,\\ only worse!\\ (referring to those wild soprano coloraturas in Mozart's Magic Flute).

Ivar Frounberg's Prélude-Voyage-Jotunheim (2002) was originally meant to have an overall title that could frame the music's very concrete source of inspiration: a journey by car from Oslo to Tyinn. But given the hard fate of the Norwegian place names in French mouths it ended up with just the movement titles.

According to the composer himself the music grew directly out of the fleeting encounters - experienced through a car window - with the changing Norwegian landscapes and their overwhelming grandeur and diversity. Yet these are not tone-paintings; it is the abstract qualities of the experiences that Frounberg has used. Put differently, it is the slow build-up to real action that is characteristic of the music's alternation between small glissandi and calmly progressing sounds in Prélude; it is the quick glimpses and constant transformation that dominate the second movement with its many pulsating note repetitions; and it is perpetual, extremely slow transformation - inspired by the Jotunheim massif - which with series of top-to-bottom sustained sounds encompasses the last movement.

Frounberg's musical language is sharp and insistent, and it is paradoxical how one constantly senses that great virtuosity is being demanded of the musicians in myriads of rhythmic stresses and fast entries - while at the same time one feels that one hears all the way through the layers of the music that the many notes are woven together in a both transparent and tough web.

Recorded at the Royal Danish Academy of Music on 1 November 2007 (Christensen and Rosing-Schow)
and at the Gennevilliers National Music School, Paris, on 11 November 2007