Anne Mette Stæhr, Svend Winsløv, Finn Savery, John Kruse, The Synergie Guitar Quartet
Finn Savery is a versatile musician and composer. Throughout his career he has been active as a performing jazz pianist and classical composer. He has an undogmatic attitude to musical styles and composes in a wide area ranging through the tonal tradition, European modernism, folk music, popular music, jazz and rock. This CD features Finn Savery´s chamber music, which contains the most concentrated expression of his artistic personality, the suppleness and humour as well as his artistic ingenuity and lyrical sensitivity.
Buy album 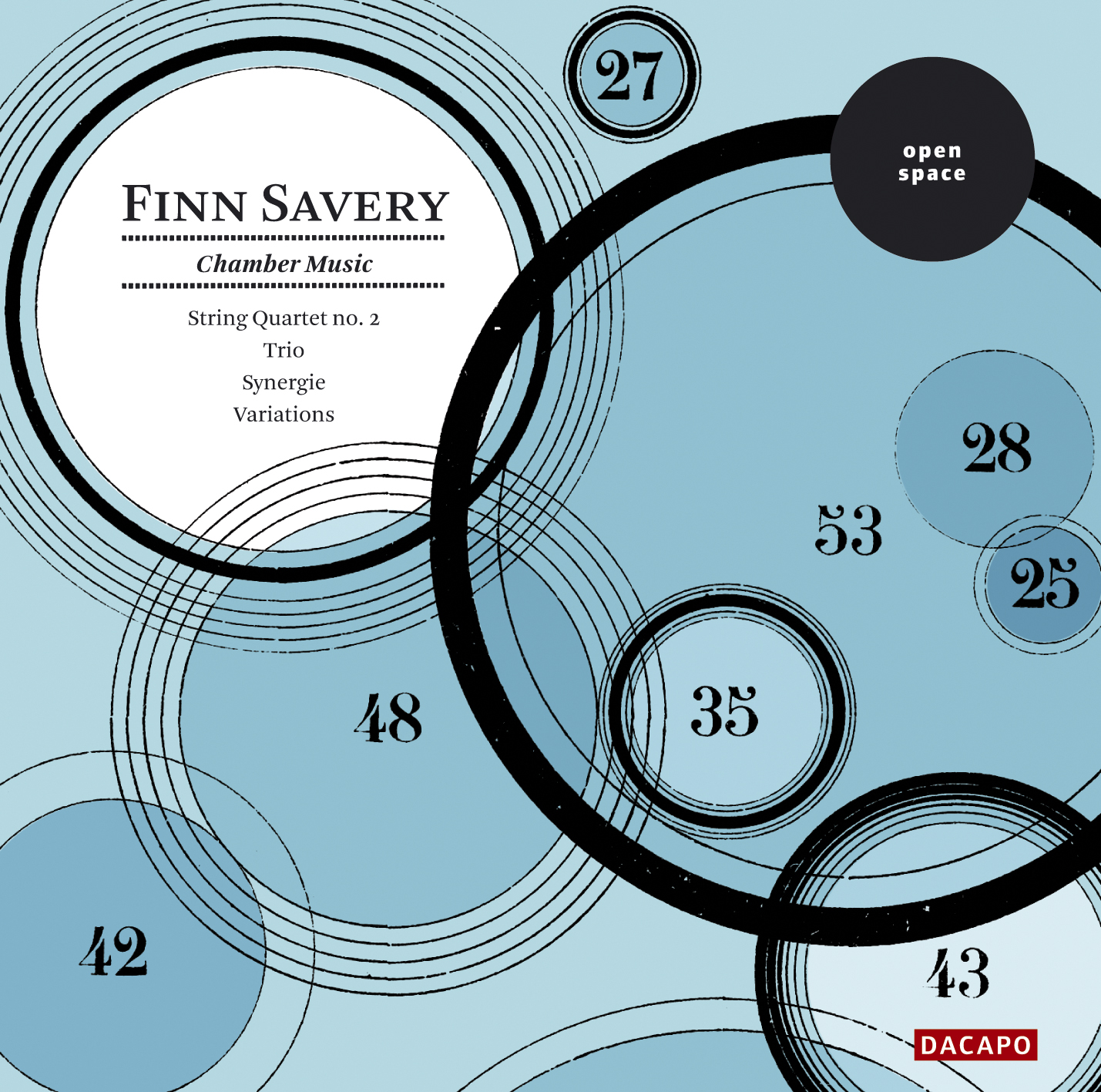 Finn Savery and his chamber music

Finn Savery became famous as a composer of musicals, in particular Teenagerlove (1962), but before that he was already a well known name as a composing and performing jazz musician. Many of his compositions combine jazz improvisation and written -music, but the through-composed works and in particular the chamber music represented on this CD are the most concentrated expression of his artistic personality, flexibility and humour as well as his artistic ingenuity and lyrical sensitivity.

After training in piano and studying composition with Niels Viggo Bentzon at the Royal Danish Academy of Music in Copenhagen in 1953-60, Savery attended courses in Darmstadt, New York and Boston. He was one of the first of his generation to work with twelve-tone composition and serial music; the work Sections I-II from 1966 is inspired by and written for flute, viola, guitar, marimba, vibraphone - the same ensemble as Pierre Boulez' famous Le marteau sans maître.

Among other roles, Savery has been a member of the board of the Danish Composers' Society and the Music Committee of the Danish Arts Foundation, and has received the lifelong artist's grant of the Danish State.

Of the works on this record the guitar quartet Synergie is the most outward-looking. The work Variations unites contrapuntal elegance with a vital love of music-making. The String Quartet and the Trio range widest in their expressive resources, and include profound and complex sections. As an aid to those who wish to immerse themselves in these two works, the descriptions indicate times for some of the turning-points in the course of the music.

Both the preceding and the next of Savery's three string quartets are more unified and also only half as long. The former, from 1956, shows Savery's preoccupation at that time with twelve-tone music, while no. 3 from 1990 is related to his jazz compositions.

The four-part first movement begins with long, staggered notes that constantly form harmonically tense intervals (major sevenths). From a dark, restrained beginning the expression opens up with a bright, dreaming theme in a lighter tempo, played twice. After a brief, reflective interpolation (1'36) the theme returns; this is repeated (2'48) with the interpolation at a higher pitch, and with the theme at a lower pitch than before, now continued in lingering repetitions of the minor thirds of the beginning of the theme at three different pitches at once. Finally, a simple pentatonic melody is played, with a ‘Far Eastern' sound, recalling the theme of the preceding development.

The second movement falls into three parts. The outer sections consist of pentatonic figures unfolded in a gently rocking -sextuple time. Midway through the first section (1'17) the basic scale changes and the figures become more pronounced. At 2'33 the middle section begins in an energetic 4/4 time; it is itself in triple form with a middle section from 4'18 at a calmer tempo and is further subdivided into episodes separated by brief pauses. The episodes take the form of a kind of variations with no stated theme and alternate harmonically between major scales and chromaticism, rhythmically between more and less complex relationships among the four parts that intertwine with angular movements as if controlled by a complicated abstract process, in strong contrast with the organic effect of the outer sections. The last section from 5'18 is longer than the first, and the figures are more varied; here too there is change in scale and towards the end even alternation between the scales.

The cello introduces the third movement with a monophonic exposition of the dreaming melody of the first movement. The viola transforms it into a chromatic theme of four rhythmically identical lines that are reversed and inverted. This theme is varied melodically and rhythmically so that it is mostly recognizable from the angular profile and the four-square metre: first by the second violin accompanied by the viola, then by the first violin accompanied by the previous two and from 3'44 in a free continuation supported by the cello, which resumes the theme in another two variations disturbed by its colleagues' ever more enthusiastic chatter. After a last intense burst from 5'36 they at last fall calm with the lingering thirds from the end of the first movement, now continuing in the theme itself. The movement ends with the pentatonic melody whose contour had formed the background for the themes of the work.

The quartet was commissioned for the Kontra Quartet by the Frederiksborg County Council and the Danish Arts Foundation, composed in 1983 and was given its first performance in Hørsholm Church the same year.

Trio for clarinet, cello and piano

The work is in three almost equally long sections with no pauses between them, but clearly separated and with strong contrasts between them.

The introductory chords present the basic harmonic ‘characters' of the first section: two chromatic chords end in a third chord that combines two triads within a minor scale. On the basis of this scale the clarinet and cello embark on a duet of calm, staggered, stepwise ascending melody lines, to be executed ‘with warmth'. However, they are interrupted by ever more intense figures and chromatic chords in the piano, which after a short, shared espressivo (1'19) takes its discharge of energy to a climax. Clarinet and cello return (2'36) with a repetition of the espressivo ending of their duet. After some alarming eruptions in all three instruments, the piano (from 3'39) quotes the beginning of the duet with the expression changed to marcato. The first part of the work is rounded off by a calm alternation between the notes of a piano chord that is slowly transformed, and which the clarinet and cello fill out with ever-denser arpeggio figures in a crescendo to fff.

The middle section with the designation ‘very rhythmically' (4'30), unlike the inward first section, has a carefree feel. It is borne up by pulsating piano chords with shifting syncopations, sometimes reinforced by the other instruments, and unfolds in pentatonic figures, harmonies and melodies that are all kept within a major scale that changes from section to section: a cheerful clarinet theme, a dancing piano solo, a wistful cello melody, and finally figures from the clarinet theme which initiate a race of scales ascending and descending until all three reach their goal at the same time.

The piano punctuates with a semicolon - a long-held forte fortissimo tonal cluster - and begins (8'49) the last section of the work with three chords like those that began it, but lower, followed by the duet, now at a high pitch with descending lines. Yet the reappearance is brief, the double triad returns and with small fluctuations forms a calmly strolling accompaniment to a cantabile antiphon between clarinet and cello, until the music fades out.

The trio was composed in 1999 at the initiative of Ny Musik Odense with support from the Danish Arts Foundation and was given its first performance at the Carl Nielsen Academy of Music in Odense the same year by John Kruse, Svend Winsløv and Anne Mette Stæhr.

The synergy of the four times six strings is manifested in different ways in each of the three character pieces.

Signal\ is the simplest. In this, one pair of instruments supplies an accompaniment of regularly struck chords over a syncopated bass for a melody supported by a middle voice. The melody starts over several times, each time with an energetic signal, and dies out in various ways after statements with various durations. Towards the end the accompaniment stops, then is resuscitated by a final call - but in vain.

In \\Écho\\ there is only one accompanying voice, alternately as a gentle humming, rocking between two notes, and as a tenaciously aspiring bass line which a few times climbs up and falls down again among the constantly recurring double echo chords that dominate the piece, apart from two brief four-part interpolations and a relaxed ending, poco ritenuto, liberamente.

The wave motions in \\Ondes\\ are produced by all four instruments gliding in parallel through luscious chords. The regularity is broken up by staggered accents, by small rhythmic subdivisions and from 0'57 by lightly falling note lengthenings, followed by faint swells that end in a melancholy waltz with awkward harmonies. The waves return, but when the waltz rhythm appears again the music comes to an abrupt end.

Synergie was composed in 1991 with support from the Danish Arts Foundation and was given its first performance in 1993 in the DR Concert Hall by the Nordic Guitar Quartet.

Variations for clarinet and string quartet

Each of the three sections consists of a clarinet melody with a variation. \\Melodi I\\ is pentatonic and consists of nine notes which are then inverted. It is presented cantabile with grace notes that form another pentatonic scale and is repeated accompanied by the cello with a counter-voice whose beginning anticipates\\Melodi II\\. The variation \\Kubus\\ reflects the melody in four other pentatonic scales, first successively and then simultaneously.

\\Melodi II\\ is a decoration with chromatic connecting-notes of \\Melodi I\\, played liberamente. The variation is called \\Fuga\\, three passages introduced by a chord pyramid and consisting of strict canons in two, three and five parts composed of figures from the melody with inversions and rhythmic patterns. The clarinet expands the figures into high leaps. In the concluding hectic ‘stretto' the clarinet plays the theme backwards.

\\Melodi III\\ too is based on \\Melodi I\\, but in this case the connecting-notes remain within the pentatonic scale, and it is followed by a scale spiral that winds up through two and a half octaves through changing keys. The variation has the Baroque designation \\Gigue\\, but the character rather shifts between chamber jazz and minimalism. After the clarinet has plunged into a virtuoso solo passage it is caught and restrained by the quartet, which stops while the going is good ...

Variations was commissioned by Edition Samfundet with support from the Danish Arts Foundation, composed in 2003 and given its first performance the same year in the concert hall of the Louisiana Museum of Modern Art by John Kruse and The Kontra Quartet.

Recorded at the Carl Nielsen Academy of Music on 13 February 2005 (Synergie), at Manziusgården on 26 February 2006.

(String Quartet and Variations) and at the Royal Academy of Music, Århus, on 9 December 2006.