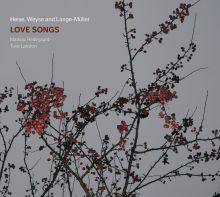 For many years Tove Lønskov has been a lecturer at the Royal Danish Academy of Music in Copenhagen and the North Jutland Academy of Music. She has a wide-ranging career as a soloist, chamber musician and accompanist in Denmark and abroad. She has been a soloist with most of the Danish symphony orchestras and has worked with among other conductors Uri Segal, Thomas Briccetti, Jorma Panula, Zdenek Macal, Avi Ostrowsky and many Danish conductors.

As a chamber musician she has played with such famous names as the flautist Jean-Pierre Rampal and the Russian violinist Leonid Kogan, and for many years she has been a regular duo partner with the flautist András Adorján.

With the pianist Rodolfo Llambias she forms a much-appreciated piano duo that has received several prizes. The duo has recorded many CDs, including the collected piano works of Debussy and Schubert, and has given concerts all over the world.

She has also worked with many outstanding singers, and this has resulted a wealth of CD recordings of among other things songs by Schubert, Richard Strauss, Schumann, Grieg, Schoenberg, Børresen, Carl Nielsen, Schierbeck, Niels W. Gade, Heise, C.E.F. Weyse and Otto Mortensen. On two highly acclaimed solo recordings she has recorded piano works by Rued Langgaard, Poul Schierbeck and Otto Mortensen.

Tove Lønskov regularly gives master classes abroad. She has also been a teacher of many of the most important young Danish pianists.