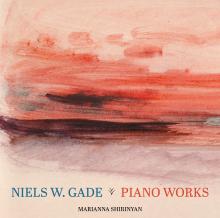 Armenian-born Marianna Shirinyan is one of the most creative and sought-after pianists on stage. As a soloist and chamber musician she is a frequent guest at a string of major international festivals, among them the Schleswig Holstein Music Festival, Bergen Festspillene and the MDR Summer Music Festival. She has appeared with orchestras such as the Danish National Symphony Orchestra, Oslo Philharmonic, Gothenburg Symphony, Bavarian Radio Symphony Orchestra, Kammerakademie Potsdam, Munich Symphony Orchestra, Tapiola Sinfonietta and the Helsinki Philharmonic Orchestra. Among the conductors she has worked with are Zoltán Kocsis, Hans Graf, Antonello Manacorda, Jun Märkl, Daniel Raiskin, Thomas Søndergård, Krzysztof Urba?ski and Joshua Weilerstein. Marianna Shirinyan’s discography includes the solo recital disc Il Viaggio (released by Solo Musica), concertos by Beethoven (no. 1) and Friedrich Kuhlau with Copenhagen Phil (Orchid Classics), the Mozart concertos nos. 12 & 23 with Odense Symphony Orchestra (Bridge Records), chamber music by Chopin with cellist Andreas Brantelid and violinist Vilde Frang (EMI) – all have been received enthusiastically by reviewers and listeners alike.

Marianna Shirinyan, who received her education in Yerevan, Armenia and later at Musikhochschule Lübeck, received the Danish Music Critics’ Artist Prize in 2009. In 2010 she received the Danish radio’s P2 Artist Prize for her contributions to the musical scene in Denmark. During the season 2013-14 Marianna was ‘Artist in Residence’ at Odense Symphony Orchestra and from 2014-2016 at DiamantEnsemblet in Copenhagen. Since 2015 she is a Piano Professor at the Norwegian Academy of Music in Oslo. Marianna Shirinyan has been a Steinway Artist since 2013.