In Danish composer Martin Stauning's work, we often experience the power of what is left unsaid – in the space between the notes, in elusive rhetoric or theatrical suggestion. However, in the Harp Concerto (2020), written during the Corona pandemic, Stauning took a rather concrete starting point: the strings acted as bars under which the harpist was physically trapped and unable to escape. 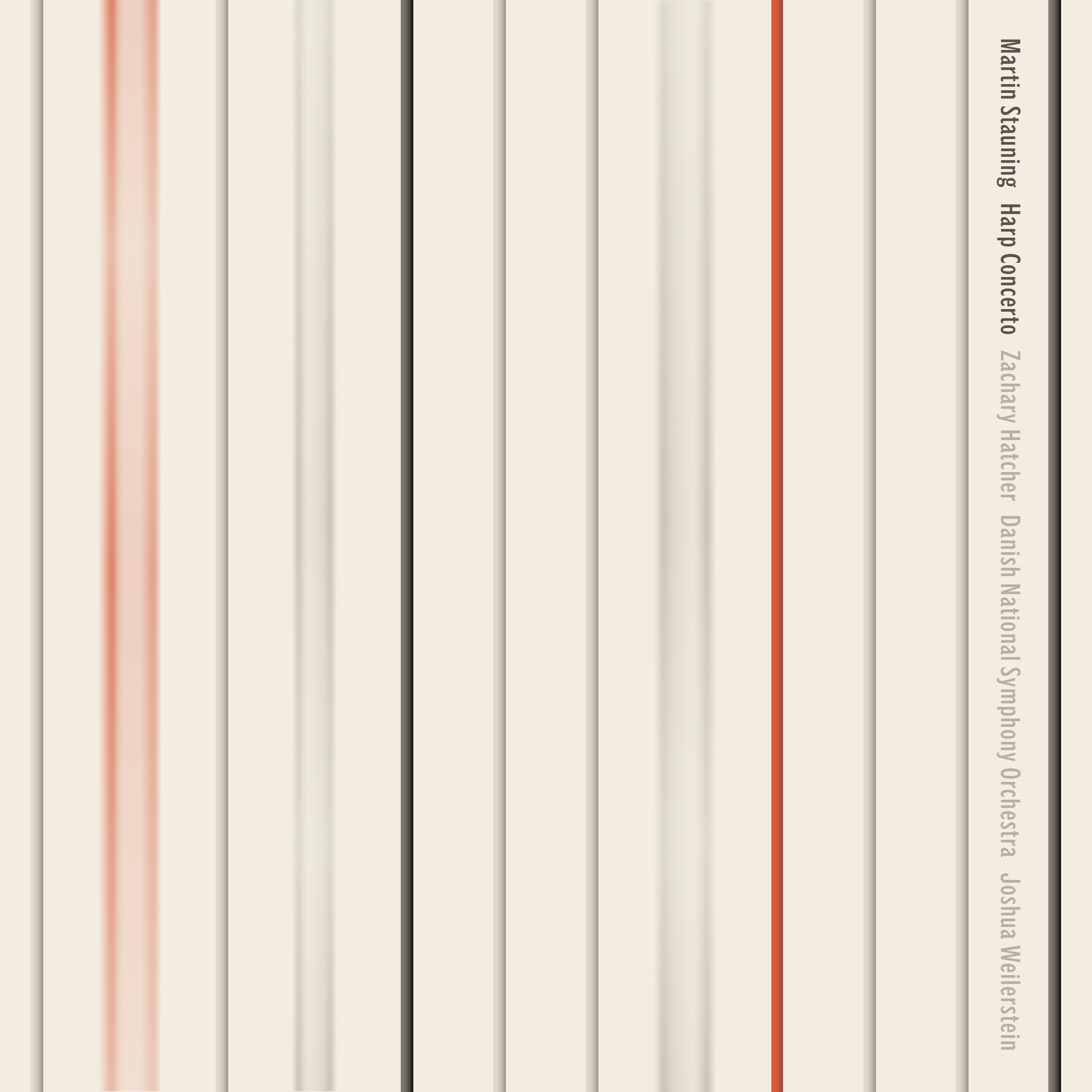 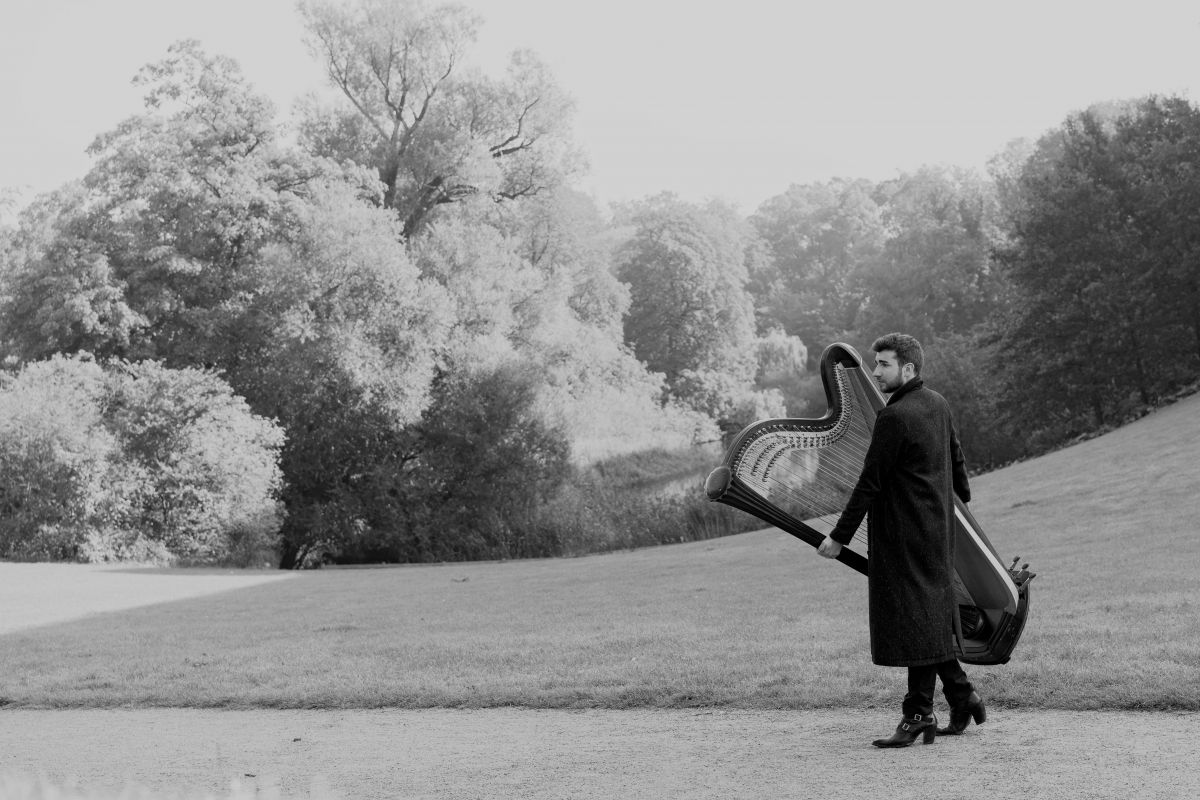 Martin Stauning © Caroline Bittencourt
It's simply a ravishingly unique piece of music that Martin Stauning has put together
Sune Anderberg, SEISMOGRAF
Everything is balanced nicely in a grandiose finale, showing exactly how good an orchestrator Stauning is. [...] It is an impressive work.
Evanthore Vestergaard, Kulturen.nu
SELECT PREFERRED FORMAT TO DOWNLOAD SINGLE TRACKS.
Total runtime:
24 min.
Booklet

Martin Stauning trained as a ballet dancer, which as a child brought him into regular contact with the Royal Danish Theatre and Orchestra. One of his earliest experiences on stage came when he portrayed Marie’s son in a Royal Danish Opera production of Alban Berg’s opera Wozzeck. The child’s own curiosity about the brutal world around him set up Stauning’s own quizzical reaction to the domains of sound, performance and aesthetics.

By the age of 24, Stauning had given up ballet. He was awarded a place at the Royal Danish Academy of Music in Copenhagen where he graduated as a composer in 2016, having already produced two probing string quartets marked out by their sure form and adroit handling of musical energy.

Two years later, Stauning’s first major orchestral work Liminality was performed by the Danish National Symphony Orchestra. The score explored principles surrounding transition, contrast, outspokenness and introspection as well as the post-modernist notion that a piece of music only really exists as an artwork in the listener’s response to it. Liminality established Stauning’s ability to handle the symphony orchestra with lucidity and elegance, whatever sounds he happened to be asking it to make.

Often in Stauning’s work, we experience the power of what is left unsaid – in the space between the notes, in elusive rhetoric, in theatrical suggestion or in the residual effects of contrast or confrontation. ‘Rather than actual narratives understood as a kind of programme music, I try to set up greatly reduced tonal spaces in which the listener can associate freely with the titles of the works,’ the composer has said.

In May 2021, the Danish National Symphony Orchestra gave the first performance of Stauning’s Harp Concerto under conductor Joshua Weilerstein. The work was commissioned by the orchestra for its own solo harpist since 2016, American harpist Zachary Hatcher. The score was composed during the pandemic-induced lockdowns of 2020 and 2021.

In creating his new work, Stauning was mindful of the rarity of the harp concerto as a format, and with good reason. Following the lead of Luciano Berio (specifically, the Italian composer’s Chemins I for harp), Stauning reduced the strength of his upper string sections resulting in a score for sections of eight players each. This affords the solo instrument greater freedom and space, lessening its obligation to compete with high sonorities similar to its own.

In turn, the reduced string scoring also induces a greater focus on deeper string timbres that can set the harp in contrast while also allowing for greater agility with individual string sections, now able to articulate and annunciate in what Stauning has descibed as a more of a ‘salon’ style.

The concerto is cast in three movements, the first two of which contain three sections (‘A’, ‘B’ and ‘C’) founded with the same material but taken in different directions. The result is a formal rootedness the likes of which has been explored by many other Nordic composers, a design feature which refracts another of the concerto’s central ‘mirroring’ techniques.

One of Stauning’s initial concepts was born of the observation that the harp is a notably visual instrument: the musicians’ manual interaction with large, vertical strings is clear to the naked eye. If one laid the harp flat, Stauning imagined, one could almost see its player as a puppeteer pulling strings.

In the score that followed, that theatrical idea is realized in music through the solo harpist’s instantaneous and unequivocal effect on the instruments that surround it in the orchestra: Stauning decided that every time the harpist plucked a string there would be an instantaneous or ‘mirror’ reaction from within the orchestra – as if the ensemble were a giant puppet theatre under the harp’s control.

Another ‘mirroring’ technique Stauning adopts at times is that the orchestra’s strings and the harp ‘snap’ their strings in the same way. As the concerto progresses, however, the soloist and orchestra are pulled apart. Stauning has said that the orchestra’s strings form something like to imprisoning bars, behind which the harpist is trapped, ‘locked inside…completely physically’. At the concerto’s conclusion, he explains, the harpist ‘literally sits and tears the strings and simply cannot get out.’

Before that, Stauning’s harp proves itself adept at luring the orchestra into new states of being. It demonstrates a particularly controlling effect on the orchestral piano, wood blocks and cabasa as well as strings.

After the soft-focused but stern rhythmic effects of the first movement, which sees the soloist gradually whip wind and brass into a Rite of Spring-like frenzy, the harpist plays a thrifty cadenza before a central slow movement akin to a shimmying nocturnal dance. The third movement snaps straight into a maelstrom powered by driving rhythms. The harp’s angelic arpeggios cannot calm the orchestra’s snarling salvos, but a simple F sharp minor chord ultimately holds the key to its release.