Wayne Siegel (b. 1953) is a Californian composer who settled in Denmark and is a pioneer of the interaction between computers and acoustic instruments. The title work of this CD is constructed solely from the voice of a singer which has been transformed into percussive elements, pitches and melodies. Other intriguing effects on this album include electronic canons, layering and delayed echoes – all putting the acoustic solo instruments into new and exciting perspectives. 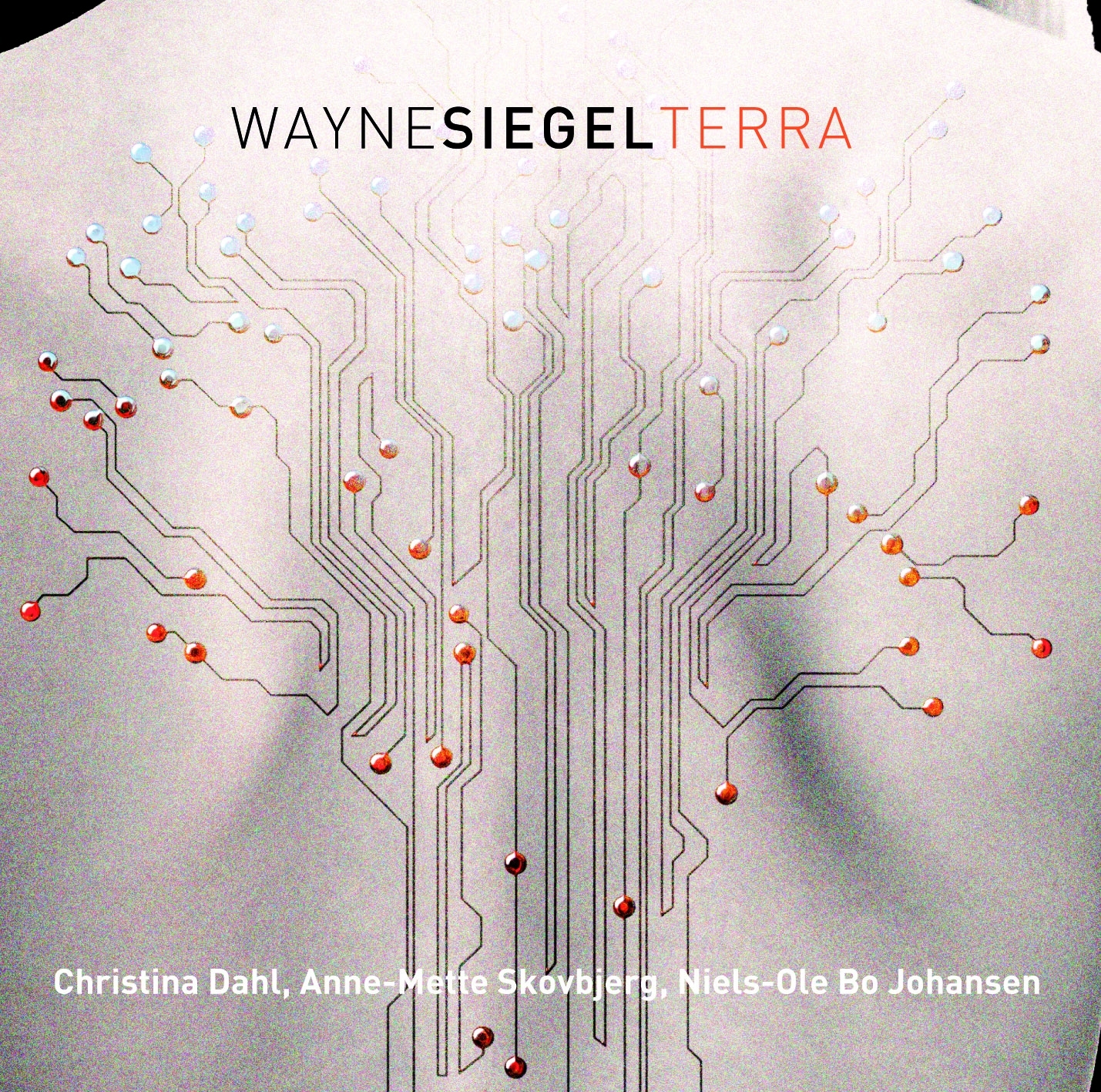 Siegel and electronics by Kristian Hverring

Wayne Siegel was born in Los Angeles in 1953. From 1971 to 1974 he studied composition and philosophy at the University of California at Santa Barbara (UCSB). After three years at UCSB he decided to complete his Bachelor of Arts degree while studying with Per Nørgård in Aarhus, Denmark. After receiving his degree in composition from the Royal Academy of Music in Aarhus, Siegel chose to remain in Denmark and work as a freelance composer. Since 1986 Siegel has been director of DIEM (The Danish Institute of Electronic Music) in Aarhus and is an enthusiastic promoter of Danish electronic music. In 1994 he chaired the 19th International Computer Music Conference (ICMC) in Aarhus. In 2003 DIEM became part of the Royal Academy of Music in Aarhus, and Siegel was appointed professor of electronic music: the first and, so far, the only one in Denmark. Wayne Siegel has composed music for many Danish and international orchestras and ensembles, including the American Kronos String Quartet, which often works with acoustic intruments and electronic techniques.

Wayne Siegel's music has deep roots in American music. During his childhood he was influenced first by American folk music and later by blues and avant-garde rock, especially Frank Zappa. Other important influences include Steve Reich, György Ligeti and American minimalism, a genre with which Siegel is often associated. Early influences from more popular genres have become increasingly apparent in his music, which may explain why Siegel's work often seems more accessible than much contemporary music.

Wayne Siegel has often worked with canon technique as a musical process. Rosewood Afternoon (1980) included on this release, Autumn Resonance (1979), Domino Figures (1979) and Devil's Golf Course (1986) are all examples of works that explore canon technique using electronic delays or, more traditionally, with several musicians. Domino Figures is a piece for 10-100 guitars! A performance in 1993 featuring 105 guitars on the occasion of the fifth anniversary of the Danish television channel TV2 placed Siegel in the Guinness Book of World Records. The title refers to the way in which musical shapes wander through the guitar ensemble like falling dominoes.

Computers and other electronic musical instruments are commonly used in Siegel's work. He has composed a number of works that mix acoustic instruments with new technology. Interactive computer music, or music where humans interact with computers during the creative process, is a field that Siegel has explored intensely since the 1990s, in modern dance, music, and installations. He has contributed to the field both through his research and through his interactive compositions. One of his most ambitious works to date is the two-hour-long science fiction-opera Livstegn (Signs of Life) (1993-94), with a libretto written by Siegel's wife, author Elisabeth Siegel. The work involves four singers, nine musicians and several computers controlling interactive computer music programs and computer graphics as well as live video.

Siegel lives with his family and a jackdaw named Alice. Alice has played a central role in Jackdaw (1995), in which the sounds produced by the bird are manipulated, morphed and transformed along with the sounds of a bass clarinet to create a lively dialogue between the instrumentalist and the computer. In addition to his compositions for acoustic instruments, computers, and small birds, Siegel is an avid kayaker who is working hard on improving his Eskimo roll\. As an American living in Denmark, Siegel is perceived as a European in America and as an American in Denmark. One of the characteristics of Siegel's work and of him as a person is that he brings together seemingly foreign musical worlds. Despite their inherent differences he creates a dialogue and succeeds in communicating in a direct and congenial way.

Terra is a work in three movements for mezzo-soprano and computer with lyrics by Wayne Siegel. It was originally commissioned by the Danish mezzo-soprano Helene Gjerris in 2000 with support from the Danish Arts Foundation and later performed on several occasions by Christina Dahl.

The work is constructed solely from the voice of the singer. This is naturally apparent in the sound image, but what may be more difficult to perceive is that the underlying music is also produced using the singer's voice transformed by means of digital signal processing. Recordings of the vocalist singing and reading aloud become the basic building blocks of the work itself. Siegel has transformed her speech into both percussive elements and pitches and melodies through the use of comb filters, a special kind of digital filter that can produce pitches from almost any sound. A special technique has also been used to morph vocal sounds with other sounds, including a church bell, to create a new sound reminiscent of a talking church bell.

Terra is a sort of science fiction film for the ears in which the singer, as the film's lead, finds herself in a state somewhere between dream and reality. She is seeking, hunting for something she has lost, something elusive, which is constantly moving just outside her field of vision. An undulating, quivering darkness surrounds her sorrowful song. A threatening undercurrent is always just beneath the surface, threatening to burst forth. In the second part, the singer briefly awakes from her dreamlike state and asks, \\Did you change the channel?\\. The question is thrown back as echoes, an escalating spiral of synthetic voices, her own voice copied and distorted. She is again in the dream and does not hear the distant church bells greeting the morning sun.

Bloopers was commissioned for the dance performance Fraklip (2008) by choreographer Louise Friis with support from the Danish Arts Foundation. The theme of the performance is the wish to edit away embarrassing episodes in one's life, as though it were a slick entertainment program on television. The desire to appear flawless and in control, stylishly dressed and boasting shiny red lipstick in all weather, and with a dynamic, forceful background music that emphasizes one's indisputable authority and sex appeal. It's about maintaining a facade at any price. Self-deception is vital in keeping up the illusion. But the background music is constantly on the verge of a breakdown. The music appears to be a patchwork of TV jingles and celebrity melodies fluctuating up and down in tempo, like a seasick videotape rapidly churning itself into tape spaghetti. Siegel has extracted a precise DNA sample of archetypical TV music and created a new mutant in an electronic work that effectively highlights the alienated and panicked atmosphere of the performance.

\\Bloopers\\ is slang for mistakes made in front of a rolling camera. In this performance, three women wriggle and become entangled in their suits as they make ever more desperate attempts to escape from their imperfect existences. No matter how hard they try, they cannot extricate themselves, and in the last scene the women are seen hanging in a large white net, exposed to the audience and caught in the inescapable and hardly glamorous reality of this universe.

Rosewood Afternoon for guitar and electronics is a good example of Wayne Siegel's use of delay (electronic echo) as a compositional technique for a solo instrument, in this case a guitar. One might also mention Autumn Resonance (1979) for piano and electronics. Solo instruments play against their own echo, which becomes an integrated part of the sound of the instrument resulting in a form of electronic canon.

The fusion of the instrument and the repetitive patterns of the delays create layers of tones and harmonies that shimmeringly glide in and out of one another. This interplay expands the instruments' immediate musical potential and allows textural and rhythmic structures of a higher complexity than usually possible with a solo instrument.

In Rosewood Afternoon the delay creates garlands of continuously changing ornamentation through Anne-Mette Skovbjerg's guitar. Shimmering runs burst forth in alternating right and left speakers, reflecting the guitar's phrasing. Thoughts turn to Steve Reich's constantly cycling \\layer upon layer\\ technique where sequences of varying lengths and staggered introduction are repeated over and over atop one another, resulting in continual overlaps in new and surprising ways. The repetition of the echo layers itself upon new tones, and new layers of harmonies and changing rhythmic permutations are created.

In the first part the delay is used mainly as a timbral tool, while in the second part the focus is on the rhythmic potential of the delay. The speed at which the delay repeats the guitar's tones establishes the music's rhythm, and new phrasing is played to fit into the pulsating cycle of the delay.

Jericho 2.0 for two trombones and computer was commissioned by Niels-Ole Bo -Johansen with support from the Danish Arts Foundation. One can experience the work as a rapid and humorous rollercoaster ride in which the two trombones tell the Biblical story of Joshua's powerful horns that brought down the walls of Jericho. The electronic part -represents Jericho, a dynamic creature of metallic rattling and clanking that booms forth in hectic activity while it battles to stay upright. At times it sounds as though the trombones have succeeded in crumbling the wall into dust. Individual tones and short phrases dart back and forth between the trombones in a jumping dance, like a competition between two jugglers trying to keep their balls in the air as long as possible.

The city of Jericho is located on the West Bank near the Jordan River. Traces have been found of human settlement as far back as 9000 B.C., and the city is thought to be one of the oldest human settlements in the world. Jericho is mentioned more than 70 times in the Old Testament. One of the scriptures describes how the Israelites, led by Joshua, conquered Jericho. On the sixth day of the siege the city's walls crumbled to dust at the sound of Joshua's horns, and the Israelites took the city.

About halfway through the piece the mood changes radically and the trombones -begin to sound like sirens howling across a ruined and disconsolate cityscape. The walls of Jericho are dust, and all hope has deserted the city. But before long, the energy returns. The trombones become more rapid and staccato. The previous dance begins anew. The walls are once again standing, just barely - the framework shakes, the electronic circuits crackle - but despite the attempts by the trombones to knock the wall down, it remains: Just like Jericho has always managed to rebuild itself after countless attempts to destroy it.

Kristian Hverring (Krishve) is a composer, performance artist and sound designer. He often works with improvised electronic music and is currently studying electronic music at the Royal Academy of Music in Aarhus.