A computer is connected to a massive pipe organ and robot musicians take control for the next 60 minutes – without human intervention. California-born composer Wayne Siegel (b. 1953) is a pioneer of computer-based music. In his work Celebration, the four manuals of the Hallgrímskirkja pipe organ in Reykjavík are controlled by four virtual musicians, all of them eager to express themselves individually but also programmed to perform together. Icelandic hymns and live-data from a weather satellite are interpreted by the virtual musicians playing the pipe organ, embedding human culture and the climate of our planet in everything they say. 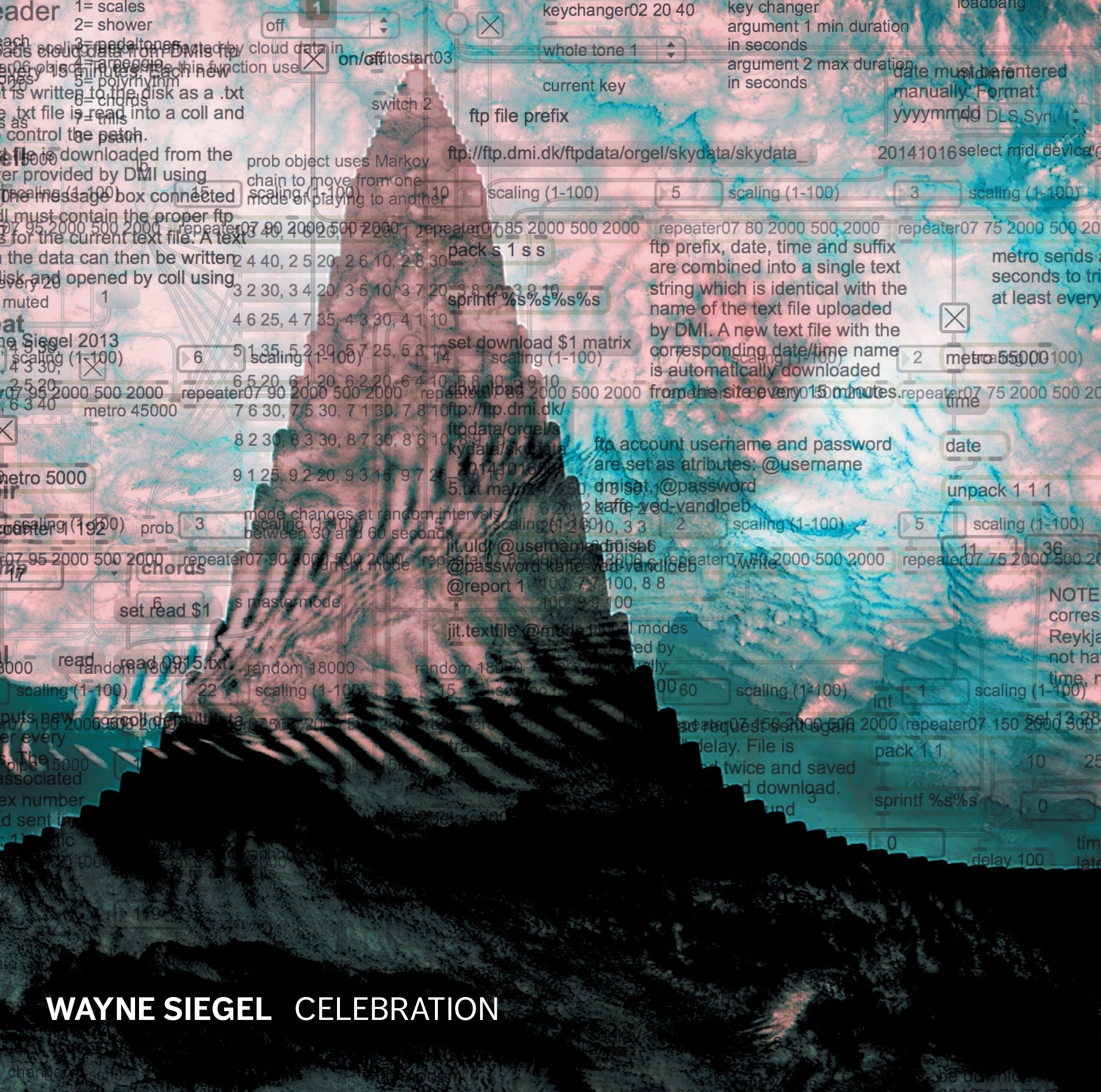 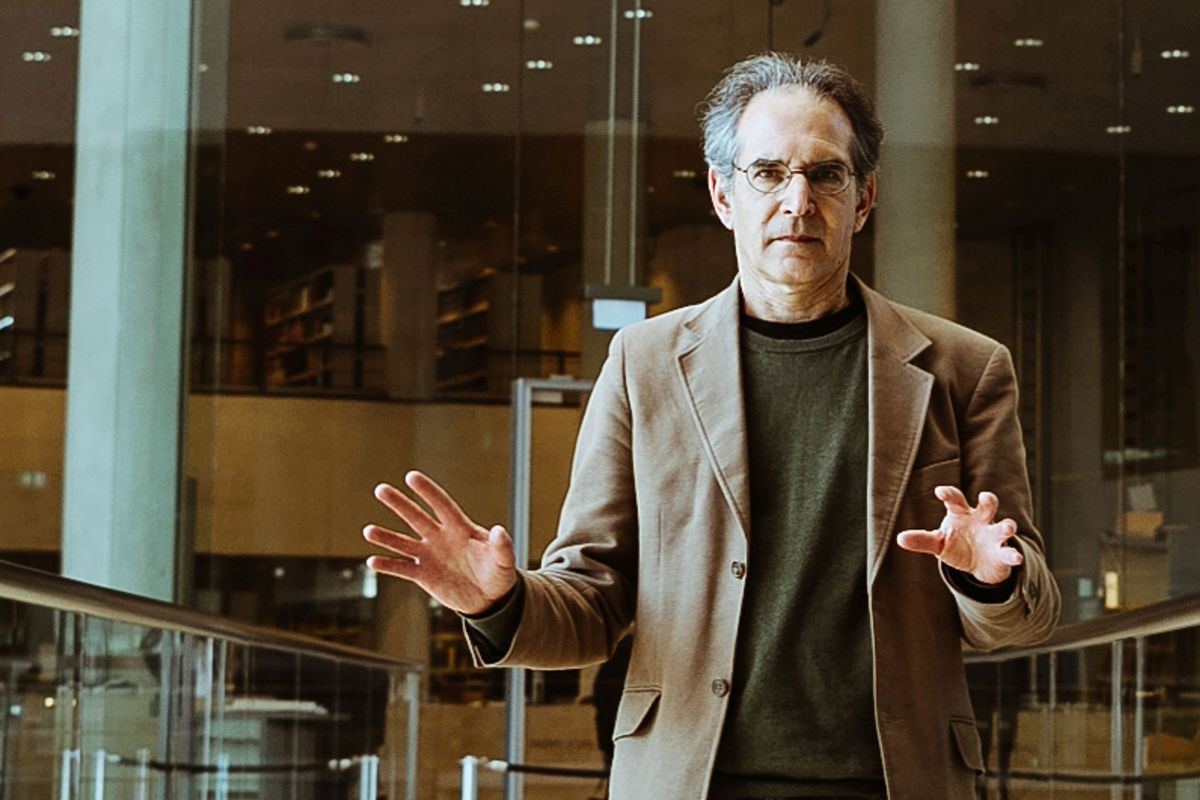 Wayne Siegel (b. 1953) is a composer, professor of electronic music and director of DIEM (the Danish Institute for Electronic Music) in Aarhus. Siegel was born in Los Angeles and came to Denmark in 1974 to study composition with Per Nørgård. Since then Siegel has lived in Denmark, where from the beginning of the 1980s he has pioneered the development of electronic music and computer-based composition. His interest in the potentials and possibilities of technology was stimulated back in Siegel’s childhood, of which he says the fol-lowing:

“As an American I often tease my very Danish children by telling them that I grew up in the future. Of course the claim has to be supported by examples from the everyday life of my childhood: the cars all had automatic transmissions and some of them had pushbutton drive. Our refrigerator had a built-in ice maker, so there were always plentiful supplies of ice cubes and you didn’t have to pour water into trays yourself. And the day our electric can-opener broke, my mother thought that we wouldn’t be able to get anything to eat until the electrician had fixed it. That was life in California in the 1960s!” (Wayne Siegel in an interview in Dansk Musik Tidsskrift, 2001-2002).

Whether Siegel is still living in the future I can’t say. But the fascination with and development of technological devices that he describes has accompanied him in his work as a composer. The organ work Celebration is no exception.

Celebration (2014) is a work for computer-controlled pipe organ commissioned by and created for the spectacular church Hallgrímskirkja in Reykjavík, which with its height of 73 metres is one of Iceland’s tallest buildings. Construction on the church began in 1945 and was not completed until 41 years later in 1986. The church is named for the Icelandic poet and priest Hallgrímur Pétursson (1614-1674), who with his 50 ‘Passion Hymns’ based on the Passion of Christ is internationally acclaimed and remembered as one of the greatest poets in the history of Iceland. It was in connection with the quatercentenary of the birth of Hallgrímur that the work Celebration was commissioned and performed.

In the work Siegel integrates characteristics from this special place in several ways: firstly, the huge organ of the church is the only instrument we hear. The instru-ment, which is from 1992, has a height of 15 metres and a weight of 25 tons, four manuals, 72 stops and 5275 pipes. In the work we hear fragments of six Icelandic hymns with melodies known from Hallgrímur’s ‘Passion Hymns’, all of which are in the regular musical repertoire at services or other rituals in the church. The recording we hear on the CD is of course also from the church. Siegel chose to record it at night so that the risk of interference from traffic noise or sounds from the visitors to the church would be as small as possible. In the present recording it is therefore not the place’s specific social and functional characteristics that are integrated; instead the place is used in a music-historical context and as an instrument for the composition; a composition that may well refer to extra-musical layers, but which in itself also cultivates and challenges the abstraction of the music. After the recording Siegel has explained: “But the work is very much also intended for public performance. The first performance was for example held in the daylight hours, the day after the recording. The two ‘performances’ were very diffe-rent, as the music is composed anew each time. In this respect the CD release is a docu-mentation of a single version or an example of a work that can have infinitely many versions.”

A non-human musician and an unreliable composer

Listening to Celebration, what we hear directly is indeed the sound of a very large organ. The form of the music is built up of small fragments in a variety of styles – melodic fragments, minimalistically repeated processes, broken chords, dramatic drones etc. Each is manifested by its own characteristics, but after a short while is quickly broken down and transformed into a new structure. There is therefore some-thing agitated about the form; something that leaves us in doubt about the creator’s actual character and intention – and where he, she or it wants to take us. The musician too is hard to place. The four manuals of the organ are operated at the same time and make the execution a ‘supra-human’ action. The operations are gestural, but not physically possible for an organist, just as the formal progression is sensed but does not seem causally built up. Siegel has explained the background for the work as follows:

“The four manuals of the organ are played by four independent, autonomous, virtual musicians. Each of them has a ‘knowledge’ of how one plays different types of music. There are also three ‘umpires’ which say when playing technique (algorithm), key and stopping are to be changed. The changes do not take place at the same time, since each progression must be concluded first. When the four virtual musicians are told by the umpires, for example, that they are to change the compo-sition algorithm, they say, “Yes, yes, I will, but first I have to finish this one.” So they do not change simultaneously. Each can with a certain independence play according to different algorithms, in different keys, with different dynamic instruc-tions. but they will have a tendency gradually to agree and to play together until they move apart again. I have tried to create a system, almost an ecosystem, where these autonomous virtual musicians could express themselves.”

The timbres in the work are in constant transformation, and along the way, with broadly conceived soundscapes and motifs played extremely quickly, they remind the listener of music played by an early analog synthesizer. The manifes-tation of the work therefore becomes an alternation between the church as a specific place on one hand and the abstract spatiality of the music on the other. It is an execution which is on one hand based on a human gesture, and on the other acts as an automaton, a machine which here stages building and organ as one mighty musical instrument which plays independently of human actions.

If we include the context – the religious text, the church and the church organ – in this consideration, this device can be related to the medieval fascination with automata, where deterministic mechanical sequences were created and performed by machines to illustrate and understand universal questions, for example about life and death, or about the natural identity as opposed to the indi-vidu-ality of human beings. In Siegel’s case something similar comes into play, but with the many formal ruptures and broken-off sequences caused by this non-deter-ministic automaton it is perhaps better understood as a conception of the world as being in flux and transformation, rather than as a more explanatory process of the kind known from the medieval automata.

If we look at the technological solutions underlying the work, such an interpretation accords well with the choices the composer has made throughout the composition process. Celebration is based on compositional ideas and techniques that Siegel deve-loped in connection with the 12-hour installation Everyone Talks about the Weather (2013), created for the organ in the Symphonic Hall at The Concert Hall Aarhus. Thanks to an earlier acquaintance with the instrument during the creation of an organ concerto (2012), Siegel had learned that the Klais organ in this hall was somewhat special, since it was equipped with a kind of digital tape recorder that can play digital recordings of the organ-playing through the instrument itself. By ‘hacking’ into this unit Siegel was able to get the organ to play – not by getting the organist to press manuals, keyboard and pedals but with the aid of his computer. The same approach has been used for the organ in Hallgrímskirkja.

For both compositions Siegel has developed a program, an algorithm, which creates rhythms, melodies and harmonies through a special generative system where the computer helps to define details in the individual sequences. Part of this process was the above-mentioned six hymns. To the overall musical algorithm Siegel added data that were continuously taken from a weather satellite with which the DMI (Danish Meteorological Institute) had helped him to connect. Changes in cloud formations and wind conditions in northern Europe affected the music at the same moment as it was created during the actual performance. In this way each performance becomes unique, since it is affected both by the weather and by the composer’s algorithm, which is based on controlled randomness: in other words the processes generated and developed by the computer’s algorithm include random elements, just as the data taken from the weather system are of course also different from day to day. Siegel himself explains this as follows in his programme note to Celebration: “The rules are laid down by the composer, while the generative algorithms constantly and endlessly generate and transform the work without human intervention. Data from the weather satellite are fed directly into the computer pro-gram and used to control the algorithms. In short, the weather conducts the music, but it is the computer that composes it.”

The work thus ranges between Siegel’s inherent fascination with technology which, as the quote at the beginning of the text says, goes all the way back to his early child-hood in LA, and a fascination with the uncontrollable which is generated both through the composer’s algorithms and by incorporating an unstable factor such as the weather.

My interpretation can perhaps be stretched so far as to say that Siegel’s auto-mata are an expression of the world in the anthropocene age in which nature, culture and thus also technology are no longer clearly separate phenomena, but are now considered as organic units where each factor has an effect on another. The com-poser has laid down the rules, but then withdraws and watches how the world he has designed, with all its random events, fortunate and unfortunate, behaves once the algorithm has been set in motion.

Sanne Krogh Groth holds a Ph.D. from the University of Copenhagen (2010). Currently she is a senior lecturer at Lund University researching in performative aspects of contemporary music and sound art of the 20th and 21st centuries. Since 2011, she is editor-in-chief of the online journal Seismograf.