The second symphony of the prize-winning Faroese composer Sunleif Rasmussen (b. 1961) is composed as a life cycle based on the Old Norse myth of the tree of life, Yggdrasil, and carries the title ‘The Earth Anew’. Inspired by natural phenomena and Faroese melodies, Rasmussen is a great believer in a shared Nordic identity, and this world premiere recording bears witness to his strong artistic partnership with Finnish conductor John Storgårds and the Helsinki Philharmonic Orchestra. 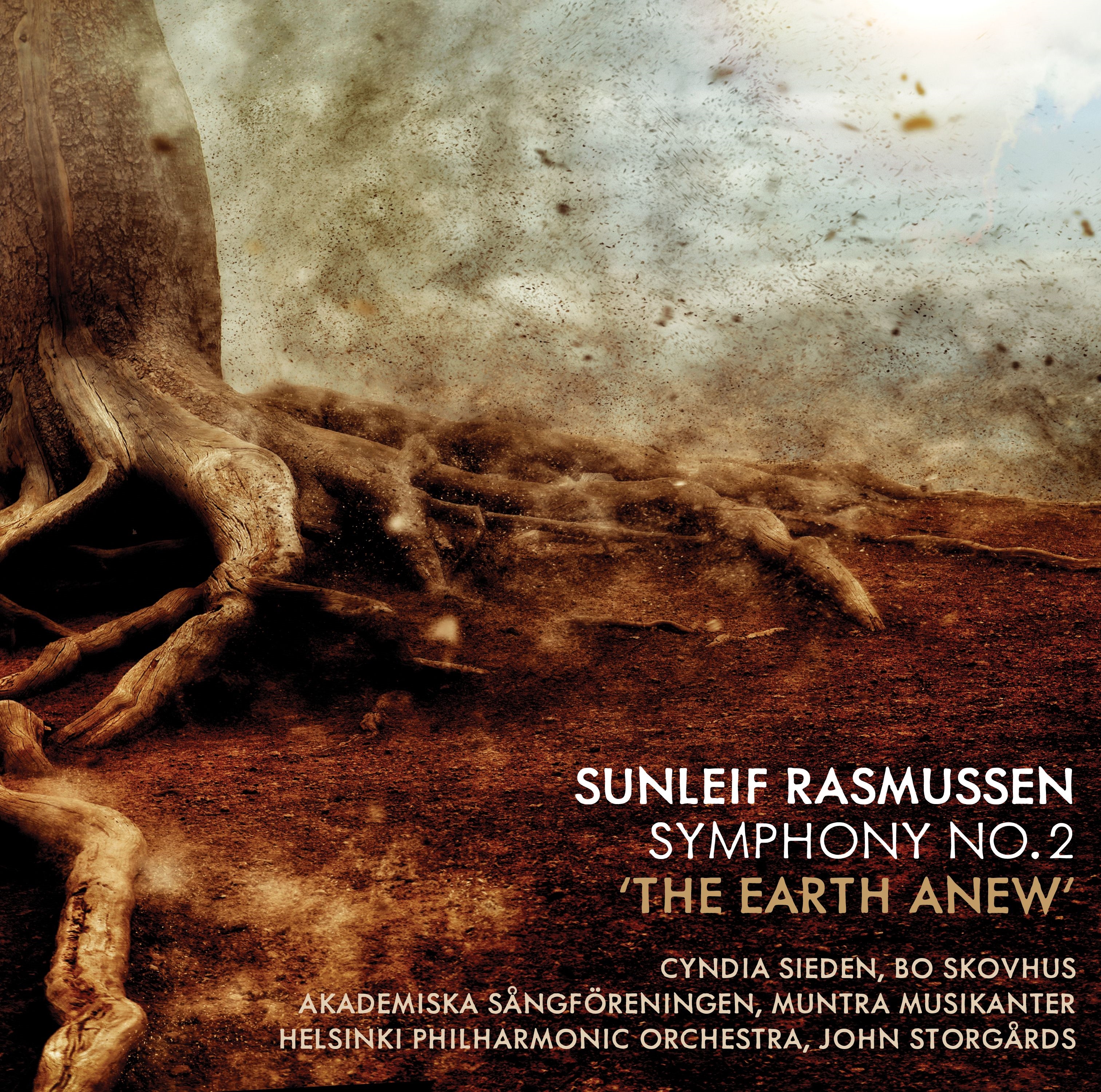 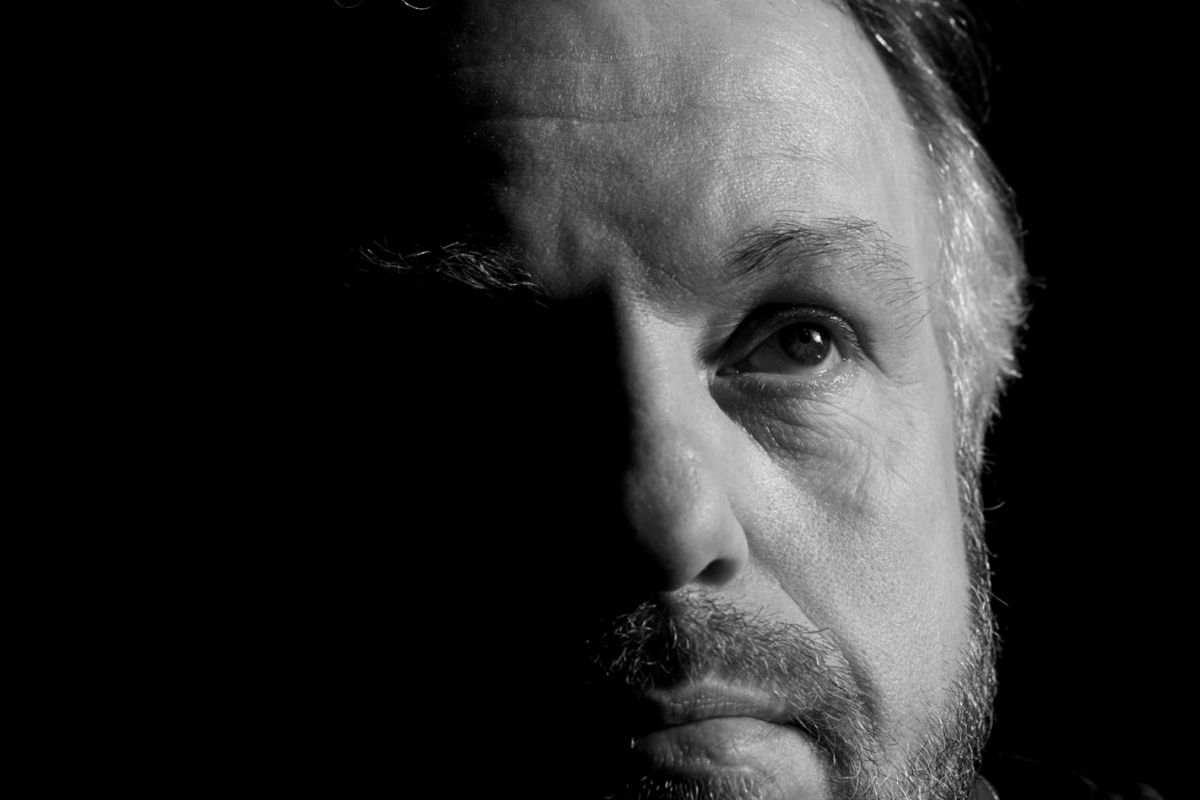 © Lars Skaaning
"Rasmussen is a master of the many timbral possibilities of the orchestra; he is also well-schooled in the symphonic tradition of the 20th century, and in many places he manages to continue this tradition very well"
Nikolaj Strands, SEISMOGRAF
"A dark giant opus, in which the orchestra creaks and cracks like tectonic plates moving, while the music trickles like water and deep notes make their way into underwater caves"
Thomas Michelsen, Politiken
"Monumental in ambition and structure, this work is for all the curious music lovers, who are not afraid to explore uncharted symphonic waters."
Peter Dürrfeld, Kristeligt Dagblad
"Conductor John Storgårds, a zealous herald of contemporary North-European music, knows how to captivate the Helsinki Philharmonic and the choirs, bringing them to a rare degree of accomplishment."
Jean-Luc Caron, Classica
"New music of a very, very high quality in a thrilling performance – and we have Storgårds to thank for both"
Andrew Mellor, Gramophone
"The arrival of soprano Cyndia Sieden and baritone Bo Skovhus near the movement’s close induces goose pimples"
Graham Rickson, The Arts Desk
“Sunleif Rasmussen doesn’t hold back in this large-scale, myth-inspired symphony that ranges from aggressively percussive to otherworldly and downright creepy”
BBC Music Magazine
“Sunleif Rasmussen takes full advantage of the orchestra's potential”
Yvonne Petitpierre, Deutschlandfunk
“The two-decade wait has been worth it, but let’s hope for more from Rasmussen sooner rather than later”
Ben Wilkie, Limelight Magazine
Der altnordische Sprachklang gibt den Vokalpartien eine archaische Tönung
Lutz Lesle, das Orchester
SELECT PREFERRED FORMAT TO DOWNLOAD SINGLE TRACKS.

The sound of the old norse of today

In many ways Sunleif Rasmussen is a pan-Nordic composer. Born in the Faroe Islands in 1961, he has lived in Norway for a period, and today he shuttles between Copenhagen and his native islands. He also has a close association with Finland and Finnish musical life, among other ways through a close friendship of many years with the conductor and violinist John Storgårds; a musical friendship of which the present recording and the CDs Strings against Strings (2007) and Motion/Emotion (2013) are shining examples. Rasmussen speaks more than a handful of the related Nordic languages, and is a great believer in the shared Nordic identity nourished by the common linguistic basis.

His youth did not in fact point in the direction of a life as the absolutely most prominent Faroese composer. There was no musical training on the island of Sandoy when Sunleif Rasmussen was growing up. So he learned to read music from his grandmother. At the end of the 1970s he went to Norway to attend a music college outside Oslo, and it was there that he first heard a symphony orchestra play live – an overwhelming experience, among other reasons because the programme consisted of striking masterworks from the twentieth century: Le Sacre du printemps by Igor Stravinsky and Romeo and Juliet by Sergei Prokofiev. At the same time he drew great inspiration from the great jazz pianist of the time, Keith Jarrett, and the tenor saxophonist Jan Garbarek, and in fact it was as a jazz pianist – with a single CD on his conscience – that Sunleif Rasmussen developed musically in the 1980s. At that time he was back in the Faroe Islands, before moving to Copenhagen in 1988; the next year he began studying composition at the Royal Danish Academy of Music in the capital with Professor Ib Nørholm – and later electroacoustic music with Ivar Frounberg.

Shortly after his studies, in 1995-97, Sunleif Rasmussen wrote his best known work, the first symphony, ­Oceanic Days, for which he received the Nordic Council’s Music Prize as the first and so far the only Faroese to do so. Over the years he has also received grants from the Léonie Sonning Music Foundation and the Danish Arts Foundation, and in 2011, as the youngest recipient ever, he won the biggest culture prize of the Faroes, the Mentanarheiðursløn landsins. His music is played in most parts of the world.

In the works in the 1990s as today, Rasmussen found his inspiration in natural phenomena and Faroese melodies. In the 1990s these melodies were only present in the hidden ­composition work as a basis for serial and spectral principles – where notes and sounds are thoroughly and systematically organized. During the last decade, suggestions or imitations of Faroese folk melodies and rhythms have been far more dominant in his music.

Sunleif Rasmussen’s second symphony with the title The Earth Anew is a big work. In both idea and design. The Faroese composer has composed the symphony as a life cycle based on the Old Norse myth of the tree of life, Yggdrasil, for two vocal soloists, male choir and a large symphony orchestra. Over four large movements, the symphony plays out the story of the tree with its roots in three worlds and its top in the heavens in the Old Norse verses from the Elder Edda written down in the thirteenth century.

The story behind the symphony is that the Helsinki Philharmonic had played Sunleif Rasmussen’s first symphony Oceanic Days – which had won him the Nordic Council’s Music Prize a few years earlier – in 2006, and then a few years ago John Storgårds, then the chief conductor of the orchestra, commissioned a new symphony from him. It was to be performed on the 150th anni­versary of the birth of Jean Sibelius in 2015, to be twinned in concert with the Finnish national composer’s symphonic suite Kullervo, with the same distinctive ensemble and with a text from the Old Norse universe – unlike Sibelius’ work, which makes use of a poem from the Finnish national epic, Kalevala.

The Old Norse aspect defines the whole symphony. The text flows as a constant strand through the four movements, in which the words – whose linguistic essence can still be found in all the Nordic languages – supply both content and expression in the music. As composer, Sunleif Rasmussen has in his own words tried to be as discreet as possible in relation to the content of the myth and simply let it play itself out in all its intense drama. But the sounds of the Old Norse language with their distinctive expressiveness are also music in their own right, giving the symphony a quite special character. And aesthetically Rasmussen has sought out equally powerful expression in a quite different genre which also draws on the ancient Nordic symbolism – the rock genre heavy metal – but in a much more sophisticated version that exploits the great potential of the sonorities of the sym­phony orchestra.

Sunleif Rasmussen has always had a great interest in composing finely dif­ferentiated sounds in his music, and this time, as he says, it has been important to get the rhythmic side into the picture. States and motions.

In the classical world the form of music is far from that of the short songs of rock music. As in the classical symphony the four movements are formed with a statement of the whole in the first movement; then a slow, emotional second move­ment, a pointed third movement and a large, dramatic final movement.

Rasmussen’s fellow Faroese will probably feel a certain familiarity with melodic fragments scattered around. For among other things the remains of Faroese folk tunes underlie the symphony. For example the first chorus in the fourth movement is fairly close to the melody of the Faroese wedding song. Earlier in Rasmussen’s career – culminating in the first symphony 20 years ago – he made a point of disguising the melodies so no one could recognize them. But now in the second symphony he shows his true colours and permits the rich Faroese song culture to become an openly recurring strain in the large symphony.

The myth of the ash Yggdrasil is simple. The tree has roots in three worlds: the world of the trolls, Hell and the world of mankind. At its foot lies the dragon Nidhug, sucks blood from the dead and gnaws at the roots of the tree. In the treetop live an eagle and a squirrel. The eagle is the enemy of the dragon, and the squirrel is the messenger who runs up and down the trunk with his gossip. The myth says that Yggdrasil perishes during Ragnarok and is resurrected in an entirely new world.

That is very precisely the drama that forms the skeleton of the symphony. In the first movement Rasmussen presents the whole drama – and in mini-format in the other three movements – as a bubbling, pulsating tonal painting with a confusion of sounds that alternate between light and darkness. Towards the end of the movement the first two human beings in the world ­according to the Edda, Embla and Ask, appear – as soprano and baritone.

In the second movement the world is created in the soundscape of a primal state where instruments and voices play and sing as low as possible in states close to nothingness. This is an attempt to compose a soundscape that has fascinated Sunleif Rasmussen since his childhood in the Faroe Islands: the extremely deep tone that arises when the waves force their way into the deep caves. Out of this state, the world is born.

The third movement is intricate and dancing – in a way superficial and teasing as a sound-painting of the squirrel in the treetop, running around with gossip, and only held together by two motifs.

The lightness vanishes quickly with the fourth movement, the longest and most dramatic in the symphony. Here the Earth and Yggdrasil perish. The sun turns black, and the land sinks into the sea, as the text says. But about a third of the way into the movement the music grows lyrical and congenial, like the earth arising anew – and in a brand new way. This is the point of the title of the symphony, The Earth Anew – the ‘rawness’ that prevails when life is destroyed, but also the far more conciliatory music when something new arises and the myth of Yggdrasil becomes an image of the basic human condition.

Symphony No. 2 'The Earth Anew’ is commissioned by John Storgårds, Helsinki Philharmonic Orchestra and the Nordic House in the Faroe Islands, with support from the Danish Arts Foundation and the Wilhelm Hansen Foundation.