The five works on this CD offer a broad perspective on the Faroese composer Sunleif Rasmussen (b. 1961), who continues to be inspired by the elements of nature as well as drawing on a wide range of idioms, periods and styles. In the virtuoso playing of the ensemble Aldubáran, the listener can hear lyrical echoes of traditional folk music, Baroque structures and electronically manipulated sounds, as Rasmussen combines the seven instruments of the ensemble in a wide variety of configurations. 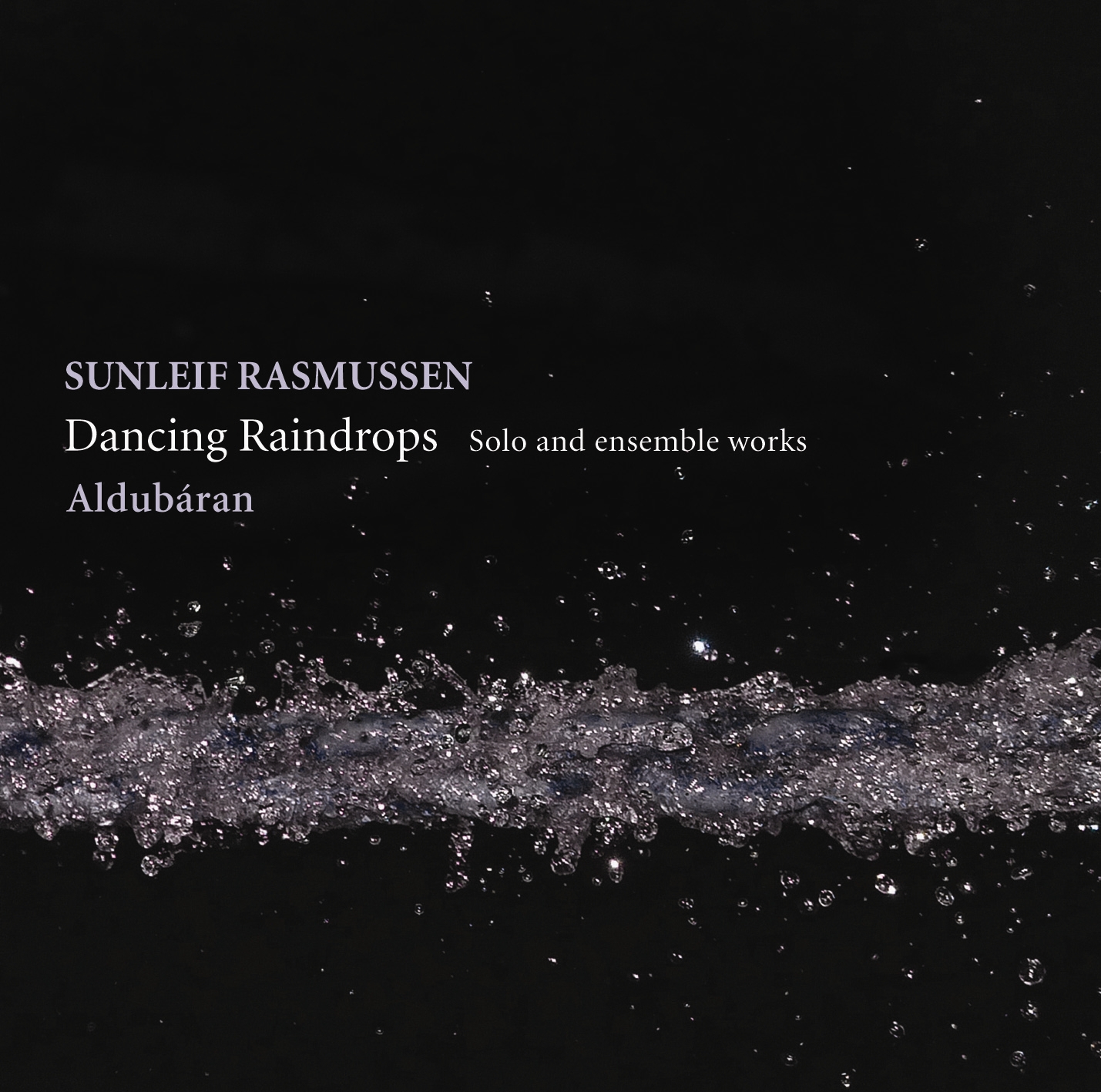 Faroese composer Sunleif Rasmussen was born on Sandoy - ‘the sand island' - in 1961. In terms of his own priorities, the stress on nationality is important if one wants to approach his music and understand its background. At all events the Faroese aspect - the colonial history, the yearning for freedom, the language, the songs and the culture - fills most of the self-portrait that he put into writing in 2002 when he received the greatest recognition ever awarded a Faroese composer: the Nordic Council Music Prize for the symphony Oceanic Days.

Sunleif Rasmussen's musical idiom is Faroese, too. Deep within the structure lie traces of old Faroese songs which Rasmussen has collected, broken down and rebuilt into a modern store of musical material. Material that one can quite reasonably say is both his own and new - but which at the same time has a relationship with tradition and history. The Faroese landscape, however, seems far more of a presence in Rasmussen's music.

His youth in Sandoy with the omnipresent Atlantic, the dunes, the lyme-grass and the gales - perhaps not unlike the conditions on the west coast of Jutland in the autumn - seems to explain much of the highly sensual musical experience one can get out of Sunleif Rasmussen's music. But all the national baggage can also seem superfluous. Much as his music may recall the rushing wind, it can equally recall the music in the environment that Sunleif Rasmussen was a part of at the Royal Danish Academy of Music in Copenhagen at the end of the 1980s. His contemporary Bent Sørensen, formerly professor of composition in Copenhagen, or one of the most important figures of twentieth century music, György Ligeti, are people with tonal idioms and ideas for music that just as definitively resemble Rasmussen's.

Sunleif Rasmussen has written orchestral works, solo concertos, chamber music, solo pieces, electroacoustic works for tape and for live electronics as well as a great deal of choral music. His scoring and ideas are often untraditional and take into account the venue where the music will be performed, sometimes defining the placement of orchestra musicians between the audience, or an item on a concert programme is preceded by excerpts scored for a few musicians who play it in the foyer before the concert. His music has been performed by ensembles throughout the world, including New York, Berlin, Paris, London, and Helsinki.

In 2004 he was visiting composer at the Korsholm Festival in Finland, where his violin concerto Songs of Seasons was premièred by Ostrobothnian Chamber Orchestra and John Storgårds. In 2006 the première of his opera The Madman's Garden took place in Tórshavn, and has since been followed by performances in Tallin (Estonia) 2008 and at the Arts Festival in Reykjavík (Iceland) 2009. In 2009 he was commissioned to write a work for the 100th anniversary of the Faroese capital, Tórshavn, resulting in a large scale cantata combining many elements of Faroese music life such as choir, classical and rhytmic musicians as well as the traditional Faroese chain dance.

In recent years he has had two recidencies: in 2008-2009 with the South Jutland Symphony Orchestra for whom he composed Prelude to an Orchestra and a recorder concerto, Territorial Songs, premièred with Michala Petri as the soloist; and in 2009-10 with the Danish vocal ensemble Ars Nova Copenhagen and Paul Hillier who premièred Gylfaginning for choir, narrator and effect processor, leading to a new commission for Paul Hillier's ensemble Theatre of Voices, namely a work for solo quartet of voices and string quartet.

In 1992 he received grants from the Leonnie Sonning Foundation and from the Danish Composers' Society. In 1997 he was awarded a three-year grant from the -Danish State Arts Foundation, and in 2002 the prestigious Nordic Council Music Prize. As the youngest person so far he received the Faroese Cultural Prize of Honour in 2011.

Dancing raindrops can clearly be heard in the virtuosic chamber playing in the first work on this CD. Water is the theme which connects the work with the Symphony No.1. The music is not bound by any traditional form: a fast first movement, a calm middle movement, followed by a lyrical thematic winding-up in the third movement, ending with an abrupt final-cut\. We are not talking about common musical forms, and yet: the first idea, which the music returns to several times, is reminiscent of a fugue but without conforming to the traditional melodic or rhythmic steadfastness. We hear an incessant change, which is repeated, and as such is the pattern for the work, which dissolves into lyricism at the end.

Suite for guitar appears to be a musical echo from the Baroque age. The composer uses the same movement names and order as the French and German Baroque composers did in their solo suites. Baroque instrumental music can be likened with a rapid tide of ‘soggetti', themes that do not end as defined by the rules of form, but rather by themselves as all possibilities are exhausted. Præludium is an echo of this - with added rhythms that shift the emphasis all the time. In Allemande and Courante there is a definite current of sound distinctive of the artistic dance music, a precise ensemble between guitar and effect. The musical statement of the Sarabande reminds us of the old style, but we also hear a dissonant blanket of sound behind the pure music of the guitar. The Gigue is obvious dance music, characterised by virtuosic guitar playing and effects.

Andalag #2 is the second of several proposed works for wind instruments. The title ‘Andalag' is in fact composed of two faroese words ‘andi' and ‘lag'. ‘Andi' meaning either spirit or breath, whilst ‘lag' means melody, layer or mood. The title Andalag has connections with one of the first works by the composer, but apart from the title there is little musical affinity between the two. In -Andalag#2 we are in the musical environment of Symphony No. 1 \\Oceanic Days\\, especially when taking into account Sunleif Rasmussen's ideas and use of echo-harmonies and shadow-harmonies. The musicians dazzle with virtuosic playing in close dialogue and changing roles - effervescent music which can also be lyrical.

Like The Golden Sun is a significant work. Not only is it a work that introduces electronics to the composer's repertoire, but the musical process curiously changes throughout the work, and several performance techniques are introduced, for instance the piano is used as a harp. The sound emerges with gradual changes to several parameters simultaneously. The sound of the piano is dominant in the first movements; we hear a stuttering chorale - the composer's mantle for the song, ‘As the golden sun breaks through'. The theme travels upwards towards the last movement, ‘The immortal fountain of light brings a precious drop of eternity to our mortal eyes', where the electronic part becomes ever more present as the music develops.

Mozaik / Miniature consists of fragments from Symphony No. 1, here scored for chamber ensemble. The piano theme which begins this work can be heard a few minutes into the Symphony, played by a solo clarinet. It is perhaps the inspiration of folk music which gives this work a particular feeling of concert intimacy, which continues until the end as the music dissolves in glissandi and spatial sonorities.

On the whole, the works on this CD give a broad representation of Sunleif Rasmussen, a composer who stretches extensively in expression, time and style.

Dacapo and Aldubáran acknowledge, with gratitude, the financial support of the Faroese Ministry of Culture, The Nordic House in the Faroe Islands, Mentunargrunnur Landsins, Fjølrit and Tórshavn Municipality Special thanks to Stephen Wilkinson and Oddfríður M. Rasmussen