This album presents works by the Danish electronic music pioneer Else Marie Pade (1924–2016) in her hitherto unknown role as an orchestral composer. Although these orchestral works number only a few, the artistic weight and the quality and integrity she brings to them provide ample reason to challenge her established image as a composer of only electronic music. 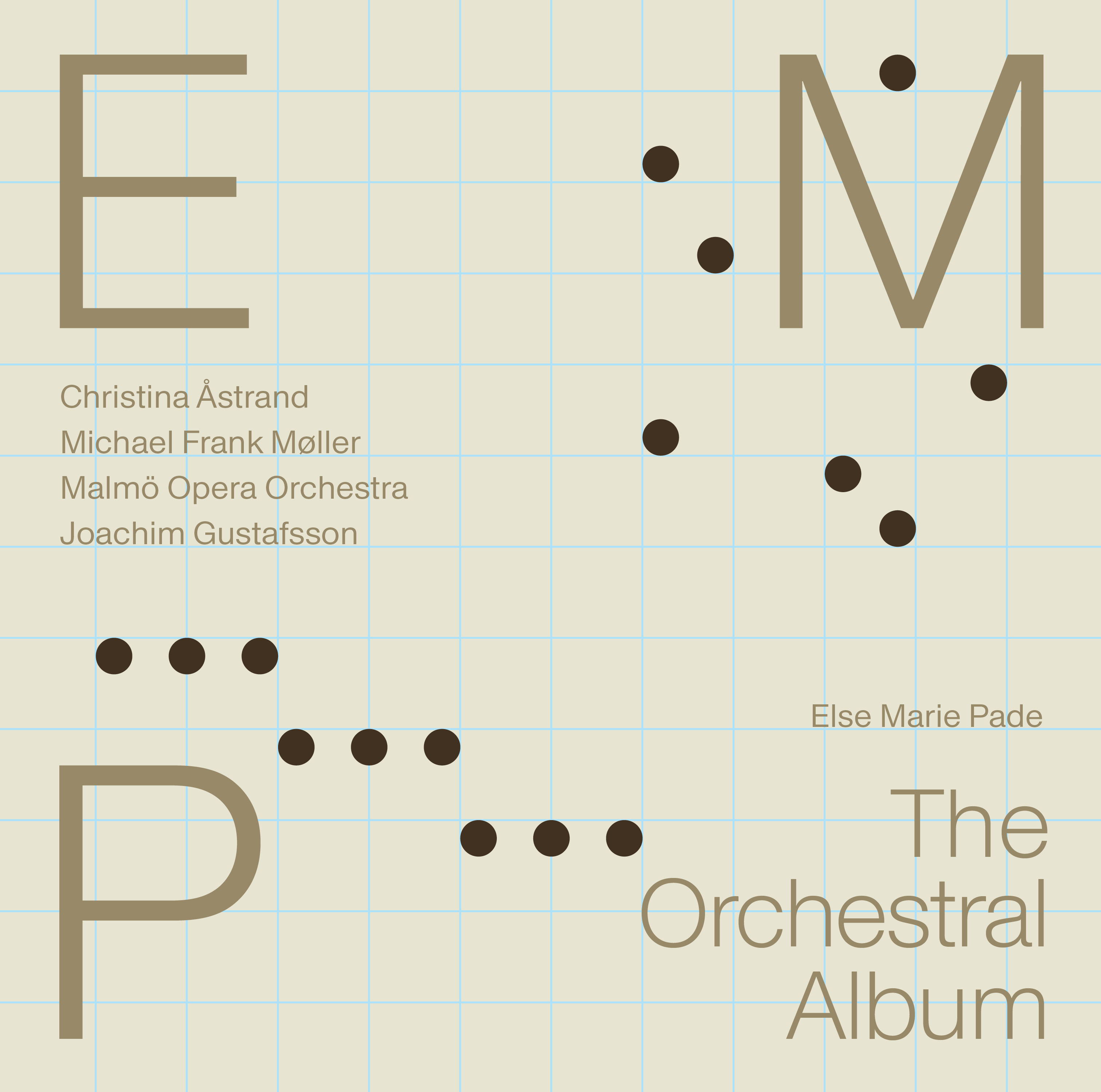 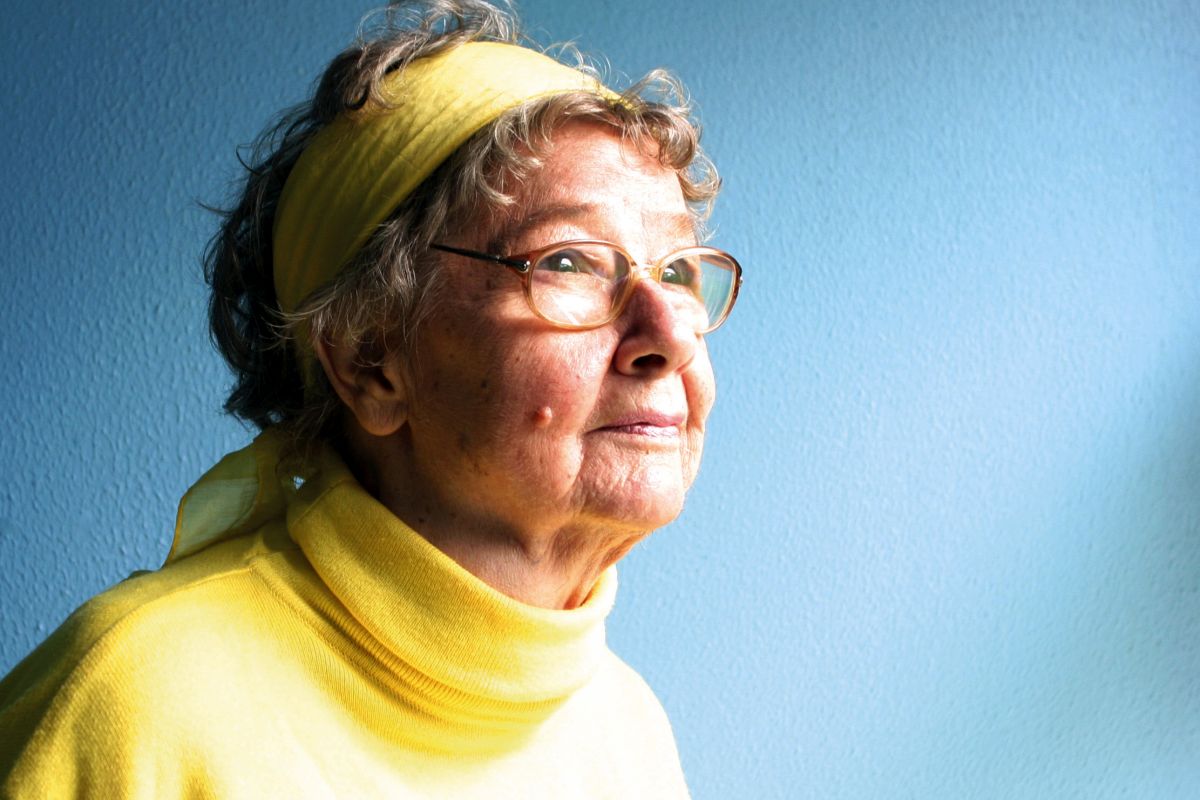 A Composer Surprises for the Second Time: The ‘Acoustic’ Else Marie Pade

The release of the four orchestral works on this album is no less than a small sensation. They show Else Marie Pade (1924–2016) in a hitherto unknown role as a composer of orchestral works which have an integrity and quality which will, in future, make it just as legitimate to speak of her as an ‘acoustic’ artist as it has been to speak of her as an ‘electronic’ composer. Even though we are only talking about a few works, their artistic weight gives us a welcome opportunity to challenge the established image we have of her.

In 1950, Else Marie Pade took her diploma examination in piano at the Royal Danish Academy of Music in Copenhagen, and immediately began taking private lessons in composition and instrumentation with Vagn Holmboe, Leif Kayser and Jan Maegaard, the last of whom helped her to internalise her ability to think in tone rows (in the twelve-tone system). But she felt herself isolated from the predominantly conservative climate which characterised Danish musical life. Despite a certain interest in the musical thinking of Carl Nielsen and Jean Sibelius, her own orientation was, unusually for a Danish composer, towards the continental European style. She was also separated from the ordinary way of things by her gender: she was and remained a strange bird in Danish musical life.

Several of Pade’s electronic works have the character of works of mourning which, in different ways, are based on traumas from her experience as a woman who had resisted the German occupation. She had been imprisoned by the Gestapo, and spent eight months in captivity in Frøslevlejren (the Frøslev Camp). The autofictional character of these works is difficult to trace in the orchestral works, perhaps with the exception of the violin’s closing solo passage in Étude, which might be associated with the sound of sirens or falling bombs. It is as if the material of these works depends on other points of focus.

These wartime connections could explain why Pade never, on her own initiative, talked about these orchestral works in interviews or conversations. The probable implication of this silence is that she accepted that it was her electronic and ‘concrète’ works which people wanted to hear about, as well as her time in the Danish resistance movement. On this account, she dismissed the orchestral works, which had hardly been heard by anyone, and which only existed as entries in the catalogue of her works.

But now that the works recorded on this album have been made available, the situation is quite different. They will, hopefully, come to contribute to our understanding of the composer in the future: in that sense, Else Marie Pade surprises us again, though she is no longer alive. We are tempted to ask: what will she come up with next time?

When this writer, together with Ingeborg Okkels, drew a portrait of Else Marie Pade for Dansk Musik Tidsskrift (Danish Music Review) 2001, we remarked that her electronic and musique concrète works were ‘characterised by an almost childlike urge to tell stories, a particularly playful tone and a basic mood of something on the one hand very remote and dreamy, on the other abyssal and crushingly present.’ These words could be applied equally well to these orchestral works. In this sense, there is continuity rather than fracture between the ‘acoustic’ and the ‘electronic’ Else Marie Pade: she made, in these works, a music which is related but which works through quite different means.

Étude (1965) brings to mind an almost Ligeti-like sound world, where everything stands delicate, fragile, luminous – and static. The long-held high note of the solo violin in the introduction to the work is an expression of this. But the work also explores alternatives to Ligeti’s aleatoric strategies in its last two movements, reinforcing the impression that Pade was working almost as if she were several composers at once.

Étude – which should not be confused with Pade’s 1962 electronic work with the same title – is divided into a series of movements, each of which has its own characterisation: ‘Infant’, ‘Cheerful’, ‘Dreamy’, ‘Dynamic’, ‘Choleric’, ‘Mild’, ‘Painful’ and ‘Yearning’. Few of her contemporaries would have agreed with Pade’s use of this unproblematic one-to-one correlation between directions and their performance, but it was quite characteristic of her to not feel that she should ask permission, or not do something she thought was right.

The work is characterised by humorous elements like the solo violin’s frequent use of glissandi through several movements but especially the choleric one, whose name could be a nod to Carl Nielsen’s Second Symphony, The Four Temperaments (1901–1902). The glissando technique became fashionable around 1960, not least with the entry of Krzysztof Penderecki to the international scene. Else Marie Pade may well have seen the technique as a sonic realisation of the curve of the sinus tone, a fundamental element in the electronic music of the time.

In this as well as in other ways, the musical building blocks of the work seem to be electronically experienced: there are sounds which could not have been made without an intimate knowledge of, and preference for, the ways in which electronic material manifests itself. Ligeti in particular had similar experiences in his only two electronic works, Glissandi (1957) and Artikulation (1958), which would come to shape the emergence of the micropolyphonic sonic texture of his works in the 1960s. According to the conductor Joachim Gustafsson, Étude also points to Tristan Murail’s L’Esprit des dunes (1994) and Gondwana (1980). Murail has, like Pade, written both electronic and acoustic works, and in the latter draws on experience from the former.

The score of Étude prescribes the spatial arrangement of the musicians in which the conductor and soloist are at the centre, surrounded by the orchestra. When this way of performing the piece, intended for a concert situation, was tried out in the recording studio, it proved, according to Gustafsson, to function ‘incredibly well’; its success contributed to unlocking the composer’s intentions. This can be seen as an expression of how carefully thought through the work’s means of expression were, and of how much the practices of electronic music meant to Pade: the concept for the work’s arrangement of musicians points back to Karlheinz Stockhausen’s experiences in this field, with which Pade, as a close follower of his music, was intimately familiar.

Parametre (1962) for string orchestra is a thrilling, expectant work in which fairly frequent glissandos meet in pointillistic passages. In the first movement, however, the atonal language is sometimes short-circuited by a recurring tonal statement in the form of a diminished fourth, creating a mischievous tonal confusion.

The work contains a considerable level of humour with sounds which might be described as intrusive yawns or small, graceful grunts. It is like a kind of night music in the manner of Mahler or Bartók, music which has the night or the late evening as its setting, which suggests here that someone is about to go to bed.

Humour or not, Gustafsson said that the second movement of the work was one of the most complex pieces of music that Pade ever wrote, or that he ever conducted. In that sense, it points back to the legacy of Pierre Boulez, a contemporary of Pade who shared the same complex Darmstadt ideal, and had attended a number of the annual Darmstadt courses from 1962.

Sept Pièces en couleurs (1953), with its musical explorations of seven different colours, provides associations with the synaesthetic composition method used by, amongst others, Alexander Scriabin. It is a dense, dark work with musical references to impressionism. The slow introductory movement, in particular, shows that Else Marie Pade could have driven it further as a symphonist if she had not, at the time when she was writing it, been so engaged with the electronic sound world that she changed direction. That a piece written with this musical approach could still emerge sounding relatively traditional may be because composition was relatively new to her at that time.

A characteristic of the work is its use of rhythm as a central but minimalistic applied parameter. The third movement, like another Boléro, pursues a short, repeated passage, led by the timpani, with repetitive sound material which is developed from near inaudibility towards an ear-shattering climax which gradually fades. The unsettled sixth movement also stands out, with its apparently ‘neutral’ motif derived from the four notes of a major seventh chord.

The many abrupt small motifs in the work bring a number of Carl Nielsen’s works to mind, while the ascending and descending major scales in the fifth movement could be a reference to the opening of Jean Sibelius’ Seventh Symphony (completed in 1924). But the piece is clearly working on its own premises, which point away from a Nordic ideal. According to Gustafsson, Sept Pièces en couleurs sounds as if it was written by several composers, so different are the movements aesthetically as well as compositionally. In this sense, the work is a reminder of how different the colours we take for granted really are. That the work, with its use of a seven-note tone row, points directly towards the same use of a row in the electronic work, Seven Circles (1958) shows precisely the close connection between the acoustic and the electronic domains in Else Marie Pade’s musical thinking.

The Concerto for Trumpet and Orchestra (1954) was probably the first orchestral work ever written by Else Marie Pade. It came into being over an extended period, and the date given therefore merely indicates the time of its completion, not its composition. The piece is written in the twelve-tone style, but is characterised by a relatively conservative instrumentation. There are unusually explicit references to Carl Nielsen’s Fifth Symphony (1920–1922) in the prominent snare drum and to Gustav Mahler’s Fifth Symphony (1901–1902) in the trumpet part in the first movement, set against a few jazzy trumpet sounds. In this way, Pade invites the world in, so to speak, though it is not entirely clear what she will do with them.

The concerto was dedicated to the Danish National Symphony Orchestra’s distinguished principal trumpeter, Knud Hovaldt. It was planned that the concerto should receive its first performance by the orchestra in 1957, but the plan did not come to fruition. Pade explained in an interview: ‘When the orchestra’s solo trumpeter […] went home to […] try the solo part, he sat down on the floor and roared with laughter that it was me that had written for the trumpet.’ Such sexist prejudices were not unusual for her in that decade, which leaves the dedication to the trumpeter rather compromised.

With the launch of these recordings, it is now possible to present Pade’s music in the concert halls alongside other music so that her work now stands equal to that by men. In a time whose focus is on balancing the strongly male-dominated orchestral repertoire, these works offer an opportunity to reduce the imbalance in the repertoire and to present something as rare as works from the 1950s and 1960s that were written by a Danish woman.