Music is life, and like life itself, music is inextinguishable,\ said the Danish national composer Carl Nielsen (1865-1931). Raised in the Danish countryside as the son of a poor folk musician, Nielsen's indomitable courage and infinite curiosity helped him develop into one of the greatest symphonists of the 20th century. With this new series of recordings Nielsen crosses the Atlantic, as the New York Philharmonic and their music director Alan Gilbert shed new light on his uniquely Nordic symphonic sound.\\\ 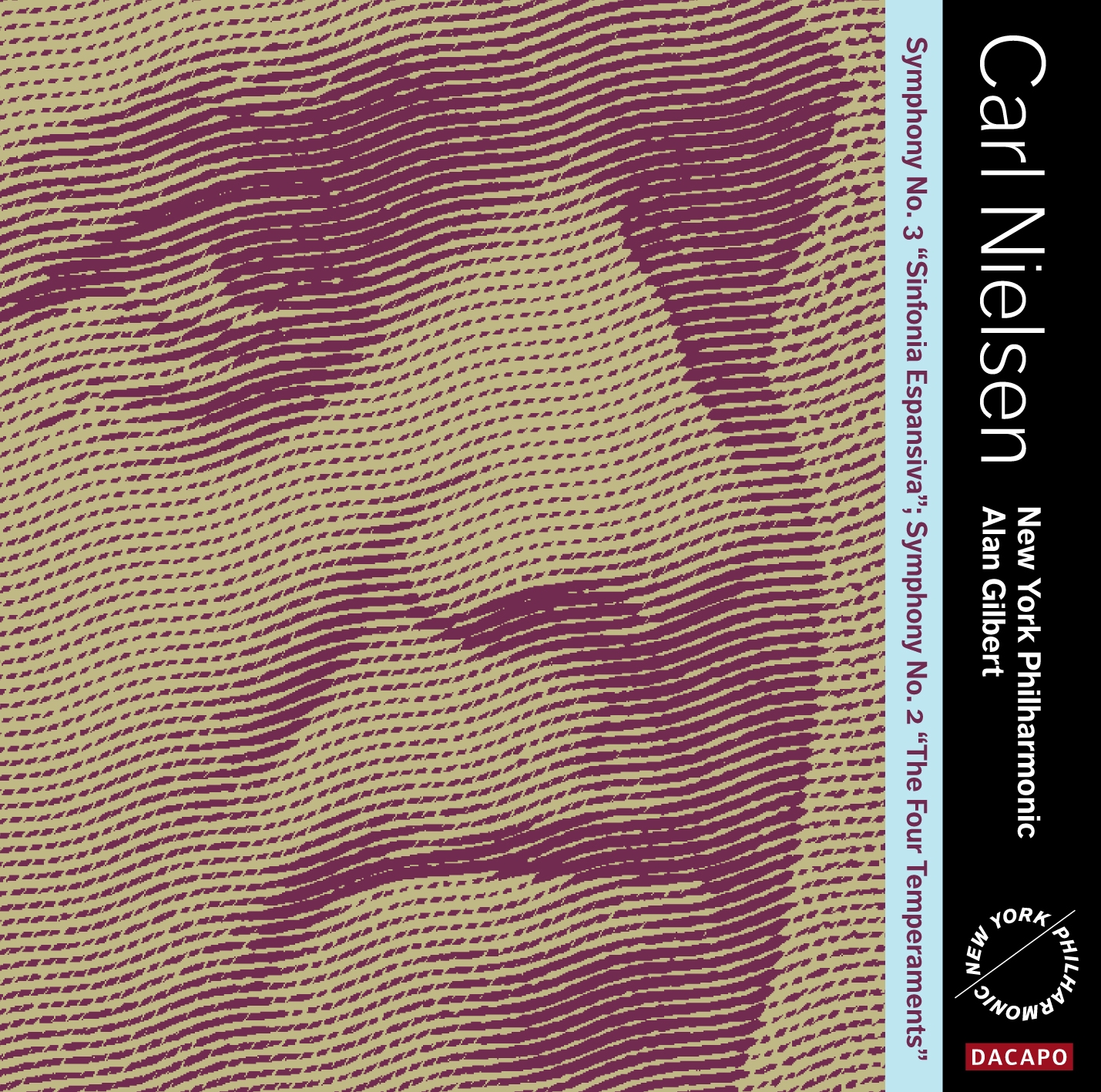 Little Carl was given his first violin lessons by his father, who was a painter and village musi­cian. The family, with its many children, lived in a village community a few kilometres south of Odense, the principal city on the island of Funen. Immediately after his Confirmation, Carl was apprenticed to a grocer, but the grocer went bankrupt. At short notice he competed instead, as the youngest applicant, for a position as a regimental musician in Odense. With support from private benefactors in Odense he went on from there to the Royal Danish Academy of Music in Copen­hagen, where he studied in the years 1884-86. In 1889 he became a violinist in the Royal ­Danish ­Orchestra at the Royal Theatre, where the principal conductor, the Norwegian composer Johan Svendsen, became a patron of the young musician with his talent for compo­sition, and among other things conducted the first performance of Nielsen's First ­Symphony in 1894.

In 1905 Nielsen resigned from his post in the Royal Danish Orchestra; but the next year he returned to the Royal Theatre, now as a composer, and conducted his new opera Maska­rade. This led in 1908 to an engagement as conductor that lasted until 1914. After this he had more time to compose, although he conducted the concerts of the Music Society in the ­period 1916‑27 and at the same time was associated with the Academy, first as a teacher and later as a member of the board. Finally he became the director of the Academy, but this was in the year of his death, so he was unable to leave an enduring mark on its activities. ­Today Nielsen stands, around the 150th anniversary of his birth, as Denmark's most important composer, whose works are performed all over the world.

A decade passed between Carl Nielsen's Second and Third Symphonies, the very decade in which the composer consolidated his dual national status. In the longer term this was to make him so frustrated that he was no longer able to keep up the facade when he was acclaimed as a national icon in connection with his sixtieth birthday in 1925.

Nielsen had by then become Denmark's most frequently performed symphonist, outside as well as within the borders of the country, but at the same time he was the composer whom the Danes loved for his popular ‘national' songs. Although he himself felt no discrepancy between his two composer profiles, he would clearly have preferred that the great birthday torchlight processions and similar symbols of his iconic status had been prompted by his laboriously built-up symphonic prowess, not only by the well-loved Danish songs.

The more trouble one takes, the poorer in fact becomes one's practical situation. What does it avail me that the whole world doffs its hat to me but hurries past and leaves me sitting there with my wares until it all collapses and I discover to my disgrace that I have lived as a foolish dreamer and believed that the more I worked and strove in my art, the better my whole position would be.\

This was how clearly he expressed it in an interview in the major Danish daily newspaper Politiken when he was finishing the composition of his sixth and - as it was to turn out - his last symphony, which was to be given its first performance a few days later by the Royal Danish Orchestra with himself conducting in the very last of the gala concerts held in his honour in 1925.

The Second and the Third Symphonies are both indicative of the dichotomy which throughout most of Carl Nielsen's career coloured his attitude to the concept of ‘programme music'. Both symphonies bear subtitles, \\The Four Temperaments\\ and \\Sinfonia Espansiva\\ respectively, which cannot but give the listener the impression that this is programme music. Nevertheless, Nielsen tried repeatedly to write his way out of the idea that the Second Symphony in particular was programme music. When he was asked shortly before his death for a programme note in connection with a performance in Stockholm, he wrote in his introduction to a detailed account of the individual ­movements:

\\I must be permitted to emphasize that my remarks must in no way be viewed as a programme. The art of music cannot express anything at all conceptual, and the remarks below must therefore be conceived as a private matter between the music and myself\\. But if this was indeed a private matter, why share the remarks with a concert audience? Nielsen's argument must be said to form part of what the American musicologist Lewis Rowell has aptly characterized as \\Nielsen's homespun philosophy of music\\. Homespun too we must probably call Nielsen's own characterization of the third movement, which in correct Italian should properly have been called Andante malinconico. Fortunately neither one nor the other instance of the homespun need stand in the way of the listener's pleasure in the music.

The theory of the temperaments arose far back in antiquity with the Greek Hippo­crates around 400 BC, and was later developed by the Graeco-Roman physician Galen. It posits that there are four temperaments, one of which is more or less dominant in each individual. Nielsen's inspiration for depicting them symphonically came from a coloured picture that hung in a Zealand country inn where Nielsen and his wife had gone in for a beer during an excursion with some friends. Which inn this was, and exactly when the visit took place, no one has yet succeeded in demonstrating, so it will probably forever remain the composer's little secret.

It appears that Nielsen had already begun working on the symphony before he had completed his first opera, Saul and David. It is no longer possible to determine how great the overlap was. At all events he did not finish the work until the last moment. He end-dated the symphony on 22nd November 1902, a good week before the first performance in Copenhagen with the composer himself conducting.

The very next year after the first performance, Nielsen conducted The Four Temperaments in Berlin in a concert organized by the composer Ferruccio Busoni, to whom he also dedicated the work when it was printed in 1903. During Nielsen's lifetime the symphony was performed in a number of European countries, but was also given a single overseas performance, in Tokyo, where the Japanese Tasaki Tsuda conducted it in a concert in October 1930.

Whereas the Second Symphony had its programmatic subtitle right from the beginning, the Third Symphony did not yet have a subtitle when Nielsen conducted the first performance at a composition evening in Copenhagen on 28th February 1912, in which the Violin Concerto, composed immediately after the symphony, was also premiered. But by the time of the next performance, which took place exactly two months later, Nielsen had promoted the character designation of the first movement to the subtitle of the whole work. This was incidentally not just any performance, for through his friend, the Dutch composer Julius Röntgen, he had been allowed to conduct no less an ensemble than the Concertgebouw Orchestra in Amsterdam.

This concert was to be the starting shot for the work's European success story, which in Nielsen's lifetime included performances in capitals such as Stockholm, Helsinki, Paris and Berlin. Japan too heard this symphony, since the young Danish conductor Charles Lautrup, whom Nielsen knew and encouraged, was for a period a conservatory professor in Tokyo, where he took the opportunity to conduct the symphony in 1928.

It was for the above-mentioned Amsterdam performance that Nielsen wrote his most detailed account of the Sinfonia Espansiva, meticulously describing it movement by movement, with a succession of music examples. He wrote of the pastoral second movement that it depicts \\peace and calm in nature, interrupted only by the voices of a few birds, or what you will [...] Towards the end the rural calm and depth grows rather more concentrated (E-flat major) and from afar off one hears human voices; first a man's and later a woman's voice, which once more disappear, and the movement ends in entirely unemotional calm (trance).\\

Nielsen does not reveal here that he had in fact composed this movement in two, or perhaps more accurately three, tempi. We can see in his still-preserved pencil score that it was originally a purely instrumental movement. Then in the final section he added the two vocal parts with the following underlaid text: \\All thoughts vanished. I lie beneath the sky.\\ Then in the end he decided to omit the text.

Of the final movement Nielsen writes: \\The composer wished to show the healthy morality inherent in the blessing of work. Everything progresses steadily towards the goal. The main subject is used much and the character of the movement is maintained with as much zest and energy as possible.\\

Precisely this hymn to the joy of work is presumably the closest Nielsen ever came to building a bridge in the above-mentioned conflict between his popular Danish songs and the symphonies. It is perhaps exactly what makes it even more sensitive to tempo than so much else in this symphony - a fact of which Leonard Bernstein, one of Alan Gilbert's very famous predecessors in the position of music director of the New York Philharmonic, was made all too aware in 1965 when he came to Copenhagen to record Sinfonia Espansiva with the Royal Danish Orchestra. The studio recording was made under a certain pressure of time, and in it Bernstein painted the joy of work with perhaps too broad a brush. But in the gala concert in the Odd Fellow Palæ that concluded his brief, intense visit to Copenhagen, he fortunately hit on a not much quicker, but certainly more energetic pace.

Technical developments in the half century that has passed since then have made it not only possible but desirable to combine the recording and concert situations; all the more so if the concert programme in question is played several times, as the New York Philharmonic now does, with the resulting potential for eliminating the small accidents which, despite the best will in the world, can always happen where people are involved. And finally, we must presumably remember that no one becomes the head of an orchestra in the absolute international top rank without a general ability to hit the mark in his or her interpretations, not to mention perhaps sometimes quietly moving the mark towards a place where we habitual listeners had not discovered that the mark could have stood with equal justice.

The recording team of TimbreMusic wishes to thank Lawrence Rock, audio director of New York Philharmonic, for his support during the productions.