“Ruthless but innocent – like a child playing with dynamite.” Thus wrote the Danish press at the first performance of Carl Nielsen’s Symphony No. 1 in 1894. This acclaimed recording cycle by the New York Philharmonic and Alan Gilbert shows Denmark’s national composer as one of the wildest and most dynamic composers of early modernism. On this CD, Nielsen’s impressive symphonic debut work is combined with the epoch-making Fourth Symphony, “The Inextinguishable,” written in the midst of the First World War and during a stormy period in the composer’s private life.

“A thrilling demonstration of a sensibility balanced between Romantic and Modernist … An occasion to celebrate for Nielsen lovers everywhere.” The New York Times 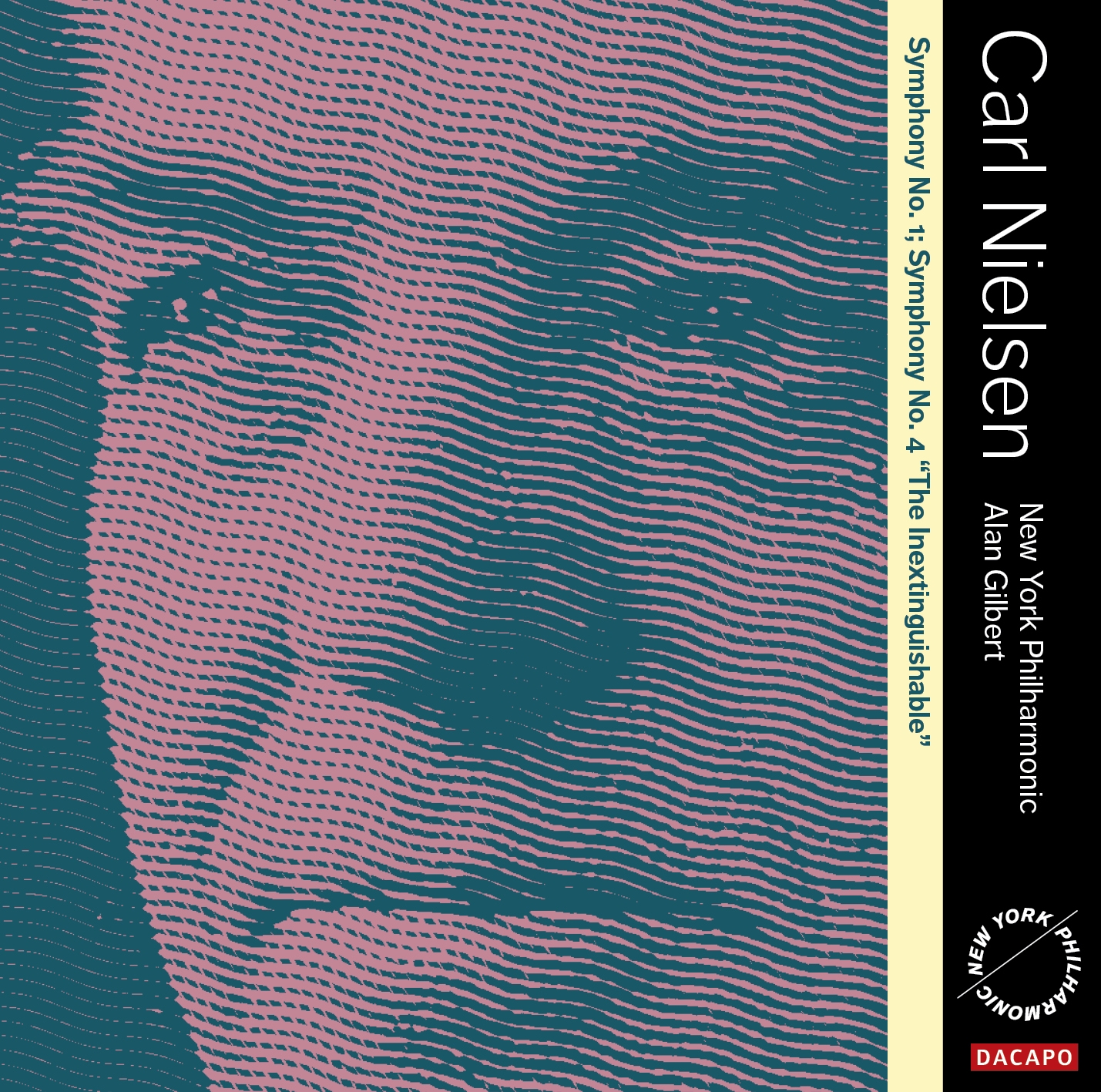 Ruthless but innocent – like a child playing with dynamite. This was how Carl Nielsen’s Symphony No. 1 was described in the Danish press after the first perfor­mance in 1894.

The formulation drives home the unorthodox features of Carl Nielsen that make him such a unique composer: the polarities of tradition and the modern, popularity and experiment, the playful and the brutal. If you appreciate this com­plexity you have the key to one of the wildest and most dynamic composers of early modernism.

While Carl Nielsen’s music comes from the periphery of Europe, it is quite in its nature that the New York Philharmonic and its Music Director Alan Gilbert are now positioning it in the globalized throng of humanity that is the USA. That the music is full of Nordic features does not mean that it is chilly. There has to be full steam on the boilers, for Nielsen’s music has great physical energy and must be played without pulling any punches. “I think it’s really full-blooded, passionate, dramatic and ultimately human music. That’s what I’m going for, and that’s what the Philharmonic is good at,” says Alan Gilbert.

After living in Scandinavia for some years Alan Gilbert knows the roots of the music. “Carl Nielsen’s music is based on classic Germanic traditions, but it’s just so Danish! Strong, beautiful and independent,” he says.

So what are the origins of this music? Throughout his life Carl Nielsen stressed his roots in the countryside. Born in 1865, the son of a village painter and folk musician on the island of Funen, he grew up in poverty. He was taught to play the violin and trumpet by his father, who also took him along to a local music society, the only place in the surroundings where one could hear some classical music.

The family could not afford to pay for an education, so at the age of 14 Carl Nielsen got work as a regimental musician. The wages were a few coins and a four-kilo loaf of rye bread. But in the Danish provinces people felt a sense of implied inferiority when local talent went to waste. So benefactors in Odense clubbed together to send the boy to Copenhagen (as had happened to his fellow-townsman Hans Christian Andersen a few generations earlier). Nielsen was admitted to the Academy of Music as a violinist, and in 1889 he won the competition for a permanent position in the Royal Danish Orchestra. In just ten years he had progressed from hopeless poverty to the cultural elite of the capital.

Carl Nielsen was part of a development in society where the rural population emerged as the body and soul of democratic Denmark. The capital was full of Nielsens, Jensens and Petersens who arrived in a wave of enthusiasm about the future. The anaemic and delicate was to be replaced by the wholesome and bold. Bricks rather than marble. Wholemeal bread rather than cream cakes. And often with an admixture of zestful, wry humour. As has been pointed out, Danish music is rarely 100% serious, and Carl Nielsen clearly represented the attitude that you have to laugh – not least at yourself. Once you have seen photos of the composer’s droll look, you know that side of him was fundamental to his personality.

Carl Nielsen had only composed three short works for orchestra when he wrote his First Symphony in 1891-92. The writing progressed slowly, but what he gradually got down on paper promised well: “The other day I composed a subject for the second section of the symphony,” he wrote to his wife. “Nor have I ever been so moved as on the night I wrote it. I had cold shivers up my spine and well-nigh made myself ill with emotion.”

Nielsen had support from his conductor, the Norwegian composer Johan Svendsen, who promised to give the symphony its first performance when it was finished. This happened in 1894, and Carl Nielsen himself sat in the orchestra when the symphony was played for the first time.

From the first chord of the symphony Carl Nielsen skips the conventions. This was not National Romanticism, the local standard fare, which had stiffened into clichés (in Nielsen’s words “6/8 time in minor, plus Danish stewed pears”). Instead we meet a strapping fellow who expresses himself in short phrases and with power­ful breaths. The music is classically formed, but quite literally ‘rude’, partly because Carl Nielsen did not yet have a fully polished technique, partly because he was try­ing to break free of these same academic standards.

The urge to escape, even from something as fundamental as the relationship between major and minor, seems like an instinct in him. In Symphony No. 1 it is done not through sophisticated late-Romantic harmonies, but like ornaments curl­ing around the strong melody lines. It is a musical version of the Danish Art Nouveau style, with its slightly rustic arabesques; and at the same time an artistic variant of the tonal lawlessness of folk music, a kind of ‘Danish blues’.

When Nielsen elevates such ambivalence to a basic principle, the symphonic ground plan explodes. The symphony ends in a different key from the one in which it begins! In fact from the first chord it pulls in the direction of C major, away from the main key of G minor.

In the final movement the battle between the two forces flares up, but in the second movement, too, major and minor are on rocky ground. Here the pastoral idyll of the music grows organically, in a tonal idiom that is all Nielsen’s own, into a nature-religion revelation of light and landscape.

For the listeners of the time it was obvious right from the initial axe chop of the symphony that something unusual was happening in this music. But they were not quite sure whether what they heard was magnificent or just odd. The hard-boiled music critic Charles Kjerulf almost went amok – with enthusiasm: “A work from which there already flashes a summer lightning of talent and which seems to promise a coming storm of genius. Unsettled and ruthless in harmony and modula­tion, yet all so wonderfully innocent and unconscious, as if one saw a child play with dynamite. And what is most important: genuine and with no pretence what­soever from start to finish.”

Carl Nielsen was fortunate in that over the years the works of his youth continued to be played. His First Symphony was thus not forgotten, although the composer surpassed himself with his subsequent works. Sixteen years after the first performance he noted: “This work now lies far back in time ... but has always remained close to my heart because it is very individually felt, indeed in reality far too individually for a symphony.”

Far too individual – that is not a criticism that would be voiced today, when it is precisely the strength of will that makes Carl Nielsen’s G minor symphony one of the best symphonic debut works ever.

Symphony No. 4, “The Inextinguishable”

In 1905 Carl Nielsen left his position in the orchestra to concentrate on composing and conducting. He had a major popular breakthrough in 1907 with his socially aware song Jens Vejmand (“Jens the Roadmender”), but as a concert-hall composer he long remained controversial and only met general recognition in the 1920s. By the time of his death in 1931 he was a national figure, and his funeral in Copen­hagen was worthy of a king.

Nielsen took one of his great steps with his epoch-making Fourth Symphony, the first performance of which he conducted himself in 1916. This was in the midst of the First World War, and although that disaster remained outside the borders of neutral Denmark, it is reasonable to hear the intense music as the sound of war. New insights into the composer’s stormy private life have also made the symphony sound like an evocation of the dramatic separation from his wife Anne Marie that took place just when it was ­being ­composed.

Carl Nielsen’s own explanation moved on a quite abstract plane. He saw the symphony as an expression of the eternal will to life that is most strongly mobilized just when it counts most. In an early draft he formulated his thoughts thus: “I have an idea for a new work which is to express what we understand by Life Urge or Life Expression – that is, everything that moves, that has the will to life. No particular idea of anything ‘magnificent’ or anything ‘fine and delicate’ or warm or cold, just life and motion, yet different, very different, but within a context, and sort of constantly flowing, within one great movement in one flow. I must have a word or a short title that says this; that will be enough. I can’t properly explain what I want, but what I want is good.”

Carl Nielsen had built up his first three symphonies from individual move­ments, but from the start he planned the new Symphony No. 4 as one uninterrupted process. When the symphony was finished, he could at last formulate the definitive, highly Nielsenesque words he was looking for: “Music is life, and like it inextin­guishable.”

Carl Nielsen expresses ‘the inextinguishable’ through what he described as a “dip right down to the layers of the emotional life that are still half-chaotic and wholly elementary.”

This makes the symphony an overwhelming physical drama. The first move­ment begins with a ‘Big Bang’ that casts all its particles out into space with no clear idea of what they will gather into. A slow, descending theme in thirds in the woodwinds seems like a relief, but develops surprisingly into the symphony’s inextinguishable victory motto.

The next section is in stark contrast, a simple Allegretto whose naive micro­cosm has an innocent aroma of the Rococo. A gnawing worm in this idyll leads to a rupture, and the symphony’s intense third section is a recitative monologue filled with despair.

Out of the darkness a flame finally shoots up – a short, inciting toccata played by unison strings con anima. This leads into the climax of the symphony: the last section with its violent duel between two timpanists. This timpani duel becomes a musical fist-fight with rending sounds commented on by the terrified surroun­dings. The effect is chaotic, but the victorious theme from the first movement wins the upper hand in the end. The symphony ends in some of the most ecstatic music Carl Nielsen ever wrote.

In this war of the worlds, the inextinguishable is the victor. For, according to Nielsen’s view of life, it cannot be otherwise: “Life is indomitable and inextingui­shable; the struggle, the wrestling, the generation and the wasting away go on today as yesterday, tomorrow as today, and everything returns.”