Written to mark the completion of Bára Gísladóttir’s studies at the Royal Danish Academy of Music, VÍDDIR was first performed in and with the vast acoustic of Grundtvig’s Church in Copenhagen in February 2020. From its first sounds of five bass flautists screaming, ‘as strong as possible’, into their instruments, it is clear that VÍDDIR is not a light-hearted leap into a new life. It is a black night of a piece. An abyss, into which Gísladóttir has dived and reached deeply. An unbroken hour in length, it returns again and again to its own dark light. Recorded live at Dark Music Days, Hallgrímskirkja, Reykjavík, 2022 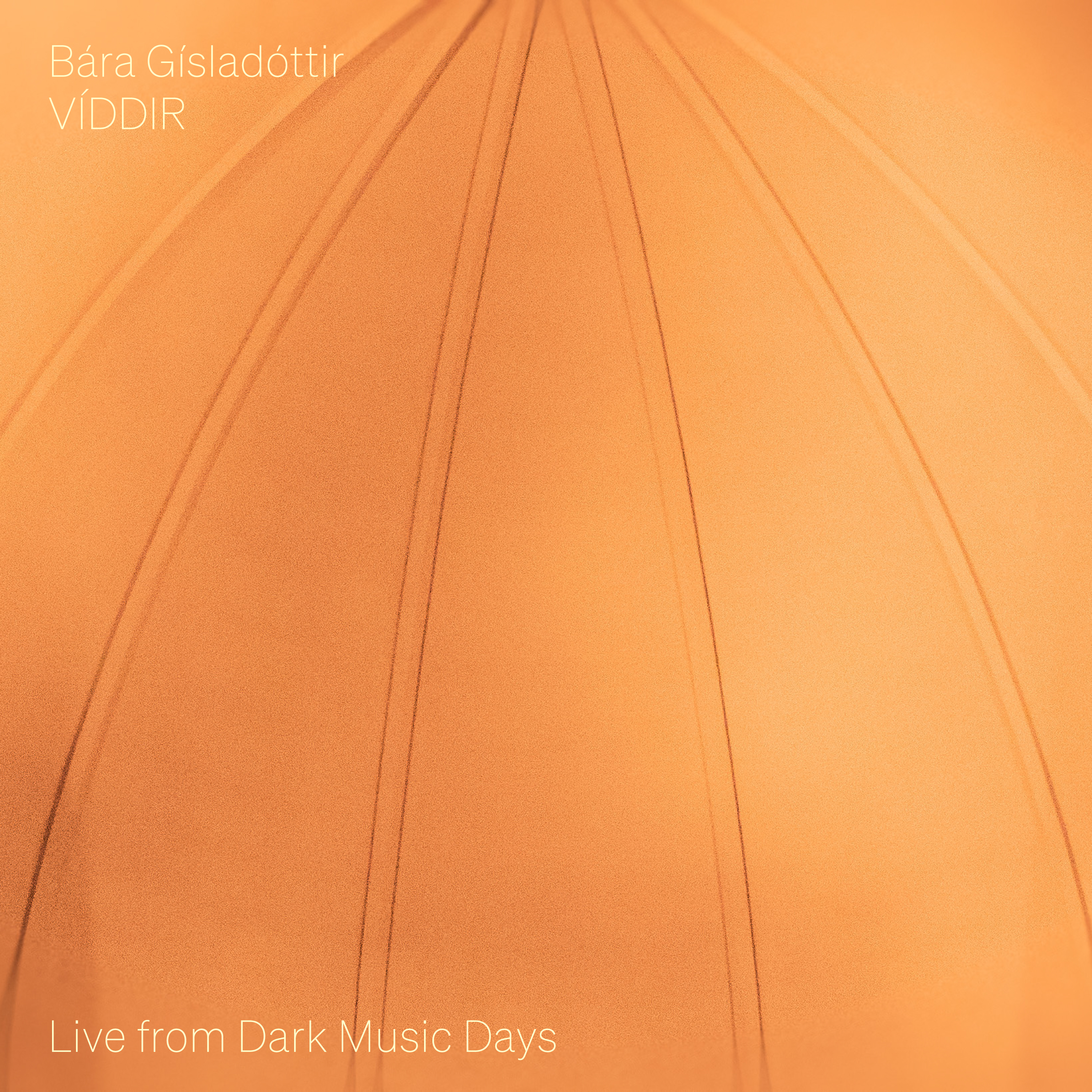 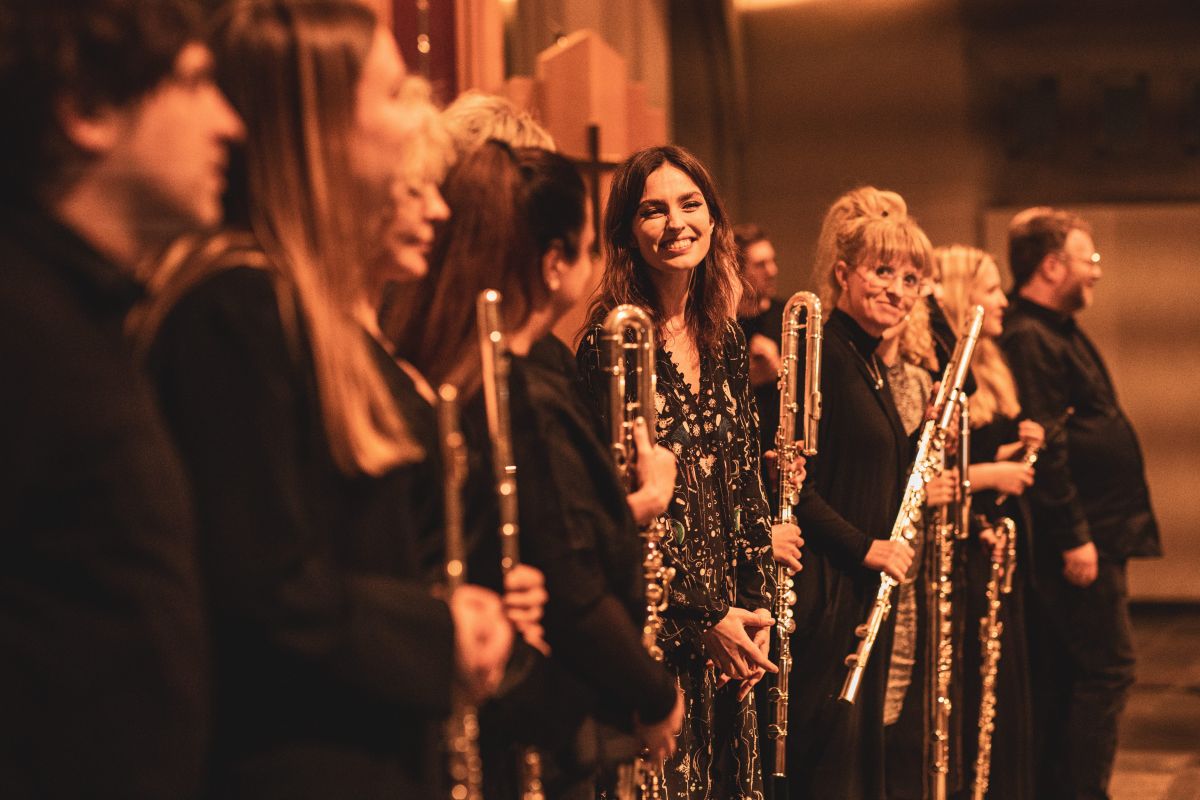 VÍDDIR for nine flutes (led by Björg Brjánsdóttir), three percussion and acoustic and electric bass soloists (played by Gísladóttir herself and renowned Icelandic bassist Skúli Sverrisson). Written to mark the completion of Gísladóttir’s studies at the Royal Danish Academy of Music, VÍDDIR was first performed in and with the vast acoustic of Grundtvig’s Church in Copenhagen in February 2020. Two and half years later, in the small hours of the morning, I sit in the blue-grey glow of my laptop, adjust my headphones and press play.

From its first sounds of five bass flautists screaming, ‘as strong as possible’, into their instruments, it is clear that VÍDDIR is not a light-hearted leap into a new life. It is a black night of a piece. An abyss, into which Gísladóttir has dived and reached deeply. An unbroken hour in length, it returns again and again to its own dark light.

The critic Andrew Mellor, who attended VÍDDIR’s premiere less than a month before the toxic hurricane of Covid tore through Europe, writes in his book, The Northern Silence, that VÍDDIR’s ‘primeval rumbles and judders appeared as snapshots of a bigger process, one whose naturally recurring cycles don’t begin or end. Or didn’t, until humanity got involved ... The performance had felt less like a warning than a prophecy – rationally Scandinavian in its assertion that the demise of humanity was a done deal; darkly Icelandic in its willingness to examine, in sound, precisely what that might entail.’

If that was all, VÍDDIR would already be worth our attention. But, as its Icelandic title – ‘Dimensions’ – suggests, it is much more than that. The first dimension is space, expressed through the work’s staging. The nine flutes are arranged in a silver halo around the audience: a gleaming event horizon past which sounds are no longer in the players’ control but are given up to the acoustic of the space. In the centre, the two bassists form a dense, occasionally explosive nucleus alongside the three percussionists, whose instruments are dominated by more metal circles: Chinese opera gongs, crotales, temple bowls and more. The whole arrangement is an expansion of these: a giant circular instrument whose sounds collapse in from its edge to its middle before being reflected, inexorably, back out and beyond.

The second dimension is sound. Each group of instruments is expanded in some way: acoustic bass with its amplified double; flutes multiplied across the registers from bass to piccolo; and the percussion trio of endless chimes and bells. Rainsticks played by the percussion link the granular hiss of gongs and flutes. Two chamber organs, played by the percussionists, form a bridge between the three instrumental groups, their stops pulled halfway out and then pushed back and forth to create sustained but distorted sounds reminiscent of electronic music. In their distortions and doublings, every instrument forms an axis that intersects with every other. And all of them sink and dissolve into the stone walls of the church.

The final dimension is time. VÍDDIR is a work whose music does not take place so much in the moment as in its aftermath, in its reverberations. Although it has since been performed in other buildings (as it is on this recording), the acoustics of Grundtvig’s Church are so central to the work’s conception that Gísladóttir considers the building an unnamed fifteenth performer. As sounds are made, they fade and bloom into that resonance. In the broad pools that open up as the music breathes, Gísladóttir and Sverrisson fill the spaces with improvisation. These are the darkest points in the piece, into which solid matter is sucked and atomised. They are marked in the score with graphics, which the players can interpret as they wish. Appropriately, the first – from approximately 7:35 to 16:45 in this recording – is written as a fine mist of dots; others are spots of light on a black background, or the visual noise of glitching pixels. But it is in these black holes, where even time seems to vanish (in the score they are marked out not in beats or even seconds, but minutes), that an exit is found. Here, in the work’s deepest hearts, the percussion gleams like coal. Three giant tam-tams – ‘the biggest we can find’, asks the score – provide the shattering climax to an already shattering piece. For fifteen minutes afterwards, a single bass flute (Björg Brjánsdóttir) surveys the wreckage, humming, howling and eventually sinking into the void, taking everything with it.

‘Eventually VÍDDIR did end,’ writes Mellor. ‘It came to rest, like Tapiola, on a tranche of distinctive light – not so much the warm glow of forest safety as the white light of general annihilation.’

At my desk, as the sun rises and the sound of flutes dissolves in the air, I stand and stretch. I close my laptop and step out of the room. It is time to live.