Erik Kaltoft
Gunnar Berg (1909-1989) was a pioneer of serialist music in Denmark. He was the first Danish composer to attend the famous summer courses in Darmstadt and his meeting with composers like Honegger, Messiaen, Stockhausen and Boulez confirmed his personal experiences changing away from the classicizing style of his Danish predecessors. This CD features Gunnar Berg´s work Éclatements, a perfect example of his atonal music that is both colourful, complex and full of explosive energy. Berg never managed to complete his work, which is presented in its full length for the first time on this release.
Buy album 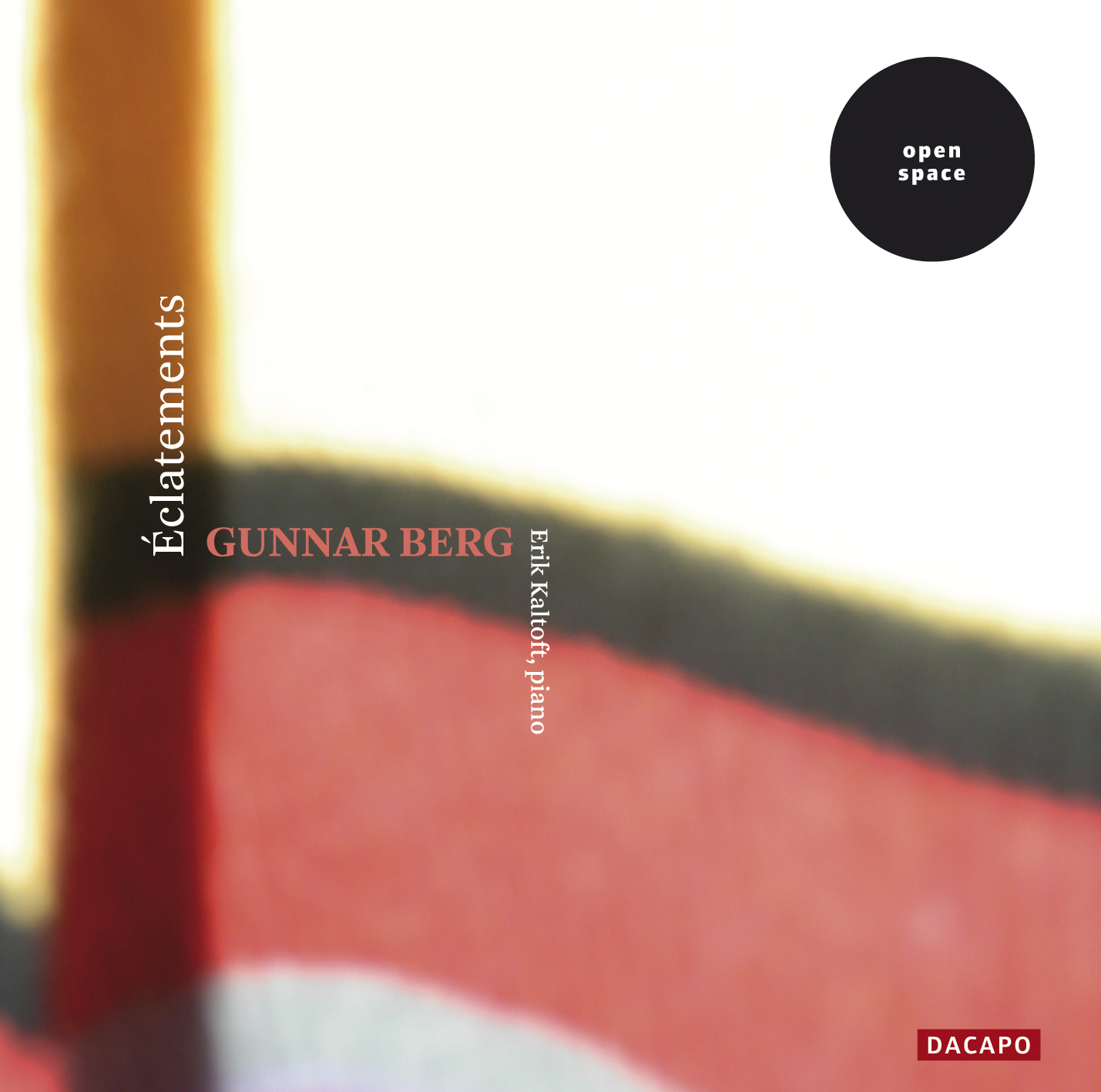 Gunnar Berg was born in St. Gallen, Switzerland, on 11th January 1909 to Danish-Swedish parents. A few years after the death of his father in 1914 his mother went to Austria with three of the children. The 5-year-old Gunnar remained in Switzerland because of a serious asthmatic condition, until he had to go with his mother and the other children in 1921 to Copenhagen, where he was placed in a children's home. After his confirmation in 1924 he was sent to Davos in Switzerland, and from there, via a short stay in Paris, he returned to Copenhagen in 1928. There he was awarded a grant to study at the School of Commerce; but music took more and more of a hold on him, and a performance of Wagner's Tannhäuser at the Royal Theatre in Copenhagen in 1931 became a watershed experience. In 1932 and 1935 he attended the Salzburg Festival; in 1935 he was given access to Bruno Walter's and Arturo Toscanini's orchestral rehearsals and attended Herbert von Karajan's Bruckner course.

In January 1936 Gunnar Berg was admitted to the Royal Danish Academy of Music in Copenhagen, but he left again after the discontinuation of teaching there at the end of the year. He then studied piano with Herman D. Koppel, and for a period frequented the composer Herbert Rosenberg. Of the greatest importance to Gunnar Berg's musical development, however, were his piano studies in 1944-47 with Elisabeth Jürgens.

Gunnar Berg's first works are from the mid-1930s - the piano works Fantaisie and Toccata-Interludium-Fuga and Ti japanske træsnit (Ten Japanese Woodcuts) for song and piano after Hokusai's famous woodcuts One Hundred Views of Mount Fuji. In the piano suite Feldspath from 1943-44 he conducted his first real experiments with form, sonority and rhythm and with a static principle of composition: the repetition of a figure in ever-changing ‘lightings'.

During the war Gunnar Berg was active in the resistance. On 12th January 1945 he was presented in a concert at the Odd Fellow Palæ, and in August 1945 he went on a tour to eleven Red Cross camps in Jutland where he played Beethoven, Schumann, Chopin, Claude Debussy, Béla Bartók, Arthur Honegger's Sept pièces brèves and his own piano suite Feldspath.

On 24th January 1947 at the young composers' society DUT he and the singer Jolanda Rodio premiered Ten Japanese Woodcuts. His music was in general not particularly well received; nor was his Piano Sonata, which he gave its first performance at the beginning of 1948. In the autumn of 1948 he accepted the consequences. With grant support from among others the Danish Composers' Society and the Hjerl Foundation, he arrived on 22nd November in Paris to study in Arthur Honegger's composition class at the École Normale and to attend Olivier Messiaen's analysis courses at the Paris Conservatory. On the way he gave concerts in Karlsruhe in Germany and had encouraging comments about his compositions from the conductor Hans Rosbaud in Baden-Baden.

The encounter with Paris, with new musical idioms - not least Olivier Messiaen's Technique de mon langage musicale and Edgar Varèse's music - made a strong impression and led to artistic collaborations with new people and friendships with musicians and composers like John Cage and above all Jean Étienne Marie. Berg put some of his earlier works behind him or took them up for revision. With Suite for Cello from 1950 he composed his first 12-tone work, and with Cosmogonie from 1952 and Filandre from 1953 he created his first consistently serial compositions, where all the parameters of the music are totally subjected to the serial method of writing.

Several of Berg's compositions were performed in radio-broadcast concerts in Paris, and in a concert of 19th April 1951 at the École Normale the pianist Béatrice Duffour performed his Piano Sonata. The meeting between composer and pianist led to marriage in 1952, and the same year the couple visited the famous summer courses for contemporary music in Darmstadt together. His meeting with Karlheinz Stockhausen and Pierre Boulez confirmed Gunnar Berg in the validity and relevance of his own musical experience, which led in 1954 to Volume 1 of the large piano work Éclatements and the piano concerto Essai acoustique. A number of concert tours and radio recordings took the couple around Europe, in 1957 with support from the French Foreign Ministry to Germany and Scandinavia with Scandinavian first performances on the programme.

In 1958 Gunnar and Béatrice Berg came to live in Denmark and embarked on intensive concert activities at Danish Folk High Schools, where the introduced the new music - for extended periods they lived at the High Schools in Uldum, Askov and Herning. In these nomadic years they enjoyed great support from Ina and Tage Rossel from Uldum, Ib Planch Larsen from Vejle, Bitten and Aage Damgaard from Herning, the then principal of the Royal Danish Academy of Music in Århus, the composer Tage Nielsen, and Danmarks Radio's head of music at the time, Mogens Andersen. During those years he composed among other works the major piano work Gaffky's I-X and the piano concertos Pour piano et orchestre and Frise.

In 1965 Béatrice and Gunnar Berg moved into the old school at Lindved between Horsens and Juelsminde in Jutland. There they created an unusual cultural venue where the people of the region were often invited to memorable concerts of contemporary and classical music. Béatrice Berg died on 20th May 1976, and in 1980 Gunnar Berg moved to Switzerland, where he experienced a strong response to his music. Gunnar Berg died on 25th August 1989 in Bern, and the couple are buried back in Denmark in Rårup Churchyard, not far from the old Lindved school. The beautiful tombstone was created by the Swiss artist Christine Schär, with whom Gunnar Berg lived during his final years.

Explosions - in black and white

Gunnar Berg's two major works for solo piano - Éclatements (1954-88) and Gaffky's (1958-59) - are both of a size that places them among the most voluminous manifestations in the Danish piano literature in the second half of the twentieth century.

This is music that can at first be difficult to understand, with its complex sonorities and the absence of melody and pulse. But on his death in 1989 Gunnar Berg left a large number of abstract, non-figurative ink drawings, and these may serve as clues to the composer's musical universe as it was played out behind the piano's black and white keys and the black notes on the white paper. As an artist Gunnar Berg registered with both eyes and ears.

The piano collection Éclatements was begun in 1954 in Paris. The title has many meanings: explosions or the bursting of something that is suddenly or violently shattered into smaller parts or opens up, often with a bang. It may be glass breaking, tyres, exploding, a nut being cracked. It may also be an outburst of emotion such as laughter or crying.

For Gunnar Berg the encounter with dodecaphony and serialism in Paris in 1948 and over the next few years was a revelation in his search for a composition technique with which he could realize his musical visions. Several work titles from these years indicate that something new had happened to him in earnest. Cosmogonie (for 2 pianos from 1950-51; Dacapo DCCD 9007), for example, meansan account or theory of the origin and development of the universe\.

If learning a serial composition technique was thus crucial to Gunnar Berg, his meeting with and marriage to Béatrice Berg was just as epochal. Between the composer and pianist there arose a fruitful collaboration which over the years resulted in the two great works for solo piano and four piano concertos - with Essai acoustique from 1954 as a wedding present.

Éclatements is a preliminary study for Essai acoustique - with Éclatement 2 directly interwoven. The tonal material for Éclatements was so colossal in size that Gunnar Berg planned three volumes - cahiers - each with five movements, that is a total of fifteen movements with a combined playing time of about one and a half hours. The genesis of the work was long. The first five movements were finished and written out in score form in Paris in 1954, the other ten were begun at the beginning of the 1960s, and would presumably have remained as tables and columns had not Erik Kaltoft contacted Gunnar Berg in 1980 and got him to resume the work. He was able to fair-copy eight movements before he died, and Erik Kaltoft was responsible for the performance of the whole of Éclatements 1-13 in 1990 in Bern with further concerts in Lausanne, Basel, Paris and Denmark.

Gunnar Berg was not keen on inviting scrutiny of the way he composed, and he only rarely accompanied his music with analytical or explanatory comments. \\My works must stand on their own feet, and they must answer for themselves,\\ he asserted stubbornly.

However, among his posthumous papers there are a wealth of slips of paper with columns of figures and letters, note names, volumes and durations, which grant us some insight into his composition workshop. And they confirm the limited number of analyses of Gunnar Berg's works that have attempted to map out his working method. The point of departure was Olivier Messiaen's division of the twelve chromatic notes of the tempered scale into groups, the so-called ‘modes with restricted transpositions', but expanded to apply to all the parameters of the music. The result is a meticulously calculated structuring of durations, pitches, volumes and instrumentation, which was precisely a major theme in Darmstadt in 1952. Gunnar Berg described the method as ‘static', and he spoke of ground rules where by means of techniques such as mirroring, reversal and transposition he established a basic body of material which he ordered such that he could ‘cut' the individual movements out.

Éclatement 1 opens with a powerful five-part chord played staccato, which explodes into smaller chords and single notes of different durations and descending volumes and then falls calm - only to explode again suddenly in firework-like eruptions that go on and on. The contrast with the static Éclatement 2 is great. Each of the thirteen movements has its own basic character, and the whole work can be experienced as a huge ‘mobile', where every single note and rest has its place and plays its role in a sonically differentiated and extremely complex structure in balance. Where time and space become one.

In general it is worth comparing it with tendencies in contemporary visual art. Gunnar Berg's music - and his graphics - recall the dissolution of the picture into points and the constructivist-abstract formal worlds. The Asger Jorn expert Troels Andersen thinks that Gunnar Berg's graphics belong in a tradition that is primarily demarcated by Paul Klee: \\Whereas Klee drew parallels with the musical and worked with concepts like measure and rhythm, Gunnar Berg goes the opposite way. His drawings are the graphic expression of the musician's and the composer's conceptual world and as such are unique.\\

Recorded at The Royal Academy of Music, Århus, in July 2006