Vagn Holmboe’s three chamber symphonies span the period when the Danish com poser immersed himself in symphonic works; they are a fine demonstration of his preoccupation with the processes of nature and the idea of musical metamorphosis. Lapland Chamber Orchestra and its conductor John Storgårds focus on Vagn Holmboe’s clear musical expression in three major works that have never previously been recorded. 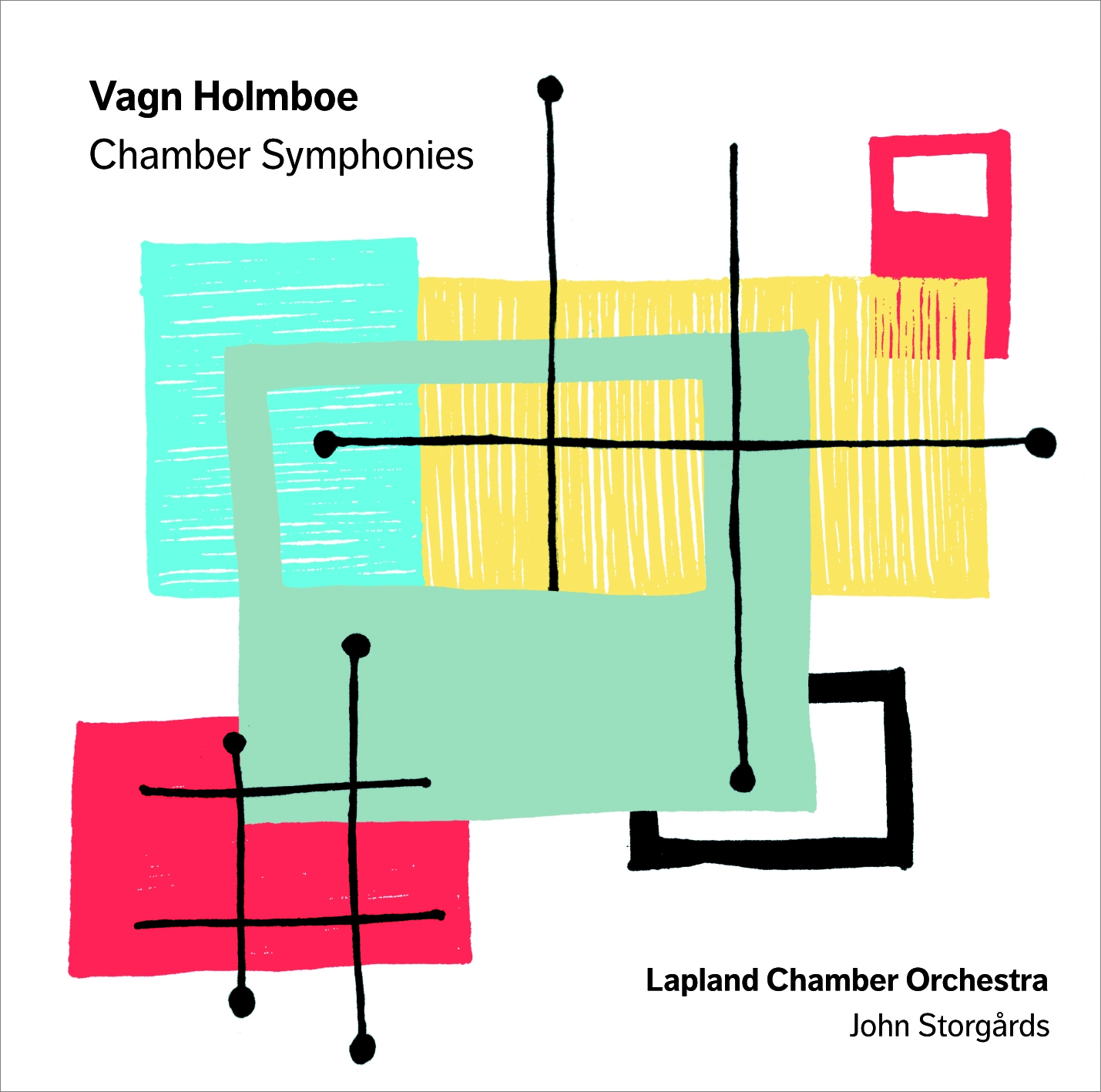 Vagn Holmboe felt that the chamber orchestra format was often fully adequate to his needs. The norm was established with his many chamber concertos from the 1940s, and he used the ensemble regularly, right up to some of his last works, the remarkable Preludes for sinfonietta.

The small ensemble reinforced the distillation of the material, and it suited his own nature - Holmboe came from robust Jutland, which he personified with his sinewy, ascetic physique. His mode of expression may seem reserved or terse, but it is an expression of strong concentration and straightforwardness as well as a humi-lity that gives the music room to grow organically.

By the beginning of the 1930s Holmboe had already composed a large num-ber of works, but had given very few of them the seal of an opus number. His break-through came in 1939, when he won the Royal Danish Orchestra's composition com-petition with his Second Symphony. With the money prize he bought a country property by the lake Arresø in northern Zealand, where he built his home and lived until his death in 1996, and immersed himself increasingly in the flow of nature. His contact with nature was as strong as his link with music, and over the years he planted 3000 trees on his -property with his own hands.

Holmboe wrote hundreds of works during his long life. The works are in all genres; nevertheless there are phases in which particular genres hold his main inte-rest. From around 1950 until the end of the 1960s it is the symphonies that pre-occupy him: symphonies for large orchestra, but also variants like string symphonies (sinfonias) and a form that he called symphonic metamorphoses. And then there are the three works on this CD, the chamber symphonies.

When Holmboe chose to work with symphonies it was in recognition of the legacy of Carl Nielsen, the greatest Danish symphonist, who had adjudicated in his admission examination to the Royal Danish Academy of Music in Copenhagen. At the same time Holmboe was taking a firm stand in the cultural debate of the time. Holmboe liked to emphasize the potential of the symphony to create cohesion and totality. This thought grew in him in the post-war period when, in a torn world, he strove to demonstrate his ideals: coexistence rather than ideologies, nature rather than technology, spirit rather than power.

Through his symphonic work in this period Holmboe developed his idea of musical metamorphosis. The principle is that a theme is mutable and in the end may be transformed into something quite different from its starting point. In Holmboe's thinking metamorphosis was not a form, but a composition technique. He saw it as a counterpart to the life of nature. From egg to larva to cocoon to insect\ was an explanation he often used. On a later occasion he clarified it as follows: \\The meta-morphosis technique is related to many things that slowly seep in through one's life with nature. In this context one experiences a continuous metamorphosis. Perpetual change. The trees, the grass and the weather change and are transformed into some-thing else. Something decomposes and becomes something new. The whole vast process of nature plays a huge role.\\

The three chamber symphonies span the whole period during which Holmboe immersed himself in symphonic works. No. 1 is from 1951 and the last is from 1970. At the same time they are examples of stages in his constant development. When Holmboe wrote his First Chamber Symphony, Sibelius was still alive, and Carl Nielsen's time was only 20 years in the past. In 1970 the time was quite different.

Chamber Symphony no. 1 is pure, unassuming music, a thoroughly classical symphony where the word ‘chamber' refers only to the limited size of the orchestra. The slow first movement functions as a prelude with a pedal point over an intro-ductory timpani roll. The first three notes from the French horn are the small ‘egg' from which the whole symphony grows. The turn of phrase permeates many of the lines that emerge in the greatly varied movements, and this creates a characteristic mixture of contrast and unity.

In the second movement it is the rhythmic play of whirling triplets that comes out most clearly as the music shoots up like a fast-growing plant. The third move-ment is elegiac and begins with a recitative played by unison strings. Here the ‘egg' has been transformed into a fully developed theme. After this the four solo wood-winds take over in a characterful polyphony that clearly shows Holmboe's affinities with Carl Nielsen's style.

The chamber symphony ends in pulsating perpetual motion where the latest transformation of the theme is presented from the beginning. The music grows in intensity, but is broken off at its climax by material from the first movement. The symphony has tied a loop around itself.

Chamber Symphony no. 1 was given its first performance in Copenhagen in 1951 by the conductor Lavard Friisholm, who had founded the chamber orchestra Collegium Musicum a few years previously to play the then neglected music of the Baroque. Holmboe even gave the chamber symphony the subtitle \\Collegium Musicum no. 1\\.

The same year Holmboe composed his large Eighth Symphony, but after that he wrote neither symphonies nor chamber symphonies until 1968. He spent the inter-vening years investigating the metamorphosis technique in freer symphonic forms. How far this took him can be heard in the very rich Chamber Symphony no. 2. The writing is more complex than in the clear, classical Chamber Symphony no. 1, and the music has colours which for Holmboe are unusually mixed.

The new chamber symphony was given the subtitle \\Elegy\\. Since the first chamber symphony Holmboe had undergone a self-questioning - and a confron-tation with his pupils, including Per Nørgård and Ib Nørholm, who around 1960 rejected their teacher's aesthetic and technique in favour of a radical modernism. Holmboe was forced to take a stand. He resigned as professor of composition and retired to the natural surroundings in northern Zealand. There he could remain himself, supported by a lifelong honorary annuity from the Danish state, yet still chal-lenged by the great changes that were happening all around him.

Chamber Symphony no. 2 begins unsettlingly with an ominous ostinato in 5/4 time. Sighing, plangent horns colour the motif transformations of the movement. The utterances of the woodwinds stand isolated and are unable to meet. There is a sombre solitude in this music. Not even a magnificent climax leaves the movement at peace with itself.

In the second movement the uneasiness has led to a confusion of thoughts. Over a swarm of strings and aggressive percussion the winds attempt to find unity. At last a motif forces its way through in the trumpet, but the pulse is too intense for anything but short-term decisions.

The third movement tries to view the problems from a new angle. The strings play muted, and the winds are left alone in the night, isolated with their solos. When the strings remove the mutes, they grow into something highly expressive. They gather in a unison motif that is a transformed version of the trumpet theme from the second movement. The woodwinds respond by weaving their theme together with the string ostinato from the introduction to the symphony - in the course of the meta-morphosis the roles have been reversed.

The fourth movement is an intense Allegro con brio. Now a solution must be found. Belligerently, various themes appear with proposals for a new foundation, but all attempts die out. The ostinato and the horn motif from the first movement seize power as in a coup. The mood grows more and more rebellious until the music stops with a sudden chop and a general pause. The symphony ends in exhaustion after struggling with its pent-up forces. The rage and the grief are a phase that is over.

The next year Holmboe wrote his Chamber Symphony no. 3. The work has a spe-cial history and a peculiar dual identity. For the symphony was written in parallel with the sculptor Arne L. Hansen's (1922-2009) execution of a ceramic frieze as decoration for the Aalborghus Upper Secondary School. Hansen was a close acquain--tance of Holmboe, and his frieze was modelled on the movement names that Holmboe suggested to him. At the same time Holmboe wrote his Chamber Sym-phony no. 3 to the same scheme.

After writing the chamber symphony Holmboe had the unusual idea of doing a version for choir. Material from the orchestral score was transformed into a word-less a cappella work, a \\cantata profana\\ which was given the name Frieze. When Holmboe was asked to write a new work for the inauguration of the school's frieze, he therefore already had the music ready. And at the inauguration both versions were performed.

The next year Holmboe and Hansen similarly collaborated on the chamber work Music for bird and frogs, which was accompanied by a series of lithographs.

In the course of his 20 years of work with it, Holmboe's metamorphosis tech-nique had itself metamorphosed. This can be heard in Chamber Symphony no 3, which most of all resembles a suite of short character pieces. They function as a har-mo-nious diversity rather than as motivically integrated music. Along the way, howe-ver, Holmboe does insert isolated examples of metamorphosis: the first movement has the instruction \\Sereno con variazioni\\ (Serene with variations), and the fourth movement is actually marked \\Grave con metamorfosi\\ (Serious with metamor-phoses). Both movements are intensely concentrated processes where the ideas are linked in a seamless structure. In addition one encounters forms like a dynamic \\first movement\\ (which is in fact no. 2) and a finale (no. 6), as well as the oddest of all movements in Holmboe's chamber symphonies, a little intermezzo with the subtitle \\Chiaro\\ (Clear). Sparser and yet more characterful than ever.